Shoot Boss Microgreens is a small business based in Guelph, owned and operated by Bob Mcguinn. Bob strives to provide locally grown and organic microgreens used for a variety of garnish options for many restaurants in the Southern Ontario region. By meeting the requirements for the United Nations Sustainable Development Goals number twelve, thirteen, and seventeen, Shoot Boss Microgreens helps to increase responsible production and consumption in the community, combat climate change through organic and sustainable farming, and use their many partnerships to achieve their personal sustainability goals. Additionally, Shoot Boss Microgreens sets themselves apart by keeping all their products completely organic and delivering them uncut in order to maintain optimum freshness.

Shoot Boss Microgreens has introduced a variety of methods into their business model in order to support the UN Sustainable Development Goals as well as benefit the community by offering organic shoots to multiple local restaurants. Shoot Boss Microgreens’ methods are directly supportive of Sustainable Development Goal 12: Responsible Consumption and Production, but indirectly contribute to Goal 13: Climate Action as well as Goal 17: Partnerships for the Goals.

Bob operates from seed to delivery. He grows the microgreens himself and then delivers directly to businesses. One major innovation includes Shoot Boss Microgreens having no set “orders” and producing only by demand. This allows him to remain sustainable by saving money as well as keeping his business environmentally friendly. He also is aware of his annual business patterns, knowing what season and time periods have a higher demand for sales. For example, Bob explains that, “ the market is generally very steady. The only thing that would change would be the time of year. It will fluctuate almost 50%, I’ll be twice as busy in the summer. In the winter months all the patios close, people are not eating out as much because they spent all their money on Christmas, so it’s really really slow right now”. Another specific example of an annual trend that he has identified is the higher demand for his product around Valentines Day. This allows him to be responsible with his production of products as to ensure no energy or materials will be wasted through his growing process. He also grows all their products completely organically without the use of any pesticides which again, contributes to responsible production

Shoot Boss Microgreens has many local partners who are all conscious of the food they are distributing as well as their ecological footprint. Through Bob’s many connections in the food industry he is able to ensure responsible consumption in the community by indirectly distributing his products to thousands of people. His growing and distribution methods also contribute to climate action as his products are made to order rather than in mass-production as to conserve energy and money that comes from wasted products. Finally, with his many partnerships with restaurants such as The Bread Bar, Bob is able to collaborate to ensure continued support of the Sustainable Development Goals for both Shoot Boss Microgreens and their partners. 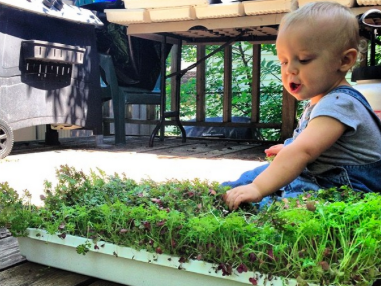 Bob’s inspiration for Shoot Boss came from his kitchen experience. He previously worked at high end restaurants which put him in constant contact with microgreens and information regarding how the industry functions. He decided to take his talents beyond the kitchen and start growing and selling products himself in order to improve his work schedule and salary. To explain his reasoning behind entering this market Bob states in our interview that, “the money was terrible in restaurants. The hours too, I had kids and even though working for myself, I work a lot, I can make my own hours”. He goes on to say “it is easier to have a market that you know about… you know everyone in the industry and it’s hard to sell outside of an industry you don’t know of, so for instance I worked for a bunch of people in town and immediately they all started buying off me, immediately they’re talking to their friends in other cities, and I was interested in growing. Bob took a huge risk in starting his own business but used his relationships with people within the industry to his advantage to ensure he would have enough sales to make a profit. Shoot Boss Microgreens is now a successfully sustainable business that allows Bob to do what he loves while having time for his family, as well as have an overall positive impact on society and the environment. He is now an expert in the farming industry where he has little competition and many customers which allows him to thrive in the community.

Shoot Boss Microgreens’ innovation of seed to delivery impacts both environmental sustainability but also society and the local community. Through the seed to delivery business model the impact on the environment is minimized due to Bob delivering his product himself which cuts down on the supply chain. Rather than having a microgreen farm that sells to a distribution center/wholesaler and then having it move through the supply chain all the way to the end consumer, he delivers straight to his customers. He does do a small amount of selling to wholesale distributors such as Don’s Produce Inc. or 100 km Foods Inc., but only due to the geographical location of his farm in which his small amount of employees does not allow him to deliver to many locations farther than Niagra Falls or Stratford.

Shoot Boss Microgreens not only impacts environmental sustainability but also society and the local community. Bob indirectly through his many relationships with local chefs and restaurants impacts society by increasing responsible consumption throughout the community and the food industry. Bob is also very dedicated to the quality of his products as to keep his customers happy. To ensure quality control of all of his products Bob mentioned that, “I personally goes over every tray as I load it into the packaging. Other than that pretty much everything I use is quality controlled when it comes to me, so even soil is heat treated for salmonella and e coli before I receive it”. When it comes to raising awareness of his sustainable business and the financial and environmental benefits, Shoot Boss Microgreens isn’t involved in specific events to raise awareness, however, he does offer a lot of useful information about his business when asked. For example he has been contacted many times by the University of Guelph for information, as well as donating his time to organizations like Aim2Flourish as to provide information about his continued sustainability.

Shoot Boss Microgreens is able to save a lot of money through its business innovations. Through Bob’s continued experience in growing, his business is able to have little to no wasted products, and therefore no wasted funds. In addition, all Shoot Boss Microgreens’ farming and production of goods is done on Bob’s own land with his own equipment. In our interview Bob states that “When we actually stopped renting all of our equipment and actually purchasing just the farm that really benefited us because otherwise you’re just paying someone else all of your profits to sustain your income. Whereas now I have an income, plus 30 years in the future I’ll have a huge profit”. This allows his revenues to drastically increase because he is not having to spend large amounts of money on renting his required materials.

Shoot Boss has also recently integrated a compost system into their business model in order to recycle products and materials and save money. In our interview Bob explains, “we’re starting a compost system, and realistically the trays that we do throw out, I lose money on it. I lose, let's say two dollars on the soil and a dollar on the seeds. If I compost that I can get the money back, plus it’s not going into the dumpster”. So, through this new innovation Shoot Boss Microgreens is able to save money as well as have less waste. Something unique about Shoot Boss Microgreens is that they only have one employee. Bob goes on to explain that, “for a business this size, you only really need one or two employees and it wouldn’t be sustainable if it needed more because labor is where you’re losing all your money”. With the combination of owning all their equipment and materials required to run a microgreens farm, the integration of the compost system, and having one single employee have all benefited the business immensely and saved them large sums of money.

Shoot Boss Microgreens leverages their social capital through his branding and marketing of his product which creates local awareness amongst his customers and their consumers. He is leveraging both social and environmental awareness by embracing the “Farm to Fork” philosophy of his product. It is widely known that people like locally sourced food that is a healthier choice with low negative environmental impacts.

In general, Shoot Boss Microgreens has many more environmental impacts compared to social impacts. Bob explains that microgreen farming is a lot different than regular farming. He says, “To tell you the truth I don't plant anything in the ground, so as far as the environmental aspects there’s really not that much of a footprint in general. All the soil comes in, goes in trays and then leaves. So, it’s not a normal farm in that way, where you’d be putting chemicals in the ground. I’m selling the whole product with the soil. Most farmers use a ton of different pesticides. I don’t use pesticides or anything”. This is the most unique and impactful innovation that Shoot Boss has added to their business model and really sets them apart from competitors in the farming industry. In addition to this, all the shoots are packaged in cardboard containers and then transported in a reusable plastic tray. Packaging is an area where most businesses fall short in environmental sustainability, however Shoot Boss Microgreens still makes amazing profits while also reducing their ecological footprint.

Shoot Boss has little to no food waste, and anything that is extra product is composted and recycled to be used again in the next assortment of shoots. Bob even mentions that he cancelled his dumpster shipment because there isn’t enough waste for it to be worth the money he would be spending on it. In conclusion, Shoot Boss Microgreens’ business model is extremely sustainable with almost no effort. Bob has perfected his business to make it easy for him to make and save money, while also benefiting the environment and the community.

Shoot Boss Microgreens is a small business based in Guelph, owned and operated by Bob Mcguinn. Bob strives to provide locally grown and organic microgreens used for a variety of garnish options for many restaurants in the Southern Ontario region. By meeting the requirements for the United Nations Sustainable Development Goals number twelve, thirteen, and seventeen, Shoot Boss Microgreens helps to increase responsible production and consumption in the community, combat climate change through organic and sustainable farming, and use their many partnerships to achieve their personal sustainability goals. Additionally, Shoot Boss Microgreens sets themselves apart by keeping all their products completely organic and delivering them uncut in order to maintain optimum freshness.