Improve Life: From Earth to Plate with Less Waste

The University of Guelph Hospitality Services maintains Maclean’s title of best campus food in Canada along with its many sustainability initiatives. They work hard to reuse plates and containers, grow their own produce in an organic garden, and primarily buy locally. Subsequently, their innovations adhere to two sustainable development goals: responsible production and consumption and climate action.

Through interviewing sous chef Andrew Bilyk, it was revealed that the University of Guelph completely changed their business model to support climate action. Firstly, they purchased China plates and metal cutlery for the food courts where there used to be only throw-away containers available. To sustain this, a dishwashing unit and new staff had to be acquired, and this elicited immense expenses. They also introduced a new structure for the use of take-away containers. Rather than throwing them away, students and staff could buy into a system where they were able to return and use take-away containers as they pleased after an initial fee and the University would wash these for reuse. This allowed people to eat their food in other locations in a sustainable manner. There are still throw-away containers available, but they are now priced higher as to deter students from purchasing them. In addition to up front changes, the kitchen staff often try to reuse containers in their own way. For example, they use the containers their potatoes used to come in as pots to grow their plants in greenhouses.

Next, Bilyk explained how the kitchen received its raw produce. There are two organic farms at the University. Each of these uses land outside to grow produce in the summer and greenhouses that are used year-round. These farms run on a system known as regenerative agriculture. This is a method that works to grow the soil as well as the plants which leads to an environment rich in nutrients. Plants that grow and use up one type of nutrient are replaced by plants that help restore that same nutrient to the soil the next year. These types of environments capture and store carbon from the atmosphere. In addition to this, they equal more healthy and nutritional plants for consumers. It is the produce grown here that the University of Guelph uses to feed over 3500 students.

The final initiative Bilyk discussed was the change to purchasing local. This way, there are less emissions through transportation of ingredients and the quality of food purchased can be ensured. As well, they are able to develop close relations with their suppliers. They are then able to request for items to be given less packaging, so they can reduce their waste. By buying locally, other than supporting the local economy, they are also ensuring that their campus is a fair trade campus. To demonstrate, for beef purchases, the University of Guelph uses VG meats, a farming family that values not using antibiotics and being able to trace their meat back to its source. Clearly, this supplier exemplifies the beliefs that the University holds. 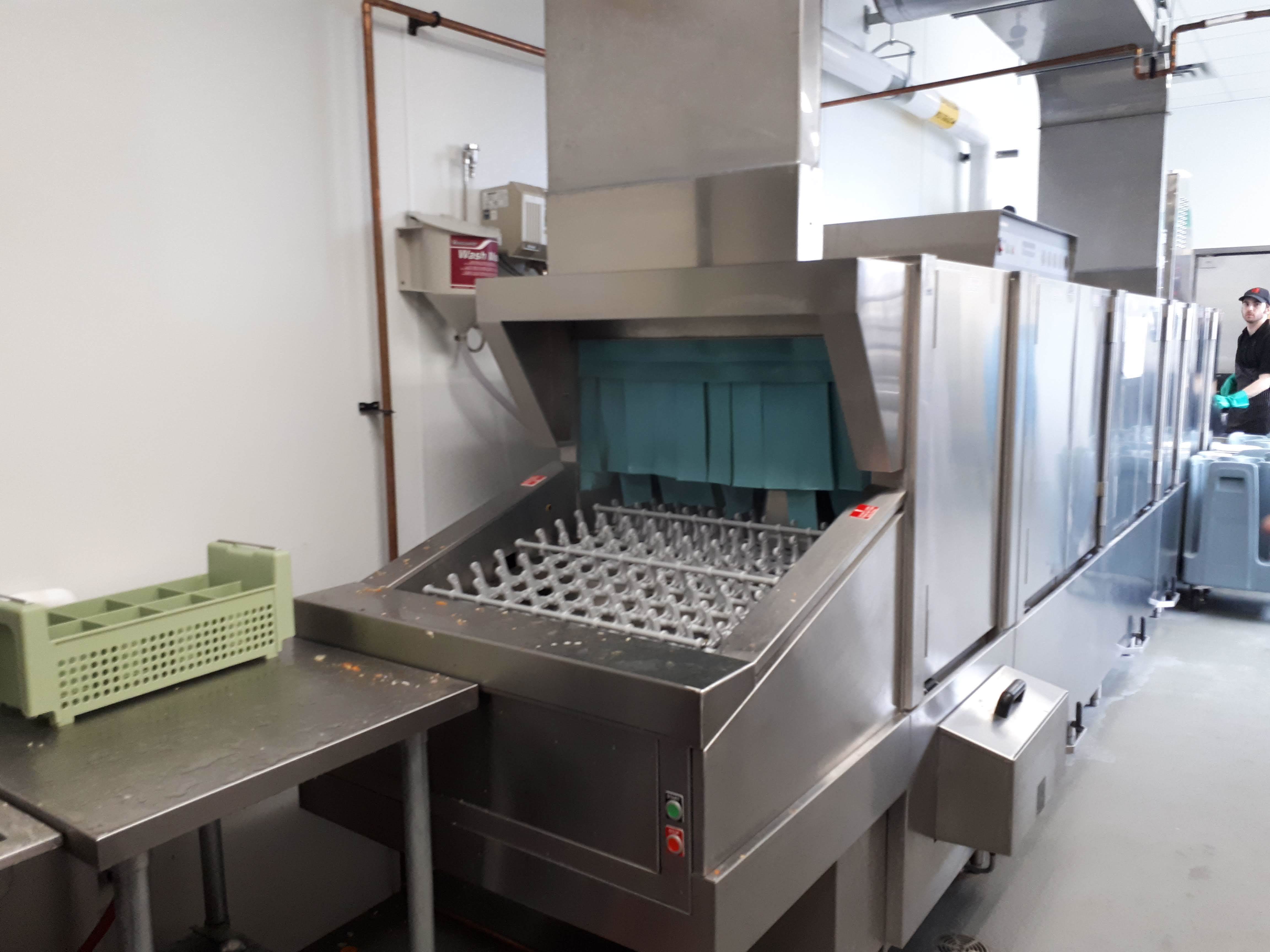 The new dishwasher installed to sustain the addition of plates and reusable containers to the University of Guelph food court.

These innovations came from a desire to do good for the planet. The University of Guelph, as a leading agricultural and veterinary school in Canada, is looking for the environment to foster its students learning for many years to come. This means that it must be preserved for future generations. Therefore, the University is stepping up to do their part in fighting climate change through responsible production and consumption. When questioned about their inspiration for the change, Bilyk stated, “it’s always been really inherit to us to do the right thing”. He explained that, because of this, they found it easy to switch the operations as they did. It felt like the right thing to do for the environment and their organization.

Though they have already put many of their innovations into practice, Bilyk expressed that they could always improve and that they are looking for ways to do more. For example, it is clear that their large refrigerators and freezers leave an immense environmental footprint. In the future, the reduction of this energy consumption is a main goal. As well, they are looking to inspire the students to choose to be environmentally friendly themselves. Compost and recycling bins are widely available around campus so garbage can be properly sorted. They have non-reusable containers available, but push students to choose reusable ones by charging extra for those that are non-reusable. Bilyk expressed that getting their students to choose sustainable options is what makes their message stronger.

Evidently, the University of Guelph Hospitality Services’ innovations have been very impactful. For example, Bilyk explained that the campus used to sell a lot of plastic water bottles to students and staff. Now that sustainable options such as water bottle filling stations and low cost reusable water bottles available for purchase have been introduced, the sales of non-reusable plastic water bottles has greatly decreased. In addition, the University shows its students that there are many rewards to being environmentally friendly. Through offering lower prices on reusable containers and cups and many other initiatives, the more than 3500 students being fed are likely inspired to maintain this push for sustainability throughout their lives. In addition, the University of Guelph serves as a role model for other Universities across Canada and the world. It shows that responsible production and consumption is possible even for large groups of people. It will hopefully push other institutions and companies to take these grand steps needed to combat climate change.

The difference between how the University of Guelph Hospitality Services operates compared to similar establishments sparks the interest of staff and students alike. This, subsequently, causes the public to become educated on why these sustainability initiatives are necessary. Because being environmentally friendly is rewarded, the numbers of people doing so have greatly increased. For example, if someone brings in a mug or cup to buy a drink at the food court, they are only changed for the price of a small drink despite the size of the reusable container. Since this innovation has been put into place, many more people have begun bringing their own mugs or cups. Already, this is reducing the waste of hundreds of plastic cups that would be used everyday. Through incentivising environmental awareness with rewards, the University of Guelph is able to have an impact on the amount of waste it produces.

For the University, these initiatives are beneficial because they draw more students who care about the environment to attend the institution. As well, it is given recognition by outside parties for its effort which provides positive publicity and, subsequently, more applicants to the University as a whole. As well, students are more likely to eat in the food court when they know where the food is coming from and when they feel as if they are doing good by supporting these initiatives. The more students the University has eating at food courts and paying for food, the more profit it makes.

For the environment and society, the University of Guelph provides countless benefits from supporting local farmers and the local economy to reducing the waste of more than 3500 students. With constant work and innovation, they have a substantially smaller environmental footprint. For example, they use an electric car to transport food from the main kitchen to other food courts. Already, this is causing less emissions through transportation and, therefore, benefiting the environment.

Overall, the University of Guelph Hospitality Services uses its innovations, providing reusable containers, plates, cutlery, and cups, growing produce in organic gardens, and purchasing meat and other product from local suppliers, to address two of the UN Goals for Sustainable Development; goal twelve, responsible consumption and production, and goal thirteen, climate action. Its operations inspire its students to live more sustainable lives and it serves as a role model to other institutions. These innovations greatly benefit the University, the environment, and society and are part of the reason why the University is labeled as the top food service operation in Canada. 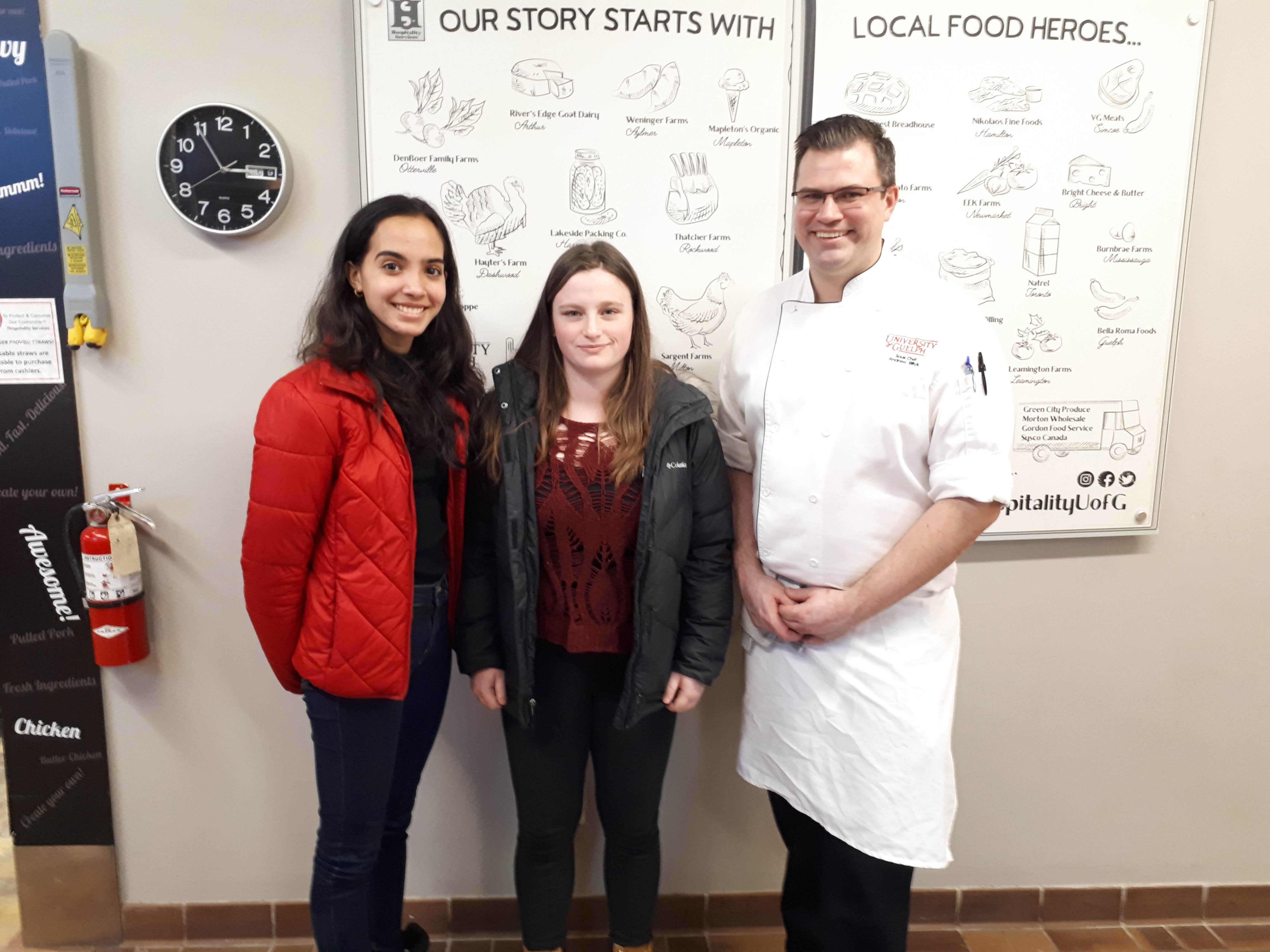 The University of Guelph is a post- secondary institution that is based in Guelph, Ontario. They are committed to improving life through different means including their many sustainability initiatives in food production and service.