YEW! found that leading surf wax brands were using paraffin to make their products sticky; paraffin is made from separating crude oil into its individual components. Paraffin, a petrochemical additive, pollutes the ocean, affecting beaches, ecosystems, and reefs (14: Life Below Water). YEW! hand-makes their surf wax in California with environmentally friendly materials, primarily beeswax which declutters beehives, revitalizing overall bee life (15: Life on Land). YEW! is a new company but as part of its mission, they plan to work with farmers and local governments to end reckless pesticide behavior in production tactics. In addition by helping to stop the production of paraffin, they can shift production practices from harmful to more sustainable (12: Responsible Consumption and Production). *Information found on yewstoked.com

Hogan Peters, founder of YEW! Surf Wax, came to realize that surf wax brands were using paraffin, a substance composed of hydrocarbon molecules derived from shale oil, in their products in order to make them sticky. In the creation of paraffin oil, it is bleached with 100% strength bleach which inevitably produces dioxins. The substance is then solidified with Acrolyn, a known carcinogen. Peters found that beeswax could provide this same desired sticky product while avoiding using harmful aspects of paraffin oil. Peters, an avid surfer himself, had increasingly been hearing the phrase “Yew!” while surfing off the California coast. He didn’t know how he could use this phrase yet but he knew he wanted to so he began the process to trademark the name. As someone who cares about the environment and ways to reduce the negative impact on it, Peters wanted whatever came from “Yew!” to be rooted in environmentally friendly practices. From here, he learned more about the major players in the surf wax market and how he could provide an alternative product that was sustainably sourced.

By using beeswax instead of the traditional use of paraffin, the ocean is not being exposed to nearly as many toxic chemicals that the paraffin oil releases. Paraffin can either be released by the individual wax products or from the production of the paraffin oil itself. Since the wax is a petrochemical, hydrocarbon energy is used to refine the wax from crude oil. In addition, by using beeswax, the overall quality of life and prolonged life for bees is being increased. When bees produce honey they overcrowd their hives with wax which is detrimental to the hive as a whole. Bees need space in their hives in order to reproduce as well as store honey and pollen among other things. Typically, when space is running out, bees swarm which splits the colony in half. This can be a healthy way for bees to increase the functionality of their colony but human interaction can also aid the bees in a similar way. By providing structures that can be easily expanded as well as removing excess materials from their hives such as honey, the bees can continue to flourish as one colony. This human interaction is primarily useful in the honey and wax production industries. Since the bees are being overworked, human involvement through decluttering the beehive is an important element to the flourishment of the colonies. And when the time comes for a swarm, the beekeeper can be ready to assist the bees during the process. *Information found on perfectbee.com, kimointernational.org

YEW! also aims to help the bees by helping to bring back the plants that bees rely on. They are doing this by creating tags on their clothing that can be used to plant wildflowers which will replenish the soil and rejuvenate bee populations. 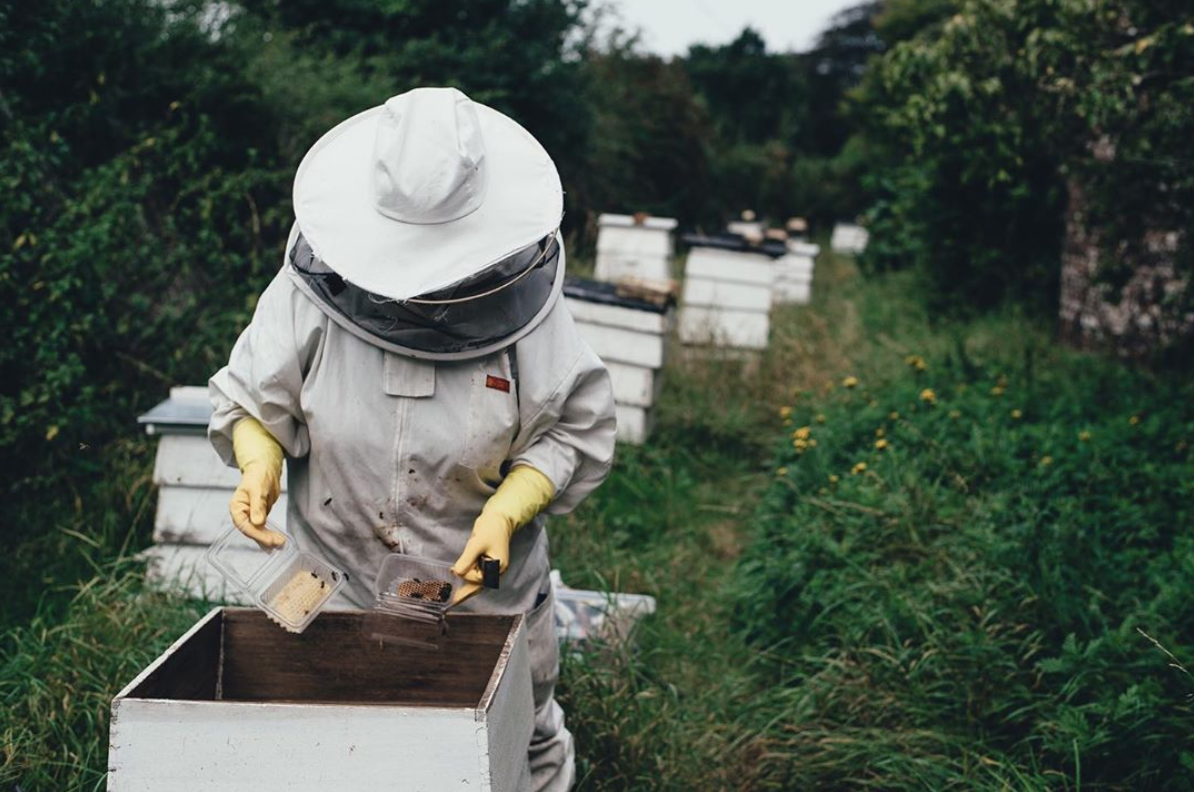 YEW! surf wax is made with responsibly sourced beeswax

Peters was in an environment class when he came to the realization that he should enact change by doing it on the social level by making it fun for people. He knew he wanted to use “Yew!” since he kept hearing it in the water when surfing but still wasn’t sure how to apply it.

“Later down the line, my science teacher asked ‘write this paper about an environmental issue and how you’d want to fix it.’ I was writing so many papers at the time that I went up to him and asked, ‘why write a paper when you can just do it?’ Eventually, I wrote this paper about how these major wax companies were doing negatively affecting the environment and I wanted to use “Yew!” to create a wax that tackled some of these problems.”

The motivation for using beeswax as the alternative solution was two-fold. It kept paraffin out of the oceans while increasing the quality of life for bees. A major motivation for enacting environmental change in the surfing industry is because that is where his passions are. That’s not to say YEW! is solely a surf company as they are working on countless other ways to adapt his sustainable formula to solve other industry needs.

The innovation to use beeswax in surf wax launched the creation of YEW!. Peters first realized the problem existent in the surf wax industry and from there, launched his company with the purpose of tackling this issue. Peters’ primary goal was to inform surfers of the harm traditional surf wax caused the ocean.

“With no ill intentions, surfers across the globe are directly harming the ocean because of the wax they use. Available formulas rely on paraffin, which is refined from petroleum and made of hydrocarbon molecules that release carbon into the ocean, contributing to the crisis of ocean acidification. This process emits dioxins, toxic chemicals that cause reproductive and developmental problems, damage the immune system, and can cause cancer. The surf wax industry has been stagnant for decades. We think it’s time for a change.” – Hogan Peters

With his improved surf wax, Peters hopes to create movements of change in local communities. His hope in making an impact on both society and the environment stems from the idea that small changes lead to big changes. In addition to using sustainably sourced beeswax and providing wildflower seed tags, YEW! uses 100% recycled paper in their packaging. These packaging practices save an immense amount of resources.

YEW!’s mission has undoubtedly captivated a small audience of individuals given that they exceeded their Kickstarter funding goal by $3,000. This bodes well for them in the future because it shows that they have backers within the community and can certainly leverage this when securing additional funding. The sustainable practices employed at Yew! have contributed to the satisfaction of the employees, in that they feel as though they are making a positive impact on the environment and the community. YEW! has successfully on-boarded a group of Stanford interns that are committed to the company's mission statement. YEW! is able to attract talent from top institutions as a result of their commitment to the environment. Given the environmentally conscious nature of the surfing community, YEW!'s sustainable practices will undoubtedly garner them recognition in the community and they have the opportunity to seize a significant portion of the market share. Furthermore, YEW! is working on forming partnerships with other charitable organizations that align with their cause. For example, Peters said he is working on a liaison with the Rob Machado Foundation, which is committed to eliminating the use of plastic water bottles and cleaning up beaches. By partnering with established players in the surfing community, YEW! will not only increase their reach and expand their market but also further their goal of environmentalism.

Yew! is not only reinventing the space in the surfing community, but it also plans on branching out to other industries such as baseball pine tar, skate wax, and hockey wax. YEW! Wants to bring their unique style and innovation to all wax products in an effort to carry out their environmental dogma. For Peters, it is essential to maintain the balance of generating profits and scaling, while also providing a net gain to the environment.

In terms of scalability, there are a few significant challenges that YEW! will be forced to overcome in order to carry out its mission. For starters, as of now, their production is fully manual and limited to a small scale operation. In order to realize their goal of competing with leading surf wax brands, they must optimize production so that it is more efficient, cost-effective, and has the ability to be produced in large quantities. To achieve this, YEW! will need to raise significant capital in order to fund factory production, warehouse storage, and shipping infrastructure. Another barrier to YEW!’s industry dominance is product consistency and testing. Although the current wax formula has gotten positive feedback and reviews, they are still in the process of beta testing in order to fine-tune their formula. YEW! must work with an established lab to not only fully perfect their formula, but also provide consistency to their products. This phase will be intertwined with factory production. Lastly, YEW! will require further scientific testing in order to create new formulas for other types of industries such as skate wax, pine tar replacements, and any other wax-based industries they chose to set their sights on. *Information found on perfectbee.com, kimointernational.org 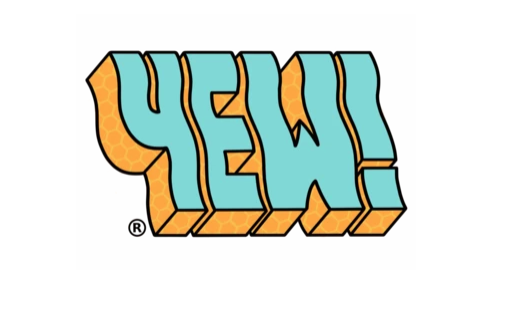 YEW!: Your Environment's Wax uses clean, pure, and simple ingredients to provide a non-toxic alternative to traditional surf wax. YEW! offers surfers uncompromising hold and performance while incorporating sustainable initiatives in every element of their business. *Information found on yewstoked.com