Evergreen Cooperatives started in 2008 as a holding company that would form a larger umbrella company for cooperative worker-owned collectives that combined sustainable business practices and worker ownership.

The company began as a working group of Cleveland-based institutions including the Cleveland Clinic, Case Western Reserve University, University Hospitals, Cleveland Foundation, and the City of Cleveland to create living-wage jobs in low-income neighborhoods known as the Greater University Circle.

The initiative was focused on radical economic inclusion by allowing employees to own the business and then creating new business ventures under the umbrella. The cooperative focuses on sustainability in the industries represented and currently has branches for urban farming (hydroponic), laundry services (green and less toxic laundry), and energy (solar installation/LED) sub-companies.

Unlike many small collectives, Evergreen operates on a much larger scale, which allows them a greater degree of flexibility to experiment and implement until they achieve repeatable, and financially positive, business processes.

Since CEO John McMicken has taken over, Evergreen has been more successful in encapsulating the business processes, best practices, and know-how for successful larger-scale worker-owned co-operatives. McMicken elaborated, “We (now) have a professional services division that has been called upon in different stages of launching worker-owned co-operatives. We can bring financial benefit to this organization by sharing our experience and expertise to others who can do something similar.” 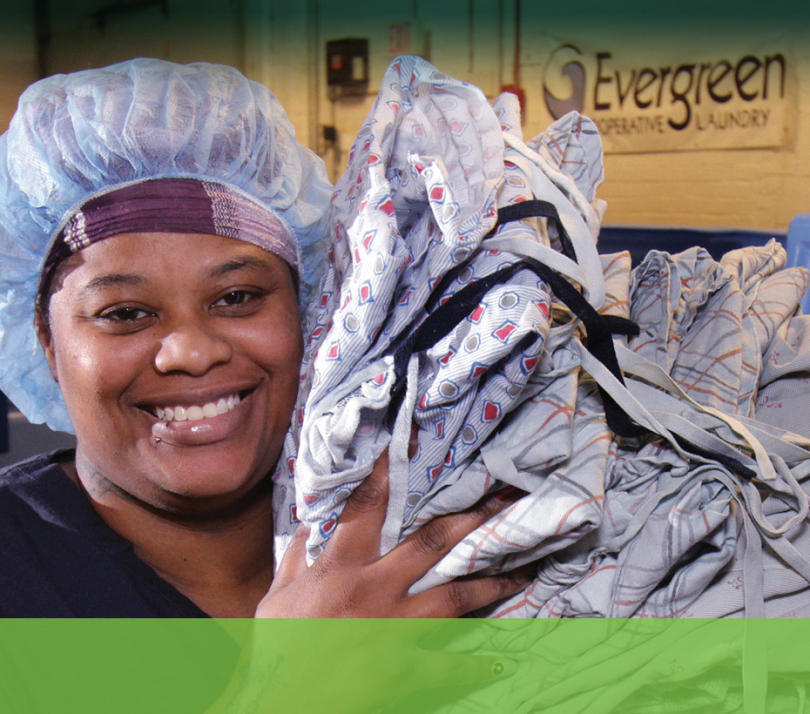 The Greater University Circle area suffers from desperate poverty in many surrounding neighborhoods despite having large anchor organizations in the area. Many “empowerment” zone initiatives had been started, creating goodwill, but ultimately failing to create any wealth inclusion or sustained organization. As Tracy Nichols, director of the Department of Economic Development for the City of Cleveland states, “In economic development you create jobs by offering companies to relocate, and a company is here for 10 years and then moves away, and you have to ask yourself, are these people better off? They had a low-paying job for 10 years and they paid their bills, but they didn’t build any equity.”

Historic models of economic development seemed short lived or unproductive, so the think tank representing the University Circle revitalization initiative (formally known as the Greater University Circle Initiative) began to talk about the Spanish company Mondragon, which was a worker-owned cooperative worth $20 billion in annual income. Some of the focus immediately turned toward how this company had brought the Basque region out of extreme poverty after the Spanish Civil War. Could the model of a worker-owned cooperative do the same for the Greater University Circle?

McMicken certainly believed it could. One of his peak experiences was in knowing and understanding the scope of the Evergreen project. McMicken said, “The challenge of proving that (this) could be successful, made me make a career path change. This (is a) nice balance between more traditional bottom-line-oriented math in order to have the impact on the social impact for personal wealth building.” He goes on, “I am inspired the most by the people. When it is working, Evergreen is the perfect convergence of financial-orientated benefits … that change lives. There are dozens of people in our organization that are in a much better place because Evergreen provides an environment for them to make the changes, and then they had to do the work.”

Evergreen has approximately 120 employees and has become fully profitable while growing. All three of the business's sub-branches have achieved profitability: Laundry (ECL) and Energy (E2S) have been profitable since 2014; while the Greenhouse (GCG) is projected to reach break-even by the end of 2016. Evergreen is in a position to scale upward with much greater ease and in new areas as demand increases and as it works on generating higher demand. Evergreen has second-chance programs to actively hire former felons and tries to hire refugees, serving two even more economically distressed communities, which “impacts the community with an even greater reach.”

While the growth has not been quite as fast as the traditional economic development method of inviting a company to come into an area, the growth has been more stable, organic, and sustainable. Authentic wealth has trickled directly back into the local community. McMicken said, "Where we get criticized is the number of jobs created versus the investment. Well, you spent $10 million to $12 million dollars and created 120 jobs, but are you really impacting the community? The impact goes beyond the job and wealth initiative. We have other programs like our home-buying program. We have helped 23 people buy their homes. This has a direct impact on the community and having our employees own their homes is a great advantage to us. As far as the investment to create the jobs, we look at that as a lesson learned, and there will be a whole lot less R&D involved, which we pioneered. We will see a higher level of return from here.”

In addition, all three businesses under the Evergreen umbrella are sustainable businesses in themselves. Each business is becoming proof that sustainable businesses can have real financial rewards, and that business can operate (successfully) in a different manner. Evergreen Laundry is the region's first LEED Gold commercial laundry facility in this region. The business uses better-than-industry-standard practices, has a lower cost, reduces toxic chemicals, and is far more sustainable. Evergreen energy solutions have installed solar arrays on huge Cleveland anchors, such as the Cleveland Clinic, University Hospitals, Case Western Reserve University, and more, while saving institutions thousands of dollars on electric bills. Green City Growers has become the largest food-production greenhouse in a core urban area throughout the Unites States with the ability to serve institutions within 150 miles of Cleveland.

Evergreen’s model has several real competitive advantages over traditionally structured companies. According to McMicken, “From a sales and marketing perspective, we have a real differentiation when it comes time to pitch the organization and products and services we offer, because behind that is, if there is any value placed on a worker-friendly environment, it does not get any more friendly than a worker-owned cooperative … the ability for a sales and marketing team to even get a meeting with a decision maker, or the ability to displace a more traditional competitor is a unique advantage an organization like ours has.”

According to Gallop, actively disengaged employees cost U.S. companies $450 billion to $550 billion in lost productivity each year. Evergreen reverses this trend. McMicken added, “When the worker-owned cooperative begins to click, we see simply higher levels of quality and performance among the staff who now understand that things like quality, performance, and customer service affect the bottom line. We saw when we first did some profit sharing, that some light bulbs go off and staff members care more about their performance and the performance of their co-workers.”

Being a worker-owned cooperative, Evergreen trains and helps each worker to come to the table with innovation and ensures the opportunity for them to be heard, which allows the company to capture an employee resource advantage. Off the top of his head, John gave examples of how employees have saved the company hundreds of thousands of dollars with their suggestions, such as new delivery routes that save gas, and how adding a door in one location increased the productivity of all of the greenhouse employees.

Evergreen Cooperatives is a radically democratized worker-owned collective, proving not only that such an inclusive wealth-building project can work in the United States but that it can work while fully embracing sustainability at every level. All three current businesses in the cooperative are sustainable and financially profitable (as noted above, Greenhouse (GCG ) is projected to reach break-even by the end of 2016). The energy division has reduced the power consumption of major Cleveland clients while moving more of their energy use to sustainable solar energy. The Greenhouse Project grows and supplies food to many consumer-based businesses in Cleveland, which increases the food quality, reduces the toxic chemicals used, and reduces energy and water costs of food and its transportation. The Evergreen Laundry service detoxifies the traditionally toxic laundry industry at a lower cost than traditional laundry services and the building itself is a model for sustainable and waste reduction.

Of course, there are societal and environmental benefits from each of the business's sub-branches that Evergreen supports. The real societal and environmental benefits may come from the shifting vision that Evergreen is proving every day. McMicken said it best: “We always continue to integrate the most sustainable practices in our businesses... (focusing) on the people aspect with our unique hiring initiatives, and always continue to reach for maximum profitability to accomplish those wealth-building goals at a faster pace.” 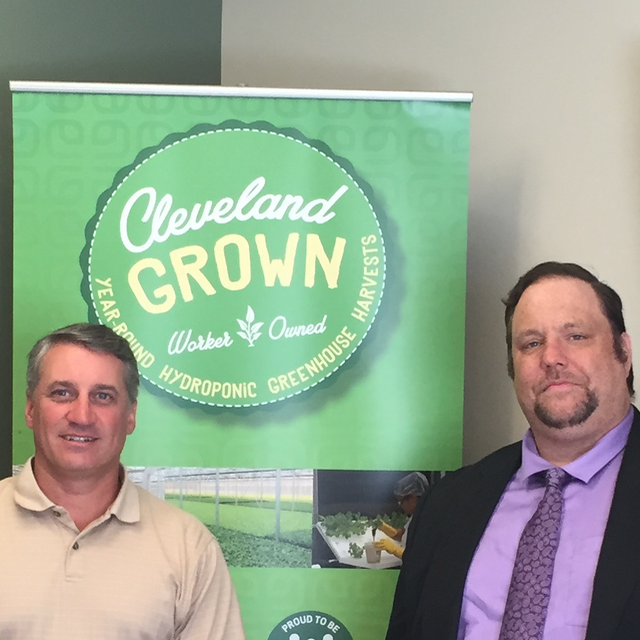 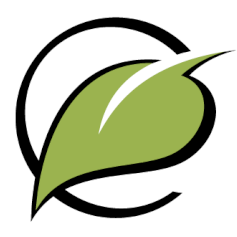 Evergreen Cooperatives is a worker-owned, wealth-sharing company that integrates the most sustainable technology, business practices, and goals throughout every branch of the company. Evergreen provides a much-needed breath of fresh air for the sections of the Greater University Circle in Cleveland that are desperately economically downtrodden. Evergreen transforms the notion of the worker-owned co-operative into a sustainable, profitable, repeatable, and scalable business model that has transformed hundreds of employees' lives. Centered in Cleveland, Ohio, the Evergreen Cooperative has become a much-watched model for urban development in economically hard-hit areas focusing on organic hydroponic urban farming, energy (solar and energy reduction), and green laundry services.