Water, Consumption, and Production, Oh My!

The Ranch combines beautiful scenery, luxurious rooms, and numerous options to relax or have fun all while minimizing their impact on the environment. Acknowledging the natural beauty of the resort, The Ranch has devoted itself to not only maintaining the natural landscape of the resort grounds through various sustainability practices, but also helping others with their own sustainability practices. The Ranch is a member of “Beyond Green”, a group of hotels, resorts, and lodges that are held to the highest standard of sustainable development goals. Through their very diverse set of programs which include but are not limited to: recycling glass into sand, a water reclamation project, harvesting their own food, composting, reducing the amount of plastic used on resort grounds, and volunteering to maintain part of the Aliso Creek Channel, The Ranch is committed to being at the forefront of sustainability. These practices align with the Sustainable Development Goals: Responsible Consumption and Production, and Clean Water and Sanitation.

The Ranch’s origins do not begin as a resort, but rather, a homestead. Built in 1871 as a watermelon farm, locals began referring to it as “the ranch”. In 1962, they opened the primitive inn on the land that would eventually be sold around throughout the 1990s until its ultimate revamp, reopening as “The Ranch” in 2013. The Ranch has a rich history; they honor the legacy of their land by advocating for sustainability through launching three initiatives: Bottles to Bunkers, Harvest Garden, and their Water Reclamation System. They began promoting sustainability very early since their founding as a resort. They have been striving to become an example of how organizations can live and work with the land through sustainability. According to their website, they changed how their property uses water, reduced the need for produce deliveries, and adopted more sustainable practices, because they are “committed to being at the forefront of sustainability and charitable efforts” in their region. These practices align with the Sustainable Development Goals: Responsible Consumption and Production, and Clean Water and Sanitation.

Bottles to Bunkers is one of The Ranch’s innovations that demonstrate their goal for Responsible Consumption and Production. They were one of the first entities in North America to establish a program that recycles glass into sand. As a resort, they have tons of alcohol glass bottles that get used. Instead of causing emissions by shipping them elsewhere for recycling, they crush them into sand, which is then used for bunkers on their golf course, in their pool filtration system, and sandbags for flood control. The program works to reduce their waste and create usable sand for the resort. The Ranch’s Manager of Sustainability and Purchasing, Tyler Kamphefner, explains the process to us; “We use the GL sand crushing machine, which breaks down bottles one by one into smaller and smaller pieces. From that, it is transferred over into the sand sifter where it sifts the sand into pieces based on size.” This also eliminates the need to ship sand to the resort and prevents the harmful environmental side effects of dredging and mining.

Harvest Garden is another one of The Ranch’s innovations that demonstrate their goal for Responsible Consumption and Production. It is a half-acre, on property garden that creates produce, flowers, and raises chickens. The Harvest Garden is both used as a way to cut the emissions of transportation and to supply food for their onsite restaurant. According to Kamphefner, “Harvest Garden provides all the produce used in our salads, eggs, and more.” In addition to the garden, they also utilize composting through all their leftover food from their resort restaurants and paper scraps from their office. Kamphefner calls this, “closing the system and the loop,” because it allows the compost to be reused in their garden.

The Water Reclamation System is one of The Ranch’s innovations that demonstrate their goal for Clean Water and Sanitation. The Ranch is located in Southern California, a region known for dealing with drought issues. Resorts require a lot of water to operate, rendering them responsible for their water consumption. Kamphefner claims that implementing their water reclamation system has saved them “around 20 million gallons of water every year”, not only helping The Ranch, but also helping the City of Laguna Beach. As a resort, The Ranch’s sole purpose is their commitment to their community by making sustainable choices fundamental to their resort’s operations.

It is clear that The Ranch cares about the well-being of their community in the way they invest into sustainable practices. By analyzing and researching how they can effectively change the way their resort operates, they are able to integrate Responsible Consumption and Production, and Clean Water and Sanitation, into their everyday operations. 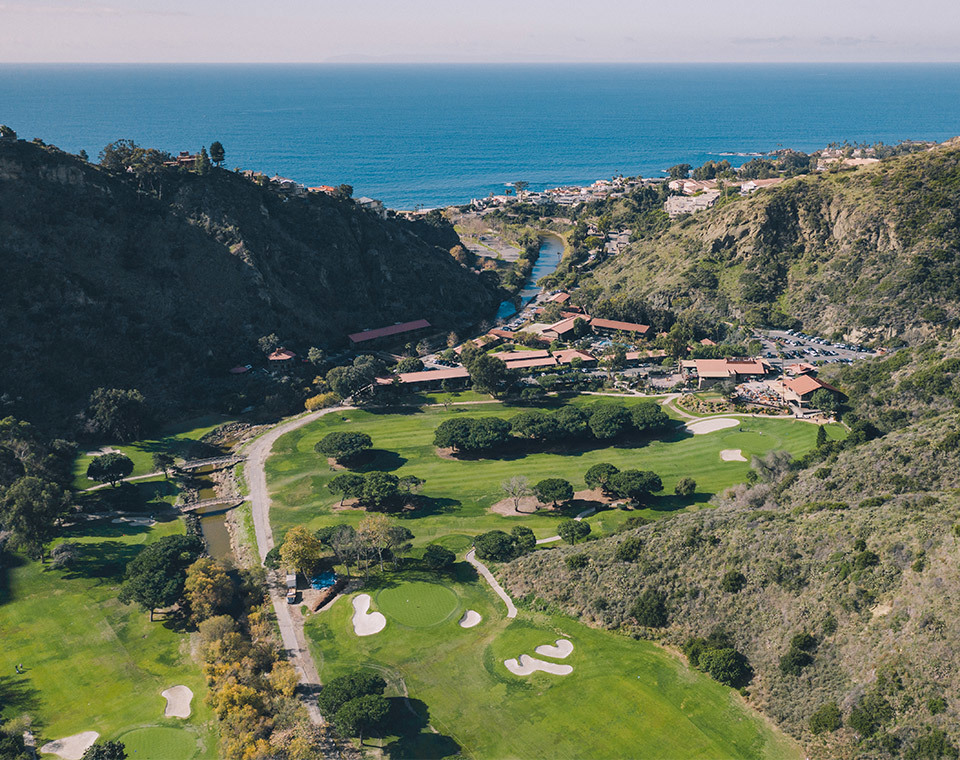 The inspiration for The Ranch’s innovations arose from the resort’s owner, Mark Christy, who is passionate about sustainability. Mark desired to make a strong impact with sustainability initiatives by going above and beyond what is typical in the hospitality industry. A resort remodel in 2016 provided the perfect opportunity for The Ranch to implement more sustainable practices. Kamphefner explains that the resort’s leadership “looked into every single aspect of the property to see where sustainable practices could be implemented.”

The motivation behind these initiatives stems from the aspiration to protect the Ranch’s surrounding environment, which is nestled between the Pacific Ocean and the mountains of Laguna Beach. Its initiatives ensure that the resort's impacts on its land and the nearby Pacific Ocean are minimal to preserve the scenic landscape for generations to come.

One of the most important aspects of creating a sustainable future for a brand is the lasting impact that is impressed upon the community in which it is based. For the Ranch, the after effect that occurs is not only to create and develop a sustainable luxury resort, but also to set an example for other institutions to follow in the future. The implementation and development of sustainable resorts is beneficial financially and environmentally. In choosing to create and develop a brand that is aligned with the values of the community, there is extreme potential for growth and development across the board.

For The Ranch, this is largely rooted in the ways that they have developed a relationship with local communities of farmers and fishermen in the area. This is by far the best way of bringing forth a reliable, high quality product to consumers while still contributing to the local economy. The “Beyond Green” initiative is by far one of the best ways that resorts like this are able to truly make a difference in the areas in which they inhabit. According to Kamphefner, the differentiating practice of pushing for sustainable resorts has attracted a lot of large customers like Netflix and Rivian, who often participate in large events and partnerships that have in turn brought more PR for the Ranch. Also, the Ranch has been able to decrease their costs through the implementation of low energy bulbs and fixtures, as well as an onsite water reclamation program.

On a local level, the Ranch has been able to give back to the Laguna Beach community through a wide variety of initiatives. For instance, the Ranch’s water reclamation program allows the city of Laguna Beach to save more than 20 million gallons of water annually. Kamphefner also spoke about how the Ranch works with a local farm, The Ecology Center, which allows guests to pay an additional fee with their stay to plant trees on the property or in the surrounding area.

On a larger scale, the resort has also made waves to create a cleaner environment for all. Kamphefner states, “Being on the beach, ocean plastic has always been on our minds, and we have always wanted to do something about it. Not too long ago, we installed microfiber filters on all of our wash machines at the resort. Every time you do laundry, that releases hundreds of thousands of microplastics, and these filters collect those plastics before the water then enters into the ocean. This ultimately is protecting the ocean from more damage through microplastics”. The installation of microfiber filters has been revolutionary in decreasing the amount of microplastics that are released into our environment, which are of constant harm to oceanic wildlife. It is extremely important that other resorts, or even other cities across the globe, are beginning to acknowledge and create change on a variety of different levels.

The Ranch aims to extend the impact of its sustainability practices to not just the immediate area around the resort but to also have a positive impact on a much greater scale. This can be seen through its partnerships with organizations like “Clean the World” which collects and recycles soap and hygiene and donate them to impoverished people around the world and “Huppy toothpaste” which is an oral care company that provides all-natural, plastic-free toothpaste designed to better the planet. The product includes zero-waste packaging, non-toxic ingredients sourced from nature. Through these partnerships, The Ranch maintains its status as not only a member but a leader in Beyond Green which has set the standard for sustainability practices by a passion for travel as a force for good.

Through The Ranch’s innovations, the resort is making both a positive societal and environmental impact. The Ranch’s water reclamation system is saving the City of Laguna Beach around 20 million gallons of water annually, helping fight against the current drought conditions grappling California. This water-saving measure by The Ranch is setting an example for how other households and organizations around Southern California can save water in the region’s dry climate. Furthermore, the Bottles to Bunkers program’s onsite glass recycling reduces local emissions by eliminating the need to transport those materials to be recycled elsewhere. Reducing local emissions can allow residents to breathe easier by eliminating unnecessary polluting chemicals and smog.

The Ranch at Laguna Beach is a private resort and luxury hotel that was voted Top 10 Resort Hotels in California, in Travel + Leisure's 2020 World's Best Awards. It is located in between the canyon and the sea, providing a peaceful and relaxing environment for their guests. With hiking trails, beachfront cafés, a golf course, spas, and more, the resort offers guests an elevated travel experience, all while being green.