Bio Ambientar has designed the methodology to reduce the time of decomposition of organic solid waste, generate organic fertilizer and from there promote a culture of urban agriculture.

This technique is available to the community who teaches the work of sowing urban gardens, management of organic and inorganic waste and the transformation of solid waste.

This project was launched through a meticulous investigation of experiences in countries such as the United States and Brazil, that bet on sustainability from the transformation of organic waste, that is, waste generated from plant waste that day by day is generated at the time of cooking, such as potatoes, peas, carrots, oranges, among others. This resulted in the final result that Diana Martinez and her team managed to reduce the decomposition time of organic solid waste from 6 months to 10 days, as it is named in the following section:

"... we went from three months decomposition and then we started to go down to two months, a month, and we saw that we could; put all the innovation part from the expertise of the agronomist and microbiology engineer joining knowledge and start generating that acceleration reaching 10 days of decomposition ".

The consequence of this resembles a brown color with similar characteristics to those of the earth. Similarly, it was observed that the coconut fibers could be used as pots to deposit, first, the compost made of earth and second, the natural seeds to generate their plant and fruit.

Therefore, this company has the purpose of caring for the planet, by identifying that Colombia is one of the most diverse countries in plant foods, where many times there is no appropriate knowledge of the proper use of these and the benefit for both people and the world.

As a result, urban agriculture is promoted through composting and biotechnology, a trend that is applied in planting and harvesting from home, so that all people can have healthy, organic and fresh food, two steps away from their kitchen. They also teach the separation of waste, composting and having an organic garden at home. 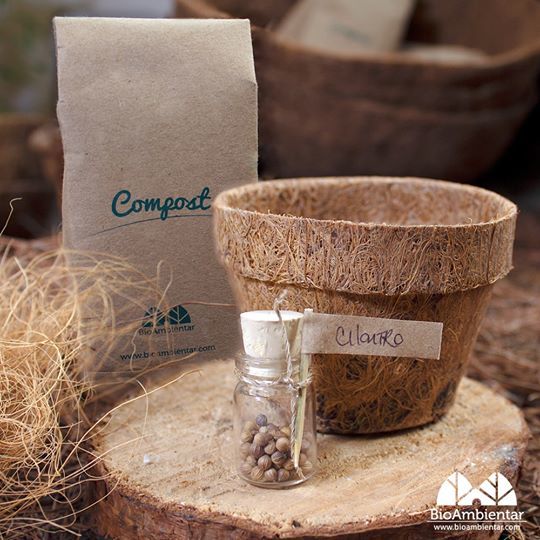 Diana Martínez started with this idea because of her training as a researcher and her inspiration that arose from experience in places like Hawaii and Brazil where recycling systems have been implemented. She could see that clearly in Colombia it was not implemented. So, with the support family who are partners and co-founders of the company, they begin to develop the proposal of accelerated decomposition of organic waste.

"... this starts when ... I trained as a researcher, then I started to have experience in Brazil, in Hawaii, and I realized that the recycling systems. But every time I came to Colombia on vacation, I realized that we were very lazy about this type of technology or it was not being implemented, so at that moment, what I proposed to my family was: I want to mount this, I think the process of decomposition of waste can be accelerated, but of course we had to start investigating, and that's how my parents, who are now partners and co-founders, just like me they started to support me with this initiative ... " .

According to the United Nations, 1.8 billion people use contaminated water, where only 2% is suitable for human consumption. In Colombia 11.6 million tons of waste are produced per year, of which 60% is organic; in Bogotá, more than 7,000 tons of waste, of which 4,200 is organic and is being discarded in landfills: a high figure since landfills are running out of space and with a useful life of a couple of years.

The production of residues that can be transformed into compost and in turn contribute to the city in terms of improving air, water and soil pollution; the improvement of fertilization processes from an organic product; the planting of organic foods that impact sustainable lifestyles; the development of a recycling culture, and the low level of leachate produced by garbage that contaminates land and underground water sources.

Bio Ambientar, currently has three lines of business in the field of agricultural elements and one in consulting. The first, Organic Seed Kit that is delivered at fairs and events. These elements are sold with the main objective that people can share with their family, friends or partner as a different and sustainable gift; it is also for companies that want to have a meaningful gift for their employees. The second, domestic compost, tested and approved with 10 users, so that people have pots to produce their food, as well as the planting of vegetables at home that are used for aromatics and meals. Third, industrial systems including restaurants; the purpose of this line of business is to generate a massive planting system, using composting as a fertilizer for the plants, this serves for large food productions.

And, finally, by keeping in mind that people's mentality must be changed to a conscience that is more friendly to the environment both inside and outside large cities. We have generated advisory approaches, in terms of the care of the terrestrial ecosystem where they are advised on the classification of waste, planting, harvesting and preparation of inputs for the field. This is a program called: How to save Bogota in 4 hours. The great potential of this line is that both the state and private entities can implement it in their development policies, having a favorable impact that reaches the entire population.

"What we want in Bio Ambientar is to place composting in Bogotá, this is our greatest challenge as a company". That is, for all people to compost from their homes and thus maintain a culture in favor of the environment.

Initially it was carried out as an experiment for a social and ecological tourism purpose and is currently in the technopark of the Seine, where all the possible research is carried out so that, making composting is increasingly efficient, easy and useful.

All the prices of the different lines are reasonable, so that those who can benefit from it, get to share it in different places and thus promote a healthier agriculture.

Given the high use of fertilizers, Bio Ambientar aims, through the Compost, to change chemical fertilizers to organic fertilizers. Diana explains that "It is possible to obtain an organic fertilization system from our waste". Multipurpose Compost is a product certified by Agrilab Laboratories S.A.S. as a Solid Organic Fertilizer. Currently the products that are marketed have been certified by the Ministry of the Environment and are considered as "A Green Business".

It has been made known to farmers through free samples in the city of Pasto; in Bogota the commercialization of the Compost is in the process of certification by the ICA.

Accelerate the process of decomposition of organic waste through biotechnology and the teaching of urban agriculture techniques, so that you can manage your waste in an easy and personal way.

- We believe in a world where each person manages the organic waste they produce and grows a percentage of the food they consume.

- We believe in a world with agrochemical free foods.