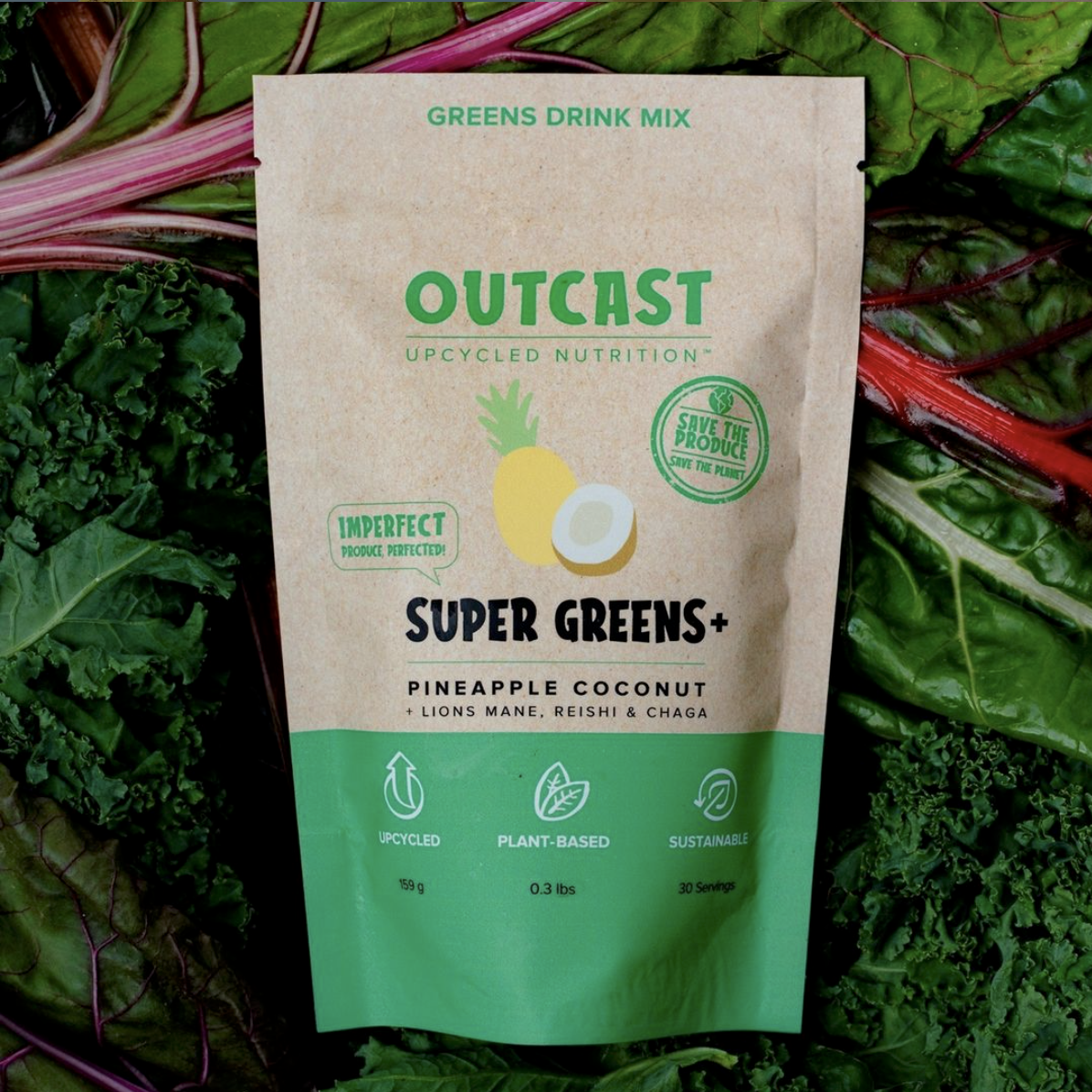 Outcast Foods is an environmentally friendly company that is providing an innovative product while completing its company goal of helping fight climate change. They achieve this by using a process called upcycling food, where they purchase produce that can't be sold in grocery stores to reduce the amount of food that goes to landfills. They are creating a big impact on lowering carbon emissions through upcycling and their zero-emissions processing facility. Which pertain to key issues that focus on aligning with 6 of the UNSDGs goals.

Outcast Foods was founded in 2017 by Dr. Darren Burke and TJ Galiardi on their revolutionary innovation that allows for the upcycling of food waste. They are now the first patent-pending zero waste upcycling technology company that is actively reducing food waste. Their process involves taking food waste from local supermarkets, farmers, and food distributors to create upcycled plant-based supplements. Their company mission is to reduce food waste or “unsuitable” foods that end up in landfills by purchasing unwanted product from suppliers and turning it into plant-based supplements. The goal is to do this while, at the same time, lowering greenhouse gas emissions and reducing their carbon footprint to help save the planet. Below is a summary of their process:

Outcast’s product is one that can help inspire up-and-coming businesses in the produce industry by providing an example of how to create a better and cleaner earth. This company's mission is first to help lower greenhouse gas emissions by providing a product that is healthy and environmentally friendly. Outcast Foods Is bringing about change through environmentally-friendly supplement products and upcycled food, helping to fight climate change.

During his first year playing in the NHL, TJ Galiardi met his future co-founder, Dr. Darren Burke. At the time, Burke already had his own successful supplement company and was selling to pretty much every team across the major five sports. Their first meeting was the start of a friendship that has spanned over a decade. Burke’s successful exit from his prior supplement company resulted in a five-year non-compete agreement. The noncompete came to an opportune end near the same time that Galiardi retired from professional hockey. The two friends decided that it was the right time to start a business together.

The plant-based diets followed by both Galiardi and Burke led them to become wrapped up in the world of environmentalism. They became united in the goal of leaving this world in better condition than the way they found it. When sending ideas and articles back and forth, the topic of food waste became a recurring theme. “You would see a full crop going to waste because the cauliflower was too big or too small,” recounted Galiardi, providing an example. “There were all these different issues, but nobody was talking about a solution. We thought we could be the two to come up with something.” Sure enough, from that mindset in 2017, Outcast Foods was born.

The idea and accompanying technology that enables Outcast to upcycle food waste is the main reason for their success as a company. The process is integral to allowing them to add value to suppliers and carve out a profitable position in their respective market. Outcast’s story is scalable and has immense potential to impact society as a whole. Garbage disposal has become a problem worldwide, but the upcycling process has the potential to change the way food waste is treated by keeping less than perfect produce out of landfills.

Outcast foods are focused on creating a sustainable and eco-friendly product through upcycling and the reduction of food waste, thus helping create an impact on long-term climate change. Focusing on these goals by making it their mission to impact society, Outcast Foods is currently working on opening another facility in Ontario that will be able to process 1.5 million pounds of produce a month. Opening this new facility will help keep 1.5 million pounds of “unsuitable” food from going to landfills, lowering greenhouse gas emissions. Focusing on producing their plant-based supplement with upcycled food and zero-emission facilities, Outcast Foods has the potential to make a long-term impact on the environment.

Outcast’s innovation is not only helping the environment but also adding value to the supply chain in its industry. To make an example of Outcast’s partnership with its supplier Sobeys, Outcast is able to add value by purchasing products that would otherwise be unsellable. Sobey’s is not only saving on disposal and hauling fees that would normally accompany dealing with food waste, but it also turns a profit. “It is not something where they’re looking at us as a charity,” said Galiardi when discussing the situation.

On an environmental level, Outcast is helping to solve the food waste problem by saving “unsuitable” produce from ending up in landfills. One of the most important aspects of the company's plan is that the production process itself does not consume a lot of energy. Ensuring low emissions and saving energy has a significant impact on the environment by reducing greenhouse gasses.

Socially, Outcast saves “unsuitable” produce from ending up in landfills. By disrupting the food waste pipeline and creating the opportunity for a new, upcycled, plant-based supply chain, Outcast helps to bring an end to mass food waste. Outcast scoops up the “unsuitable” products that would otherwise end up in landfills, releasing methane gas, and takes them to a zero-waste facility where they are turned into dry, whole-grain food powders. The Ontario facility discussed earlier will be processing up to 1.5 million pounds per month. That is a substantial number to plug into to reduce greenhouse gasses and reduce waste.