By opening a Barrio in the heart of Kent, Ohio it allows for Kent State students to get food, find a well paying job no matter your race, gender, ethnicity, etc., and even create revenue to the City of Kent. The long awaited college town restaurant in Kent opens up the city for growth and new business not typically seen. It also allows students a place to relax and enjoy good, sustainable food.

Barrio Tacos is a company brought to life behind the minds of Sean Fairbairn and Tom Leneghan. In mid-2019, Barrio decided to open its first restaurant in a college town, and this town happened to be Kent, Ohio. The location decided for this restaurant specifically is right in the heart of downtown Kent, only a ten-minute walk and five-minute drive from Kent State University.

The innovation of opening up their first college town restaurant is something all managers and owners saw as an amazing opportunity. Nico Chesnick, the executive chef of Barrio, stated, “Opening our first college town restaurant was something we had all been looking forward to for a long time. It is something that we are very happy with and proud of for many reasons.” These reasons they had in mind included the fact of great minded workers, a thriving spot for business, and also the ability to help the community. Downtown Kent is mainly known for its weekend partying and smaller restaurants. Having a restaurant and bar in this area not only gives a great work opportunity for employees, but also a place to have some drinks with friends, grab great food, and help the community profit. Giving the opportunity to over 100 college students and locals to work for higher than minimum wage is something every worker is grateful for. 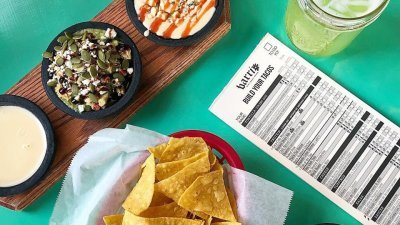 Barrio had been looking into opening a restaurant in a college-style town for some time. They have limitations on this because of a non-compete agreement with another chain down in Columbus, Ohio. When it came to Kent though, the ability for amazing things to happen was unmatched. With the opening of Kent Barrio, the idea for sustainability came fully to life. One thing that continues to be a monthly innovation is the tacos and delivery system. Cisco is the delivery partner for Barrio, how Kent receives all of its food. Cisco is listed as the number 14 most sustainable company in the world in 2019 according to Forbes. This shows that Kent Barrio does, in fact, care about a great quality product that is consistent. With Cisco being a sustainable company delivering the food, it allows Barrio to follow in its footsteps by recycling all boxes and components available to them once they are done being used.

Another way they are becoming sustainable is by switching from cardboard “boats”, what the tacos are served in, to 100% biodegradable ones within the next 4 months. This will allow waste to be even smaller coming from Barrio. The taco innovations mainly come from Executive Chef Nico, “Most of the monthly special tacos come from me. There are various times where employees give me ideas of what would be good, and it helps a lot, but when it comes to the best way to make them, and the ingredients, that is all on me.” Being that Barrio has been the most popular restaurant in Kent since its opening, agreeing that these tacos are great is something almost everyone in the community can do.

The impact of the restaurant business is nothing but exceptional. Kent Barrio is the second-best-selling restaurant Barrio now has. It is shortly behind the Gateway location in Cleveland, Ohio, which is also almost triple the size of the Kent location. With the addition of the Kent location, the business itself has only become more profitable. It has given Sean, the CEO, the idea of opening new Barrios in other college cities. One location that is opening soon is in Lansing, Michigan. This has the same idea in mind that Kent did originally. Open a restaurant in a college town, Michigan State University very close by, with the potential for new customers, college students making fair wages, and increased revenue for Barrio and the City of Lansing.

Kent Barrio is a leading source in Barrio's new perspective of the best locations possible, and also one of the starting grounds for innovative ideas such as the 100% biodegradable “boats”. With Kent and Lansing soon to be working at the same time, the potential for increased revenue with Barrio has, almost, no limit.

The short term effects of the restaurant would be the “buzz” around it. When the new restaurant opened, they had a two hour wait time, every day, for two weeks straight. Eventually, this died down, overall decreasing the daily revenue, but the people who enjoy it come back time and time again. Nico noted, “Our busiest times are from 5pm till around 8 pm. During those times we have anywhere from a 1 to 2 hour wait time, and a constant flow of customers.” The long-term effects are the increased revenue for the city, the workers getting fair pay and work opportunity and the recycling/waste management Barrio has in mind.

By opening the restaurant in Kent, Barrio has committed to increasing its sustainability with the new 100% biodegradable boats. Not only do the boats allow Barrio to improve their "Cradle to Cradle" sustainability, it will enable them to reduce: costs, waste, and impact on the environment. With the creation of the Kent Barrio, business has increased, the number of employees has increased, customers who used to drive an hour for Barrio now only have to drive a few minutes which increases customer retention, and increased customer satisfaction. The business has increased due to the convenient location in Kent for Kent State students. The number of happy employees has increased due to Barrio's higher than average wage. The increase in customer retention is due to the location. Customers are satisfied with the location is well.

The increased wages Barrio pays allows employee retention as well as customer retention. By paying a fair and equal salary to their employees, it will enable employees to be happier with their place of work and when employees are happy the customer also benefits from the upbeat employees. Because of employee satisfaction, customers are greeted and treated well, which will likely cause repeat customers.

Two of Barrio's prominent societal benefits are: "Setting the industry standard" and improving the City of Kent's revenue stream. Barrio has "set the standard" within the industry by switching to its 100% biodegradable boats. These boats challenge other businesses to come up with sustainable designs to get food to the customer. Again, Barrio is creating revenue for the City of Kent, employees of Barrio, and of course, Barrio. By creating more walk-in traffic within Kent, it is allowing other businesses to thrive as well. For instance, if a couple goes to Kent for a Barrio lunch, they may walk around Kent afterward and create more walk-in business for the small "mom and pop" shops in Kent.

Switching to biodegradable boats, it is allowing for less plastic waste in the environment. Instead of using plastic baskets/boats, Barrio decided to use biodegradable means of getting customer's their food. As suggested earlier, customers who used to drive an hour to the closest Barrio are no longer doing so. They are essentially allowing customers to drive less, or even walk, in order to get their beloved Barrio, creating less vehicle gas emissions. 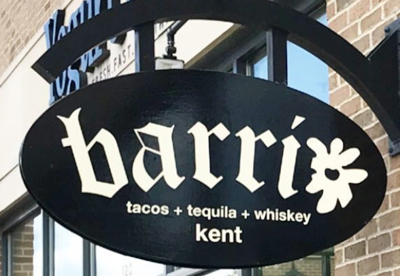 Barrio Tacos is a bar/restaurant that has 9 different locations around the US that serves Tacos, brunch, and a full bar. They not only have amazing food but a great atmosphere and great staff and vision as well.