In 2010, Mr. Gramopadhye was perplexed with one question: "How he can change the world and save nature?" Mr. Gramopadhye used to travel quite often to Sanquelim, Goa. He observed that there was a lot of waste after the completion of the mining project. Mr. Gramopadhye offered his services to clean up the mess and do something useful with it. He formed a team that comprised of a mining manager, Head of the Department of the Chemistry of the Goa University, and a friend of his whose hobby was pottery.

They tried to look at using the mining waste. However, after preliminary research, the team suggested that the clay left from the mining waste cannot be used in making bricks for building houses as they do not bind properly. Mr. Gramopadhye, though, was not ready to give up this soon. He got 14 samples of mud from different parts of South Goa to keep the testing going. Out of those 14 samples, he finally converted 2 into a shape of brick by just adding water to them. He, therefore, continued his testing and started experimenting with the process using various other ingredients. He made the first brick by taking help from his potter friend by providing heat to the brick in his oven. Little did he know that he would soon create a full-fledged business out of the same. However, he was still not fully satisfied with the process as he wanted to minimize the use of energy as much as possible to make the process completely sustainable.

Mr. Gramopadhye used the same idea of building a wall and building blocks. He started working on this ingredient. Getting lime in Goa was a difficult job. Experiments were done with cement wherein 5% cement was added with 95% mud. Sieves were used to sort out the mud and stones. Mud, gravel, and 5% cement were the new formula. Since mud was the main ingredient, a fire wasn’t required, therefore saving on the unnecessary emissions. Just building the blocks using the new formula and keeping them for 21 days did the trick as the cement in that duration hardened the blocks. This was an eco-friendly way, using eco-friendly materials to make blocks. The block was called “Earth Block.” 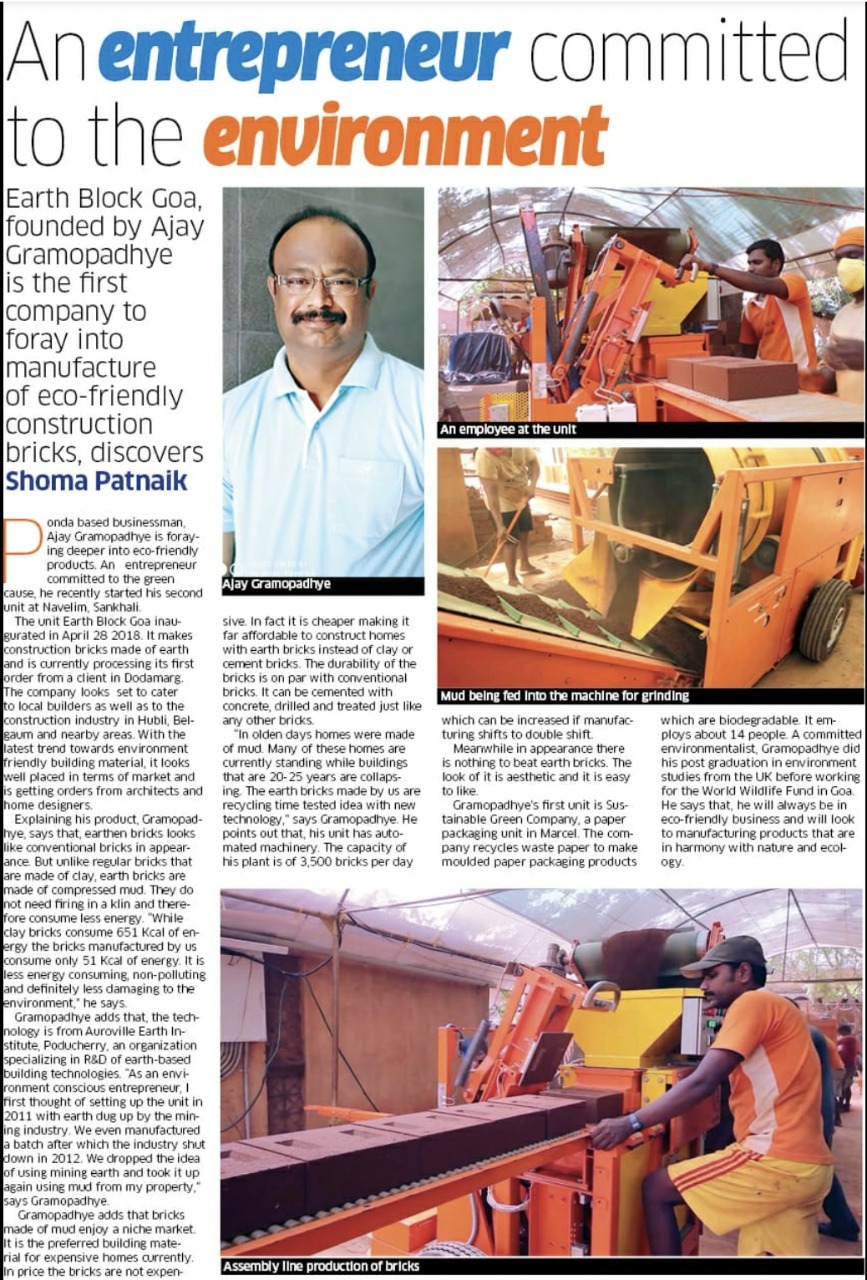 “All of you should have the mindset of entrepreneurship. Having more practical knowledge, exploring more entrepreneurial ventures, having good ideas, and implementing them would give you a great future. Solve the problems of people.” - Mr. Ajay Gramopadhye

Mr. Gramopadhye was always keen to know more about nature. He said that “I was inspired by the logo of World Wildlife Fund and joined Nature’s Club at a very early stage of his life”. Following his interest, he started reading and learning about wildlife. Within 2-3 years, he started conducting his wildlife programs. He went to the University of Strathclyde for higher studies and conducted various awareness programs to provide simple tips like switching off the light, closing water taps properly, etc. Sometime later he realized that he’s just imparting the knowledge, but he is not doing anything for the environment. This is when he wanted to start something of his own. He said that, “ I used my past experiences and came up with a solution wherein I could make something out of the waste."

Over the years, he realized that quality, ethical practices and determination to contribute to the environment are the only things that could take him a long way forward. His project was hurdled multiple times by the electricity department and pollution control board but he never gave up. He did not give a single penny as a bribe to get a green signal for his project. He followed his principles and ethically continued his business.

Very soon Mr. Gramopadhye started getting projects from various companies. He says, “If you give the right solution to the business, your business will always flourish

The project has brought in a lot of awareness about sustainable ways to do construction business. The government has provided funds for raising awareness and providing support to innovative start-ups. Mr. Gramopadhye utilized the “BMEGP” scheme which provided him the benefit of a 25% subsidiary.

Regular Clay bricks require 650 Kcal of energy to be produced. On the other hand, the Earth block requires just 51 Kcal as the heating process is avoided. They are also cost-friendly. The regular blocks used in Goa are Laterite blocks and their surface is uneven leading to a need for plastering of 10mm thickness whereas the walls built from ‘Earth Block’ have a smooth surface and the wall either does not need plastering or just a 2-3 mm thick plaster. The Earth Block is therefore economically better for society.

An institute named ‘Earth institute’ tested and found out that the Earth Block had 10 times more strength than the blocks that were made in their labs. The blocks could be used to build apartments of ‘G+3’ levels. These blocks could last for over 4 centuries, a staggering figure in comparison to cement blocks, that last for about 75 years. There is a lot of potentials that we can see in the venture and if the business is given a good platform it will flourish.

Earth Block provides sustainable solutions to its clients. Many houses and construction companies around Goa have relied on them for their brick solutions instead of using regular clay bricks. More and more companies are moving to sustainable construction methods. A large part of the reason is that consumers who are becoming aware of the environmental impact are preferring companies who are using sustainable materials. Further, the sustainable construction method is something that would help businesses reduce their overall costs. This is one of the biggest reasons why the bricks that are made in the Earth Block company are sold out even before the production starts.

However, the road’s not all rosy. The rainy season presents a challenge every year. As the season extends for more than 6-7 months, the operation in Goa becomes tough during that time. Furthermore, the shifting of the operations to another state is an expensive affair. It’s easier to take the machine somewhere else. However, the volume of mud when compressed changes when the blocks are moved which makes the transfer challenging.

Mr. Gramopadhye is also very open to sharing his ideas and technology with other budding entrepreneurs so that they can use the idea to start similar projects and spread it all over the country. Some Ministers from Zambia who visited the factory for the inauguration have also shown interest in this technology. He has also been invited to implement their plan in Zambia as there are many mines there. So, there is a lot of scope outside India as well.

Regular clay bricks take a lot of energy to be produced. On the other hand, earth block is a very eco-friendly process that emits less than 8% of the total energy produced in the normal bricks. Furthermore, the earth blocks also reduce the use of plasters drastically, making them very cost-efficient.

People who are living in the old houses are accustomed to it. However, newer home buyers are not aware of the idea. Mr. Gramopadhye therefore usually approaches architects as they are the voice of any construction site and they are the ones who primarily make suggestions to the customers. He targets architects and aims at creating awareness for them through presentations, providing them with a hands-on process. Architects have come for training too.

He is also involved in various other campaigns and programs that work for motivating the young leaders and making them aware of the problems that are currently faced by mankind and how sustainable ideas are the way to address these problems. He has hosted various seminars to educate and train youngsters who are working in the areas of sustainability and entrepreneurship. 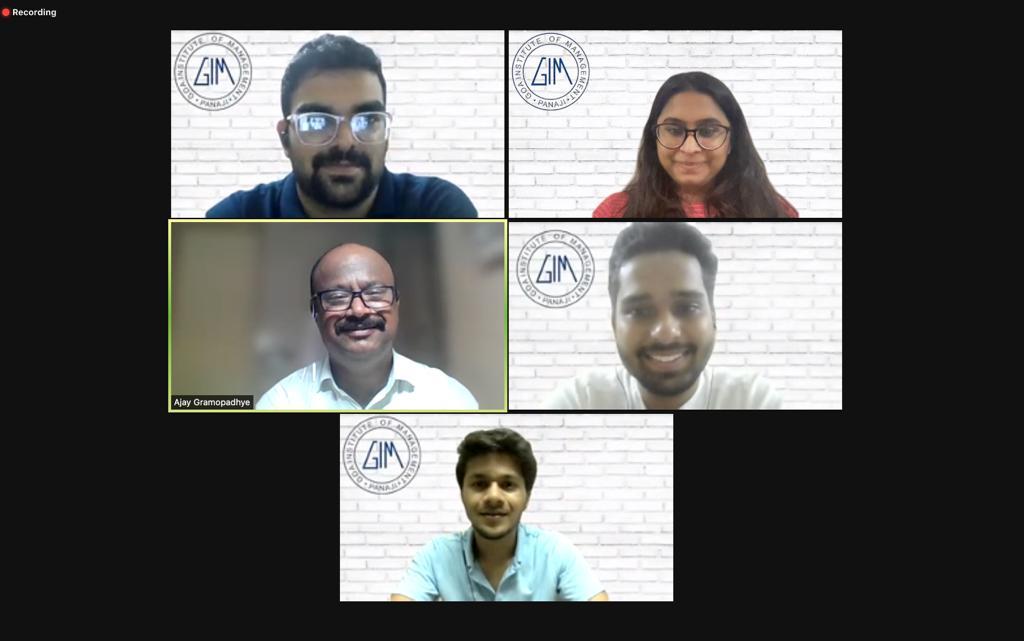 Earth Block, Goa is the first company to go into the manufacturing eco-friendly construction bricks made of coal-mine mud in Goa.

Founded by Mr. Ajay Gramopadhye, the earthen bricks look very similar to conventional bricks in appearance but are made of compressed mud and not of clay.