The PIPs Reward platform is capable of motivating a range of benefits not just personal but for planetary health. Some of the differentiating designs and features of the digital platform include an agile API for integration and generativity, a tracking system for evaluating, monitoring, and verifying actions. It also features a mobile user interface for games, tasks, and challenges to complete for rewards; but more importantly, it has ease of use and accessibility.

Over the next 3 years 3P Partners has a strategic growth plan to scale the PIPs Rewards platform targeting academic institutions as subscribers and developing more action partnerships with positive impact and socially responsible organizations. This admirable goal will probably be exceeded, as currently, there are a number of state university systems and prestigious institutions that have high interests in subscribing to the PIPs platform. There are also a number of well- known corporations that have expressed interest as action partners as well. This prompts me to believe that this platform has the capabilities and potential to extend its subscription services and platform for utilization in municipalities, government agencies, and NGOs. As Wendy Gordon stated in the interview, ”Our vision is for PIPs to be a ubiquitous ‘currency of good’ and the PIPs platform to be a central node within a digital eco-system of positive impact organizations that are making doing good and living well fun, easy and rewarding."

The University of Colorado-Boulder was the first institution to pilot and then to subscribe to the PIPs program. As a subscriber, the university chooses the behaviors on and around campus that they want to encourage among students and other university users - from riding the bus and recycling to participating in a fitness class or financial literacy module. They also receive regular reports on activity and progress toward Key Performance Indicators (KPIs) including number of users, number of actions taken, carbon footprint reductions achieved and participation by students in contests, challenges and special events. There is even an option for students at subscribing universities to direct their PIPs to pay for school expenses! There are now over 3000 student/users at UC-Boulder, with over 8000 PIPs users overall.

In addition to subscribers, the PIPs ecosystem includes other businesses and non-profits. These “Action Partners” integrate with the PIPs platform to reward PIPs to users who take actions they offer and can track – such as ride sharing with Lyft, bike sharing with B-cycle or completing a mindfulness module with Neuroflow Solutions.

Benefits accrue not just to the user but to the Action Partner, including user acquisition and retention. There can also be cost savings from the partnership. BCycle, for example, which awards for bike balancing, is finding the small price they pay for the PIPs awarded users far outweighs the cost in labor and fuel to move bikes from less popular racks to more popular ones.
The PIPs Reward platform is capable of motivating a range of benefits not just personal but for planetary health. Some of the differentiating designs and features of the digital platform include an agile API for integration and generativity, a tracking system for evaluating, monitoring, and verifying actions. It also features a mobile user interface for games, tasks, and challenges to complete for rewards; but more importantly, it has ease of use and accessibility. 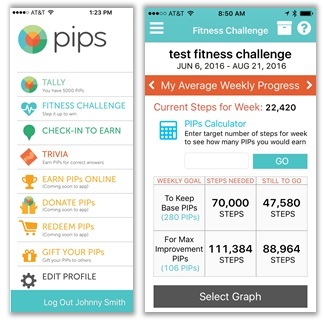 The inspiration of this innovation emerged from two college friends who had spent much of their careers trying to nudge either individuals or corporations to do the right thing: Wouldn't it be nice to get reward points not just for spending money but for spending money wisely and for making other smart choices - like walking or biking to work, opting for renewable energy or a certified pre-owned iPad, or choosing clothes based on where and how they were made?

Wendy shared the story of how the platform evolved from the initial prototyping to minimal viable product to a robust platform that’s now being used on university campuses. She emphasized that there was a lot of thought in the early prototyping stages of the platform design along with extensive research in the areas of sustainability, intrinsic and external behavioral drivers, gamification, conscious consumerism, finance, and socially responsible enterprises. The minimal viable product was a mash up of fitness tracking apps and behavioral strategy to turn engagement in a daily basic exercise – walking into a game like experience among colleagues in a workplace. This early-stage prototype, called the PIPs Fitness Challenge, received high recognition at the NYC’s BigApps Competition, and it was featured in the Huffington Post.

What emerged after further iteration was the PIPs Reward platform capable of motivating a range of benefits not just personal but for planetary health. Some of the differentiating designs and features of the digital platform include an agile API for integration and generativity, a tracking system for evaluating, monitoring, and verifying actions. It also features a mobile user interface for games, tasks, and challenges to complete for rewards; but more importantly, it has ease of use and accessibility.

Benefits of the PIPs Rewards platform are multifaceted. Firstly, the platform was designed by experts with a shared vision of sustainability, positive impact, and socially responsible principles.

As a certified B Corp, there is an internal structure of consciousness that resonates all three of the core dimensions of sustainability: People, Purposeful Profit, and Planet. Revenues received from subscription services, partnership agreements, and affiliate merchant programs are a necessary component for any private organizations to operate with capital.

The added benefit is that the platform provides an embeddedness of sustainability by partnering with other organizations that also have a shared vision of sustainable value and positive impact to society and the environment, while gaining economic benefits from the use of their products and services through the platform. Secondly, subscribers can gain significant benefits by influencing positive sustainable development behavior within their communities and universities. The generative capabilities of the platform allow subscribers to design what may be limitless tasks, games, or initiatives to manage and monitor the efforts toward good societal behavior and positive social cohesiveness. Lastly, the platform offers benefit opportunities for end users within a university or community. By simply signing-up and participating, students and everyday citizens can gain valuable reward points by completing tasks associated with sustainable development principles, and use those rewards for products and services from sustainability centered positive impact organizations. The platform design is the essence and gestalt of the triple bottom line. 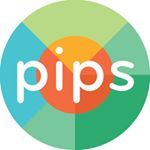 The PIPs Rewards platform is a mobile engagement platform and app designed to reward participants for doing good. Now, what are PIPs? PIPs (Positive Impact Points) are digital “social good” currency that are earned from socially and environmentally positive tasks. Simply expressed, users are incentivized for good behavior towards society and the environment. These earned PIPs can then be used for great deals on beneficial brands, music downloads, free nights at an eco-friendly resort, or even be used to gift points to friends. For the past two years, the digital platform has been piloted at the University of Colorado-Boulder and within the Boulder, Colorado community. And currently, 3P Partners, the Certified B Corp that operates the PIPs Rewards platform, is in the process of scaling its digital innovation by developing new business partnerships and expanding the utilization of the platform within other university systems, businesses, and municipalities.