The "Organik" Walk to a Healthy Future

JustOrganik is a food and agro-based business which essentially aims to provide organic and healthy food to end consumers. It also works with farmers to make sure that the produce they sell uses organic farming techniques. The business promotes a sustainable way of conducting business. JustOrganik promotes good health and wellbeing, works at creating better and sustainable cities and communities, and aims at generating innovation, which are some of the core UN SDGs.

JustOrganik was founded in 2013, by Mr. Pankaj Agarwal, who has a vision to create a change. With their current hashtag -- #FarkTohPadtaHai, Mr. Agarwal wanted to create a lasting impact in the world of food that we consume. JustOrganik links farmers from the state of Uttarakhand and sells their produce, which is often very healthy and sustainably produced. Based out of the Himalayan ranges for their produce, the business operates with multiple regions of different climates and soil conditions. This is a factor that can be taken advantage of to produce a wide range of crops.

JustOrganik has set up farms wherein more than 4000 farmers practice organic farming techniques to produce agricultural products. This is then sourced by the JustOrganik team and stemmed out to end consumers through retail channels. The main aim of JustOrganik is to promote sustainable food and well-being not just to consumers but also to farmers. They wish to educate more and more farmers about the impact organic farming can create on nature. "JustOrganik works with the intent to stay true to the rules of Mother Nature, to walk as one." says Mr Agarwal.

Not just sustainability, Mr. Agarwal started his business by hiring people who had mostly never worked a day in their lives; they were essentially people without any prior experience of any job at all. He says that, food is something that everyone is familiar with, they cannot go wrong with it because healthy food is a necessity. So, while he solves the problem of the employability of people, he also resolves the issue of creating a better economy alongside a sustainable one. 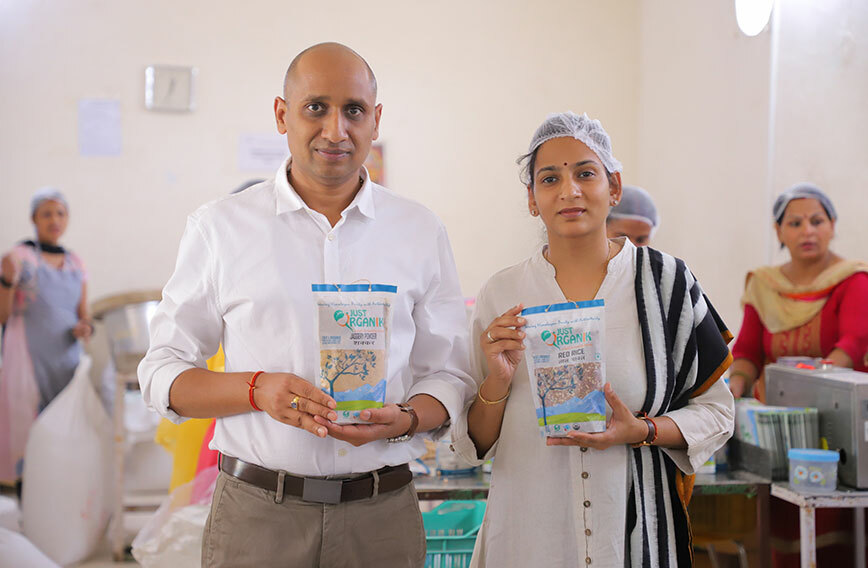 "Producing the real thing is the biggest motivation," says Mr. Pankaj Agarwal, founder of JustOrganik. He started this business with his wife and brother in his basement. With a vision in mind and a will to create an impact, JustOrganik came to life. After working in the corporate sphere for almost 16 years, he desired to have something of his own, which made the world a better place; not just for him but for everyone.

What Mr. Pankaj mentions as a "life-changing event" that happened to him in 2013, he started viewing food in a different light. He mentions that there are three primal needs of a human being to survive-- Air, Water & Food. Air and Water are beyond a human's controlling ability. Food remains something that we can control and make better use of; it is real. When an individual consumes a food item, they will most definitely feel a distinguishing difference. Something that is good, tastes good and makes you feel good, will always receive a changing perspective. The founder of JustOrganik aimed at providing good, healthy, and sustainable food to consumers, which especially did not come at the cost of Mother Nature.

The innovating idea of the business that JustOrganik promotes healthy living and wealth generation through that. It provides farmers of the Himalayan zone a livelihood, and an understanding of the best practices which promotes the wellbeing of Earth as well.

Apart of employability, consumers are at an all-time high demanding space, wherein they want to live a healthier lifestyle. Organic produce is the way to go. Often times, due to greenwashing by certain organizations, especially to garner profit margins, it cannot always be ascertained that the organically produced product is actually organic and good for health. JustOrganik directly sources from farmers and provides the products to end-consumers, to generate trust and faith on the mission.

The long-term goals and effects of JustOrganik might reflect increased scalability and increase in margin of investment. Currently, the business focuses on Sustainability instead of revenues, and this is where the impact might be seen in long term, as the adoption rates increase.

As mentioned earlier, JustOrganik promotes a sustainable business more than a profitable business; they want to create an impact -- as their hashtag suggest. While the business started with just 3 people in their family basement, the employees hired have stayed on the lower side, while they slowly but surely build themselves up. The employees are mainly people who haven't been employed before. With 4000+ farmers under their care, JustOrganik keeps growing everyday. JustOrganik retails through multiple e-commerce partners such as Flipkart, Nature's Basket, Amazon and many more.

The produce for JustOrganik is grown in the climates of Uttarakhand, which is pure and is free from much pollution that often plagues the rest of the country. The Himalayas provide enriched soil and water, which adds on to the organic practices of the produce.

JustOrganik is not only focused on providing organic food, but they also wish to generate lasting awareness of the essential needs of good food, and people's right to healthy food. JustOrganik has started expanding their operations to other enriched soils in India as well.

JustOrganik is an agriculture and food processing business that makes organic food more obtainable and easy-to-get for a normal person. The business works to bring farmers in who are capable of adopting farming which is organic in nature. Their main objective is to create safe and sustainable food which is more accessiblefor consumers and to create a platform through which farmers can generate a steady income.