Any leaf which falls from a tree has a shelf life of three days after which it gets extremely dry and can be easily crushed into crumbs. Banana Leaf Technology has come up with a radical solution where the leaves’ physical properties can be enhanced making them last up to one year with their natural green color without the use of any chemicals and up to three years without their green color with drastically improved durability and toughness from which biodegradable cups and plates can be made.

Deforestation and climate change are two of the worst forms of environmental problems the society is facing today. If this technology and business is scaled up, plastic use may be eliminated, saving the land and ocean life alike.

The company believes that humans when united bring greater good. Success for Banana Leaf Technology is about impacting human lives.

If scaled up, it could potentially disrupt the entire plastics industry while simultaneously saving life on land and water and subsequently impacting climate change.

The Banana Leaf Technology was formulated in 2010 by an 11-year-old Indian boy, Tenith Adithyaa, in a rural part of southern India in his very own homemade laboratory. This technology was inspired by his dream to create a superior, sustainable bio-material to put an end to the current environmental crisis. His will to revive the forgotten traditional Southeast Asian practice made this research an emotional struggle to the inventor that he longed to make a global habit in this modern era.

It all began when the young inventor saw farmers dump heaps of leaves as trash due to the lack of a preservation technology, causing a huge economic void. The spark ignited when a question came to his mind. “Can these leaves be enhanced biologically?” he wondered

By trial and error, the initial phase of preserving the leaves for about a year without using any chemicals was created in October 2010. As time passed, the technology advanced to cellular enhancement after four years of research and development.

The technology enhances cells, strengthens cell walls of leaves and prevents pathogenic agents from destroying the cells. These processed bio-materials are biodegradable, healthy, pathogenic resistant, human-friendly, completely eco-friendly and are a viable replacement for disposables. This technology creates materials that are completely customizable to make products suitable for any application. Banana Leaf Technology is currently capable of producing more than 30 products that significantly dominate the disposable markets. The first international award for this technology was awarded at a global invention fair in Texas in 2014. 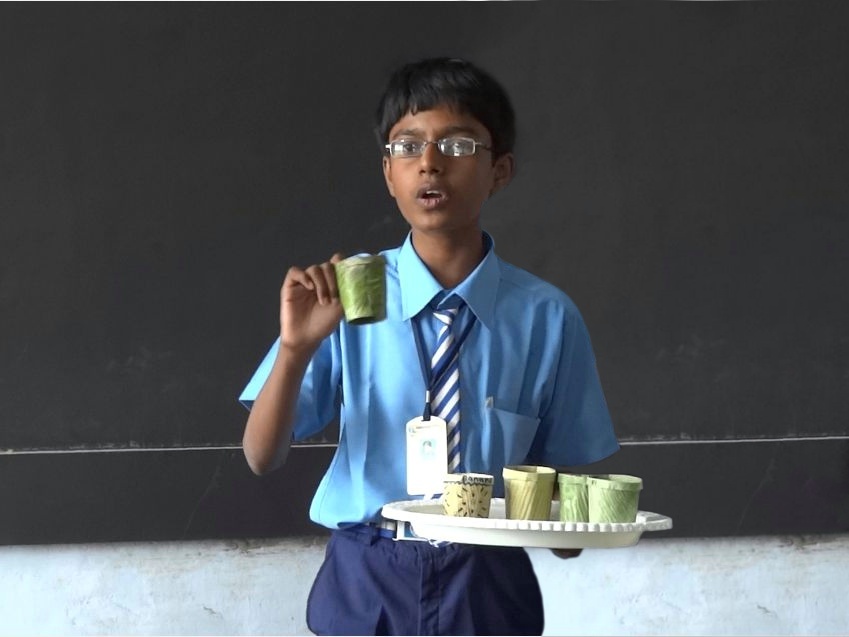 Adithyaa, company founder, said he had an awakening when he saw farmers dumping heaps of leaves as trash. Indian weddings are examples where disposables, like plastics, serve their purpose for just 10 minutes and end up in trash, damaging the ecosystem.

When asked what led him to make this career choice at such a young age, Adithyaa replied, “Mother Nature offers us everything we need. It’s up to humankind to make the right choice. Our failure to grasp the effect of the absence of an alternative, biodegradable, disposable material has been fueling this climate epidemic so far. Nature and mankind should coexist in every aspect to create a sustainable civilization.”

Adithyaa, age 20, sees innovation as a means to create a sustainable human civilization, where modern technology is a tool of that process. Self-driven in both his professional and social life, he believes his humble origins are what made him the man he is today. He explained an incident which showed his motivation and courage to succeed, seldom seen. “Once, during a chemical experiment in my lab, I inhaled dangerous fumes, after which I had to be hospitalized. While lying on the hospital bed, I told my parents, ‘Science needs sacrifice,’ which frightened them so much that they never allowed me to work with chemicals thereafter,” he noted. “Few setbacks don’t affect my journey.” He added that “To make this world greater and leave the planet better than we found it,” is the driving force that led Adithyaa to create the Banana Leaf Technology as an organization.

The processed bio-material produced from this technology is totally chemical-free, animal fodder, cost-effective, 100% bio-degradable and goes back into nature when discarded in 28 days as opposed to plastic and similar products which stay in nature for around 7,30,000 days. This solves the global landfill crisis that results in constantly rising heaps of garbage which amount to more than 1 billion tons per year, reaching up to Mount Everest, and prevents the death and cruelty to 200 million land and aquatic animals.

Scaling this business on a large scale will directly help governments across the world to implement the ban on single use plastics much more effectively. It costs one cent to process a single leaf which shows how economically viable this business can and has become.

In the context of the business, monetary aspirations are considered as a by-product rather than a final goal. It has been proved to the business world that success and wealth can be gained even by upholding morality and ethics. There has never been any compromise on the values in the business.

Banana Leaf Technology is a business which consists of Adithyaa and 10 employees. It’s a start up with a vision. Since banana leaf preservation technology is applicable to numerous materials and applications, the usage of these products are countless. They cover various industries and it is an alternative to most fast moving consumer goods. Because it is an FMCG product, no single company can produce and deliver the global needs alone. He believes the vision of a cost-effective biodegradable choice must be available to all human beings regardless of their geographical and economical boundaries. The company currently sells the technology license worldwide to any company which shares the vision to make this planet a better place for all living beings. The licence to this technology once bought, will be granted for a lifetime to operate.

Like any entrepreneur, Adithyaa also saw this opportunity to create a sustainable business in the disposable tableware market estimated to be around $30 billion through this innovation.

Adithyaa and his innovations have only one message: “Find a cause greater than yourself in your life and sweat for it to achieve abundance,” he maintains.

He also believes Nature and mankind should coexist in every aspect to create a sustainable civilization. The banana leaf technology, the innovation inspired by the dream to create a superior sustainable biomaterial, will greatly reduce the current environmental crisis. This humble initiative to save millions of trees, will direct a path for humanity towards saving the environment with the promise of a circular economy.

This innovation, once implemented and adopted on a large scale across the world, intends on saving 4 billion trees, 200 million land and aquatic animals and a reduction of 3.2 billion tons of greenhouse gases. This technology would also reduce the usage of disposable plastic by 39% and disposable paper use by 34%. According to Banana Leaf Technology, they satisfy 10 out of the 17 UN’s Sustainable Development Goals which shows that a business can be profitable and benefit the environment at the same time. Sustainability and profitability in this day and age can go hand in hand to achieve amazing results in business.

Banana leaf technology is a cellular, eco-friendly technology that preserves leaves and organic bio-materials for a year without the use of any chemicals. Naturally, leaves and most bio-materials degrade within a shelf lifespan of three days and are discarded as waste. This technology enhances the leaves' physical properties thus making a viable biodegradable material alternative to both plastic and paper.