The Fightback against Fast Fashion

Pure Clothing’s sustainable organic cotton clothing brand offers a sustainable alternative to fast fashion brands. They use only recycled materials to make their products and have vowed to forever put sustainability at the forefront of what they do.

Pure Clothing is transparent with the work they do and the different certifications they hold. All their clothing hold- gold standard certification in matters of material quality, and some of the certifications are - GOT (Global Organic Textile Standard); this is the world’s leading body for organic fibres production and ensuring traceability at every stage. This also guarantees that the cotton grown is chemical-free and organic, PETA certified - that ensures that the product is vegan friendly, which specifies that the product has no animal-derived element and unlike other brands, the product is not tested on animals. OEKO-TEX certification that Pure Clothing holds ensures that they comply with the EU regulations, a safety standard that ensures that fabrics used are free from toxic chemicals and harmful substances. Lastly, the GRS (Global Recycled Standards) - a voluntary product standard for tracking and verifying the content of recycled materials in a final product. It also sets requirements for third-party certification of recycled content, chain of custody, social and environmental practices, and chemical restrictions. Along with this, Pure clothing garments are embroidered in wind-powered units by Jimmy and Patricia Walsh for making environmentally conscious Clothing and also look out for recycled products, plastics and waste and textiles to recreate new sustainable Clothing, and the recycled polyester labels are sewn on with an organic cotton thread by the team at Ballina costume company. The fabrics and fibre the company uses less water and exert less waste, making these buys eco-friendly. It’s called for sustainability, without compromising your unique style.

The company also makes sure that its workers are provided with a living wage and safe working conditions. All of Pure Clothing’s packaging is made with recyclable materials and are printed on with a water-based ink.

The tissues produced by Pure Clothing are made from recycled content and inked with soy-based ink. They also include product information on a sheet of seed paper with every order that can be planted after use to grow flowers that are rich in pollen and nectar, which is great for pollinating insects like Bees. Pure Clothing has an initiative called “Restore with Pure” that allows the customers to return their clothes for repair instead of dumping them in landfills. This gives the customers the power to keep their items in use for longer through repair and upcycling. 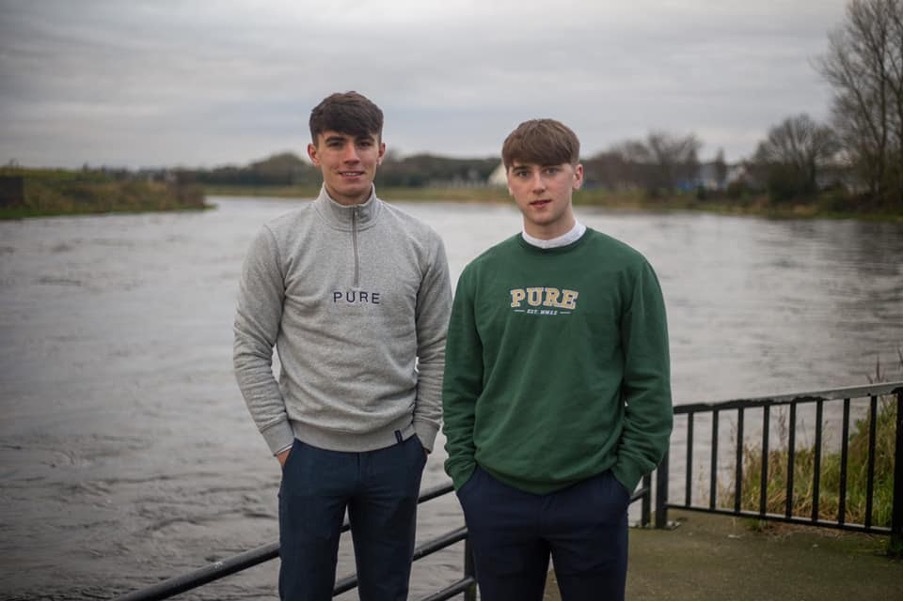 The founders of Pure Clothing, Peter Timlin and Richard Grimes, had always been passionate about enterprise. They began working together in secondary school during transition year in 2016 as part of the F1 schools’ competition, the largest STEM competition available to secondary level students. The pair were successful and got to travel to Malaysia for the competition finishing eighth in the world. This introduced the pair to the world of enterprise. Peter and Richard took the skills they developed from the competition and started their own digital marketing company. Attigo Digital marketing company focused on providing web development, social media marketing, and videography for smaller local businesses around Peter and Richard’s local area. This venture helped the pair develop their skills which they would use to start up Pure Clothing.

Peter and Richard had always been interested in the sustainable fashion movement and had noticed a rise in the one-wear culture in Ireland and were conscious that that was a growing issue in Irish society, especially with younger age groups. They also noticed that there weren’t many alternatives to the fast fashion brands that contributed to the one-wear culture. Peter and his family were particularly aware of the issue and rise of fast fashion in Ireland. His family owned a drapery store started by his grandfather, which Peter’s father ran. The Drapery shop was forced to close in 2017 due to the impact of fast fashion and the arrival of fast-fashion retailers into the area who availed of using cheaper materials and labour. The use of cheaper quality resources created a price point that Peter’s father could not compete with without compromising on the ethics and principles that he would have had in the business.

Peter and Richard saw the impact of fast fashion and how it affected small Irish businesses such as Peter’s father’s drapery store and thought It was time to fight back against fast fashion and the one wear culture that has become part of Irish shopping culture. The pair set up Pure Clothing with the goal of creating a sustainable business with the ethics and focus on quality Peter learned from his father at the core of the business. Peter and Richard not only wanted to provide sustainable fashion to people but also educate and change people’s mindset around sustainable fashion providing information on the benefits of a circular economy and the importance of recycling and repairing clothes. Changing people’s mindset around fashion is a significant factor behind Pure Clothing and its effort in building a more circular economy in Ireland.

“Trying to get people to switch that mindset, focus more on keeping stuff away from landfill, quality, and longevity”

In the beginning, when Pure Clothing company shared their idea to motivate people through an online video on a social media platform about their product and business model, that had an immediate impact. It gained a lot of followers and helped them gain good popularity with around 140,000 views. On the day of the launch of the company’s e-commerce store, Pure Clothing received a tremendous response, and within a short period of time they had started receiving a large volume of orders. Also, their business model gained the attention of a lot of young followers.

The long term impacts of the business innovation are:

Changing customer attitude towards sustainability: Looking at the high quantity of orders, it is evident that people started supporting their mission of producing sustainable and long-lasting products. It has somewhat changed the mindset of many people in spending a bit extra on their products, which are durable and would last longer than three years rather than paying a bit less but multiple times on products that can only be used for a shorter time period.

Educating consumers on sustainable practices: At times, the company uses second-hand clothing products as they focus on recycling rather than wasting materials. It also encourages people to repair the products rather than get a new one.

Reducing Material Waste: Another important thing is that they have reduced waste as they focus on using eco-friendly materials to produce their long-lasting products. They also concentrate on recycling or repairing items rather than wasting materials or resources to make a new one. Many clothes or similar products get dumped in landfills; therefore, Pure Clothing ensures that there is a sound reduction in the amount of waste, which would keep the environment cleaner.

Pure Clothing had a very clear goal of what they wanted to achieve. Initially, they ran a social media campaign and through the advertising, they gained a lot of followers and received a huge response from people. They have put in a good amount of effort to establish the business on clothing products which are produced with the help of eco-friendly materials. They eventually gained a lot more followers, including many young followers, which has had a significant impact on their business.

Boosting the number of sales - On the launch night of their eCommerce online store, they had recorded an outstanding amount of sales which has been very impactful for the growth of the business and boosted their morale for going forward.

Encouraging Consumers - A large number of sales, especially on the launch night and even now, is a good way to justify that people are willing to be a part of the company’s mission in following a sustainable trend.

Best Project Award - The company was awarded as the best project in Natural Environment because of their efforts in sustainability at the Business Spirit Awards, which focuses on responsible innovation.

Economic Growth - A large volume of sales resulted in more revenue which in turn helped them grow more and helped in their economic growth and stability.

Boosting Market Position - With the help of their strategy and innovation, they have gained numerous followers. As a result, their products are getting more popular, and consumers are getting more inclined towards following a sustainable trend. This has helped a lot to boost their market position in the country.

Creating Brand Awareness - Pure Clothing has developed a unique way of making eco-friendly Clothing, and this innovative thinking attracted many consumers to be a part of their mission and giving preference to long-lasting products have helped this business to create an awareness of their brand in the entire country.

Increased Profitability With Lesser Waste - As the company follows a trend of recycling and repairing the used products rather than discarding them after a single use helped a lot in reducing waste and also increased their sales which ensures a lot less cost of production and a good amount of profit.

In the face of an ever-increasing global material footprint with all its adverse climate and ecological impacts, Pure Clothing sets a good example by producing sustainable clothing products while using a sustainable supply chain. The efforts Pure Clothing make in sustainability stretch far beyond their products. They nourish a culture of innovation and activism in everything they do and work with the community to make a positive environmental impact.

We live in a world wherein every five minutes, 3 tons of clothes are dumped into a landfill, which is not a sustainable trend. Pure Clothing is trying to get people to switch their mindset to focus on keeping stuff away from the landfills by keeping the circulation of clothes longer in society. Its products are made to last, and by doing so, they try their very best to achieve a circular economy as a commitment to the society at large. Every aspect of their packaging is as fair to the planet as possible by using packaging boxes made of recycled content and fully recyclable.

Pure Clothing’s goal to build a stylish, modern clothing brand using sustainable supply chains and eco-friendly materials is a benchmark for other companies in the clothing industry to follow. All their garments are embroidered in a fully wind-powered unit, thereby tapping the potential of using renewable energy without contributing to the direct emission of greenhouse gases. They are partnered with the Irish tree planting charity Easy Treesie on a project to plant 1 million trees in Ireland by 2023, with over 1000 trees already planted.

The ‘Restore with Pure’ initiative undertaken by Pure Clothing enables the consumers to keep their items in use for longer through repair and upcycling. Cutting down consumption by increasing the lifespan of one’s clothing is a great way of helping our planet. Pure Clothing’s business model not just only sell their products to consumers but also help them adapt to a more responsible lifestyle. By being a responsible producer, Pure Clothing tries to spur economic prosperity while leaving a net-zero carbon footprint, effectively contributing to a healthy environment and improved human well-being.

Pure Clothing is a partnership founded by Peter Timlin and Richard Grimes, which operates out of Ballina County Mayo in Ireland. The business was founded in 2020 with the goal of bringing an alternative to fast fashion clothing to Irish consumers with stylish eco-friendly products developed through a sustainable supply chain that incorporates Irish businesses that share the same sustainable vision. The company aims to help grow the culture of innovation and activism within communities to help create positive environmental change across Ireland.