Tea Done Right: Good for the Soul and for the Globe

When describing the innovations of Numi, it is important to look at their business model holistically. There is no singular innovation to highlight, but rather a collection of exceptional choices and implementations made deliberately in the pursuit of global good. Numi has built itself upon an awareness of ecological impacts, earth-to-earth production and packaging plans, and social initiatives that give back to and look out for the communities that make their production possible. Numi Tea directly contributes to many UN SDGs such as responsible consumption and production, life on land, and clean water and sanitation. The company's contributions arise not only within its ecologically-sound production processes but also from the Numi Foundation, an organization created and maintained by the company that is dedicated to community improvement and wellbeing.

Numi prides itself on using over 130 different organic ingredients, and 85% of these ingredients can be traced back to the farm level. Using organic crops means there is no exposure to pesticides and other synthetic, potentially harmful substances for both the workers and the crops. The company is also Climate Neutral Certified, meaning it takes proactive steps to measure, reduce, and offset its annual emissions. After being safely produced, the teas are packaged in compostable, plant-based wrappers. The paper is lined with a sugarcane-based polylactic acid and metalized eucalyptus which keeps the tea fresh, and the plant-based design ensures that there will be no toxins released when the wrappers break down.

Numi has formed strong, collaborative relationships with its farmers--some of these relationships have existed since the first day of production over 20 years ago. Organic certification, Fair Trade Certification, and/or Fair Labor Verification are all used to guarantee the legitimacy and transparency of the company's sourcing standards. Interestingly, Fair Labor Verification was actually created by and for Numi. “There were several of our farming partners that did not fall under the umbrella of Fair Trade,” Hassani reflects, “and we didn’t really like that.” She and her coworkers knew that these farms were still being run ethically even if there was room for improvement, and they did not want to simply abandon them. Instead, they created the Fair Labor Verification system which “ensures that people aren’t working overtime, or if they are that they’re getting paid for it.” Numi goes above and beyond for its workers, both domestic and international, to make sure they are not being exploited or mistreated in any way.

Not only is Numi conscientious of its environmental impacts from production and the conditions that employees and farmers work under, but the company also has several different programs it funds and maintains. These programs promote community growth and improvement, and they are contained within the Numi Foundation. One such program is called Together for H2Ope; it began after the realization that clean water was essential for the use of Numi products and yet some people did not even have clean water for drinking and bathing. The company's mission is to provide access to safe drinking water and filtration systems for the farming communities and organic tea partners. Another initiative is the Numi Curriculum project which brings social studies, gardening, and art classes to elementary schools in the company's home base of Oakland, California. These courses encourage creativity, confidence, and awareness, and were created by professional curriculum developers to ensure the courses met common core standards. Most recently, Numi has responded to the COVID-19 crisis that has wreaked havoc on the financial stability of many families. Increased instances of unemployment and decreased working hours brought on by nationwide business shutdowns have left many already struggling families with no source of income. Numi has teamed up with Salesforce.com, an American-based software company that specializes in customer relationship management, to offer food support to families that have been impacted by the pandemic in Oakland and the Bay Area by providing them with access to fresh produce. 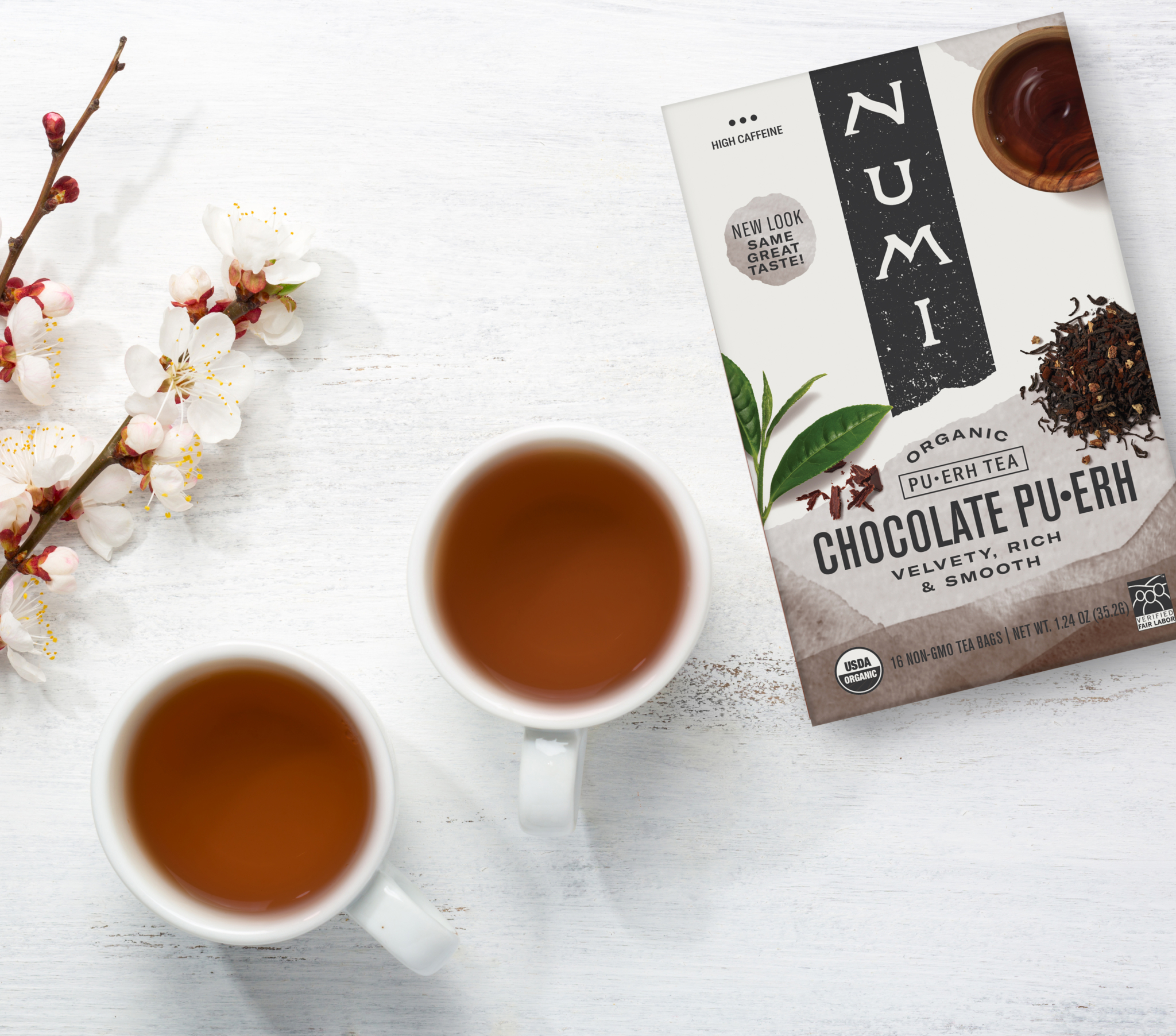 Although they can seem unrelated at first glance, all of Numi’s innovations stem from a similar aspiration: the desire to be more than just a tea company. Some have specific inspirations, such as the connections between clean water and tea that sparked the flame for Together for H2Ope or the decades-long loyalty to the farmers resulted in Fair Labor Verification, but behind all of these innovations is an understanding that businesses should be about giving back and acting for the greater good just as much as they are about producing a good. Never in my interview with Hassani was their discussion of how Numi could be making more money or what markets the company could go expand into; the focus did not stray from the tremendous strides the company has already made and the fact that it is still trying to reach more people, raise more awareness, and “keep digging deeper to get more equity all around.”

First and foremost, customers can feel confident in their consumption knowing that Numi’s ingredients are clean, safe, and fresh. They also can take comfort in the fact that their purchase supports workers who are being treated fairly without risk of exploitation thanks to the Fair Labor Verification and Fair Trade Certifications that Numi helps its farmers to implement. After consumption, customers must only take the necessary steps of disposal to ensure that all pieces are composted or recycled accordingly--when done right, there should be no part of the product sent to the landfill.

The plant-based wrappers initiative combined with the eco-friendly boxes that the products are packed in allows the company to vastly minimize its energy and water consumption, intake of natural resources, and waste production. Annually, Numi conserves 2,200 BTUs of energy, 3,800,000 gallons of water, and 3,000 trees, and diverts 310,000 pounds of landfill waste. The company's organic ingredients are also just as good for the Earth as they are for the consumer; they promote ecological harmony, soil health, and biodiversity by leaving behind minimal impacts and aiding natural growth cycles. Because Numi always strives for more, the company takes it a step further with Climate Neutral Certification, setting the tone for other businesses to do everything in its power to leave no trace behind.

The company's social initiatives have had impressive positive influences on the communities in which they are implemented. The Together for H2Ope clean water project has helped transform the lives of over 10,500 farmers in Madagascar and India so far and the projects are led in close cooperation with the members of those communities to ensure long-term plans of water access for future generations. The Numi Curriculum project in Oakland has enrolled over 500 kids from Title 1 schools, and Numi does not plan on stopping until all 8,500 students of every low-income school in Oakland Unified School District are given access to the program annually. Lastly, the COVID-19 Oakland/Bay Area relief program has provided much-needed support to families that needed it most; over 200,000 pounds of fresh produce have been distributed to date. Local farmers also benefit from the food relief initiative; the farmers have been struggling to find buyers for their produce due to restaurant closures, and this program helps cut down on potential waste. Numi hopes to transform this relief initiative into a permanent program where residents would be able to pay $10 a week for a bag of fresh, locally sourced produce. This would be a huge step in making healthy food options more available for low-income communities who may not normally be able to afford these options.

When asked if Numi’s social initiatives had helped their profits or media presence in any notable way, Hassani gave what I would consider the best possible answer: “I don’t know, to be quite honest.” Rather than being motivated to act responsibly because it resulted in huge sales increases, Numi acts responsibly simply because it feels that it should. It is not enough to say that Numi cares about helping, there must also be the substance behind the statement and enough transparency to really prove it. Is there a positive correlation between the good the company puts out into the world and its sales? Most likely. Especially when you take into account how important socially aware companies are becoming to younger generations, but it is not something that can be traced in or done for the numbers. “You don’t see that return on investment in the same way you would a coupon...it’s indirect.” And that’s okay.

The company's environmental responsibility, on the other hand, shows up less ambiguously in the profits. Companies that specialize in consumer trends have recently found organic and Fair Trade tea to be outpacing the sales growth of conventional teas. This is understandable as environmental issues continue working their way into mainstream media as consumer awareness continues to increase. It also ties into the aforementioned accountability younger generations expect out of businesses; there can be less desire to support an organization that exploits without remediation than a company well-versed in complex ecological interactions.

There is no denying the fact that this is a company that benefits society and the environment. Numi devotes large portions of its time, money, and energy to ensure it has a positive influence wherever it goes, from the farms that grow the leaves to the customers that rave over the teas. The process starts with organic growing, an absence of synthetic chemicals, and ethical working conditions. The product is then packaged with environmentalism in mind, and consumers are encouraged to partake in helping Numi have as little impact as possible. Workers and community members of Numi operations worldwide are looked after with compassion and support, and the company does everything in its power to help the farmworkers thrive just as the office workers do for the company. I do not think there is a selfish motive anywhere in this company; every choice is thoughtfully planned out to either protect, promote, or provide for communities and the environment.

Hassani and her team integrate authenticity into every part of the process, and the company is so successful at being authentic that anyone browsing the website can pick up on it in a heartbeat. Check out the company blog, the slogan of which is “Join our movement for a better world” and which contains articles on everything from racial injustices to DIY eco-friendly gift wraps idea, navigate to the “Impact” or “About Us” tabs to delve deeper into the intentionality behind each choice the company makes, or read more about the tea's product information--seeds of virtue have been planted on every page. Businesses built and maintained with the intention of goodwill succeed in bringing good into the world, and that is what Numi is all about.

From Numi’s start 20 years ago to today, it has been a company that does much more than just make tea: it is a source of support and growth for its communities and workers; it holds itself to a high standard of continuous learning and advancements; and most importantly, it is a prime example of all the good that is possible when a business is made with just intentions. Co-founder and chief brand officer Reem Hassani put it best when she said, “If you’re creating a product that you're putting into the world, you should try to do it as environmentally and ethically sound as you can. Businesses can be a force of good. That’s how I feel about it, and I hope...that we can be an influence for other businesses and people.” Hassani understands that companies are responsible for more than just making products--they also have a duty to reciprocate some of the good they have received.