Taking the Sting Out of Stigma

Sweet Beginnings is a social enterprise and wholly-owned subsidiary of the North Lawndale Employment Network that produces and sells local raw honey and honey-infused skincare products, which are sold under the name beelove. Individuals who have previously been incarcerated work for Sweet Beginnings as beekeepers and makers of beelove products. The beelove natural honey and skincare line are available for purchase both online at beelovebuzz.com and at locations throughout the Chicagoland area. By hiring citizens from the local neighborhood without discriminating based on prior records, Sweet Beginnings has created a supportive community which brings economic and social benefits to the entire region.

Sweet Beginnings was founded by Brenda Palms Barber in 2005 to fill a community need for employment opportunities for workers who had been previously incarcerated. Since then, hundreds of former inmates have gone through Sweet Beginnings’ transitional 90-day program and afterward have gone been connected with other employment opportunities in the community. Because Sweet Beginnings is a subsidiary of the North Lawndale Employment Network, Brenda and her team connect people who need jobs with businesses who need employees. The job placement rate of former Sweet Beginnings employees is an impressive 70 percent. Of course, some transitional workers also stay on with Sweet Beginnings in permanent, full-time positions. For example, Charlotte Austin has become the Lead Production Assistant for beelove. “It’s really rewarding when employees come in and they learn production, they learn inventory, they learn building the materials. It’s fun working with them,” she said, “I don’t judge them because they walk the same footsteps I have.”

Sweet Beginnings has 5 different apiary locations in the city of Chicago, including one at O’Hare International Airport. The natural honey they produce is not only delicious, but is also a wonderful anti-inflammatory addition to their skincare products which include lotions, salves, lip balms, and body scrubs. Sweet Beginnings’ newest project is the creation of the Worker Bee Cafe, to be located in Homan Square in North Lawndale. Construction is predicted to be completed in July 2020. The Cafe will partner with Metropolis Coffee to serve honey-infused beverages and food items. It will also be home to a rooftop apiary which will be open to the general public for education and outreach. Employees of Sweet Beginnings will be able to work in the cafe and train as baristas. Naturally, cafegoers will also be able to purchase jars of beelove honey. The location of the cafe within the community is expected to revitalize the area as well as create work opportunities and community space for residents. 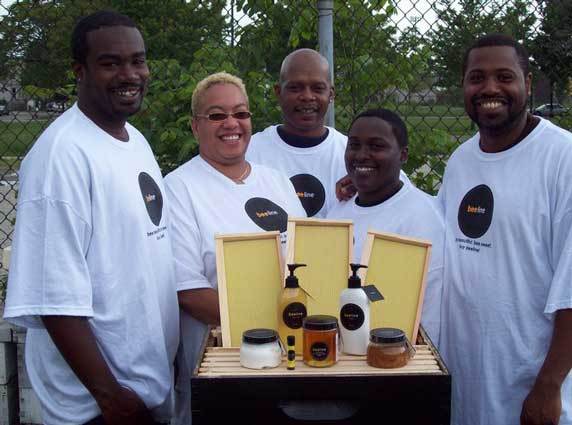 North Lawndale Employment Network (NLEN) has established a job-readiness program called U-Turn Permitted which helps formerly incarcerated individuals transition back into the workforce. As the C.E.O. of NLEN, Brenda Palms Barber grew frustrated when U-Turn Permitted graduates were unable to find jobs upon leaving the program. Most commercial hiring practices today include background checks and employers generally do not hire applicants with a criminal record. By barring these individuals from obtaining legal employment, people are often forced to turn back to illegal activities in order to make an income, which in turn increases the recidivism rate. It was this dilemma that spurred Barber to come up with a creative and groundbreaking solution. Barber and her board at the North Lawndale Employment Network brainstormed a number of different jobs that could be suitable for graduates, including landscaping, motor repair, or delivery jobs. One of the last ideas to come up was beekeeping. To everyone’s delight, beekeeping turned out to be just the right niche for the community. Daphne Williams, Chief Growth Officer of Sweet Beginnings, explained how Barber got the idea off the ground and launched a successful business. “She’s a masterful storyteller, and she always shares this story about how there are parallels between people who have been previously incarcerated and bees in that people are afraid of both—they’re afraid of getting stung. She wanted to take the sting out of the stigma.” Since its creation, Sweet Beginnings has been an inclusive and healing workplace providing undeniable benefits to the community.

Sweet Beginnings’ model leads to reduced inequality with the creation of equitable hiring practices, community engagement, and sustainable economic growth. The North Lawndale community was hit hard when manufacturing jobs left the area. With the loss of accessible employment, the neighborhood saw an increase in poverty and crime. Sweet Beginnings was conceived in response to these conditions. Instead of seeing North Lawndale as a place that was deficient, NLEN and Brenda Palms Barber recognized the talent and resourcefulness of the community and worked to strike down barriers so that everyone could succeed. Much like a bee might fly to an empty field and nurture and cross-pollinate beautiful flowers, Sweet Beginnings finds individuals and helps them to grow, uplifting the whole populace.

Perhaps the greatest asset to Sweet Beginnings’ business is the local nature of its production and distribution. With 5 apiaries in Chicago and another opening at the Worker Bee Café, the company manages to keep production and transport costs low, in large part due to the proximity of their operations. Keeping business local also supports the economies within Chicago’s neighborhoods, helping various communities thrive. Money spent at Sweet Beginnings is filtered back into the community by way of job creation and innovation. Sweet Beginnings’ non-discriminatory hiring practices, along with their development across Chicagoland, is a boon for the local economy writ large.

Since the beginning of operations, Sweet Beginnings has seen a recidivism rate of less than 10 percent for its workers. Compare that to the national average of 68 percent recidivism within 3 years for state prisoners and it is clear to see that Sweet Beginnings’ impact has far-reaching implications. Another innovative strategy practiced by the enterprise is that individual differences are prized as a strength. Supervisors get to know each employee as an individual and then employees are matched to the role that allows the most success. Daphne Williams describes this method as “growing people”. She continued, “I’m really struck by how people uplift each other. That’s the thing that is really heartwarming, it hits you deep. They (the employees) become a network for each other.”

Sweet Beginnings is providing a social benefit to its workers as well as an environmental benefit to the bee population. In recent years, honeybee populations have been reduced by Colony Collapse Disorder (CCD). While CCD does not have one specific cause, insecticides, mites, and habitat destruction are all potential contributing factors. The population decline of honeybees poses a threat to all of us, because, as the USDA reports, “bees pollinate 80 percent of flowering plants and about 75 percent of the nuts, fruits, and vegetables Americans eat.” Without bees to pollinate them, a significant portion of crops would struggle to grow. While urban beekeeping is not a solution to CCD, bees in the city are sometimes healthier than those in more rural areas. The reason is simple – farmers often grow monocultures, or only one kind of crop at a time. Bees, like humans, are healthiest when eating a varied diet and bees have trouble finding variety in rural areas with acres and acres of only corn or soy plants. Urban farms and gardens provide much greater nutritional variation, contributing to a healthier honeybee population overall. Sweet Beginnings not only provides bees with healthy homes, but they also advocate for bees and educate people about the important ecological role they play. Interested individuals can even learn what flowers to plant in their gardens to most benefit the bee population at blog.beelovebuzz.com.

Sweet Beginnings is a social enterprise and wholly-owned subsidiary of the North Lawndale Employment Network that produces and sells local raw honey and honey-infused skincare products which are sold under the name beelove. Individuals who have previously been incarcerated work for Sweet Beginnings as beekeepers and makers of beelove products. The beelove natural honey and skincare line are available for purchase both online at beelovebuzz.com and at locations throughout the Chicagoland area. By hiring citizens from the local neighborhood without discriminating based on prior records, Sweet Beginnings has created a supportive community which brings economic and social benefits to the entire region.