Tackling Poverty One Meal at a Time

CFINE is an organization driven by the needs and aspirations of the people in the North East of Scotland. At the core of the organization there exists a commitment to the local community, and a belief in social equality. This way of working drives constant innovation and enables CFINE to deliver projects different from many other social enterprises. The organization continually adapts and develops programs and services to meet the changing needs of the community. They began with the aim of reducing food poverty and hunger, and have grown to offer a wide range of support services. Each support service addresses a different social issue and the organization believes all of these issues are connected. CFINEs CEO Dave Simmers believes “this is what makes the organization different from many other social enterprises across the country,” there is no limit to the number of issues they aim to tackle.

In the beginning CFINE set out to improved health and reduce hunger through its network of food co-ops. Now the organization addresses a wide range of social issue through its educational programs such as a community training kitchen and workshop called Cook at the ‘Nook, which offers healthy-minded cooking classes. There are experts on site to offer financial advice on issues like debt and budgeting. The ‘Roots and Shoots’ project supports ex- offenders through, letting them gain work experience. CFINE is also a member of the Syrian Refugees Action Groups in Aberdeen and Aberdeenshire. Finally, new for 2017 is ‘Tuk In’, an innovative development using an electric tuk tuk to promote healthy eating and reduce food waste.

In addition to the innovative projects, CFINE has built relationships with several support organizations in the region. This network enables CFINE to give and receive substantial support, significant retailers and their supply chains provide vast quantities of food that enable the organization to deliver its FareScheme.

In the beginning CFINE innovated to improved health and reduce hunger, from its network of food co-ops. Now the organization addresses a wide range of social issue through its educational programs such as; A Community Training Kitchen and Workshop called Cook at the ‘Nook, which offers healthy eating cookery classes. Furthermore, there are experts on site to offer financial advice such as debt and budgeting information. The ‘Roots and Shoots’ project supports ex-offenders by providing them the opportunity for experience. CFINE is also a member of the Syrian Refugees Action Groups in Aberdeen and Aberdeenshire. Finally, new for 2017 is ‘Tuk In’, an innovative development using an electric tuk tuk to promote healthy eating and reduce food waste.

In addition to these innovative projects, CFINE has developed relationships with several support organizations in the region. This network enables CFINE to give and receive substantial support. Major retailers and their supply chains provide vast quantities of food that enable CFINE to deliver its FareScheme. 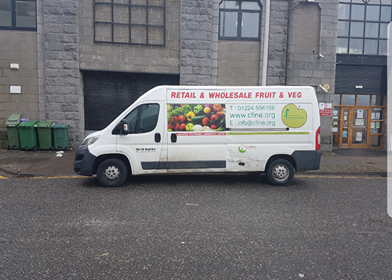 Each job role that Dave has undertaken throughout his career always revolved around tackling poverty. His first job was a community worker situated in the poorest community in Aberdeen. In this role, Dave provided a welfare rights service from 1976 - 83. He mentions that he feels “very passionately about inequalities in our society which have grown to proportions that are unhealthy and insecure.” This drive in tackling poverty also stems from Dave’s political ideology, as he mentions changes in the welfare benefits system in the early 1980s that he thought were “horrible and awful.” This passion has not subsided as he believes that those times in the 1980s do not compare to the severity that poverty levels have now reached. He expressed his disbelief that over the past decades, governments have widened the gap the rich and poor more than ever before, the opposite of "Reducing Inequalities." Dave went on to mention that “a more equal society is a healthier and more secure society.”

The overall impact of CFINE’s innovation is that it greatly benefits disadvantaged, vulnerable, and low income individuals, families and communities. Everything the organization does connects back to tackling poverty. For instance, one of CFINE’s core activities is providing community food outlets, with 70 outlets across the Grampian area which includes Aberdeen, Aberdeenshire and Moray. These outlets help bring in affordable produce and make it accessible for disadvantaged communities, which relates to the SDG 2. CFINE has a phenomenal amount of people coming in to their food bank who are in the most terrible circumstances; CFINE has provided over 10,000 food parcels in 2017, anticipates over 15,000 in 2018. A daily record was realized recently of 111 parcels in one day.

Another important core activity for CFINE is providing training and support for its volunteers, the majority of whom are from disadvantaged or vulnerable backgrounds, and sometimes have few or no family or friends, or no social network at all. Over the course of a year the organization will recruit around 250 volunteers who are described as the ‘backbone’ of the company. The support and training provided by CFINE has many benefits; it provides the volunteers with self-esteem, a sense of power, purpose, and confidence and allows them to gain new skills and a social network. The support and training has provided a qualitative change to a human beings’ lives and the outcome has been life changing for some of the volunteers.

CFINE has built the organization around community development which meets people’s needs, priority issues and aspirations.

In 2017-18, the CFINE’s turnover was around £1.2 million, and in this year a useful development has been realized with c £40,000 which has come from donations and fundraising. The organization operates with a complex array of funding including grants, service level agreements, trading income, donations and fundraising. CFINE had done a great deal of business with oil companies, which purchased its fruit and vegetables. In November 2014, at the beginning of the oil downturn, one by one, c 70 oil companies stopped purchasing produce which resulted in a loss of £150,000 income. However, the organization managed to navigate through that hard time and coterminously, managed to secure significant income through The Scottish Government and Aberdeen City Council, these grants secured as a result of exceptional social outcomes.

Furthermore, one of CFINE’s aims is to create employment, which also relates to the SDG 8. The organization currently has 29 employees, 22 of whom were recruited from their priority communities e.g. they have a disability, come from a disadvantaged background, or have an alcohol or drug addiction. In addition to this, at any point in time, CFINE have about 130-150 volunteers and over the course of a year have around 250 in and out. Also, occasionally corporations will come to CFINE for team building days; a group of employees will help out for a day.

CFINE has several initiatives which aid people who are in the most deprived circumstances. The ‘Cook at the ‘Nook’ initiative promotes "Zero Hunger" and "Good Health and Wellbeing" by providing free basic cooking courses or advanced cooking courses for a fee. The profits are reinvested towards sustaining a free-of-charge facility for low-income individuals. CFINE has another initiative called ‘Roots and Shoots,’ which supports ex-offenders by improving their employability through work experience. Also, a share of CFINE volunteers have or had learning difficulties or mental health issues. In an interview, Dave gave an example of two women who were once in the most difficult, impoverished situations. But after they became CFINE volunteers, he saw them undergo “a complete transformation in terms of confidence, skills, sociability and their ability to engage with people” which makes his job “worthwhile.” 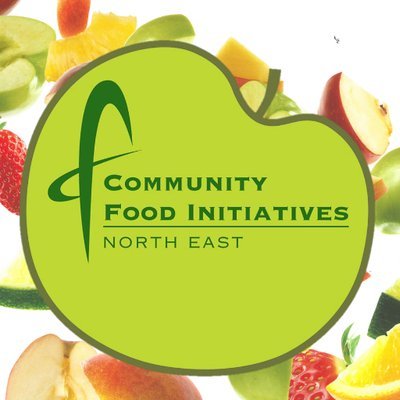 Established in 1997, Community Foods Initiative North East (CFINE) was formed with the aim of alleviating food poverty across the North East of Scotland. The organization began when seven food cooperatives joined forces to work together to tackle the issue of food poverty in the region. Initially, CFINE tackled hunger issues by helping food coops work together and supporting food banks by collecting supermarket waste and redistributing to those in need.

Since then the organization has become the lead partner in the 67 partners-strong Food Poverty Action Aberdeen (FPAA). The CFINE team has expanded to 30 employees, 22 of the 30 have come from difficult backgrounds and this year there will be over 250 volunteers and several work placements within the organization. CFINE enables the continual development of those who work the organization, offering advice and support to those who pass through its doors, including several of the volunteers who are adults with learning disabilities.

At the core of the organization is the commitment to promoting fruit and vegetable consumption, on an affordable basis to its low income customers, as well and on a commercial basis to the business community, with all profits from the later invested in the charitable ventures.

One significant charitable initiative is FareShare which receives produce form the food industry, 400 tonnes over the last year diverted from landfill. For every 1 tonne of food saved by Fare Share, over 4 tonnes of carbon emissions are prevented. This year FareShare is expected to distribute over 500 tonnes of produce.

The organization is led by a passionate team. CEO, Dave Simmers strongly believes the issues faced by many across the North East should not exist in the 21st century, yet according to Dave, in his time the social problems across the region have steadily worsened.