Globally around 1.3 billion tons of food is wasted annually, representing around one-third of the food that is produced. The hospitality industry accounts for approximately 15% of this food waste worldwide. Orbisk developed a food waste management system for the hospitality sector that tracks and predicts food waste using innovative technology and Artificial Intelligence (AI). This smart food-waste monitor, with the ability to tell exactly what, when, and how much is thrown away, provides actionable insights and helps the hospitality service industry prevent food from being wasted, and aids in preventing the associated inherent CO2 emissions, energy, and water spillage.

The Orbisk plug-and-play food waste management system consists of a camera located above a waste bin which is placed on a weighing scale. The camera automatically detects and identifies the food that is thrown away. Using Artificial Intelligence and image recognition software in combination with the known weight of what is thrown away, the software registers all waste automatically on an ingredient level. The software, using Artificial Intelligence (AI) algorithms, generates customizable reports providing insights into food losses. Allowing users to identify exactly what is being wasted and how they can implement changes for preventing food waste through stocking and planning, adjusting portion sizes, ultimately increasing overall efficiency within the kitchen. The system is provided by Orbisk as a service, whereby the hardware and software are provided on a subscription basis and the users are supported by Orbisk in the monitoring of their food waste streams, and identification and implementation of improvements. 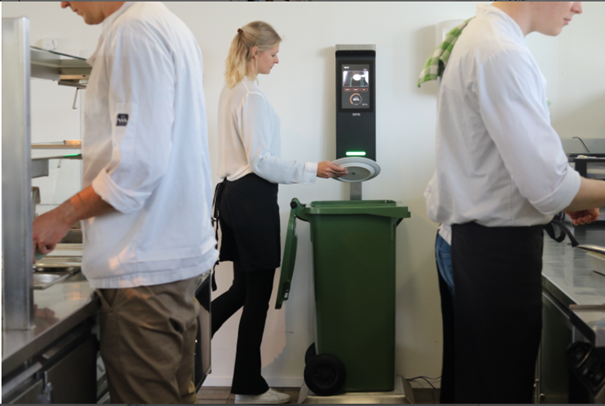 Founder and CEO, Olaf van de Veen always wanted to be an entrepreneur. Getting familiarized with the sustainability topic he realized how good it fitted with his personality in terms of everything that needed to be done differently. He started consuming everything he could find on the sustainability topic, “I felt this is going to be a problem for at least the rest of my career, if not the rest of my life. Sustainability is the biggest puzzle that we need to solve as a society, and I wanted to be a part of that” he said. Following his growing interest, Olaf started going to conventions and conferences where he noticed people were telling each other things like “the government needs to do ‘this and that’, and restaurants that ‘do well’ need to get a sticker or something”. From this experience he stated, "I got the creeps all over because I thought: This is not solving the problem, this is just pointing fingers”. With that frustration in mind, and being a problem solver, his mission was started.

Being still employed with one of The Netherlands’ biggest grocery retailers, Olaf started writing down ideas and dreams during brainstorm sessions he held on Monday evenings with one of his colleagues. On their motivation and vision, Olaf states "We like to solve problems through beyond state of the art and cutting-edge technology, which would be Artificial Intelligence”. At the end of 2017, together with a former colleague, he started conceptualizing the idea by working part-time on this project. Around the same time, Olaf decided for himself “before February 2018 something will have to be changed”, indicating a self-imposed deadline to make a change in his life. During this time Olaf teamed up with one of his childhood friends, Bart van Arnhem (CO-Founder and Software Developer), when in January 2018 they started talking to potential clients to validate if what they considered to be a problem, was in fact a problem that was also perceived as such by their potential customers. The mission that drove the innovation was born from the belief that it should be as easy as possible to use, “that there is really no reason not to use it” as said by Olaf.

The first client talks were held in February 2018 and the first prototype was operational in April 2018. By September 2018, founders Bart and Olaf initially reduced their time working for their employer to 50%, allowing them to focus on developing the company before leaving their jobs behind them and focussing full-time on Orbisk. Looking back, Olaf described this period as “the true bootstrapping scenario of making something work, working 100-hour weeks out of pure passion, for the belief what was needed doing was done. That was what really drove us". Representative for this period Olaf further noted, “You can’t do everything at once, so you have to accept some things are imperfect, and then you just need to address what hurts most in the first couple of years, either for yourself or for your client". It was in May 2019 that Richard Beks joined Orbisk as the third Co-Founder in the role of CCO. Six months later they would grow their organization to 20 employees.

On his personal mission when starting Orbisk, Olaf stated "I wanted to be able to compensate all of the negative impacts I would ever be able to make in my life; I wanted to compensate my own impact on this planet”. To monitor their performance and motivate their team members, Orbisk’s KPIs are more than just the number of installations they place, it is the kilos of waste that is prevented, what is their true KPI. Through these metrics, Olaf states, “most of our team members have the intrinsic drive for solving the problem that we are addressing, and even if they don’t have it from the start, they will get it from the atmosphere and vibe at the company”. In the future the company also wants to enter the healthcare industry where they will focus not only on food waste but also on food consumption, further utilizing the intrinsic drive for technology and tackling societal challenges that all the team members within Orbisk have.

The Orbisk’s waste monitor helps kitchens of restaurants, hotels, and cafes in reducing food waste by 50% on average. The AI technology in the camera of the installed food waste monitor recognizes the food item and the weighing scale measures the weight of the wasted food items. The system generates online waste reports for its customers to analyze the pattern of food waste and plan their purchases accordingly. It is a beneficial solution that aims to help the world to achieve the SDG goal of halving food waste at retail and consumer levels by 2030. There is an average of 10.000 kg of waste produced annually by every restaurant globally. In the hospitality industry alone the annual food waste amounts to 150 million kilos. The monetary value of Dutch hospitality waste is estimated to be 825 million euros annually where, on a global level, one-third of all food produced is wasted. Now, with the help of Orbisk’s food waste monitor restaurants can easily save on average 5% per month on their purchasing costs by planning to buy the raw materials in reduced quantities. By doing so they can reduce not only the food wastage but also labor input, and hence can increase their profit margin whilst in return contribute to the reduction of greenhouse gas emissions and reduced energy and water usage.

Reflecting on his mission to compensate his personal negative impact made on the planet, Olaf notes “on hindsight, it was far from ambitious, looking back now, today, a couple of years further, the company already saved around 5 years of eating for every single one of our employees”. Looking forward it is estimated that, when Orbisk is on a full operating scale, they would be compensating on average around 100 - 200 years of food waste per person per year working at Orbisk. Extrapolated to have saved about 200 million kg of food accumulatively four years from now, which is definitely compensating for his own personal negative impact.

The food waste monitor system is a profitable solution supporting financial efficiency in the hospitality industry. When pitching to for instance hotels, Olaf likes to make the comparison with the well-known ‘towel washing program’ most hotels adopt as part of their CSR activities. On this towel washing program, where, if you keep the towels from the floor, they won’t be washed, and thus saving water, he says “it’s not a bad thing, let’s put that first. But it is so small, for the amount of food an average hotel wastes, they could wash around 2.5 million towels a year, equivalent to the daily towel washes of a (fictional) hotel of 3.500 rooms”. Indicating the negligible impact such a program has compared to preventing food from being wasted.

The investment for a food waste monitoring system is higher when compared to the towel washing initiative as given, but the impact is also considerably higher. Averaged-sized restaurants could save up to 5.000 kg of food not being wasted, adding up to a €20.000, – €40.000, - saving per annum. Besides the financial benefit and ecological incentive to reduce food waste, the product can also be used as a marketing tool in the communication of their CSR activities with the customers and staff of the hospitality industry.

The 10.000 kg of food an average-sized restaurant wastes in a year corresponds to 45.000 kg of CO2 and 70 million liters of water. When food waste goes to landfills it rots and produces methane, which is 21 times more potent than CO2 as a greenhouse gas. Orbisk’s waste monitor helps in reducing food waste which in turn reduces the food production need, and related energy and water consumption as well as greenhouse gas emission.

Poverty and food wastage across the globe are the main reasons for hunger. There is enough food produced worldwide, the challenge is to waste less food and feed more people with the same food. The Orbisk’s waste monitor encourages responsible purchasing and consumption and helps humanity to reduce food waste. With this, eventually contributing to solving the hunger problem in the world. Orbisk’s target is to save 100 million kilos of food waste per year by 2025. By then they would have saved 250 million kilos of food. As stated by the CEO and founder of Orbisk "There is more than enough food being produced in the world, the problem is with the distribution of it and the waste of food”. 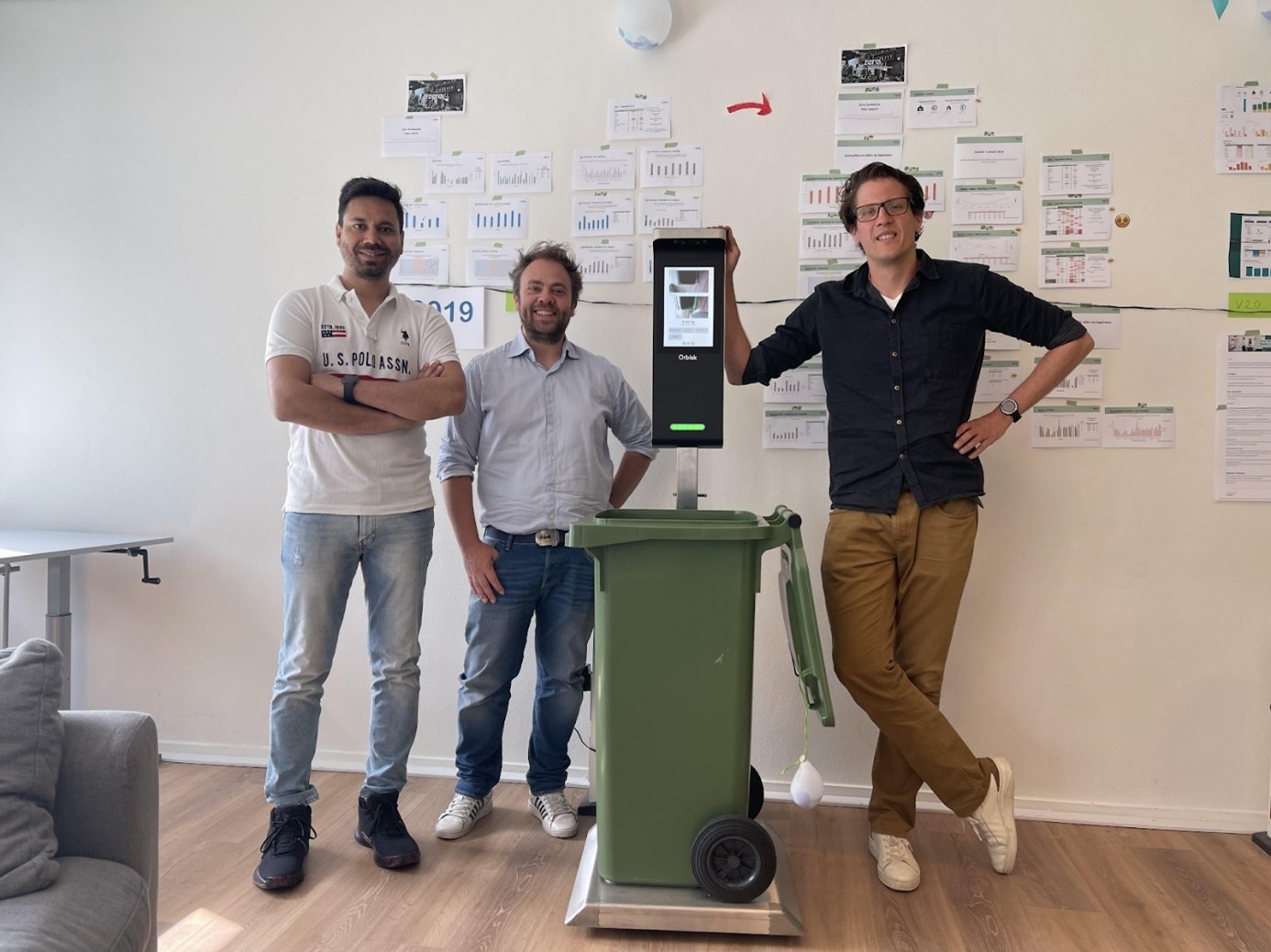 Globally around 1.3 billion tons of food is wasted annually, representing around one-third of the food that is produced. The hospitality industry accounts for approximately 15% of this food waste worldwide. Orbisk developed a food waste management system for the hospitality sector that tracks and predicts food waste using innovative technology and Artificial Intelligence (AI). This smart food-waste monitor, with the ability to tell exactly what, when, and how much is thrown away, provides actionable insights and helps the hospitality service industry prevent food from being wasted, and aids in preventing the associated inherent CO2 emissions, energy, and water spillage.