“On a bold mission to grow the best plants possible for the betterment of humanity”, (AeroFarms, 2021) AeroFarms paves the way for a more sustainable future of agriculture. Based in Newark, New Jersey, the American company encounters some of the most pressing issues which are commonly associated with traditional field farming. Growing plants in vertical indoor towers at the use of customized LED lights, AeroFarms manages to provide freshly grown products all year-round, while at the same time making an effort on not overusing natural resources or exploiting the environment. Because after all this is what the story behind sustainable salads is about.

AeroFarms’ patented cultivation method consists of the use of customized LED lighting, which allows the provision of a tailored growing environment responding to the specific needs of each type of plant. Advanced sensing technologies, data science, as well as Artificial Intelligence aid to regulate and control the natural growing process. Each plant requires a specific spectrum, intensity, and frequency of light to facilitate the conditions for photosynthesis, which can be optimized and ensured by applying the corresponding light algorithms. “With 14 years of expertise in the relatively new industry, we have created an expert team of plant scientists, engineers, innovators and farmers harnessing over a decade of company knowledge to grow the best plants possible for the betterment of humanity”, Marc Oshima, Chief Marketing Officer and Co-Founder of AeroFarms, notes.

Jumping on the train of vertical indoor farming, which was first applied in the agricultural industry in the 1950s (cfr. Gupta & Ganapuram, 2019), AeroFarms strived to further innovate and enrich the already existing concept by establishing its unique proprietary LED lighting.

AeroFarms’ entrepreneurial spirit combined with the company’s extensive knowhow led to the implementation of an energy efficient approach, which at the same time boosts productivity and enhances the cultivation process as a whole. 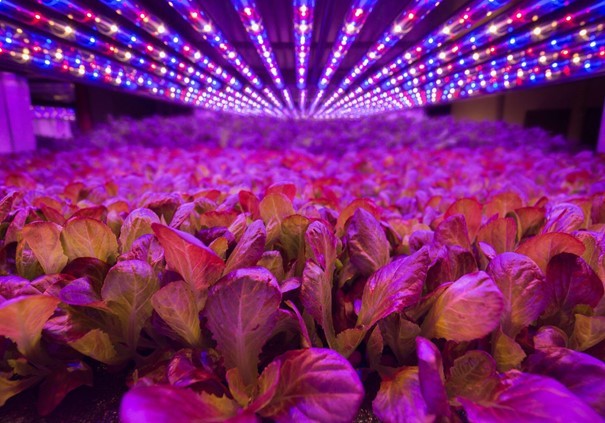 As David Rosenberg, CEO and Co-Founder of AeroFarms, let us know, he was back then concerned about the production practice of agricultural goods and what this meant for nature and communities.

Daring a look a few decades further, at that point of time, Rosenberg started to worry about the likely degradation of the current state – also having in mind the responsibility towards future generations. Agriculture is one of the most water-depending and thus water-consuming industries. With about seventy percent of global water resources being needed in the production process and considering the fact that seventy percent of freshwater contamination can be traced back to agricultural practice, farming is a highly resource-consuming activity with major impacts on nature.

“I wanted to do something about the very real possibility that my children would not be able to take clean water for granted, as most of us do today”, Rosenberg states about his initial entrepreneurial motivation. “To accomplish this, I learned that salad is a good place to start.”

Nowadays, about 95% of packaged salad in the United States is cultivated in the South-Western area of the country, namely in Arizona or California. This makes one think of the overexploiting of the arable land in these regions and the long journey salad and other greens must take to finally reach the end consumer in other parts of America. Consequently, “driven by a goal to create a company that could change the world and how to interact with our food systems, I partnered with Dr. Ed Harwood and Marc Oshima to create AeroFarms as we know it today”, Rosenberg further explains.

Vertical indoor farming offered the chance to preserve nature and its resources as well as the opportunity to grow plants close to urban, metropolitan areas.

Dr. Edward Harwood, former professor at Cornell University – which is one of the world’s best universities in terms of agriculture sciences research – already developed the company’s unique growing technology in 2004. Seven years later, Rosenberg – as he tells us – started collaborating with Harwood and Oshima “to scale AeroFarms technology and fundamentally transform the food system in the process”.

Since AeroFarms is aware of its responsibility towards the environment and society, the company’s business model is based on twelve of the seventeen Sustainable Development Goals (SDG), which have been put in place in the United Nations Agenda 2030. Besides combating poverty, AeroFarms particularly addresses the goal of ending hunger in the world. Integral to its operating activity is the production of agricultural products which can be achieved in a much more space-saving way thanks to vertical indoor towers. This finally leads to an annual productivity per square foot that is 390 times higher when compared with traditional field farming.

AeroFarms promotes good health and well-being by offering a wide portfolio of high-quality food and plants, minimizing at the same time the need for water. The pollution of nature and seas, especially due to contaminated water, can be decreased since AeroFarms’ cultivation approach is built on a zero pesticides philosophy, which is also a progress in terms of climate action. It does neither apply traditional, environmentally harmful harvesting methods nor does it overexploit the existing arable land or has to create new one. The company also dedicates itself to encouraging education, gender equality, decent work and economic growth. Marc Oshima communicates which efforts AeroFarms makes to achieve this: “We support our communities in every way we can – we hire locally, pay fair wages, and work with schools to connect kids to what’s on their plate”.

Growing plants vertically in indoor towers, including the usage of customized LED lighting, in fact represents a business innovation which revolutionizes the industry and traditional infrastructural patterns, and which also contributes to the development of sustainable cities and communities.

AeroFarms benefits from the possibility to grow over 550 different varieties of plants all year long, independently from external weather and growing conditions. Especially compared to traditional field farming this represents a competitive advantage in the agricultural industry. Thanks to modern technologies, which find application in the company’s patented cultivation method, optimal growing conditions can be artificially created. “Our unique horticulture luminaire and LED technology allows us to optimize the size, shape, texture, color, flavor, and nutrition of our plants with razor-sharp precision and increased productivity”, says Emily Gee, Senior Marketing Manager at AeroFarms.

AeroFarms’ business model represents an economically viable activity with strong growth potential. Considering the fact that – as Gee tells us – ”in 2050 (…) close to 70% of the world’s population will be living in megacities”, direct food supply close to urban centers is likely to gain more and more importance. Gee further adds that “the UN estimates we will need up to 50% more food to feed this growing population”. Thanks to vertical indoor farming, more greens can be grown while less space is needed, leading to an overall increased productivity and efficiency. Also, the requirement of natural resources, or to be more precise, the need of water, can be reduced by up to 95% compared to conventional field farming. Referring to the traditional agricultural practice, Rosenberg clarifies that “the quantity of water required to sustain these farms, not to mention the intense water requirements of the controversial ‘triple washing’ practice, has largely contributed to the dire state of water in California”.

Apart from the mentioned resource savings, advanced technologies allow AeroFarms to better control the growing process and therefore to guarantee a high quality of the products. Not using any pesticides and being able to trace back the greens from seed to package adds to a distinct level of food safety. End consumers also profit from AeroFarms’ approach to grow and distribute locally, thus avoiding long transport routes. Gee illustrates that “consumers can feel confident knowing plants grown in our indoor vertical farm are grown with the least environmental impact and with freshness and flavor as a priority”.

Apart from the economic benefits of AeroFarms’ innovative cultivation method, the company also makes a positive contribution to the environment and society. Asking about their Unique Selling Proposition (USP), Oshima proudly emphasizes that “being the only indoor vertical farm that is B Corp Certified” is what sets AeroFarms apart from other market competitors. “We take our commitment to our community, customers and team members as the priority”, he further stresses. Responsibly practicing its business power also means sharing year-long agricultural expertise within the context of the company’s Community Farms Program. Furthermore, AeroFarms‘ recruitment policy is based on the principle of offering the same opportunities to everyone and therefore contributing to greater equality. Since 2016 the company also hires formerly incarcerated for which in 2020 it has been honored by the NJ Reentry Corporation according to AeroFarms’ website.

Being an innovator and trailblazer for modern agricultural practice, AeroFarms addresses many of the most urgent environmental issues that are commonly associated with traditional field farming. The negative impact on nature can be significantly minimized through the protection of natural resources, counteracting the development of arable land loss and through the company’s zero pesticides policy.

“Proud to put purpose first”, Oshima as well as the rest of the AeroFarms team work on the shared “mission to grow the best plants possible for the betterment of humanity” (AeroFarms, 2021). Together, day by day, they dedicate their effort to offering sustainable salads as the combined product of entrepreneurial engagement and the wholehearted willingness to transform the world to a better one.

AeroFarms. (2021). We are on a bold mission to grow the best plants possible for the betterment of humanity. About AeroFarms. https://www.aerofarms.com/about-us/

“On a bold mission to grow the best plants possible for the betterment of humanity”, (AeroFarms, 2021) AeroFarms paves the way for a more sustainable future of agriculture. Based in Newark, New Jersey, the American company encounters some of the most pressing issues which are commonly associated with traditional field farming. Growing plants in vertical indoor towers at the use of customized LED lights, AeroFarms manages to provide freshly grown products all year-round, while at the same time making an effort on not overusing natural resources or exploiting the environment. Because after all this is what the story behind sustainable salads is about.