Rowe Farms uses environmentally friendly products, using sustainable practices to keeping carbon and water in the ground, as well as keeping their customers healthy and happy. They continue to promote sustainable farming and animal welfare, as they support the community.

Rowe Farms has created an innovation that is supporting many of the UN SDGs and is continually working towards making this world a better, more sustainable place. The first goal Rowe Farms targets is good health and well-being.

They raise their animals without the use of sub-therapeutic antibiotics and unnatural hormones. In addition to supplying organic and GMO free products. This creates a great peace of mind for customers, knowing that they are feeding themselves and their families with high quality products that are good for them too.

The next goal Rowe farms targets is climate action. Through their sustainable initiatives such as supporting local production, it helps keep the world cleaner with less trucking and decreased fuel consumption. In addition, bringing carbon back into the soil which usually takes around 40 years to do.

The last main goal Rowe Farms targets is life on land. They have very high values when it comes to how they raise their animals. They treat them with respect and give them a humane and low-stress environment to live in. They have constant access to water and food and are fed a strictly vegetarian diet. Rowe Farms raises grass-fed cattle which ultimately makes them healthier in comparison to ones that are grain and corn-fed. 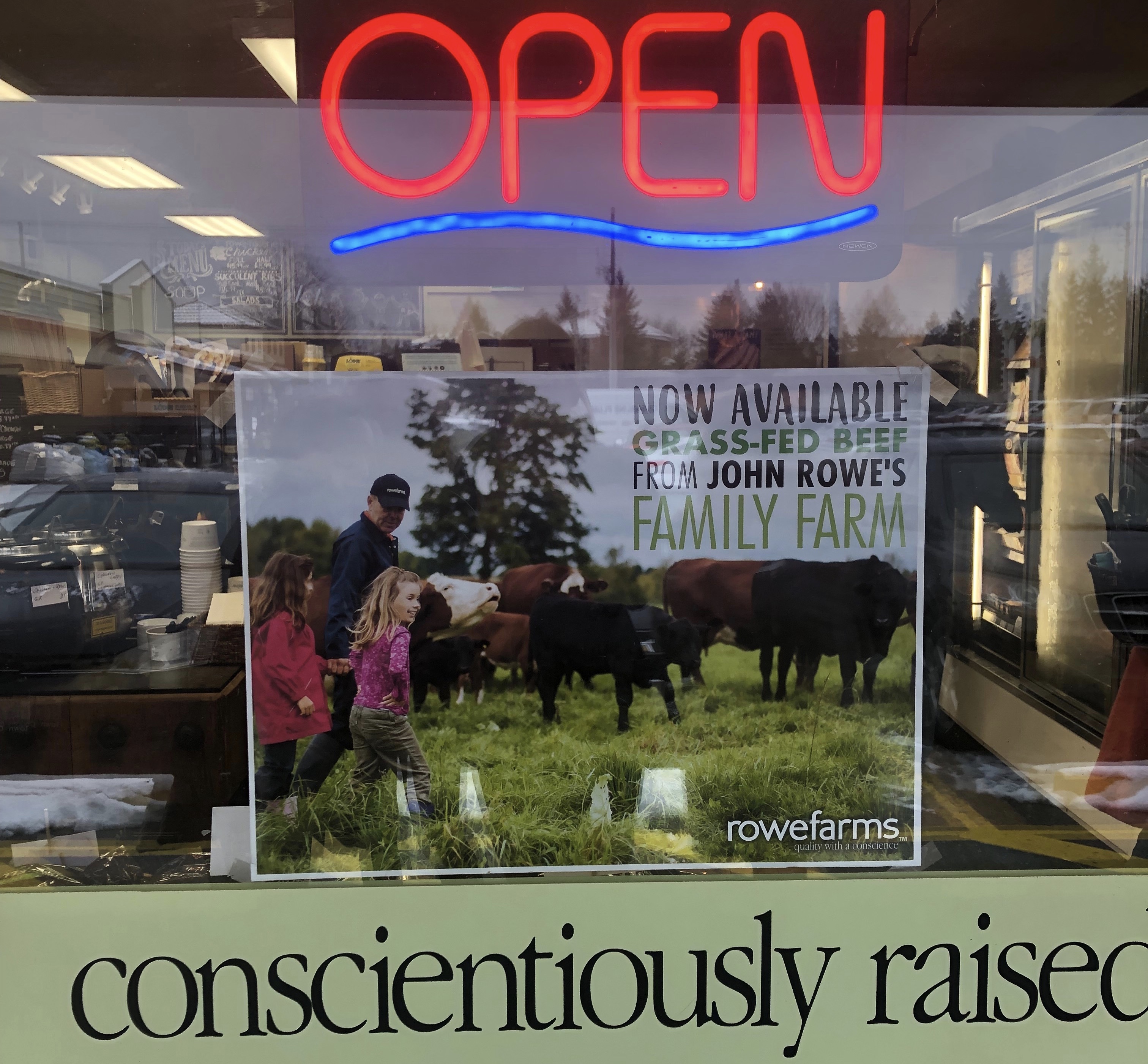 When Founder John Rowe first started the company in 1972, he was focused on keeping his family healthy and happy. As he continued to grow his business, he realized the big impact that farming could have on the environment. John first started with feeding his cows corn, but once John learned about grass fed beef he knew he would never go back to corn fed. John stated “[beef is] only bad if it is farmed incorrectly”. So he was inspired to farm the correct way were he could make a positive impact on the environment.

He realized he “didn’t want to bioaccumulate” he wants to focus or biodiversity, “replenish[ing] nutrients” and the health of his plants and animals. He knows it is hard but John is determined to maintain his soil. He is lowering his use of monoculture crops, and increasing the carbon in his farms ground. His mindset is “We can't be socially responsible without being environmental.” He is cutting down his use of carbon and oil. Using the tractor less, and lowering his transportation are only a few ways Rowe Farms continues to lead the agricultural industry with sustainable practices.

He continues to push an environmentally sound farming model so other farms can join the movement of local sustainable farming. John stated “If we used sustainable practices we would have much more land”. We don’t need more food, we just need better food. John and Rowe Farms know that sustainable farming could cause economic problems and he said “I don’t want hardship, but want people to live and farm differently.” There will be costs no matter what, it's your choice which one you choose to endure, economic or environmental. John continues to inspire not only his staff and team but the entire community of Guelph with his environmental modernization.

The innovation behind Rowe Farms is in the way they produce their products. For example, they feed their cattle with grass. We were informed of the natural benefits it had on the cows as well as on the land. By creating grass crops it maintains the top layer of the earth, preventing erosion which helps to preserve the carbon levels within the ground. As a result of the grass, runoff from the farm is retained through the dense root systems of the plants. John Rowe has goals for more biodiversity within the industry in order to use no poisons or antibiotics, similar to his farm. Rowe Farms follows a model that doesn’t damage but actually improves air quality and lowers the levels of Greenhouse gasses. Supporting locally grown, sustainable agriculture is not only more beneficial for the environment but also for society.

The agriculture industry is overworked and still growing each day. Industrial farming follows loose environmental regulations and does not truly work towards sustaining the planet. Practices revolving around monoculture and transportation of products demonstrate what we must change. As a company, Rowe Farms is able to promote positive agriculture and innovations towards the community. Actions made by them carve pathways for other sustainable farming companies. From the products on the shelves, in their stores, to the way they care for their animals, Rowe Farms is a leader within sustainability.

The uniqueness of the products sold holds great benefits towards the business. Each product has high quality and ethics behind them. Despite the success of Rowe Farms, revenue isn’t the goal. They aim to create flourishing communities that are self sustaining, through local farming and produce. As of what I saw, all employees within the store were happy and energetic. The company feels like a family with around 50-60 total employees for all store locations and the head office.

The innovation of Rowe Farms products in the way they are produced allows for the company to thrive. Despite this, John Rowe wishes there was more competition and hopes for businesses with the same aspirations to be successful. Having this goal truly reflects the company’s ethics and demonstrates their commitment to positive agriculture and sustainability as a whole.

Society highly benefits from the contributions of Rowe Farms. They have access to agricultural goods that are locally sourced by a trustworthy company that guarantees high quality, ethical and sustainably goods. Their commitment to the community and farming model is shown through their strict environmental and animal protocols. As stated on their website, each farm receives four annual Rowe Farms inspections, annual Rowe Farms audit, annual third party audit, farmer signed affidavits and a CFIA review. Their innovation is used as a way to educate society on the importance of their sustainable practices and its impacts on the world. Overall to societies benefit, they have access to healthy food supplied by local farmers in their community. 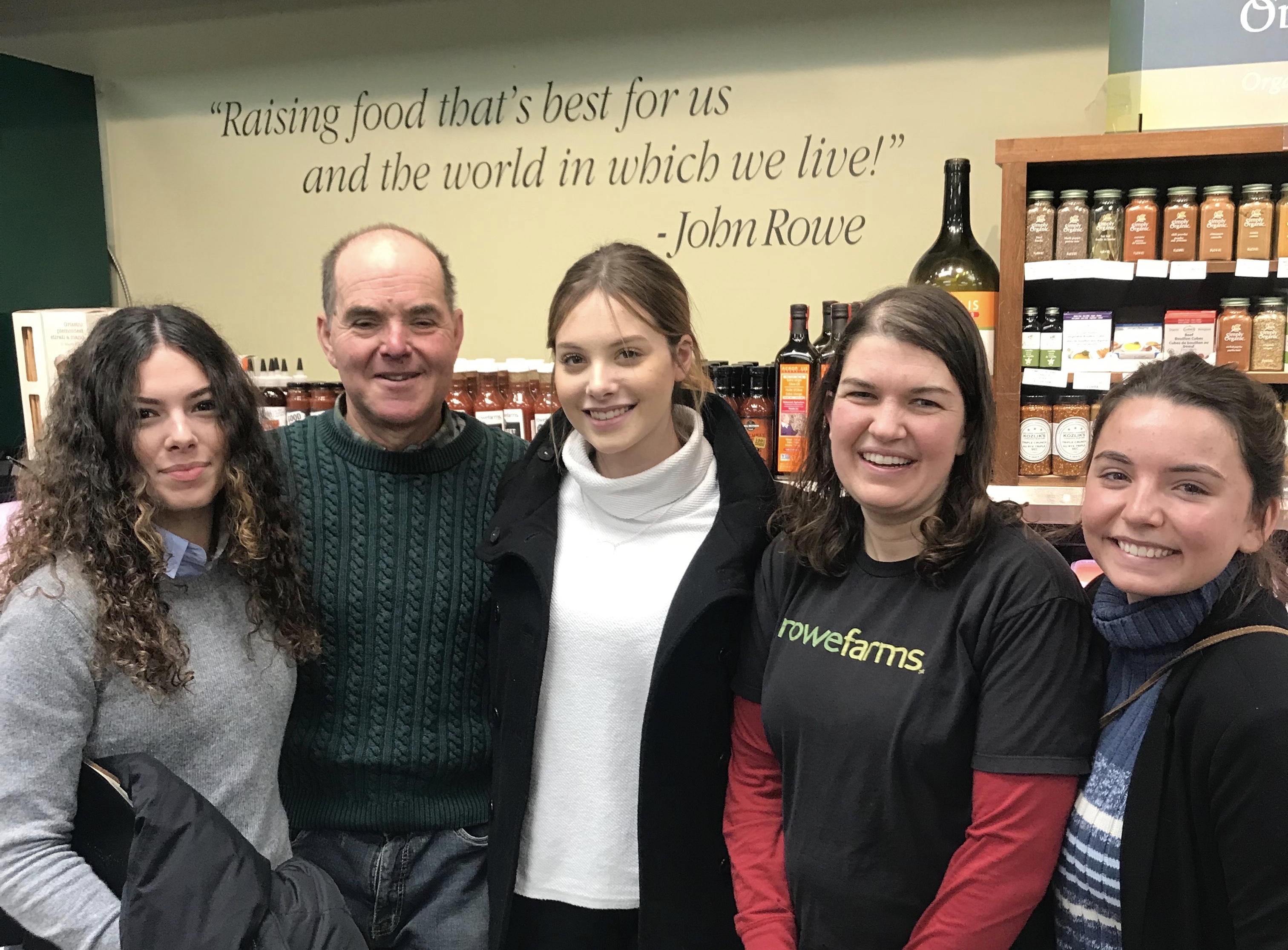 Rowe first started raising grass fed cattle on John’s Guelph, Ontario farm in 1972. The company continued to grow but not losing its original roots. Rowe Farms produces animals without the use of antibiotics, growth promoting hormones or animal by-products. Rowe Farms believes in a more balanced food system and is working with the environment, not against it.