Sustainability Rooted in the Past

Editorial Ecuador has implemented recycling mechanisms in order to avoid waste and take advantage of all the resources obtained from their raw materials. They reuse their waste and they cooperate with other agencies to deal with the remaining waste.

Times change and with those changes there are also significant changes in market demands and in market competition. It is not a surprise to see the decreasing demand for printing services as technology evolves. Nowadays everything is used via online, PDFs, Drive, Cloud, and so on. This presents a challenge for companies of "past industries" of paper and books.

That's one of the strongest statements of why we consider Editorial Ecuador F.B.T. Cia. Ltda. to be an innovative company, because they faced this problem of declining demands and the environmental issues all at once, with their new business model which contributes to responsible consumption and production.

Their business model consists of giving the customers the best experience possible regarding their printing demands and, at the same time, reducing contamination and recycling their printing wastes in order to decrease their environmental impact. Their aim is to be a sustainable and profitable printing company that mitigates climate change and contributes to life on land and life below the water by implementing reusing and recycling policies.

They receive income from the reuse of their printing wastes, which is an interesting fact, and why we think they are innovative! 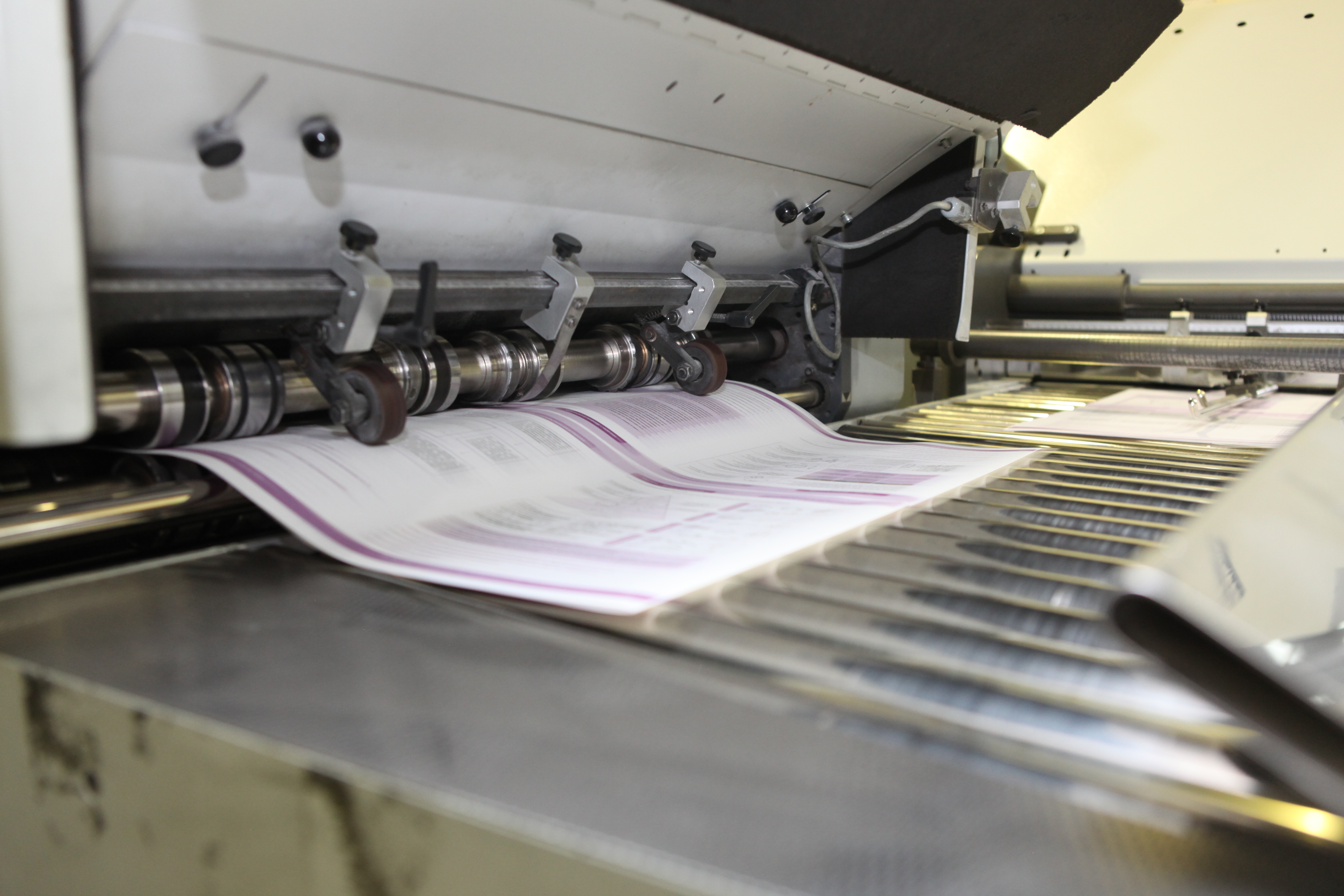 Editorial Ecuador F.B.T. Cia. Ltda. is a family company, founded by Fausto Bucheli in 1950 with one objective; provide the best textbooks to Ecuadorian students in order to have a better education and by that a better country. In the 1950s after the Second World War, the founder of the company went to Europe to see what industries were left; printing services being one of those. During the 1950s, Ecuador was facing an economic crisis. Fausto saw the necessity of bringing to Ecuador the best knowledge possible through the best textbooks, rather than continuing to use textbooks and teaching methods from the 19th century.

Currently, the second generation is leading the company and the third is step by step acquiring knowledge of the industry. It is important that the family owners keep innovating and considering the requirements that people have of businesses. With inspiration coming from the first generation and the founder of the company, Javier Bucheli, Editorial Ecuador’s CEO, looks for ways to maintain the business in the complicated and competitive market of the 21st century without letting go of the objective his dad set back in the 1950s. That is why with the help of his sons he started implementing new business lines that allow them to be at the forefront of the printing industry, which considers the requests of not only the customer but also from the planet.

FBT's CEO found that the company had been annually increasing their amount of waste. One day at the beach he passed a place called Inga-Ilalo, which is where all the debris from his printing company ended up. This moment was crucial for Bucheli who saw the tremendous amount of waste they were making and being discarded. He stopped his car immediately and realized that paper, iron, plastic, wood, and a lot of other materials where put in the same place, which made him ask what use could be made from these materials. The least he could do was to find ways to reuse and recycle all that debris. Javier returned to work with one vision: Give back to the planet what the planet has given to him.

Bucheli found that the printing sector in Quito produced approximately 45,000 TN of waste every year and with this data he looked for ways to reduce and reuse it. One of the main objectives of Editorial Ecuador is to be a sustainable company and to contribute to society not only with printing services but also with a carbon-neutral policy that contributes to the environment taking care of life on land considering that they use more than 30TN of wood that is directly taken forests. Editorial Ecuador has decreased their usage of wood dramatically by reusing this material. Nowadays FBT has implemented systems that help them accomplish this objective but also contribute to society by cooperating with the government and other partnerships to deal responsibly with debris. They also have the strategy and objective to deliver textbooks at lower prices to the most vulnerable families thus helping to improve the quality of life of Ecuadorians.

Furthermore, the company is working to improve the standards of living in the community through different initiatives.

The first F.B.T innovation was to produce their own machines; normally after some use printable plates become obsolete. Editorial Ecuador found a different type of iron that when it accomplishes its useful life could be melted to make another printable plate. Another important innovation comes from recycling on average 45TN of paper in a strategic alliance with the municipal government which has a recycling system for these kind of residues. The company receives a price per ton from the sale of the residue and the municipal government produces more paper which makes this cycle efficient and sustainable.

Wooden pallets are one of the most complicated remnants Editorial Ecuador has to deal with, since they are used to pack the material they receive and do not have a way to recycle them without damaging the environment. This was a huge issue for FBT. However one of Editorial Ecuador workers thought that it would be a good idea to reuse the wood for moving material.

Another important residue is plastic, since they receive tanks with the chemicals they use for textbook production that cannot be reused. However F.B.T has found a strategic alliance with recycling companies.

The mission of Editorial Ecuador is associated with the following United Nations Sustainability Goals (SGDs):

Despite the considerable amount that Editorial Ecuador produces from their printing service such as textbooks, packaging, flyers and other products related to the printing industry, the company also has an important social vision which is giving back what they receive from their communities by paying competitive salaries to their employees and also investing in the company in order to have the latest technology sustainable economic growth.

For example with the iron waste they generate they receive $1,5 per kilo; they generate 6000 KG per year. Another example is the $5 they get from the tanks. The paper waste which is divided in 3 different categories, white, mixed and paperboard. In 2019 they sold 11TN of white paper, 15TN of mixed paper and 7 TN of paperboard to the local government's residue plant for $5,420. In the case of tanks they receive $5 for each tank and they use approximately 5,000 tanks per year.

Editorial Ecuador F.B.T. Cia. Ltda. had a clearly defined mission from its moment of founding - to deliver to every person a quality product that meets their needs. While achieving their prime goal, they also brought to the Ecuadorian economy and society a huge impact and benefit giving them the knowledge to help the country grow and having better workers with more knowledge. Their short delivery time, since they are a family company they have the ability to manage things faster than others, their high-quality products and their amazing customer service makes it possible for society and education institutions texts from the best printing quality. That encourages young people to read, prepare and to study more, considering that they supply to public schools where normally people do not have access to books due to the cost.

This company has also created more job opportunities for the Ecuadorian community and established strong commercial alliances within the printing industry, redirecting the company's goal of this sector, towards a more efficient use of resources that benefit the environment and having Strategic alliances with the municipality of Quito for the paper waste they produce.

The business model of Editorial Ecuador has indirectly benefited more than 100 people, among them, a large number of recyclers that receive a monthly income for their services; this not only decreases poverty, but at the same time it reduces inequality.

On the other hand, the company sells and reuses printing iron plates that are usually thrown into the river and damaging the ocean's ecosystem. Editorial Ecuador has a yearly waste of 6000kg of iron plates which are reused.

Furthermore, the paper waste is also reduced through the recycling process. Editorial Ecuador records a waste amount of 33 tons of paper waste that are recycled and reused. This reduced tree cutting, the destruction of ecosystems, and maintains the habitat. This helps the emerging species of flora and fauna to be preserved, to make a greener world.

Editorial Ecuador F.B.T. Cia. Ltda. is a printing service company established in Quito, Ecuador with more than 70 years of experience in the market offering a variety of printing services to the private and public sectors. With these experiences, Editorial Ecuador found the necessity of upgrading and innovating their business model due to the impact of new technologies and the imminent increase of the usage of tablets and laptops instead of paper, which was F.B.T.'s (Editorial Ecuador) principal business line.