Striving for a World with Minimal Food Waste and CO2 Emission

TOO GOOD TO GO

The Danish company Too Good To Go is a revolutionary tech company. In an innovative digital, simple and popular way, they contribute to changing the attitudes of consumers and companies to food waste and resource use. The initiative is fully in line with the new global goals for sustainable development.

Too Good To Go is an app for food rescue which acts as a mediation platform for surplus food between gastronomic establishments and consumers. Their users can buy fresh surplus food from restaurants, bakeries, supermarkets, and others at a reduced price to save it from the disposal. The innovation is a win-win situation for everybody: Delicious food at a reduced price for the customers, less waste for their partner companies and conservation of resources for the environment!

The app itself is free of charge and the meals are at least 50% cheaper than the normal price. As a self-collector, you reserve and pay for so-called surprise bags or boxes digitally via the app. At an individual pick-up time, you collect the food and in this way, there is edible food saved from the bin. Instead of throwing freshly made food into the garbage, people can enjoy these amazing meals. Too Good To Go makes a connection between the firms and the customers to create value for both the customer and the firm. The restaurants will earn some profit, instead of having costs since the food will be bought and eaten instead of being wasted.

The founder of Too Good To Go is Klaus Pedersen who worked as a student kitchen assistant at a restaurant in Copenhagen. During his time here he got an insight into how big of an issue the daily food waste was. He noticed how the staff of the restaurant threw away fresh food on a daily basis. After a while he took the decision of consulting this problem together with his colleague/friend. Together with three other friends, they started to create an app where people could order food and created a network with stores, restaurants and hotels. This was the start of Too Good To Go, where their biggest focus was to create a modern and useful app and create contracts with important customers.

Too Good To Go is dedicated to reduce food waste to its minimum. Food waste is a huge global issue with one-third of all food produced being wasted. The app, connect individuals to individual portions to reduce food waste, which is something that non-profit organizations cannot do because of law regulations.

To add some numbers to what To Good To Go does, every saved meal saves 2.5 kg of CO2 and until today 50 million kilograms of CO2 have been saved. This means that reducing food waste is one of the most important things we can do against climate change, since CO2 emissions have a strong negative impact on our environment. Currently, 14 million users in 13 countries are already participating in this, and Too Good To Go together with their users have been able to save over 22 million meals!

The company’s mission is to inspire and empower. They are driven to take action and to make a difference in the world. The motivation for doing the purpose is mainly to achieve the Sustainable Development Goals and to ensure sustainable consumption and production patterns 2030. Victoria Prillmann mentions in the interview:

“The Goal 12.3 was set to halve per capita global food waste at the retail and consumer levels, and reduce food losses along production and supply chains, including post-harvest losses.”

As explained above, the fondator, Klaus Pedersen, worked in a restaurant in Copenhagen and was very surprised about the quantity of food thrown away every day. He talked about it with his friends and discovered that this kind of practices were common in the restaurant industry in Norway. So basically, the inspiration came from his daily life and he wanted to solve a concrete problem he was able to observe at work. The will to do a small change at work lead him to create a worldwide app used by thousands of people every day.

The most important impact of the innovation on the business is the creation of the business itself. The creation of the innovation to connect gastronomic establishments with a surplus of food with customers is the source of the business model of Too Good To Go. The need for this innovation as a possible solution for food waste is shown in the already saved 20 million meals, with the number ever growing. Next to this, the innovation keeps expanding and creating opportunities for Too Good To Go, as they are engaged in not only connecting surplus food with consumers but engaging in much more activities that battle the practice of wasting food. Victoria Prillman elaborates on this by mentioning the following:

“We are active in many countries and not only in mediation between restaurants and customers but in engaging ourselves in much more, like working with schools and universities and inspiring people, businesses and politics. ”

Especially the app and social media accounts draw a lot of attention regarding the societal issue of food waste. Because these platforms posted the latest news about food waste, seasonal shopping guides, recipes, tips for zero waste, people were provided with a very different and innovative view regarding food waste. The app and social media accounts really boosted the general knowledge about this serious issue. Too get the followers even more involved, Too Good To Go organized events and competitions with prices such as one free month of Too Good to Go. Due to these initiatives of the company and actions to involve society, it has positively influenced them and somehow forced them to take food waste more serious.

As said before, current food waste counts for 8% of total CO2 emission. That is a lot and can be reduced by making use of Too Good To Go. To give you an idea of the major impact on the environment; There are over 20 million meals saved which means that more than 50 million kilo CO2 emission is being prevented. Moreover, due to the success of this innovation and the attention it has received in the media, Too Good To Go is collaborating with a lot of social institutes, government and food companies to try to find efficient solutions to food waste problems in their own branch.

One of the short term effects Too Good To Go wanted to achieve is to impact the political agenda in at least 5 of our key countries through our own campaigns and initiatives with fellow partners by 20209.

An example of this desire is that in February 2019, Too Good To Go launched a new initiative on date labeling in Danish supermarkets. A coalition of industry leaders in the food & drinks sector has therefore pledged to add “often good after” to goods labelled “best before” to remind consumers that food may still be consumable after the specified date.

The long term effects of Too Good To Go can mainly be found in the environmental impact their business has. According to them, one kilogram of food produces on average two kilograms of CO2 emissions. Because this surplus of food is not thrown away but instead consumed, overall less food will be produced then when this food was thrown away. This means not only impact on emission levels, but also on waste production and protection of the agricultural landscape.

Too Good To GO currently has 14 million users in 13 countries, which have ‘saved’ over 20 million meals combined. According to their statements, every saved meal saves 2.5 kilograms of CO2, which means over 50 million kilograms of CO2 have been saved because of their business.

Too Good To Go is mainly supported by their investors but for every portion sold via Too Good To Go, they receive a flat commission of € 1.09. The amount is due to the many steps that they take off the farms to make it as easy as possible for their partner companies to decide if they want to participate in their food rescue concept. They take care of the cashless payment of the orders, they are continuously optimizing the app, the acquisition of for example new partner companies, customer service, communication with their customers on their social media and marketing. In addition, an annual membership fee of € 39.00 will be charged, but only after a trial period of several months have elapsed after the partner company has already earned the amount due.

Too Good To Go is the perfect definition of a Corporate and Social responsible company. It benefits the customer in a way that they are able to buy food for a lower price in a food shop nearby. Basically, this app is for everyone but can become a true help for people who do not have a lot of money or for students who live in an expensive city.

For the owner of a food shop, it is an effective way to make more profits with products they should have been thrown away. It also is a way to make their business more responsible and to attract new potential clients. Too Good to Go is very successful because it creates a win-win situation for both customers and shop owners. Moreover, the company is involved in non-profit projects dedicated to reduce greenhouse gas emissions by planting a tree per 100 saved meals.

The goal of this project is clear which Too Good To Go mentions as follows:

Only one thing to say: Congrats Too Good To Go! 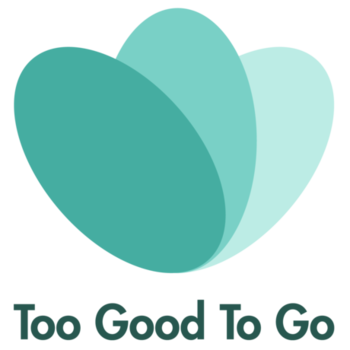 TOO GOOD TO GO

The Danish company Too Good To Go is a revolutionary tech company. In an innovative digital, simple and popular way, they contribute to changing the attitudes of consumers and companies to food waste and resource use. The initiative is fully in line with the new global goals for sustainable development.