Pacha Soap Co. is an all-natural hygiene brand that sells products like soaps, bath salts, and soothing bath balms. All of Pacha's products are crafted in the United States and are free of synthetic fragrances, SLS, parabens, and sulfates. Pacha’s cruelty-free and natural products are made to spread goodness around the world by focusing on and supporting four major initiatives. These initiatives are ethical sourcing, clean water, hygiene education, and small business opportunities.

Pacha Soap is centered around the values of radical transparency and ethical sourcing. The company supports clean water initiatives, hygiene education, and small business opportunities worldwide. When customers purchase Pacha products, they are receiving something unique and handcrafted not found with mass-produced products. Pacha's true innovation is its efforts to support job creation and education for people in underdeveloped countries.

Pacha is a company that is rooted in the idea of wanting to make a difference in the world. The idea for Pacha arose while a couple from Nebraska was volunteering in Peru and realized that true change comes from empowering people, not simply giving support and handouts. Pacha Soap is made from natural ingredients. Pacha spreads love to people around the world. With every purchase, Pacha supports clean water initiatives and small-scale soap entrepreneurs in developing countries. By implementing these initiatives and supporting various sustainable development guidelines, Pacha can provide resources to underserved countries and promote sustainable growth, not just short term solutions.

Despite being a relatively new company, founded in 2011, Pacha conducts quarterly impact reports to recognize its support to underserved communities. These reports include metrics on the number of wells the company has sponsored and gallons of water provided. Creating these reports displays the company's commitment to transparency, but numbers alone fail to capture the full extent of Pacha's work. The company is focused on acquiring more partners to carry out its work of making positive global change. Increasing brand awareness will allow Pacha to gain market presence and promote change on a larger scale. 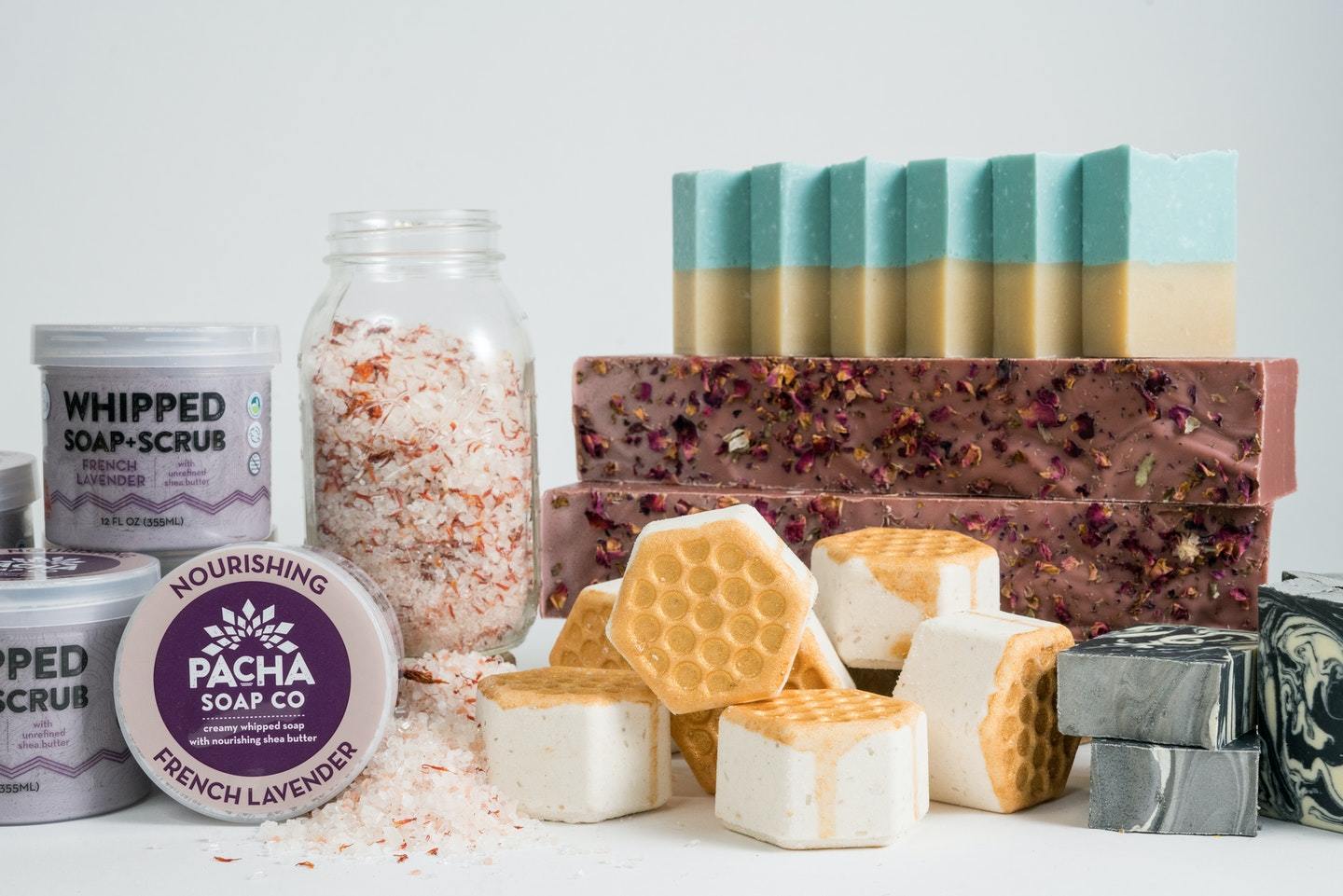 This photo is a representation of the products that are offered by the Pacha company. All soap bars are ethically sources will all natural materials and scents.

Andrew Vrbas, the founder of Pacha Soap, believes that people have an innate desire to meet more than their most basic needs. People want to feel that life has meaning and importance. Finding this meaning and self-reliance contributes to a deeper sense of self-respect. In our interview, Andrew talked about how "[t]here's a VP of impact & sourcing within the company which speaks for engaging ad campaigns. We started as a husband and wife in Hastings, Nebraska. They were traveling in Peru (doing mission work), and they saw a need for soap. They also had the idea that business frees people. The couple decided to teach the native people how to make soap, and they would sell it within the community, and the money would be recycled as the community grew." This idea that "business frees people" is a huge inspiration behind Pacha's innovation and growth. Pacha aspires to create sustainable innovation that allows for communities to grow and prosper. The company believes that the formation of small businesses is an integral component of this sustainable growth.

When Andrew and his wife, Abi, were volunteering in Peru, they witnessed this need for sustainable innovation firsthand. Extreme floods shook the village they volunteered in. It was hard for the couple to see an already fragile infrastructure that was also dependent on tourism taking such a hit. The couple witnessed that awful things can happen to good people trying to provide for their families and lead purpose-filled lives. The couple wanted to know what they could do to help. One night, Abi experienced a lightbulb moment. The Peruvian people were connected to the Earth, “Pacha,” in a way that many other cultures had forgotten. Abi wanted to connect hygiene to the natural world. After teaching hygiene and soap use at local schools, she discovered that some children did not know what a soap bar was. By using minimal equipment and herbs & plants found in nature, locals could meet their needs for soap and hygiene education through natural soap production. Instead of donating soap, this soap production concept would empower the community by creating economic freedom. People would be provided with the opportunity to unlock their entrepreneurial potential. And thus, Pacha Soap was born.

Andrew and Abi find their purpose in serving others, and they set out to help others craft a beautiful product. Pacha (which rhymes with cha-cha) means "Earth" in Quechua, the Peruvian people's language. Every purchase of natural Pacha products spreads love to people worldwide, helps fuel clean water initiatives, and benefits small-scale soap shops in developing countries. These sustainable ventures provide much-needed water and sanitation resources to entire communities while boosting the local economy.

In just a few short years, Pacha has made a lasting impact within various communities around the world, and the company's just getting started. Throughout its supply chain, Pacha works tirelessly to improve the lives of all those involved in the creation of Pacha products. The company's ethically sourced ingredients help support small farmers across the globe. At the end of the supply chain, every purchase supports clean water initiatives and hygiene education for healthier communities and provides small business opportunities. Approximately 2-3% of every dollar of sales goes directly towards impact initiatives. Along with teaching children proper hygiene practices, Pacha helps fund the creation of soap shops in developing countries through skill development and entrepreneurial practices that establish self-sustaining commerce.

Pacha's mission statement, "Raise the bar," indicates the hard work and selfless effort that the company has put into bringing about positive change. This altruistic attitude has set a high standard for other companies. When asked about the company's plans for the future, Nick responded with another question for us to ponder: "What is sustainable sustainability? What are you doing that will sustainably be sustainable? Let's focus on building things that we can continue to add onto." For example, Pacha could come into a developing country to host a charity event for a week, but this might not be the most efficient use of time and money. Instead, Nick suggests that Pacha works with non-profits already there, who know the people within the communities, to partner with and fund them. This is a sustainable way for any business to maximize its impact. As Pacha continues to grow, so will its ability to positively affect more and more people.

Pacha Soap's transparency, sustainability, and natural ingredients are proving to be key factors in the company's success. Consumers are becoming more and more aware of the impact their purchases have on the environment, and Pacha has done a wonderful job at placing this at the forefront of its brand. When asked about customer retention, Nicholas Virginio, Vice President of Marketing, responded, saying that "natural and sustainable are probably the two biggest [factors]" that keep customers coming back for more. He further explained that "[m]ost consumers think some brands are natural when they are not," and that Pacha is one of the few truly natural soaps available. Although it presents its challenges at times, educating its customers on Pacha's products' true nature is helping the company grow a steady and strong customer base. Nick also touched upon the companies "show not tell" policy, where Pacha strives to show its customers that the company is making an impact, not just claiming to make one. Pacha has created a brand that customers feel an emotional connection to.

As Pacha has grown, the company has also provided hygiene education, clean water, and small business opportunities to people outside of the organization. Pacha has provided hygiene education for 130,000 children globally and is responsible for providing 9,000 people with access to clean water. As a relatively young company, founded in 2011, Pacha's hygiene education and clean water initiatives have already made an impact that will continue to grow in line with the company itself. Finally, Pacha has provided investments and small business opportunities around the world. Pacha helps to fund the creation of soap companies in developing countries and has purchased over 5.2 million locally made bars of soap for donation to schools. Pacha's initiatives and organizational transparency have proven to be beneficial. These things will continue to help the company as it grows.

Pacha allows customers to take part in supporting small-scale soap shops and clean water initiatives around the world. With the purchase of Pacha products, opportunities are given to others to "free their entrepreneurial spirits and lift themselves from poverty." The company's innovations have specifically benefitted Peruvian citizens by providing needed water as well as sanitation supplies. In addition, every purchase of a Pacha product helps fuel clean water initiatives and small-scale soap shops in developing countries. These soap entrepreneurs boost the local economy within their communities through the creation of employment opportunities. This effort to bring opportunity to underserved communities is a step in the right direction for ending the poverty cycle.

Pacha Soap is a for-profit company. On its website, it says, “they believe the free enterprise system is the most efficient way of building infrastructure and providing sustainability in developing nations.” As a for-profit company, Pacha does not have to depend on donations, which allows the company to give help when and where it is needed. Pacha Soap is clean. This means it is free of parabens, harsh surfactants, sulfates, propylene glycol, phthalates, petrochemicals, and dyes. The products have natural and uplifting scents like lavender, cinnamon, patchouli, and rosewood. Each bar of soap is handcrafted, all-natural, and environmentally sustainable.

Pacha Soap is on a mission to implement sustainable solutions to break the poverty cycle, promote health and well-being globally, and provide quality products for its customers. Pacha offers customers an opportunity to help provide clean water for communities, soap for school children, and jobs for men and women around the world. 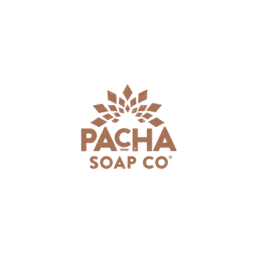