Bosco, Russian retailer of luxury goods, takes an active part in achieving the 5th (achieve gender equality and empower all women and girls) and the 8th (promote sustained, inclusive and sustainable economic growth, full and productive employment and decent work for all) goals of sustainable development. What is more, the company is promoting an eco-friendly lifestyle by planting cherry trees during Bosco festivals and team buildings.

During hard COVID-19 times, not many Russian companies have survived the crisis. Bosco di Ciliegi is a company that uses an innovative approach in order to save all the working places for their employees. They have provided apps and programs, so that office workers could work from home during lockdown. In addition, after all the employees have come back to offices, everything in the rooms is sanitized regularly. Employees who are working in sales are protected and provided with all necessary stuff and vaccination. The approach of caring is very important and gives an opportunity to the company to save all the working places for each employee.

This caring approach is also seen in relations to women who are working in the company. A lot of the organization's employees are women, who enjoy excellent working conditions and equal pay as their male colleagues. Olga said that the company held several educational lectures on the topic of sexual harassment, ethical behavior, which improved the interaction between employees. The company also ensures the full and real participation of women and equal opportunities for them to lead at all levels of decision-making in the economic and social life of employees.

What is more, every five years there are team buildings for the whole company where everyone plants cherry trees. Five years ago there was such a team building activity at VDNKH and this year at Gorky Park. This year anyone could take a cherry tree to plant it wherever they wanted. Also, company provides its employees and people participating in these events with educational lectures about current SDGs and the importance of achieving set goals. Therefore, with this approach, the company develops an eco-friendly culture of caring for nature and an understanding of the importance of sustainable development goals among its employees and other people. 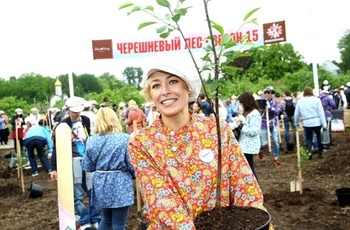 Olga said that she had been a friend of the founder of the company Michail Kusnirovich and his wife Ekaterina Moiseeva. They have built the company together and Ekaterina is a commercial director of Bosco di Ciliegi. Olga also said that the marriage of Michail and Ekaterina was based on love and respect, and the same principles of interaction were transferred to the company for a harmonic and healthy environment in the working team. Thanks to this, their marriage was very strong. When creating the company, Mikhail and Ekaterina made sure that their family principles of interaction were transferred and projected onto the company for a harmonious and healthy environment in the work team. It doesn't matter if you are a woman or a man, everybody is equal. If you do your job well and maintain a friendly atmosphere, you are treated like a family member, you are respected, you become part of something important. It is all about the SDG 5: Gender Equality.

In relation to SDG 8: Decent Work and Economic Growth, “It is worth mentioning that if you are already an employee of the company, then you already have a second family. This is one of the main ideas and inspirations of the company. Every employee is important here, they really care about you.” Even during such an unstable time as the 2019 pandemic, the salaries and jobs of employees were preserved. Because the company understood the economic situation and tried to help. Founders are really conscious about the internal environment, and every employee is important. Every team member becomes a part of the company's family, that is why it is almost impossible to expel someone. Due to this attitude even during the pandemic employees’ salaries and workplaces were kept.

At some point, the company was inspired by another idea to have an environmentally friendly campaign. They decided that it was never too late to start moving in this direction, and since their symbol is already a cherry tree, the founders of the organization decided to conduct a campaign for the regular planting of these trees and landscaping of the surrounding area, making the surroundings green.

How is the company implementing SDG 5: Gender Equality? When we started researching the company, we needed to find a person from Bosco di Ciliegi who could be interviewed. We realized that many leadership positions in the company are held by women. We managed to get in touch with Olga Sprogis, who agreed to give us an interview, during which we mentioned that we were surprised at how many women are working in management positions in the company, to which she said that this is indeed the case. The company does not support any kind of gender discrimination. Here everyone is equal to each other, everyone has the right to develop and build their own career.

The women working at Bosco di Ciliegi provide valuable support to their families. With this financial power, they begin to put their children in good and even prestigious schools, invest in them and contribute to their own development and the development of their families, achieving the goal of gender equality.

The COVID-19 pandemic has led to a historic recession with record levels of job loss and overall unemployment, triggering an unprecedented crisis affecting the “disadvantaged” segments of the population the most. At the same time, Bosco did not fire or reduce the salaries of employees, both women and men. This helped that, if you look at the situation in the world as a whole, then Bosco has contributed to the creation of a solvent population, which naturally plays a big role in the development of the regional and then the world economy.

We were also able to discuss what attention the company pays to the problems of ecology and gardening – “Today it is necessary to carry out all types of landscaping and landscaping. That is why we adhere to such values ​​as caring for the environment. With this event, we attract the attention of not only our clients, but also people who, like us, are concerned about the state of our ecology and gardening.”

While interviewing Olga, we asked how gender equality in the company is paying off. “Since the company is operating within equal rights and opportunities for everyone it helps Bosco to develop more fully simply due to the fact that more ideas are welcomed and heard,” during the decision-making process of the company. There is equally and proportionally present different genders, different age groups and everyone's opinion, regardless of gender, is taken into account. This allows the company to approach issues from different angles of human perception.

When talking about the preservation of jobs, Olga stated that it has become a benefit for the company because for potential new employees they act as a socially oriented safe company. Also, it increased the commitment to the organization of existing employees. Moreover, the company has retained already qualified, trained employees, which means that in the future they won't need to look for new ones again and train them, which would certainly require a lot of money and time. In addition, for the company, the decision not to lay off employees during the pandemic was an impetus for the implementation of new technologies in the workflow, so that even working from home, employees had the opportunity to be fully involved in the workflow.

With Olga we also talked about the benefits of such a socially responsible approach for their business. According to Olga Sprogis, such a culture of behavior at work, as well as an event for planting cherry trees eventually turned into an incredible transformation in the behavior patterns of the company's employees. Holding such events has become one of the aspects that have shaped the corporate culture of the entire company. “After all, if you think about it, then understanding at a deeper level of social responsibility to the society and nature of each individual person forms his personal qualities, which certainly include responsibility for the work done, promised obligations, and so on” – Olga stated.

The working collective also rallied, realizing that, in addition to their main duties, they are doing something big, for a more global goal, for something bigger than each of them, that they are adjacent to the part of humanity which, even with small steps, but surely go to the large-scale goal of preserving the planet. The awareness that is being formed through educational lectures made them realize once again that they were working for the same cause, “they were in the same boat”, and this understanding from the plane of nature conservation was also transferred to the working plane.

Another benefit is a wide choice of partnership agreements with cosmetics companies that work on the principle of “cruelty-free”. Which undoubtedly had a positive impact on the company's revenue.

Also, an objective bonus was wider, namely, positive publicity in many information channels. Representatives of the company began to be invited to many forums dedicated to corporate social responsibility in companies both in the Russian market and abroad. Also, according to Olga Sprogis, the company was mentioned multiple times in the media without self-initiation, which certainly exceeded the plans for the company's marketing strategy.

The organization sets an example for all start-ups or already existing companies, since Bosco is a leader in the industry, and the CEO of the company has a certain influence, as a person and an entrepreneur. The principle of work and development of the company will become a similar pattern of development for many other companies because its healthy and harmonious corporate culture and socially responsible thinking lead to more efficient and productive work in all of the areas of activity.

Ensuring equal opportunities and working conditions for all employees, regardless of gender, allows employees who have been accepted for the position and are accustomed to such an attitude, to extend a similar model of behavior to other areas of their lives, to set an example to their friends and acquaintances.

In addition to planting trees, Bosco also organizes Saturday and Sunday cleanup days, which it takes with the utmost seriousness of the organization. When celebrities attend these events, more people begin to think about the seriousness of environmental problems in our time, and this also gives rise to the idea that every member of our society can help the planet. Thanks to the BOSCO company, landscaping, improvement and cleaning of the territory of our country takes place, for which we are fully responsible.

Bosco showed us how a business can be profitable and successful while adhering to its sustainability goals. 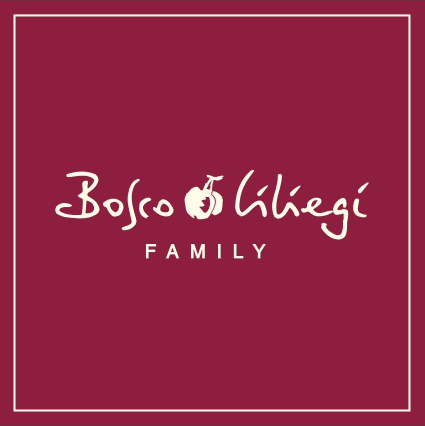 Bosco di Ciliegi is a Russian company, the main shareholder of the Moscow GUM and the owner of a chain stores selling clothes and luxury goods.

The symbol of the company is cherries, and each anniversary the company holds tree-planting events in large parks in Moscow, as well as the Cherry Forest festival.