Café Down is a coffee and bakery store in Ankara, Turkey. Since February 2001, it is reducing social inequalities between mentally disabled people and nondisabled ones. The café is ran by workers with down syndrome, who work as waiters, waitresses, cleaners, hostelers, pageboys and baristas. Currently, there are 12 men and 16 women workers with down syndrome (they work in double shifts, a day). The aim of this business is to bring mentally disabled individuals, who are under the protection of the Ministry of Family Labour and Social Policies, into social life as productive individuals. This business was established and run by the three entrepreneurs who are associated with the Saray Engelsiz Yasam (Saray Nonhandicapped Living) social organization. It is a rehabilitation center for disabled people in the city, and it is an initiative of the Ministry. This rehabilitation center is a social service organization that serves mentally and physically inadequate children, young people and adults. It provides professionals such as teachers, trainers, and mentally disabled youths to the Café. The Centre and Business are in a partnership, but both sides do not get any benefit. This place is a for-profit enterprise for sure, but on the contrary, incomes of the business are not transferred to any organization or person. The café is economically self-sufficient in meeting disabled workers’ needs, wages, social insurance, etc. Café Down is the only example for this project in Ankara.

Actually, this café was established as a project of the Ministry and it consists of two parts. The young people who will work at Down Café are determined by the evaluations of the Establishment Evaluation Board and the rehabilitation units. Selected young people with disabilities primarily take service and waiter training, which is given by the tourism and hotel management teachers of the Turkish Ministry of Education. After completing this training, they can participate in business life. This program is 40% theoretical and 60% practical. In the training of the cafeteria, the kitchen, the guesthouse, the laundry and the lobby, almost all of the work areas are taught to these young people with down syndrome according to the extent of their ability to perform the tasks provided. Training is carried out between 80–120 hours depending on the need. In addition to newcomers, existing workers also receive this training at least once every two years to update their information.

In order to ensure that the people with down syndrome benefit from the cafe operations at the highest level, there are professional workers as well at Down Café. In this respect, a special education teacher, 4 assistant staff and 2 cashiers were assigned by Saray Rehabilitation Centre to guide the young workers with disabilities to support, follow up and conduct the cafe operations. The financial, legal and operational managements are carried out by these professionals. The cafe is open 6 days a week between 8:00 in the morning and 20:00 in the evening.

At Down Café, young people with down syndrome work in two shifts as two groups of 14 people between 08:00–13:00 in the morning and 13:00–19:30 in the noon. This is done 6 days a week. General cleaning is done on Sundays and there is a weekly holiday for the disabled workers. The working hours of them are not as long as other workers. They receive a monthly minimum wage in return for their work . 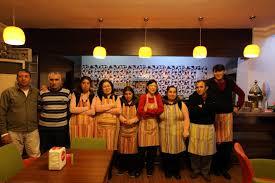 Bozdemir, Güneş and Alboğa, who work at Saray Rehabilitation Center in Ankara, prepared the base of the 'Down Cafe' Project, consisting of the disabled staff. Their aim was to join disabled young people over the age of 15 in social life and to ensure that they get a financial support as well. This step, taken by three volunteer experts, was initially supported by many others. However, when the project began to materialize, the number of supporters began to decrease. Young people had to be trained in waitressing. Tourism Vocational High School teachers were spoken. However, many 'educators' avoided the 'burden' of teaching disabled people except Zubeyde Ors who is an Ankara Tourism Hotel Management Vocational High School teacher. Ors said that students can provide such a service. The Down Cafe Project, consisting of three volunteers, won the fourth member.

At the beginning ,13 out of 14 young people, who were mentally disabled and one of them was physically disabled, were educated for two months. The training process meant hard times for both experts, for the high school students and for the young people receiving education.

In the first days, the young people hardly spoke. They did not communicate with each other and with the education team as well. They described them as foreigners.

When the young people began to get familiar with each other, the ice was broken. They began to act with limited group consciousness. They now cross across the street in groups of four, holding hands, and when one of the boys wanted to go to the toilet, his seven boy friends followed him! After two weeks the young people, who were previously divided into two groups as girls and boys, started to walk together and help each other in their individual works.

Three weeks after the training began, they became aware of their work. They started to think and think about the points a waiter should pay attention to while doing his job. In the mornings, they checked their clothes before boarding their services, and warned their friends who didn’t pay attention to their duties.

Another interesting aspect of the training was that most of the teaching staff were high school students. The students became friends with their 'students' at the beginning and started to look forward to the training days.

People with Down Syndrome are much more social than we think, and there is no obstacle for them to actively participate in the workforce and daily life, when the necessary opportunities are provided. Although people with Down Syndrome do not always understand the daily life, they work together with us in sectors such as service and entertainment and perform very successful works.

The Down Café in Kızılay has a special place in terms of being the first business center that supports the participation of disabled people and providing them a profession. In order to underline the importance of Down Cafe, it would not be wrong to say that this is one of the first concrete steps taken in Ankara, in order to enable people with disabilities a participation in social life and gain economic freedom. Being located in a central location is an important advantage in both terms of transportation and awareness. It is very important to support the steps that can be taken in order to increase awareness of people who are not aware of the active role of people with Down Syndrome.

It is obvious, that the ‘Down Cafe’ provides great benefits to these teenagers and the society. The greatest benefits of the business are, to give a chance to the disabled and to sustain their life with equal conditions. At the Down Cafe, all workers get paid (75% of minimum wage) and get an insurance. Many characteristics of the young people are expected to set an example for non-disabled employees. ‘At Down Cafe, they are committed to the business and they are motivated by the awareness of being a part of a very important business/project. Among the customers, there are families with disabled friends or children. They see the Down Cafe as a meeting place. They say to their children, that they feel very comfortable there. They even offered to pay for their children to work at the cafe. The Down Cafe employees have been prepared for working at all cafes. New employees can be trained if the working ones move to other places.

This project provides awareness for disabled people who live with mentally normal people, but are not recognized by them. Recognizing does not mean commiserating, not giving grant to them. It actually means sharing your space, your workplace with them without any self-interest and opening our hearts to them for just loving them. In an interview made by Anadolu News Agency, Sevgi Talaşçıkaran, who has twin down syndromed boys and is also the aunt of one, told to our author Umut Şimşek "My biggest wish is to join them in life, to make them have a job. We want that people change their point of views, to this issue. We try to break this perception as much as we can. The crucial point is that my sons could be able to dwell on their lives without one’s aid, they could have a job like a normal person. I strongly believe that they are going to make my dreams real, they are going to gain themselves freedom by their own effort and hard working. All parents that have down syndromed children wish the same thing. Therewithal, the Down Cafe, meets the parents’ wishes as much as possible, and it tries to adapt people with down syndrome to normal life. Sometimes our orders may be delayed or the communication patterns may be different as from the fixed patterns of the society, but both the customer and the employee satisfaction can be achieved with a single method. Of course, this method is called tolerance. We may be different from each other, but love, one of the greatest needs of human beings, is a great need for them. It is also very good for their emotional development. Therefore, showing tolerance and love, will help them work more efficiently and meet their human needs." 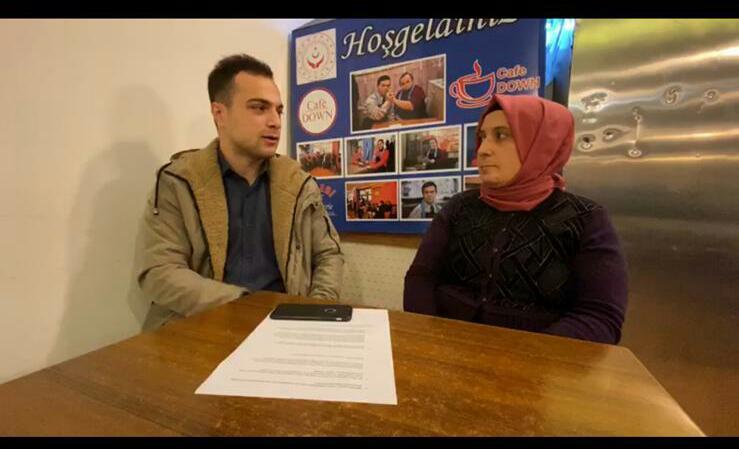 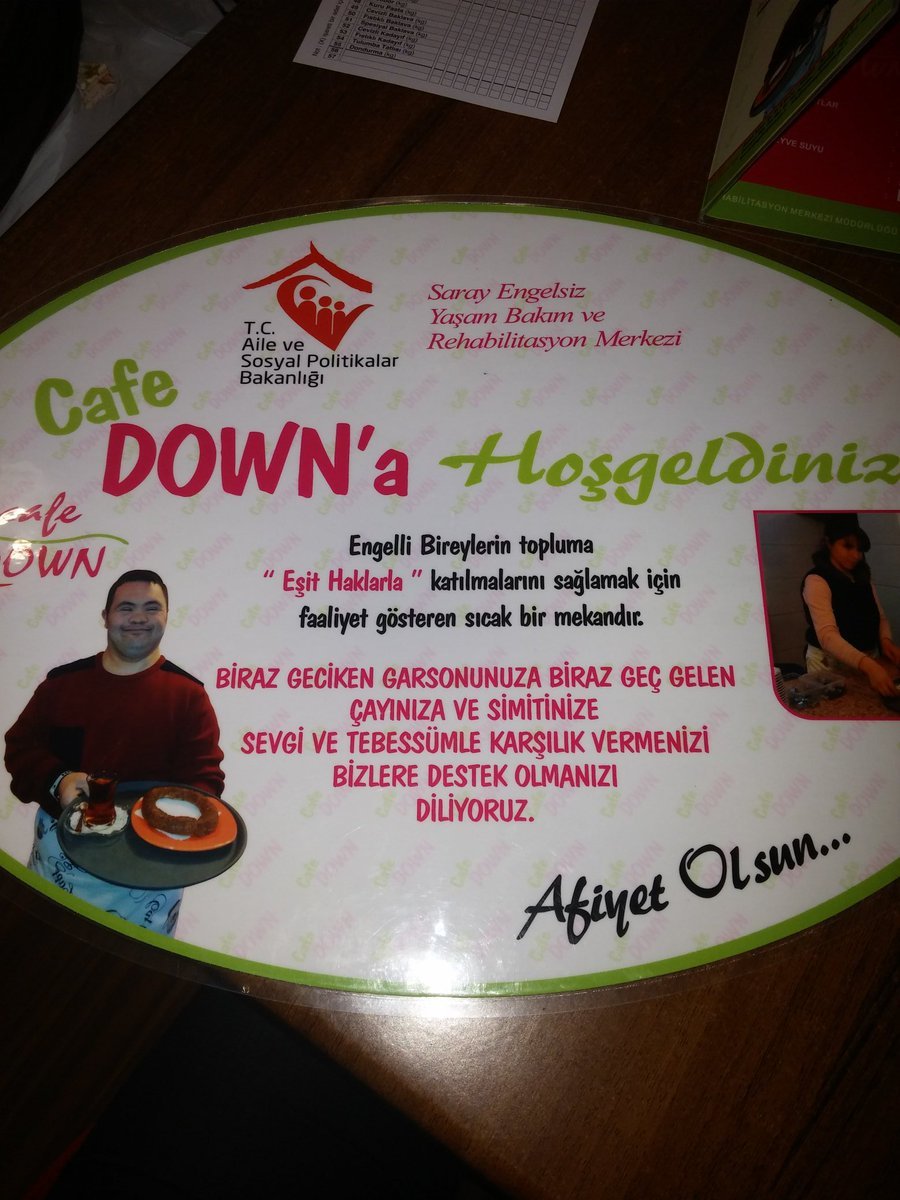 Down syndrome is one of the most common genetic birth defects. It affects about 1 in 800 babies. Have you heard of ‘Down Cafe’? Founded by three volunteer entrepreneurs, Down Cafe has been in service since February 2001 in Kızılay, Ankara. 28 young people, who have no parents, most of whom are mentally disabled and one with orthopedic disabilities, work at the Down Café.