Recycling Today for a Better Tomorrow

Wakefern Food Corporation is a grocery retailer cooperative operating in 7 states and under five different banners. They have been striving toward environmental protection for decades, implementing various projects ranging from sustainable sourcing of seafood to wildlife protection. Their primary innovation came with the construction of their privately-owned recycling center. This center continues to be a significant driver of Wakefern's footprint reduction, having recycled over 2.5 million tons of waste since inception.

Wakefern's recycling operation began in the late 1970s when their private recycling center opened. More expansion came with the implementation of recycling programs put into place by each cooperative member. It goes beyond the typical boundaries of standard recycling such as paper, plastic, glass, metal, etc. As a grocer, they find ways to make use of all the food waste created in day-to-day operations. In addition to traditional recycled materials, their system includes used oil, meat & bones, food scraps, and expired foods. These substances get divided into one of two recyclable categories. They can either be sent to compost, enriching the soil for the growth of better crops or converted into cattle feed by a third-party vendor. This initiative prevents a massive amount of waste from ever entering the landfill. In 2018 alone, 10,000 tons of food waste went to compost piles. In addition to this, Wakefern warehouses donate as much food as possible before expiry, further reducing landfill impacts. Just last year, 5,000 tons of food were donated to various causes preventing increased food waste from leaving the facility.

This push toward sustainability arose from various sources concurrently. Both cooperative members and corporate warehouses were experiencing issues as a result of their waste. These include "increased trash pulls, higher tipping fees at the landfill, increasing regulations, improved recycling markets, and longer travel periods." Wakefern's main priority, however, was following their philosophy of "doing the right thing."

In response to the request from members, Wakefern formed various cross-functional committees around critical areas such as recycling, composting, environmental engineering, indirect procurement, and environmental sustainability. Each of the committees began breaking down the waste issue, attacking from a multitude of different angles. This collaboration inspired a culture of participation in the efforts and bettering the environment.

This innovation lends itself to the company's mission of helping small businesses succeed in a big business world and helping people to eat well and be happy. The environmental committee also has set forth a purpose of its own centering on "people, planet, and profits." In an interview with Suzanne Forbes, a sustainability administrator at Wakefern, said, "Shoprite has been active in environmental and community initiatives like today for several decades. One of many examples is our recycling center in Elizabeth, NJ, which opened in the 1970s. The same goes for our food donation program and other efforts, like creating playgrounds from oral care products. We do this to reduce waste, decrease our environmental footprint, and assist people in our communities." 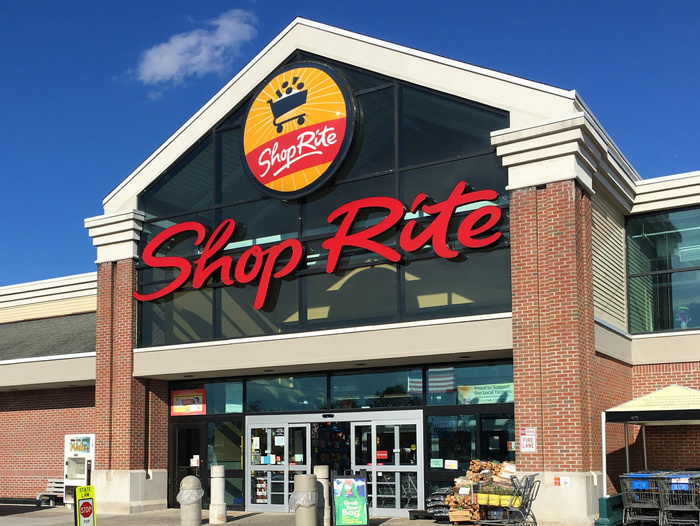 Wakefern's main banner, ShopRite, has been making every effort to cut down on their waste production.

The inspiration for Wakefern's innovation, its waste reduction program, began with the transportation coordinator/recycling lead. Although he is now retired, his ideas are what got the innovation off the ground. According to our interview, he was likely the person responsible for hiring the vendors, negotiate agreements, and made the whole thing come together. Regarding the food donation program, another woman who has since retired was responsible for its organization. She helped to choose the supported causes and manage the intricacies of the logistical operations. As for the composting system, "a handful of people in our engineering division did the necessary research to make it happen," said Forbes. Many initiatives have since been implemented over the years.

These ideas began springing up when the company's costs began increasing due to a lack of environmental action methods. Some of these costs include increased tipping fees at landfills, increased environmental regulation, and longer travel time to landfills. All these expenses could easily see a reduction by creating a new waste reduction program. "Through the years, we continue to work across divisions to grow the programs, communicate them out to the community," and help the environment flourish, said Forbes.

The company changed its course on sustainability due to the increased customer demand for environmental protection and the member-company requests for changes to be made. While the goal was to ensure satisfaction to customers and members, the primary concern was doing the right thing for the environment and the communities in which the stores operate.

The innovation impacts many small businesses and the environment in general. It is environmentally friendly and promotes the recycling of old materials, which more companies should adopt. Landfills are filling all over the world every day, but with Wakefern's waste reduction program put into place, thousands of tons of waste are prevented from ever entering their local landfills. The individual member companies of Wakefern's cooperative, each being a small grocer company, benefits from the company's efforts to reduce their waste disposal frequency. One significant effect that is evident company-wide is the cost savings via food waste reductions. Closing the supply chain loop for the waste being recycled or reused further increases benefits to the company through the reduced need to purchase those materials as frequently.

The benefits of this innovation to Wakefern's business come from various facets of its operations. Improvements in cost-effectiveness and supplier sustainability help Wakefern to operate more efficiently on a day-to-day basis.

The innovation that has been implemented by Wakefern has reduced company costs, which increased involvement among different member companies and their stores. This number of positive effects result in the inspiring stories that Wakefern can tell their customers to inspire their participation in the waste reduction program. Forbes said, "I hope that this results in increased brand loyalty."

The concepts of customer retention and brand loyalty are of particular importance to the company. Their efforts to become sustainable and more accountable for their footprint are in response to customer trends and opinions flowing throughout the industry. The recent rollout of their brand new private label brands is also making strides towards the improvement of the company's corporate social responsibility. With the use of sustainable packaging, the products also assist in the recycling efforts not only at the company level but make it easier for consumers to recycle in their own homes. Wakefern hopes that these efforts will carry some weight in the public eye and the private opinion of those it serves.

As far as social benefits that have occurred due to the program's creation, they are apparent throughout their areas of operation. A large-scale shift to recycling not only removes solid waste from the cycle but also lengthens the lifetime of many of their products. When these practices spread to the hundreds of stores and warehouses that participate, the communities become more sustainable. Also, Wakefern's commitment to a sustainable future has and will continue to incite action from other businesses to do the same on all levels.

Environmentally, the effects of this program include a reduction in stormwater runoff, transportation emissions, and landfill leachate, water that runs out of a landfill after being polluted by several contaminants. It also serves to close the supply loop, preserving further unnecessary use of raw materials. These impacts serve to protect the immediate environment while still managing to make strides in preserving the earth as a whole.

A sustainable future will not only clean up the local environment but reduce environmental injustice overall. In our interview with Forbes, she said, "at our company, sustainability impacts so many areas. There is a myriad of positive impacts in the areas of People, Planet, Products, and Profits. The impacts of waste reduction influence every one of these areas". Profits and products are essential to any company, but it is the focus on people and planet that comes to the forefront. It all goes back to the company's mission of "Caring about people…". Protecting humanity's home is the number one way to care about people genuinely, and Wakefern works day in and day out to accomplish that goal.

Wakefern is a grocery retailer operating in 7 states seeking to serve the customers of each community in which they operate. Their mission is to "Care deeply about people, helping them to eat healthy and be happy."