Acciona pursues the goal of providing clean and affordable energy through their business projects. While preserving the environment and keeping it from climate change. In this case the innovation helped achieve the SDG of providing Clean and Affordable Energy and at the same time it helps tackle SDG 13 which is Climate Action through the recovery of the salmon fish habitat. Preserving the species also impacts positively the Life Below Water SDG.

Acciona has installed an elevator in the Palombera dam which is 20 meters tall. The dam is in the lower section of the river and represented an insurmountable obstacle to salmon. The elevator allows Salmon fish to overcome the obstacle and migrate upstream in their process of spawning.

The elevator is equipped with a technological system that attracts salmon to it, monitors how many fishes are in the elevator at any given time and for how long. The system analyses the proper moment in which to lift the salmon to the upper part of the river to avoid leaving fishes for too long in the lower part.

This innovation relates to the UN SDG's by tackling climate action and providing sustainable, clean and affordable energy. Where energy is created through the hydraulic plants and the salmon natural habitat is restored as well as their spawning process. 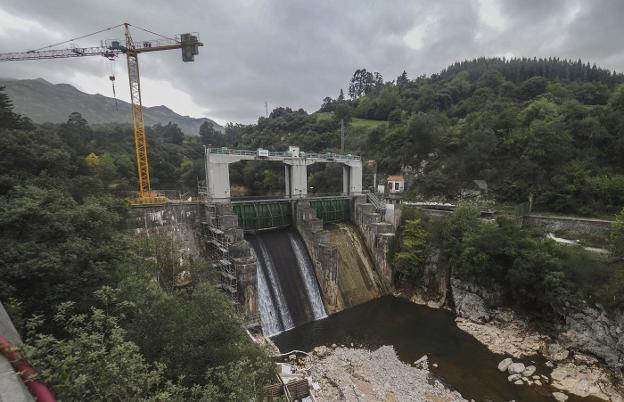 The team and the team leader of this project felt they had the responsibility to improve and bring back the ecosystem the Nansa River once had. The team thought that as Acciona is a leading company in the green energy sector, they had to keep leading and motivating others to do the same. They believed they had to be an example for society and other companies.

Acciona manages a set of 4 hydro plants that generate renewable clean energy equal to the consumption of 52000 homes. The environmental consequences of the construction of the Celis, Vendul and Palombera dams had made it impossible for Salmon fish to complete their yearly journey upriver to spawn. Acciona wanted to tackle this issue in keeping with its SDG commitments and in particular Global Goal 7 and 13 "Affordable and Clean Energy" and "Climate Action" as it seeks to speed up universal access to energy and combat climate change. " It was important to maintain the life cycle of the salmon fish". Since Acciona always tries to make meaningful impacts in all its projects it is common that through their work a third party is benefited.

The facility placed in the Nansa River in Cantabria removes obstructions to the regular movement upriver, allows salmon fish to return to their spawning zone in Cosío. Acciona invested 1.7 million Euros in 2019 in order to design and build the facility. The elevator was built during 2020 and it became fully functional in December of that year. It consists of a metal cage submerged under water that attracts Salmon fish to swim to and later transports them upwards a distance of approximately 20 meters.

Thanks to this innovation the salmon natural habitat has been restored after more than 70 years. The fish are able to return to the ocean employing a restored fishway. In addition to the elevator, the extension incorporates two fish ladders, at the Celis and Vendul weirs, a framework for real-time checking of the minimum remuneration stream within the waterway, and a station for measuring and logging stream volume within the upper reaches of the stream. By allowing salmon fish to spawn and reproduce fishermen and fish hunt has not been affected which benefits consumers indirectly.

It has been possible to recover the fish life continuity from 16 km to around 50 km of river course between the main and secondary rivers and with this to restore the habitat of the salmon in the Nansa River. A long term effect is that the survival of the species in the river has been ensured for the next 40 years which entails that commercial fishing will still happen in the next years as opposed to previous expectations.

Acciona Energia is a public listed company. As such investors assess not only economic performance of the business but its socio-environmental performance too. In particular the entities who provide debt to finance projects look very carefully at the company's credentials in ESG and are more likely to support their business. After this innovation Acciona has been approached by local government authorities to develop and design projects such as this one to improve and restore other wildlife while providing energy. We then can say that it has opened a business opportunity for the company.

Furthermore the vast majority of corporate electricity consumers, who are Acciona's clients are attracted by their impeccable track record and this helps to grow Acciona's client base and retain their loyalty. In turn those clients that do business with Acciona benefit their own clients by providing goods or services produced from clean energy which as a third party benefits Acciona with higher reputation given that that third party is satisfied to know that they do business with companies that sacrifice and make efforts to improve the world and tackle climate change.

Firstly it benefits the environment by protecting biodiversity, it also reestablished the levels of salmon fish back to normal which used to be their normal life cycle. Not only that but also the salmon fish is now able to spawn where it used to do it previously. Ensuring the continuing life of the species in Cantabria. This innovation restored the natural of the salmon fish after it was gone for 70 years.

As of society the local population benefits from richer biodiversity and both recreational and professional exploitation of fisheries that generates revenue for fishing companies which in turn provides jobs and food to employees and the public. At the same time this case serves as an example for other companies and for society itself which can become a turnover in business practices as we know them. Maybe from now own firms will be required to benefit the environment or at least to be more thoughtful.

Acciona is a company that produces clean energy form renewable sources such as solar, water and wind power. They also develop and operate infrastructure while keeping up with some Sustainable Development goals. Their main targets are a clean energy transition to provide services like renovating cities and transport.