ZinCo Canada’s innovative solution which helps advance the United Nations SDG’s (specifically that of sustainable cities) is their ‘Green Roof” systems – roofs fitted with biomass in the form of varying shrubs, plants, trees, and ground cover. Their roofs feature varying degrees of soil depth, and stormwater retention systems underneath. These systems (along with their respective fittings and retaining walls) are made of carbon-positive hemp and sugar cane plastic in conjunction with 100% post-consumer waste resources.

ZinCo Canada is a small-team of five experts in Green Roof technology, including Jeremy Wright, our interviewee and ZinCo’s Business Development and Project Manager. Together, this team develops improvements into their Green Roof systems, and distributes them to consumers across Canada.

Green Roofs improve air quality by absorbing greenhouse gases reduce cooling and heating costs for the building it is applied to, reduce Urban Heat Island Effect, capture and help manage stormwater, reconnect humans with nature, and allow spaces for native species to thrive. ZinCo only uses native plant species in their products by providing a space for them to thrive without invasive disturbance. Furthermore, ZinCo creates their Green Roofs with stormwater retention systems, allowing for water to be collected in grooves underneath the soil and then allocated to storage for non-potable use.

In 2005, ZinCo Canada was founded and has been distributing ZinCo’s Green Roof products ever since. That said, Jeremy pointed out some key ongoing innovations in their Green Roof systems, including working with the World-Wildlife Foundation to create circular Green Roofs where seeds are harvested from existing roofs and used to create new ones. Additionally, ZinCo Canada has formed a sister company called Sponge MicroGrids Inc. which produces de-centralized photo-voltaic systems to be used in conjunction with their Green Roofs, allowing consumers to become energy-dependent. ZinCo Canada distributes their products nation-wide; however the majority of their Green Roofs are installed throughout Southern-Ontario. 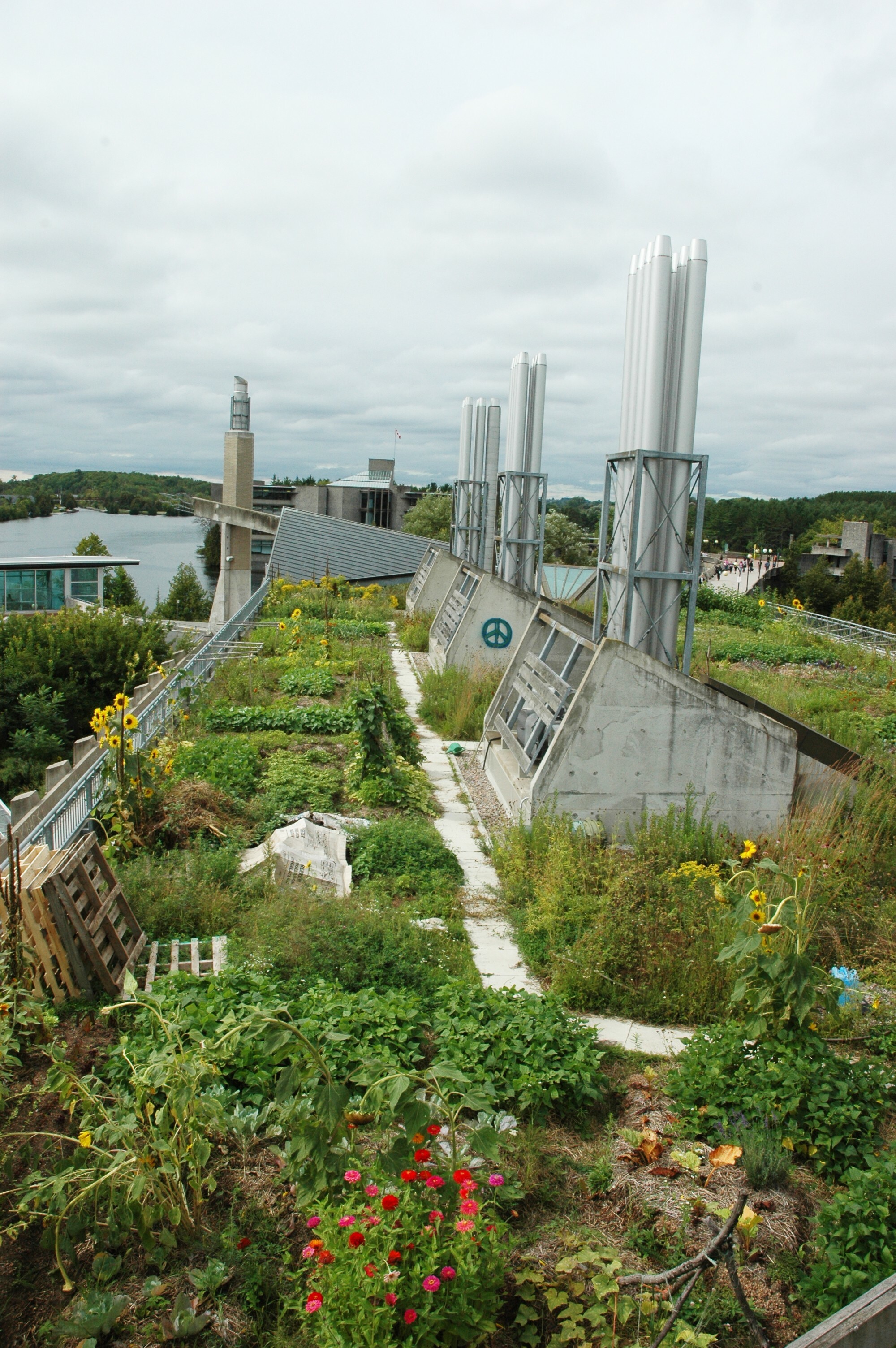 The leader of ZinCo, Jeremy Wright, was inspired to pursue his profession in this company because he feels passionate about sustainability, loves making green spaces, and feels great satisfaction in this work. His passion for sustainability began in university when he shifted his focus from finance and accounting to environmental economics. He took courses with the focus on sustainability, and he realized that sustainability is super important, now and forever. He knew that working with a sustainable company was the right thing to do, and with his past job as a cottage construction worker, constructing green roofs was perfect for him. He also developed a drive for entrepreneurship which made him aspire and reach a lead position at ZinCo. Seeing how his hard work pays off is a great motivator for him to continue investing in this career. Jeremy quotes “what makes me really happy is seeing the green spaces I’ve created.” The green roofs have numerous benefits to the environment, society, and people, including a cooler climate, less polluted air, and lower heating and cooling costs. He also enjoys working with plants and strongly feels that “people just need to work with plants more.” Also, as a former rugby player, he is very competitive, so making these green roofs sustainable and designed to fit any space offer him great challenges to, as he describes, “win with purpose.” He enjoys working with a team and was fortunate to have his former rugby teammates join him in working at ZinCo. He believes that “enjoyment of life is the priority” and therefore enjoys the work he is doing.

The overall impact of Zinco's Green Roof can be described in a short term and long-term perspective. Some of the short-term environmental effects of the green roof are the decrease of cooling bills since the roofs are proven to cool the air, meaning fewer cooling bills in the summer. Another short-term effect is the creation of habitats for insects during the summer, this is important because these are locations that are generally not habitable due to lack of nature space. One of the final short-term effects was the reuse of plant seeds in the Green Roofs, this is another example of short-term sustainability of the innovation. The long-term effects outweigh the short term, but like Jeremey mentioned in the interview; sustainability is a problem of the future that needs to be addressed now. With climate change, green space loss, and growing population being problems of the future, Zinco has many positive solutions to address these. A long-term goal is to implement native Ontario plant species back into the environment by including them in the green space with hopes the seeds spread into other green spaces. The most impressive long-term effect we discovered was the development of Smart Roofs and Microgrids. These are not yet in place but are expected in the coming years. Smart Roofs are roofs that will be measuring your soil moisture content and plant biomass growth, which calculates how much water stored in the sub media drainage layers and how much water is being used. This provides statistics that show how well your green roof is functioning. The most impressive technology I found to be was the MicroGrids, these are basically small solar panels that are kept in the green roof that collect energy that can power appliances in the home, suggesting that you would not need to pay for the utilities for that appliance. These types of short- and long-term effects are all positive outcomes of the innovation.

With all the tremendous work ZinCo Canada has provided, the continuous success the company sees is no wonder. Each year the company advances its performances and expands through collaborations. While interviewing Jeremy Wright, we were fortunate enough of getting details of their plans of working with World Wildlife Foundation. They plan to collaborate on planting seed orchards, which involves planting a green roof and harvesting the seeds of that green roof to utilize them in the making of the next green roof. This will ultimately massively cut down the costs of building green roofs for ZinCo.

Equally as innovative, ZinCo has another project developing with the use of sponge microgrids. Wright explained these microgrids as a combination of green roofs and solar to generate energy towards one specific ‘energy sucker’. They begin by questioning where the most energy is consumed in a building, typically furnace or fridge. These grids are then tailored toward providing energy for that specific appliance. The ultimate goal is to cut that energy cost out of the consumer’s bills and bring independency to energy. Wright believes over the next few years we will see a gradual switch from fossil fuels to renewables. The use of these micro grids is only a fraction of what the future holds and allows ZinCo to work ahead of the transition and competitors.

Along with the exciting work ahead for ZinCo, Wright credited much of the success in capitalism to sustainability, resilience, and retention, saying “capitalism is not as resilient as it is with or without sustainability.” A great example was the company’s use of recyclable products. When business performances rely on raw materials, not only is it more costly for the business, less sustainable for the environment, but also the reliability aspect is narrowed. Whereas, for ZinCo, the use of waste products causes sustainability and resiliency. While, ZinCo does have few employees, all these aspects combined caused for excellent employee retention. Wright calls it, “Winning with purpose;” the idea of being rewarded for your job, knowing you’re doing good for the world.

ZinCo’s Green roofs have many prominent benefits for both society and the environment such as carbon sequestration. Carbon sequestration is the amount of carbon the plants in the green roofs will uptake and subsequently evaporate into the atmosphere. ZinCo sequesters more carbon than most of its competitors in the industry due to its use of real soil. Many green roof companies use a soilless system that does a very poor job of sequestering carbon. Thus, with ZinCo using deeper soil depths and bigger plants, they also have substantially larger ground biomass which in turn results in more carbon sequestration. ZinCo’s green roofs can also manage stormwater exceptionally through its unique system that lies underneath its soil bed. Stormwater management is the ability to capture rainfall, store it, and positively release it into the environment. Furthermore, ZinCo’s green roof system lets the plants make use of the excess water and subsequently evapo-transpire it into the atmosphere. The ambient air temperature of the water then creates a cooling effect over that urban centre. Implementing these features into their Green Roof systems allow ZinCo to demonstrate commitment to climate action.

ZinCo’s commitment to life on land is notable as their green roofs do a phenomenal job of bringing native Canadian plant species back into Canada by incorporating them throughout their Green Roofs. Many of the Green Roofs and gardens you see in Canada possess a lot of species that are not native to Canada. These species have migrated to Canada and are now considered native because they have been here so long. Habitat creation within these green roofs is also a prominent aspect of the environmental benefits of ZinCo’s Green Roofs. For example, ZinCo Green Roofs downtown that are almost 30 stories up in the air will often have an entire population of diverse insect species and even a family of birds. A lot of competitors' green roofs tend to become more static over time and with a lack of proper maintenance become green waste on top of a building whereas ZinCo’s green roofs have efficient stormwater management, bring native species to an urban area, and are a usable green space for people due to the type of plants they use that don’t require a significant amount of maintenance.

Another important environmental factor is thermal bridging, which is the amount of energy that is being transferred out of the building through a penetration that is releasing energy into the atmosphere. Many of the buildings that are being designed as “green” have energy penetrations through their roofs and these buildings that are spending a tremendous amount of money producing energy for this building are losing most of it. Thus, building a Green Roof does a sufficient job of holding in that energy. The manufacturing process of green roofs has been seen as unsustainable in previous years. ZinCo was aware of this issue and decided to start using sugarcane and hemp plastics which is a very carbon-positive plastic. All materials that ZinCo uses are recycled products that are made from meted-down water bottles. ZinCo also uses recycled brick from demolished buildings and incorporates it into its growing media.

From a societal aspect, many people don’t respond well to a concrete environment with absolutely no vegetation and wildlife. When ZinCo implements these “active” roofs, people can grow vegetables and sit under a tree in the middle of downtown Toronto. Furthermore, from a psychological standpoint, it is essential that people are engaged with nature and plants to reduce various types of mental illness. These greenroof systems allow for sustainability within cities and communities that lack natural life, available green space, and ecological diversity.

ZinCo Canada is a Hamilton-based subsidiary of ZinCo International – a company that develops and distributes Green Roof systems. ZinCo Canada uses their knowledge in biomatter and sustainable design to create Green Roofs that foster biomass in the form of plant, shrubs and ground cover, and uses recycled plastics to create the fittings for their products.