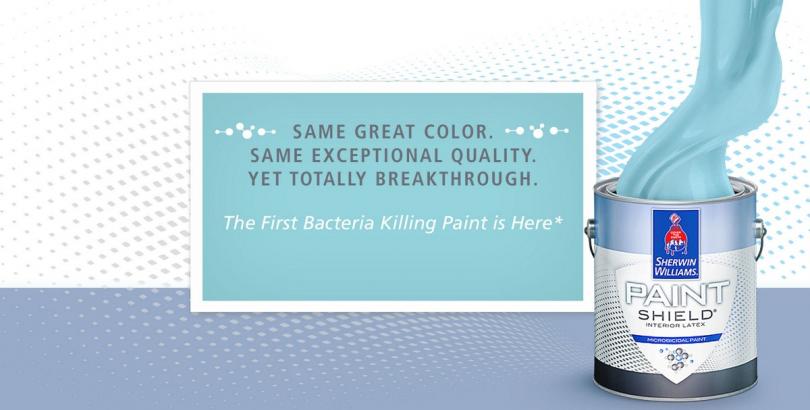 Paint Shield is an innovation by Sherwin-Williams that helps to reduce the spread of infectious diseases by killing 99.9% of bacteria, including Staph, MRSA, E. coli, VRE, and Enterobacter Aerogenes within two hours of contact with the painted surface. Sherwin-Williams is a global manufacturer of paints and coatings and is headquartered in Cleveland, Ohio.

Paint Shield is the first product of its kind on the market. Considered to be a revolutionary product, Paint Shield is the only EPA-registered product that, within two hours of contact, kills 99.9% of bacteria, including Staph, E. coli, MRSA, VRE, and Enterobacter Aerogenes. This is done with the suspension of quaternary ammonium compounds in the paint. The effects of these compounds have been known for some time, but Sherwin-Williams is the first to figure out how to integrate them into a paint. The result – a paint that is able to kill bacteria for up to four years.

Originally, Paint Shield was developed for the healthcare community with the goal of reducing the effects of healthcare associated infections (HAIs), which, according to the Centers for Disease Control, result in about 1.7 million infections, 99,000 deaths, and $20 billion in healthcare costs per year. However, since the product's release in late 2015 by Sherwin-Williams, it has also been used in other public areas, such as sporting facilities, schools, and airports, where there is the risk of disease transmission. 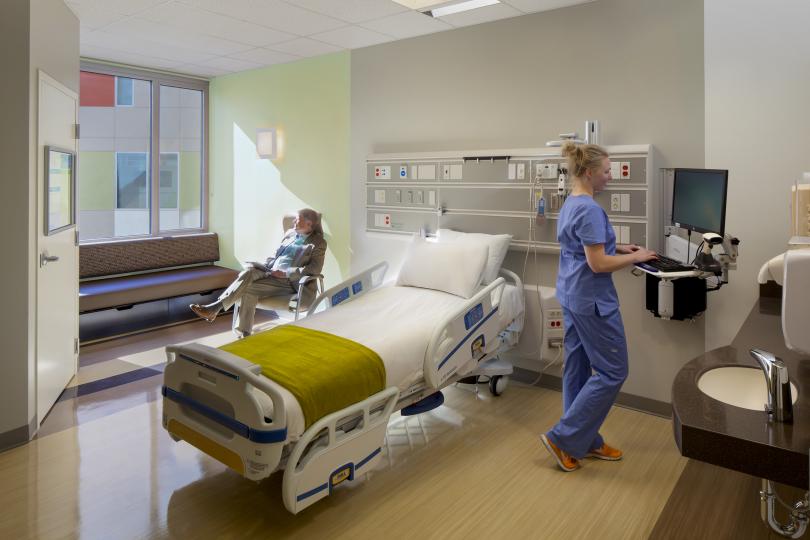 From paints that meet the most stringent VOC regulations to containers that use sustainable materials, the innovations created by Sherwin-Williams address the greater good. When asked about the roles that market growth, social and environmental responsibility, and corporate leadership in sustainability play in the development of new products, Nancy Rodeno, former vice president of Corporate Engagement, replied, “I don’t think you can separate those and be successful.” Sherwin-Williams is always looking for the next product to help solve the needs of its customers.

Regarding the inspiration for Paint Shield, Steve Revnew, vice president of Product Development, explained that Sherwin-Williams “worked with some of the leaders in Infectious Control, professors in biology that focus on Infectious Control, and hospital managers” to determine the needs of the healthcare community. The goal for the creation of Paint Shield was to help deliver a solution for hospitals to provide better care by reducing the risk of healthcare associated infections.

According to the CDC, about 5-10% of patients admitted into a hospital contract a healthcare-associated infection. Not only can this cause issues for the hospital in treating the infection, but in many cases health insurers will not cover the cost of treating the infection if they can prove that the infection is hospital-acquired, leaving the costs to the hospital. Paint Shield, in the healthcare setting, makes it possible for hospitals to mitigate these expenses while providing a safe environment for patients to recover. Outside of the healthcare industry, Paint Shield is being used in public places, such as sports facilities and airports, to reduce the transmission of bacteria among spectators, athletes, and travelers.

Where Paint Shield is used the risk of transmission of bacteria, including Staph, E. coli, MRSA, VRE, and Enterobacter Aerogenes, is reduced. Not only is this reducing the risk of the spread of communicable diseases in hospitals but in sporting arenas and airports as well. Currently, the product is primarily being used in the United States; however, it could provide benefits elsewhere around the globe. Further, the use of Paint Shield in airports and hospitals around the world could help to prevent the spread of disease not only within each country but between them as well.

Formed in 1866, Sherwin-Williams has strived to be a reputable supplier of quality paints and coatings. Having grown from their small one story shop in North East Ohio, Sherwin-Williams paints now cover iconic structures such as the White House, the Hollywood sign, and the Golden Gate Bridge. Despite its growth, the company has been able to retain its drive for reputation and quality and has created a number of products, from 0 VOC paints to sustainable containers, that aim to do good in the world.