Paramo Snacks produces organic and healthy snacks from Colombian agricultural products. This company obtains its feedstock at fair prices from environmentally friendly crops grown by small producers, mostly female farmers, who are organized under an association named ASOARCE. Likewise, Paramo Snacks invests 2% of its income in plans for the reforestation of forests and the preservation of moorlands.

Paramo Snacks manufactures organic and oil-free snacks from Colombian agricultural products. These products are obtained in a responsible and sustainable way, as the direct suppliers are small producers (mostly female farmers) organized in an association named ASOARCE (Association of Agroecological Producers of the Arce Swamp), which is a group trained in the conscious use of land and crops.

According to Margarita Cabal, the co-founding partner of Paramo Snacks, this innovation is the purpose of the company's creation, “after 6 years of understanding the problems of the rural parts of Colombia, from the beginning of the company, the innovation constitutes the company as such." In addition, Paramo Snacks invests 2% of its total income in cloud forest reforestation plans, processes of reconversion of soils degraded by extensive cattle ranching, and in protection strategies for the preservation of the moorlands of Colombia.

These strategies were developed to obtain feedstock and to make a responsible economic investment. Two of the founders had the desire to support small producers after learning about ASOARCE's sustainable planting dynamics. In Margarita's words, they wanted the company “working with environmentally friendly suppliers.” Marta Serna and Margarita Cabal contacted ASOARCE to generate an agreement that would establish this association as the main suppliers of Paramo Snacks, while Juan Carlos Florez dedicated himself to finding a way to produce completely oil-free snacks. Although at first it was quite difficult, these strategies continue to be successfully executed to this day under the direction of the three founders, Margarita Cabal, Marta Serna, and Juan Carlos Florez. 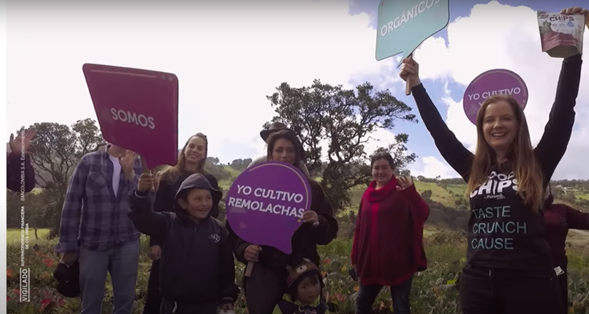 Margarita Cabal (first person from left to right), co-founder of Paramo Snacks, alongside the small producers of ASOARCE

Margarita had already known about the work dynamics of ASOARCE for more than 6 years when it was decided that this community would be the best option of suppliers for Paramo Snacks. In addition to the support that small producers would receive with this link formed between ASOARCE and Paramo Snacks, plans for the conservation of the environment and Colombian ecosystems would also be promoted.

After the decision was made, the chemical engineer Juan Carlos Florez joined the project. He took the initiative to develop a completely oil-free snack line as an alternative to Margarita's original idea to ​​launch a line of potato chips, since he was sure that the production of fried snacks contradicted the ideals of organic and natural food that the company wanted to preach. This is how these three people founded the Paramo Snacks company at the end of 2018, which, despite going through many difficulties, remains firm in the purpose of supporting small producers in the Colombian countryside and manufacturing delicious, healthy, and eco-friendly snacks.

Paramo Snacks' production strategies are based on the responsible use of the natural resources and the inclusion of vulnerable groups, since, as Margarita tells us, “supporting small producers has always been the central point [of the company] ”. Therefore, Paramo Snacks contributes directly to the reduction of poverty and gender equality included in the first and fifth SDGs respectively. The company ensures farmers, mostly women, have an ability to directly purchase at fair prices. Before the creation ASOARCE, these farmers did not have the ability to find a decently paid job due to the lack of recognition that rural women have in the Colombian countryside.

Since its foundation, Paramo Snacks has made sure to obtain most of its feedstock from farmers trained in eco-friendly crops, which, in the words of Margarita: “proves that it is possible to produce while being friendly with the environment.” Currently, it supports reforestation plans in cloud forests to create biological corridors, and is committed to the preservation of life in terrestrial ecosystems expressed in the fifteenth SDG. In addition, it invests 2% of its income to plans protecting the moorlands, which are ecosystems that are vital in the fight against climate change mentioned in the thirteenth SDG. Along with cloud forests, these ecosystems capture the most carbon dioxide and are responsible for producing fresh water for millions of Colombians. This company also supports strategies for the reconversion of soils affected by extensive livestock farming and potato monocultures with the diversification of seeds to, according to Margarita, "change the way food is accessed," and in this way, guarantee equal access to a healthy and environmentally responsible diet mentioned in the second SDG.

To this day, this company, along with other environmental entities and ASOARCE, has contributed to the planting of more than 22,000 native trees in the Páramo de Arce area and has supported 22 families of small producers. In addition, this company hopes to generate strategies that include victims of the Colombian armed conflict in the company's value chain. According to Margarita, these evidences are proof that innovation is "the engine of growth of the company, we are a company of innovation and impact."

Paramo Snacks went through a very difficult economic situation in 2020 due to the pandemic crisis. However, they found a way to move forward and continue their work by always guided by solidarity with the environment and with small producers. This is why they have been recognized with various economic prizes from different organizations: FedEx, Chivas Venture, Bancolombia Foundation, Impulsa and Government of Cundinamarca.

In addition, in 2020, Paramo Snacks was awarded with the “Colombia Product of the Year” award for its innovative chips. In Margarita's words, these recognitions show that Paramo Snacks has “a winning product, an inspiring purpose and a very competitive and unique concept.” This organization has the support of environmental authorities, such as CAR Cundinamarca and the Secretary of the Environment of Cundinamarca.

Paramo Snacks financially supports small producers in the reconversion of areas degraded by polluting monocultures and extensive livestock through "models with sustainable, organic, and certified production with diversification of crops and the active planting of native trees," says Margarita. To date, more than 22,000 native trees have been planted in the Páramo de Arce area. These trees establish biological corridors that preserve the richness of Colombia's great ecosystem, help reduce the carbon footprint, and contribute to the reversal of climate change.

In the future, Paramo Snacks plans to develop a strategy to include victims of the Colombian armed conflict in the company's production chain.

Paramo Snacks is a business that produces healthy and organic snacks that are 100% oil-free. For their production, Paramo Snacks uses raw materials obtained from small producers at fair prices. They also invest a percentage of their profit in reforestation plans.