The orange maraca is a great example of Colombian innovation, because it combines the creativity, ingenuity, art, talent and cultural heritage of the luthier masters with a new source of raw material, taking advantage of the tropics' orange peel, guaranteeing the properties of sound and durability that substituted raw materials such as plastic causing the loss of ancestral traditions in the production and elaboration of handmade musical instruments.

Tempo Musical contributes to the reconstitution of the social structure and inclusion, by means of the development of the artisanal activity, framing its contribution in new opportunities of decent and equitable work through the development of local capacities and generation of new sources of income that make reference to SDGs 1 and 2; recognition of the contribution of women in the manufacture of musical instruments, specifically in esthetics and finishing - SDG 5, creation and configuration of networks in the production value chain, avoiding intermediaries - SDGs 8 and 9; greater economic opportunities, expansion of knowledge and revitalization of the heritage of the communities pointing to SDG 10. Finally, the “production of a maraca with renewable and recyclable raw materials and with the knowledge of the origin of these raw materials, allows us to offer a responsible product to the market, and an alternative consumer alternative for consumer” - SDG 12.

The innovation of this musical instrument goes in three lines:

· Innovation in raw materials: using raw materials from renewable resources, this instrument conjugated wood plantation for the wooden handle, the peel of the orange treated for its durability and with natural finishes of beeswax and natural oils, the natural fiber for using indigenous fabric of the Cumare palm of indigenous communities of Vaupés and the "chocho" seeds of forests in the Amazon region.

· Social innovation: through the rescue of the traditions of the communities and in alliance with “Coja Oficio” Foundation, the maintenance and reinforcement of handicrafts in the communities in young and adult generations is promoted.

· Technological and esthetic innovation: to make the product much more efficient in terms of the use of raw material, sonority, durability and esthetics, seeking to comply with the principle that Jorge mentions with conviction: "Everyone has the possibility of making music." 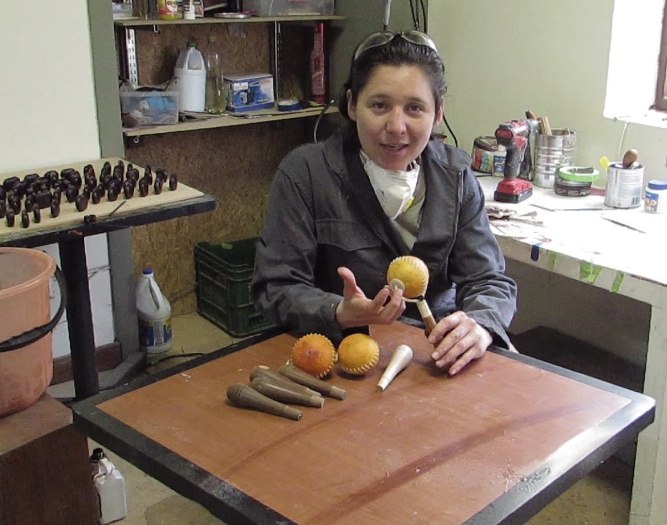 This idea arises from the collective work of the luthier teachers Milton Arce, Jairo Pulchucán, Jorge Enrique Rodríguez and the apprentice Liz Amaya, who saw how the instruments that are being built more and more with elements such as plastic, losing the cultural value of handmade and the relationship with nature.

In this regard, Jorge Enrique comments that one of the inspiring reasons to create new instruments from wood and its derivatives was found in the philosopher Roland Barthes, who in the mid-twentieth century highlighted the transformation that objects have undergone in mass culture every day, replacing wood and totumo (plant) as raw material with plastic. "Barthes said that plastic shows an appearance that extinguishes pleasure, softness, humanity of touch."

Rarely does wood break, rather it is spent. It can last and live a long time with whoever owns it, gradually modifying the relationships of the object and the hand. Wood makes essential objects, perennial objects. And that is one of the purposes of the orange maraca: Make the perishable perennial. Therefore, they were given the task of experiencing the combination of wood with various fruits, until they reached the eye-catchin, aroma and texture of orange.

After trial and error, the teachers relied on designers from the Javeriana University to obtain the product. The biggest challenge was the preservation of the orange peel, but, “the passion and love for music, as well as the promoting the ancestral craft of musical instruments, also accompanying it with new forms and materials to reach more people in the world with the message of the musicality of the human being was the engine to achieve the instrument,” said Jorge.

“This instrument does not arise from precariousness but from the creativity of our teachers,” says Jorge Enrique, proud to support the conservation of cultural heritage and the innovation of instruments with the premise that “musical instruments do not have to be only for musicians, are part of the lives of all people.”

To make known the culture of the country throughout the world by the instruments that are marketed carrying the musical joy that inspires human beings to see things from a different perspective, share part of the culture that makes us see before the rest of the world as a cheerful, innovative and optimistic people. "The orange maraca is a symbol of innovation and how the ephemeral can become perdurable."

Additionally, the networking model with the communities that provide raw materials such as the fiber used in the fabric and the seeds, can be reproduced in other fields of the cultural industry, recognizing the great importance of this relationship and that the economic remuneration that those communities can reach.

The biggest advantage identified is “to make known the Luthiers Colombianos brand internationally, since the orange maraca is a product very desired by foreigners, who have a different shopping experience since when they go to the store, they know the whole story of creation of the instrument, of the origin of the raw material and can be replicated wherever they go.”

Aesthetically it is a very beautiful product, with all the handmade finishes and a different fabric that makes each product unique. Of course they have the same or even higher sound quality than the instruments produced with other materials.

The market identified for this product is the tourists' one, so the company focuses its marketing operations on tourist areas headed by the city of Cartagena and Bogotá, where people who visit the three stores resemble the product to a sample of folklore and Colombian joy. The sale value is between USD 25 and 30 per unit, generating a 20% profit margin.

The initiative has been developing since 2016, and for six months enough level of production has been reached to supply the market. Annually, the income from the production and sale of this product can reach USD 25,000. The company has commercial export expectations, destined for Switzerland and the United States and “through the Luthiers Colombianos brand an international agreement has been signed with the Mount Royal University of Canada to carry out market studies for the positioning of instruments (including the maraca of orange) in 10 regions of the world.”

The benefits identified are:

Rescue of the culture and traditions around the construction of handmade musical instruments, including populations of the department of Vaupés in the Colombian Amazon, since they are the suppliers of the fiber with which the maraca fabric is made and the necessary seeds. Seven families from the Uitoto community in Chorreras, Amazon region, participate in this project.

Generation of income for the communities affiliated with this trade, each family for the elaboration of an instrument receives an approximate value of 6 USD. This means improvement of their living conditions and the maintenance of the forest as a source of raw material. Five families of luthiers are involved in the production of the instrument.

The use of plantation-based woods relieves pressure on natural forests and limits the consumption of plastics by a recyclable raw material. The use of this material produces an effect of forest conservation and reduction of deforestation practices.

The change of material for the maracas of orange from plastic in the elaboration of the instrument and protects the use of “totumo” as the only raw material with similar sound qualities. "This instrument has the potential to bring all people in the world closer to musicality and the benefits it offers in health and well-being," says Jorge Enrique. 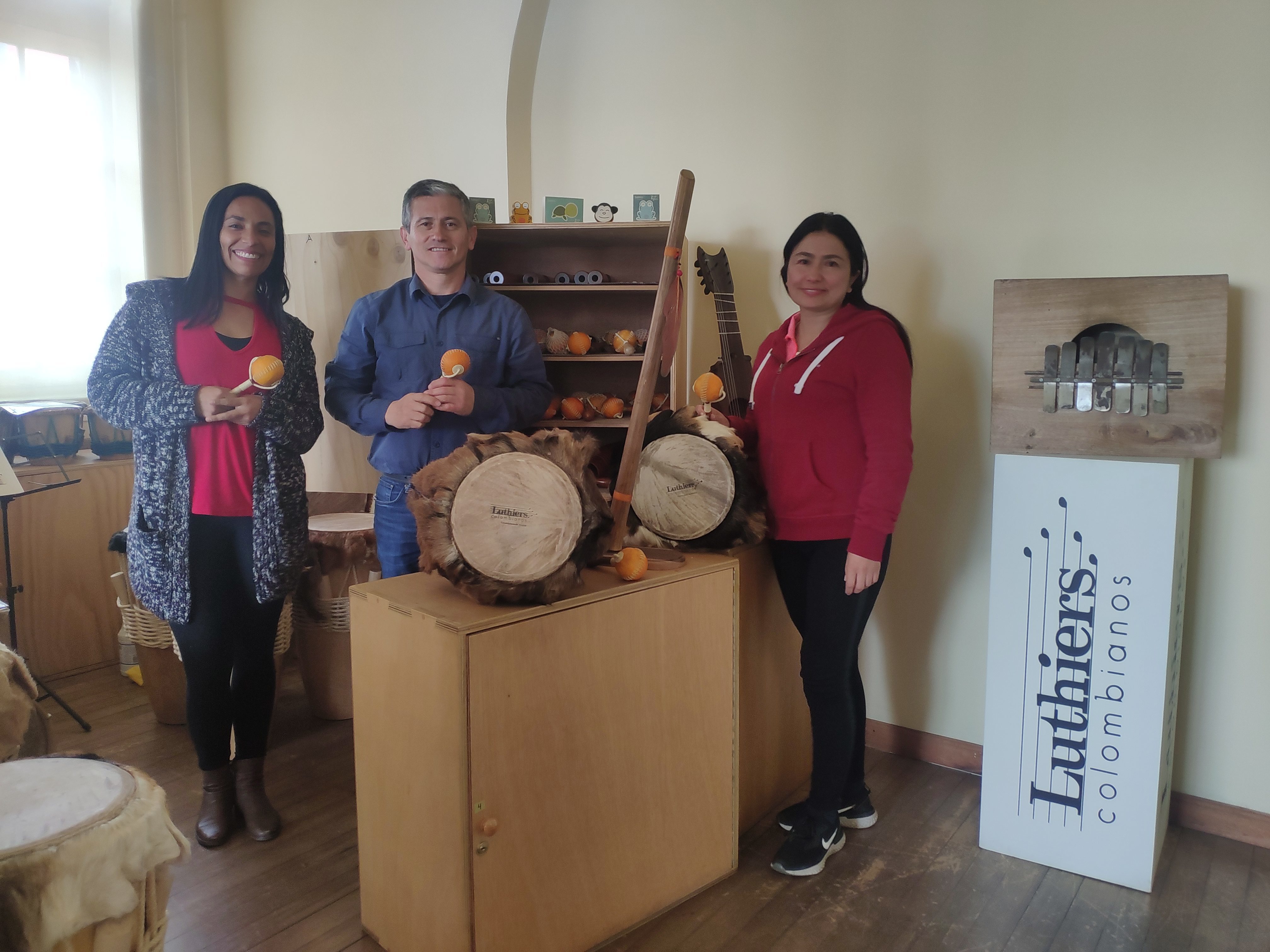 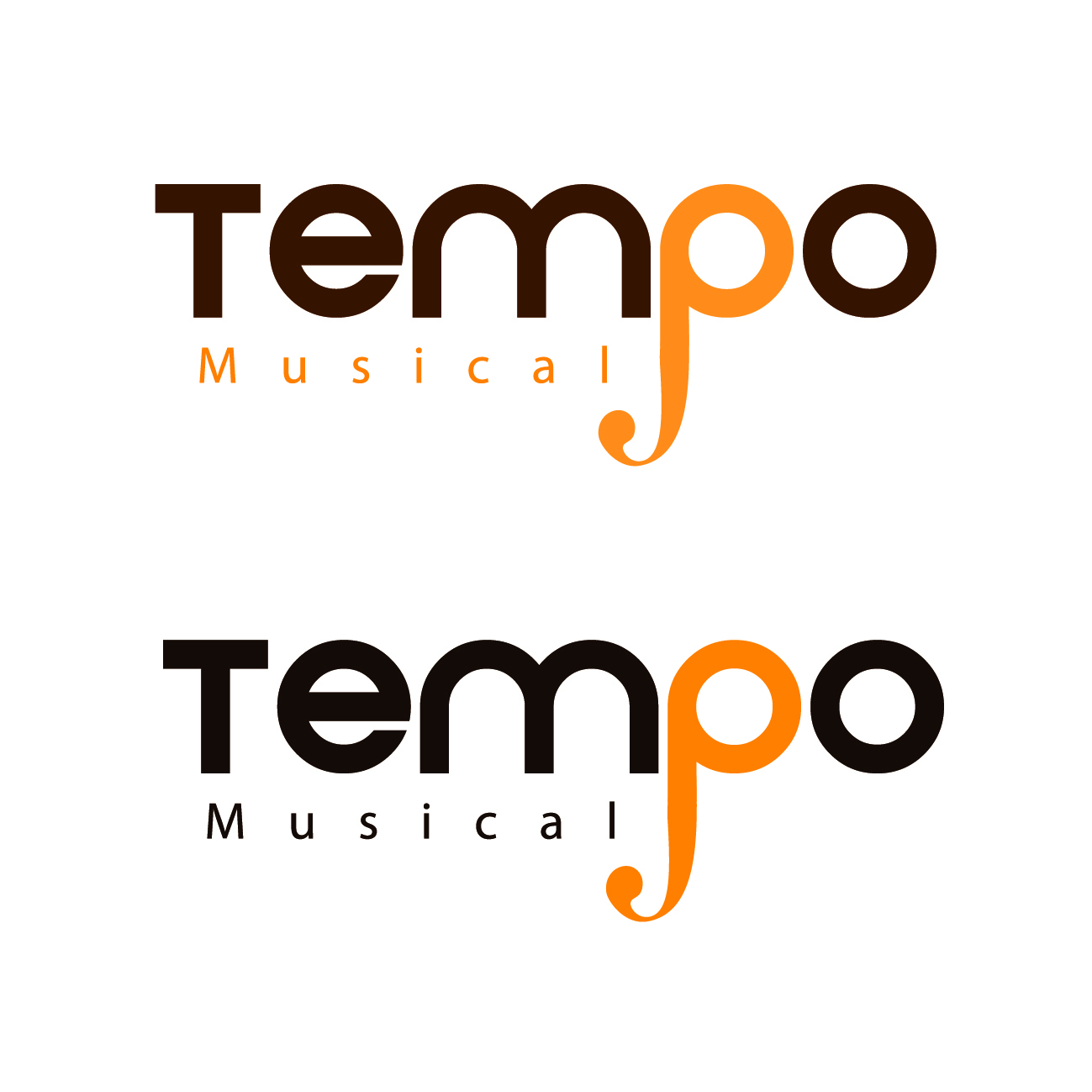 Tempo Musical is a company dedicated to the production of musical instruments and their promotion in new markets, which is part of Luthiers Colombianos, constructores de musica -music builders-, distinctive brand for the promotion of instrument builders’ ventures, so they present their products nationally and worldwide. The musical products are made by luthier teachers and artisans in training, with the support of “Coja Oficio” Foundation.

The shared objective of these three organizations is to revitalize and maintain the traditional profession of luthiers, to rescue the musical culture of the country and through a commercial structure, to allow artisans to have greater business opportunities and to generate an economic benefit to the community by creating spaces for sharing and maintaining the cultural and ancestral heritage of each town.

Innovation in musical instruments focuses on three ways: technological innovation in manufacturing, use of different raw materials and social innovation through the creation of sustainable productive opportunities that, in turn with emphasis in the social fabric, support the new generations in the preservation of their traditions and family ties, and equity and preservation of the country's cultural heritage.