This is a story of 7 dedicated women who proved that you don't need a good financial backup to build an empire in the corporate world. All you need is skills and dedication. It's a dream seen by 7 women to give employment to as many women as they can. Today there are over 43000 people working with them, happily. Their sales turnover is over 100 million. They started this corporation with just INR 80 (1.13 USD) and today they're here.

This organization shows us that dedication, teamwork and consistency can help you do anything and everything.

The women borrowed Rs 80 from Chhaganlal Karamsi Parekh, a member of the Servants of India Society and a social worker. They took over a loss-making papad (thin, crisp disc-shaped food) making venture by one Laxmidasbhai, and bought the necessary ingredients and the basic infrastructure required to manufacture papads. On 15 March 1959, they gathered on the terrace of their building and started with the production of 4 packets of papads. They started selling the papads to a known merchant in Bhuleshwar. From the beginning, the women had decided that they would not approach anyone for donations or help, even if the organisation incurred losses.

Initially, the women were making two different qualities of papads, to sell the inferior one at a cheaper rate. Later, they were advised to make a standard papad and askednever to compromise on quality. They were advised the importance of running it as a business enterprise and maintaining proper accounts.

Lijjat expanded as a cooperative system. Initially, even younger girls could join, but later eighteen was fixed as the minimum age of entry. Within three months there were about 25 women making papads. Soon the women bought some equipment for the business, like utensils, cupboards, stoves, etc. In the first year, the organisation's annual sales were Rs. 6196. The broken papads were distributed among neighbors.

Like any other businesses, they had to deal with a lot of problems. Rain was one of the major problems because the papads get spoiled if water/moisture comes in contact. They came up with solutions to deal with every problem on their own.

The women's group got considerable publicity through word of mouth and articles in vernacular newspapers. This publicity helped them increase their membership. By the second year of its formation, 100 to 150 women had joined the group, and by the end of the third year it had more than 300 members. By this time, the terrace of seven founders could no longer accommodate the members and the ingredients, so the kneaded flour was distributed among the members who would take it to their homes and make papads. The papads were brought back for weighing and packaging.

They slowly started expanding nationally. They even registered themselves as a society under the Societies Registration Act 1860. Soon, KVIC formally recognized Lijjat as a unit belonging to the "processing of cereals and pulses industry group" under the Khadi and Village Industries Act. It was also recognized as a "village industry". In 1966, KVIC granted it a working capital of Rs. 800,000 (0.8 million) and was allowed certain tax exemptions. 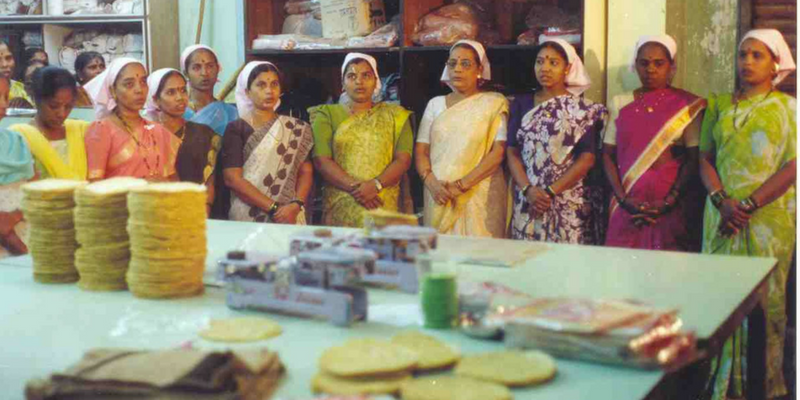 The main inspiration behind starting this business was a dream. A dream to stand out, a dream to break the stereotype that the business is not for women. A journey from being just a small women's group to make homely baked papads to becoming one of the biggest organization in this industry to produce papads; they went through a lot.

The overall impact of this organization can easily be traced today. Women who know how to cook are no more just house wives, but an entrepreneur as well. Shri mahila griha udyog lijjat papad created a direct employment for over 43000 women working with them on a daily basis. Indirectly, they've hit impact on so many lives enormously. Their distribution channels, their sales and marketing network has expanded and are spread globally.

They not just created jobs for them who are working for them, but also motivated thousands of women to change their passion of cooking into a business. As a result, there are thousands of women working from home, cooking and sending the tiffins to places and making good money.

The business benefits can be seen looking at the investment. If you have skills and talent to do something, the amount of investment doesn't matter.

The direct impact on over 43000 employees and their livelihood can be seen here. It's exported to over 25 countries and every year their sales turnover increases significantly.

This innovation helped women to be in their comfort zone and work for living, in their free time. Most of the women in this part of the world were housewives. They never worked to earn thinking that they lack knowledge and skills. This organization helped all the women, out here, to break the stereotype and get employed so that they can earn for their livelihood and create an impact on the society.

The Institution, over the years, has paved the way for women to become self-reliant and self-confident. Lijjat has provided them the right platform to improve their status in society.

India is a developing Nation. Everyone in this part of world wants to grow up and get a good job so that they can live a happy life thereafter. In a country, where everyone wants to work, there are these seven women from Bombay who thought of creating a job. A platform where they can help others to get a job for their livelihood.

Back then, women weren't exposed to the corporate world. they were restricted inside the home, doing their household works. This was the time to break the stereotype and these seven women knew how to do it. All they knew was how to cook and were unknown about any other jobs, and they turned their weakness into their strength. They started this women's corporation with INR 80 (1.13 USD) and started making papads (thin, crisp disc-shaped food). Slowly their business started growing and they started recruiting more women to work with them.

This innovative story is a journey of Indian women who started with 80 Rs and are now having annual turnover of 800 crore (over $109 million). This story depicts two important lessons to one and all;

1) Women can equally earn and run their family if given opportunity.

2) Nothing is impossible, whatever the market is, whoever is the target customer; when there's a will there's a way.