Not Your Typical Cafe

Through the assistance of two mechanics, who are former beneficiaries of the café, the project has developed into an enterprise where they develop a product that can be sold to the public with proceeds going to benefit the project.

Although the 1st Step café is indispensably central for those in the recovery community, it is through 1st Step Bikes where this social project is truly innovative. The structure of the scheme is as follows:

The backing of the project comes from a variety of sources. These include funding from the local council, The National Lottery, voluntary action fund, and perhaps most importantly through the sales of bicycles that have been restored. Funding can be problematic to obtain for social enterprises; therefore, it is essential the project forms partnerships to have assistance in various capacities. To this end, 1st Step Bikes has a unique partnership with Police Scotland, who provided an area which has since has been used as a work-space free of charge.

Ms Throp states that the most imperative part of the 1st step bike scheme is to break down the stigma between those recovering from addiction and the wider community. With people in the community volunteering their time and working on joint projects, the labels that may be attributed to different people disappear. 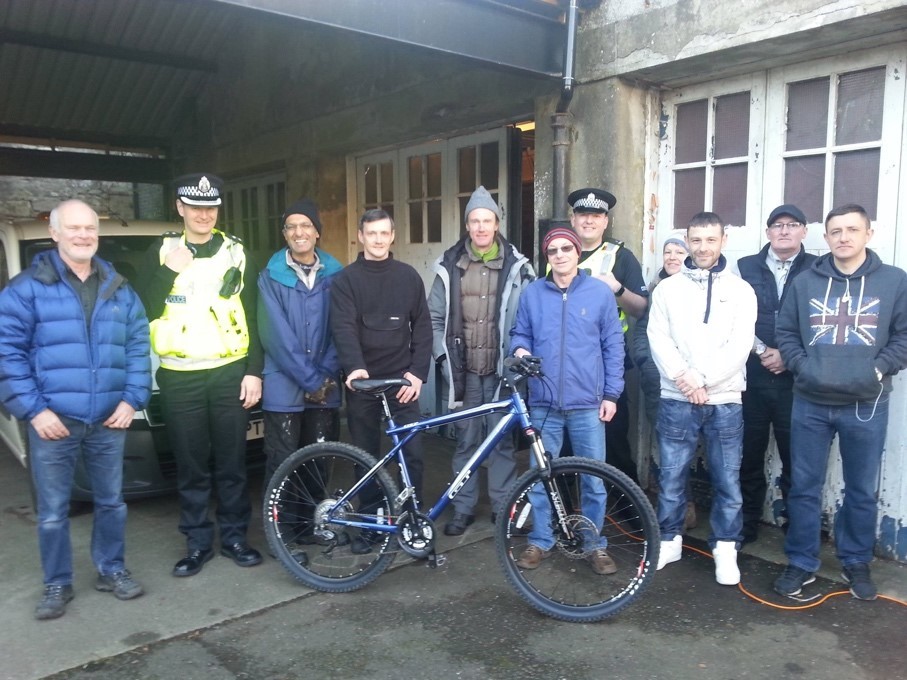 Ms Throp created a bike recycling enterprise up in the Highlands in 2013 and having tried and tested this process, when it came to the social enterprise in Linlithgow she was very experienced, allowing for a strong foundation to be set allowing the scheme to reach its maximum potential. Having been open for 18 months at the time Maria became involved, there were a number of individuals at the stage of their recovery where they were ready to seek employment/work experience opportunities. The bike scheme not only offers something to concentrate on, but also helps develop basic communication skills and a network of contacts, through the volunteer coordinators, who can help lead them to future employment. Ms Throp refers to this idea as building recovery capital.

With respect to the current economic climate, it is now harder than ever for those in society to gain access to employment. Therefore, for those suffering from addiction the challenge is even greater since they are leading chaotic lives and are much more demanding and high maintenance than those employers are looking to recruit. The bicycle scheme offers them a project where they can begin to build a routine and get into a much better position to consider work opportunities, as they are more reliable, focused, and approachable.

The fundamental aim of this scheme is progression. It has always been the case from the beginning that the café should not be a permanent place for those recovering, since the aim is to achieve full recovery and gain employment to re-establish a normal life again, with many successful stories so far.

The bike scheme now has its own college qualification at City and Guilds Level 3 (equivalent to HNC) at West Lothian College and two mechanics who were taken on as volunteers at the start of the scheme are now fully employed and are aiming to achieve accreditation for their college course.

The previous café manager who was one of the core individuals in founding the café three years ago now works for another charity called Cyrenians in Edinburgh. Employed as a manager exemplifying a real success story, going from the early stages of recovery to full employment in less than 3 years.

Determining whether the café has been a success in numeric value can be extremely difficult as there is no driving measurement. However, the most powerful evidence is shown through the community. Counselors and elected MPs frequently visit Linlithgow to give their assistance to the project. With regards to the bike scheme, a major contract has recently been signed to have the course running on a permanent 6-week loop with participants being interviewed at the beginning and the end to capture the true impact of the scheme, a development which is difficult to measure in the café.

In 2017, 1st Step Bikes won the Community Group of the Year award from Cycle UK, giving the scheme national publicity and recognition for the incredible effort that has been put in by all concerned to ensure its success.

There are a variety of business benefits which are connected with both the 1st Step Café and 1st Step Bikes. The most significant business value can be seen through the work of 1st Step Bikes as the individuals who participate in these courses gain an academic certificate through West Lothian collage, which can lead to full time employment and generate an income for both themselves as well as benefit the business, wider community, and Scottish economy as a whole.

Both the café and the bicycle scheme aim to be self-sufficient through the refurbishment and sales of bikes. The engagement from the wider community is another important benefit, as it breaks down the barriers surrounding the stigma of addiction and changes the perspective of the person recovering from being just inward looking and closed off from the rest of society to becoming a more confident and independent individual, which in turn could lead to life skills and business connections.

With respect to quantitative financial data provided by Ms Throp, 2018 has been described as their ‘take-off year’. As previously stated, the sources of finance received arrive from a variety of organizations. Notably, this year the social enterprise has received just under £20,000 from the West Lothian Council. Ms Throp and other individuals are continuously looking for different streams of revenue they can receive, with negotiations currently ongoing with the Big Lottery to boost sustainability over the next three years. However, the strategic goal is to develop the bicycle enterprise to a level in which sale revenues become much greater.

The group collaborates with many stakeholders in the wider community including volunteer coordinators, other charities such as Cyrenians and Signpost, West Lothian College, Police Scotland, and of course the general public who donate bikes which is essential to the success of the 1st Step Bikes project.

1st Step Café prides itself on a responsible outlook towards sustainability through their garden project. The project, which was set up in 2017, aims to provide further opportunities for those in recovery to develop horticultural skills, whilst promoting an environmentally beneficial way of growing food for the cafe's kitchen. This is a prime example of a business adhering to principles 7,8 and 9 of the United Nations Global Compact. The aim in 2018 for the garden is to successfully grow a variety of fruit and vegetables to be used in the cafe's kitchen which will then offer people another opportunity to gain cooking skills. 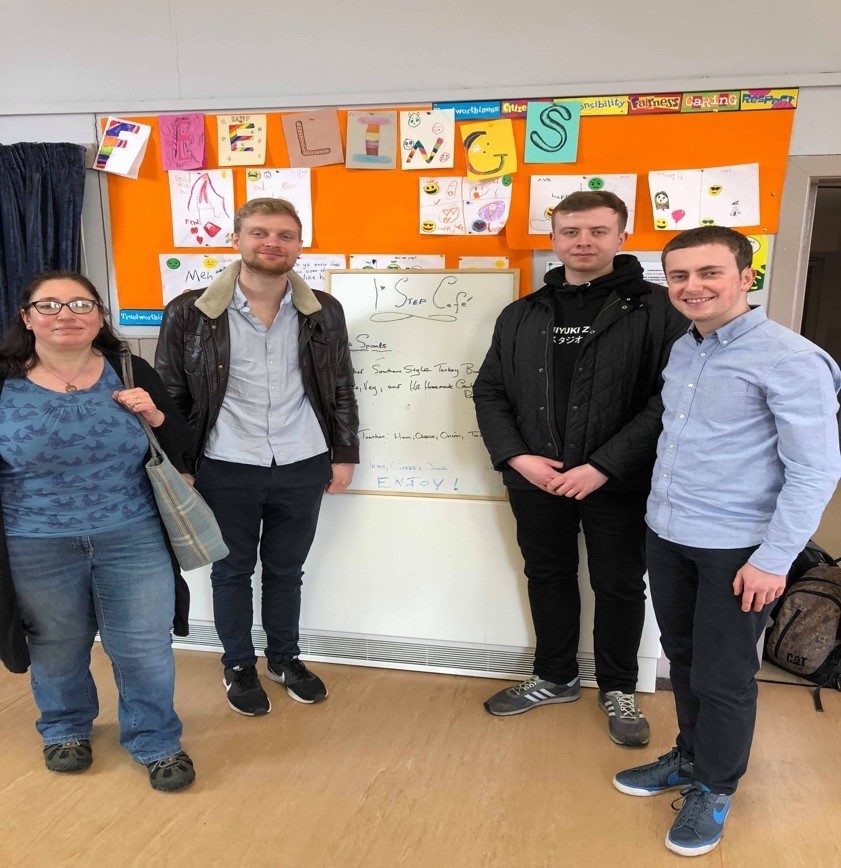 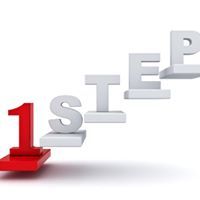 1st Step Café was founded in 2015 by Linlithgow’s community practice nurse Angie Robinson. The creation was the result of there being a severe lack of support for individuals situated in the surrounding areas suffering from addiction-based difficulties, such as alcoholism or drug abuse. Ms Robinson took it upon herself to tackle this issue. She formed 1st Step Café with the primary mission of providing a warming abode for beneficiaries who could meet in an open and friendly environment. To date, Ms Robinson has welcomed hundreds through the doors of the local Linlithgow church hall to share their experiences, guiding them on their road to recovery.

In addition, development manager Maria Throp later became involved in the social project as a result of interviewing Ms Robinson as part of her PhD program 18 months ago. Leaving extremely impressed with the positive atmosphere, Ms Throp chose to get more involved in the café. Furthermore, this additional involvement led to the formation of 1st Step Bikes, a social enterprise involving the refurbishment and sale of bicycles by those struggling with addiction issues. This additional social venture has so far been successful due to the expertise of Ms Throp, who has previous experience in building a bicycle social enterprise in the Highlands with a similar objective of providing an initiative that helps individuals get their lives back on track.