No Carbon Left Behind

LanzaTech’s carbon recycling innovation is rooted in biotechnology and uses organisms – like bacteria and microbes – and various wastes to create ethanol. This ethanol is converted into consumer products like jet fuel and plastics. LanzaTech’s innovation helps to achieve the UN Global Goals pertaining to clean energy, responsible consumption and production, and climate action.

The carbon recycling innovation began with a bacterium known as clostridium autoethanogenum, which is found in the gut of a rabbit. Simpson and Forster came across this bacterium and its capabilities after scouring many academic papers. Clostridium autoethanogenum is able to intake carbon monoxide and convert it into ethanol through a fermentation process. However, the first strain that LanzaTech ordered was essentially useless. It required expensive nutrients and minerals to survive and could only convert clean carbon monoxide gases into ethanol. Members of the team referred to it as “the diva of bacteria” for its high maintenance needs. Since carbon emissions from factories and mills are far from clean, LanzaTech had to find another way to make the bacteria work.

During this time, Freya Burton – now the Chief Sustainability Officer – joined the team as a lab analyst with a background in biology. She worked alongside Simpson and Forster to study and evolve the bacteria. Burton discussed the next steps in the process where she and her team “ran lots of little experiments by throwing cheap materials at the bacteria to see which strains would survive and thrive.” The bacteria would sit in mini reactors, about one liter in capacity, which held the fermentation while the team tracked changes and output. They repeated the experiments many times to determine whether the bacteria would actually produce the ethanol and do what they expected it to do. Burton and the team used data analytics to study the results of the experiments to see what was working and what was not. The idea was that whichever strains of the “diva” bacteria could make it past these rounds would be more promising when given real carbon emissions down the line. Eventually the team was able to develop an industrially robust strain of the bacteria that would eat the dirty, pollutant gases and convert them into ethanol.

Once the LanzaTech team was successful in identifying the right bacteria strain, they were able to scale up the fermentation process to be tested at a steel mill in New Zealand in 2008. The bacteria performed as expected by consuming the steel mill’s emissions and creating ethanol. This would be the first major step in LanzaTech’s ongoing journey to combat climate change. By recycling carbon, LanzaTech is promoting the UN goal of climate action to reduce the impact of emissions on the earth’s atmosphere. It also allows factories and manufacturing facilities to partake in the clean-up of their emissions to promote the UN goal of responsible consumption and production. Additionally, by using bacteria that eats and recycles waste, LanzaTech further supports this same goal. The ethanol the bacteria produces can also be mixed with kerosene to make jet fuel to offer a cleaner energy alternative, as the components are partially recycled. LanzaTech’s innovation in recycling carbon waste has multiple applications and great potential to help the planet. 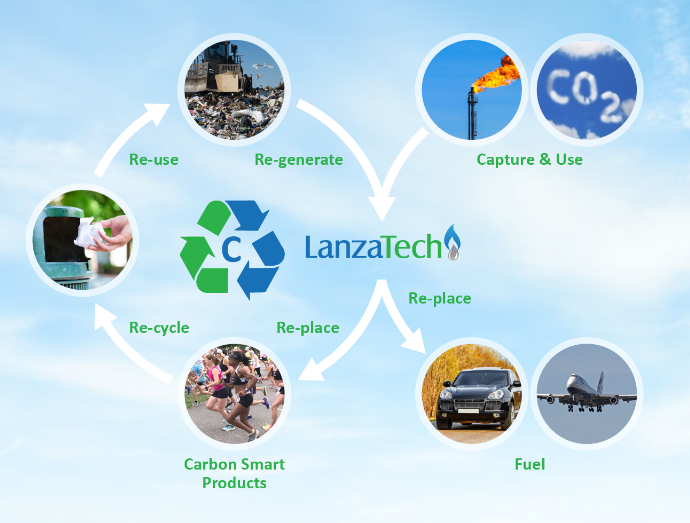 Prior to creating LanzaTech, co-founders Simpson and Forster worked at a biofuel company in New Zealand. After the biofuel company shut down, the two joined forces in 2005 in hopes that they could discover a new way to create fuel that did not rely on biomass or plants and therefore would ideally have no impact on food, land or biodiversity. Biomass methods used plants to extract the sugars and starches; however, that would negatively affect overall food production. Simpson and Forster wanted to avoid using a new material to create the fuel and looked to using waste instead. They also did not want to use land unnecessarily if there was a better method.

Simpson and Forster were both very aware of the dire situation the earth has been facing concerning pollution levels, particularly the carbon emissions crowding the atmosphere. Combining this awareness and their persistence to discover an alternative fuel creation, the duo dove into a search and stumbled upon the bacterium clostridium autoethanogenum. Running with this discovery, they developed the bacteria to achieve the desired effect and gain funding to reproduce the process on a commercial scale.

LanzaTech’s innovation was one of the first steps the co-founders took to be proactive in the fight against pollution and carbon emissions, with Burton noting “It is better that we do good now than wait for a miracle to happen at some point." According to him, they saw carbon "as an opportunity rather than a liability.” The conversion of carbon waste into goods is the opportunity to create CarbonSmart™ products, allowing consumers to actively decide where their products, packaging and ultimately their carbon comes from. Just as people today can choose locally sourced goods or recycled plastics, they would also be able to purchase goods made from recycled chemicals, polluting materials, and trash. It also initiates the possibility of infinitely recycling carbon; as the CarbonSmart™ products are disposed of, LanzaTech’s methods can be utilized repeatedly to recycle and reuse the materials.

The team at LanzaTech identified that the current world’s “biggest problem is carbon: an excess of carbon in all the wrong places.” They responded with the innovation that enables production and manufacturing companies to put their carbon waste to use and make the planet a cleaner place. Referring to the efforts made to combat climate change, Burton states, “we need to think differently, this will be part of the solution.”

Thus far, the overall impact of the innovation has been positive. Only having been around for fifteen years, LanzaTech is still in the beginning of its life as a company. However, during these fifteen years, LanzaTech has shown what its team is capable of and continues to grow at a rapid pace. In 2009, the company set up its first demonstration plant at a steel mill in China to display the full abilities of its discovery with the bacteria. A second demonstration plant was set up in 2011 in China related to the applications of LanzaTech’s waste-based ethanol in the aviation sector with jet fuel. The company was proving its potential and in 2016, construction began for the groundbreaking commercial plant in China. This plant would hold a permanent instalment of LanzaTech’s bacteria fermentation process. By early 2018, it was up and running and has had two years of successful production since. From the first venture into China to creating the first commercial plant, only nine years went by, emphasizing LanzaTech’s ability to adapt and apply their findings efficiently and effectively.

As the first plant has only been live for two years, the short-term effects are happening as we speak. These effects have been promising and impactful. Thus far, LanzaTech’s commercial plant has produced 12 million gallons of ethanol by recycling the polluted plant emissions. That resulted in the elimination of over 70 thousand tons of carbon dioxide from the atmosphere or the equivalent of taking 50 thousand cars off the road each year. Additionally, in 2018, LanzaTech was able to get approval from the Department of Energy to use their jet fuel in commercial aircrafts. In October of 2018, Simpson, Burton and the LanzaTech CEO Jennifer Holmgren all boarded a Virgin Atlantic commercial flight departing from Orlando, FL to London, which would be using their jet fuel mixture made from recycled emissions. Burton described this experience as one of the high-points of her career with LanzaTech when she and the team witnessed their work coming to fruition.

Regarding long-term effects, LanzaTech has many hopes and goals for the future. As Burton mentioned, the team “wants to see a fundamental change in how we use and dispose of carbon”. At this point, there is always going to be a source of carbon as we continue to burn ethanol and other fuel sources and there is still a major excess of carbon in the atmosphere. One goal in particular that Burton identified is developing a method to gather the carbon through direct air capture and electrolysis. Along with recycling carbon, LanzaTech is also exploring other types of pollution and waste to convert into ethanol and reusable products.

The carbon recycling innovation greatly benefits LanzaTech, as it is the basis for their business. LanzaTech was founded in order to pursue the innovation and pave the way toward a cleaner earth. The innovation has created a strong bond among the employees who are passionate about their work and want to see success.

When asked why Burton has stayed with LanzaTech, her response was “I want to see this through. I want to see this globally, deployed around the world. There is no other company that I would spend this much energy on to get it across the finish line”. Based on the efforts made by other members since the beginning, it can be assumed that the rest of the team shares this sentiment as well.

Since 2005, LanzaTech has grown and now has offices around the world in Chicago where it is headquartered, as well as in London, Shanghai and New Delhi. LanzaTech is also working on constructing more plants similar to the one currently running at a steel mill in China. They are working with Indian Oil Corporation in India to recycle refinery gases. Another project is in Japan with a chemical company that is looking into gasifying municipal solid waste and trash that would otherwise be incinerated. LanzaTech would take the trash, superheat it until it became gas and use the gasified waste to make ethanol. A third project is in progress in California with an ethanol company with whom LanzaTech hopes to gasify agricultural wastes like nut shells and convert that gas into ethanol. LanzaTech is also working in Belgium with the world’s largest steel company to implement their process.

Along with the benefits felt by LanzaTech itself, the innovation also benefits society and the environment. Pollution and carbon emissions have been a major issue in past decades and has been growing steadily over time. Finding solutions to this is paramount to the survival of the planet and all of the organisms that call it home. The carbon and waste recycling process is one of those solutions. Every step toward lowering emission levels and eliminating wastes that might otherwise be thrown in landfills is a step in the right direction toward bettering the planet.

Besides the positive impact the innovation will have on the environment, the converted ethanol also has many different possible applications. As mentioned previously, the ethanol can be and has been used for jet fuel. While cars and trucks are slowly moving toward hybrid and electric power, the aviation sector is far from that capability. LanzaTech’s innovation offers an eco-friendly option instead. Aside from using straight ethanol, substrates can be extracted from the ethanol to make ethylene and polyethylene, both of which can be used to make packaging materials. The bacteria also have the ability to make other chemicals directly besides ethanol like acetone and isopropyl alcohol. There is a broad platform of products that can be created by using the bacteria to eat waste.

As LanzaTech moves forward with its innovation, continues to recycle carbon and eliminates emissions from the atmosphere, the world can move toward a new economy: a carbon circular economy. Burton remarked, “Carbon will no longer be single use. We are giving carbon a second chance”. 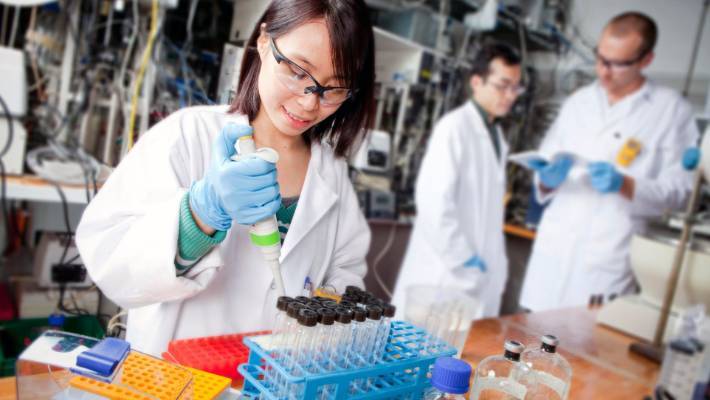 LanzaTech was founded in 2005 by Dr. Sean Simpson and the late Dr. Richard Forster to combat the ever-increasing levels of carbon dioxide in the atmosphere. Through the use of an innovative carbon recycling technology, LanzaTech is able to convert carbon wastes into viable goods. By extracting emissions from the air, LanzaTech is reducing pollution and reusing the carbon in an environmentally friendly fashion that benefits the entire population.