Natural Bread for Everyone

Jesus Elizondo has always been passionate about the culinary arts. He had already worked in the restaurant industry for many years when he became interested in the art of making bread. After taking several courses in business innovation and marketing, he decided to create his own business: Pan Benell. What distinguishes Pan Benell from its competitors is the fact that they’re the only retail brand in Mexico that offers completely natural bread without any chemicals or conservatives. This company has introduced several products to the Mexican market, all of which are made out of organic ingredients and with an innovative slow fermentation process that’s beneficial for consumers. Among their products we can find delicious butter bread, multigrain bread, brioche bread, biscuits, and many other types of bread. They also sell complimentary products such as jams, coffee, and even ready-to-go flour packages that allow customers to make their own bread at home while keeping Pan Benell’s signature flavor.

The company’s main objective is to bring health and nutrition to their customers' tables. They want to give families the opportunity to have a pantry free of chemicals so that they can enjoy some of their favorite meals without any negative effects on their wellbeing. But not only do they offer a large variety of products, they also provide different experiences that customers can enjoy through their restaurants, social media, online courses, and many other interesting activities. Furthermore, they have several social initiatives dedicated to aiding their community.

The innovation behind this company lies in their interesting baking technique for their bread-based goods. This involves a two-stage prolonged fermentation process of the bread dough, as well as a strict use of natural ingredients. As a result, customers can have a better digestion of the gluten protein, a factor that often stops people from eating bread. Other innovative aspects of this company are their continuous improvement in every single step of their operations and the separation of their business in different business branches that help the company profit on their audience’s different interests and thus diversify their income sources: Benell, Casa Benell, and Taller Benell.

Benell is the factory where bread is prepared for retail sale all over Mexico; Casa Benell comprises the restaurants integrated with a grand variety of their products; and Taller Benell is a space created for providing different bread-making courses and workshops. Pan Benell has chosen to be more than just a brand that generates products for retail: it’s a well-developed business that offers customers new experiences and a more immersive look into the company and their members.

Jesús Elizondo, founder of the company, has traveled around the world with the purpose of studying and enriching his knowledge in the culinary arts. While traveling, he developed a respect for the ingredients that make up our food. He started to think about all the products we stumble upon and buy without considering the amount of sugars, chemicals or conservatives they need in order to enhance their taste or last longer on our shelves. For this reason, he became determined to make his own food from scratch. He started off by making his own condiments, such as ketchup, mustard and mayonnaise, and eventually tried making his own bread. It was at this moment when he discovered that there was no bread on the market, neither dry or refrigerated, that could claim it was fully natural and without preservatives. With this in mind, he created Pan Benell in 2016 with the purpose of granting people the chance to eat a healthier and more nutritious type of bread.

Jesús Elizondo says that nothing makes him happier than seeing his customers being delighted about the fact that their products allow them to eat bread without any discomfort or side effects. As stated before, this is due to their long fermentation process and natural ingredients, which are much gentler on our bodies. Due to their increasing popularity, Pan Benell has expanded their selling points to several cities around the country, has opened up two more restaurants in the last couple of years, and has given numerous courses which allow people to learn how to make their own bread. Moreover, Jesús mentioned that the company has plans to expand to other countries in a nearby future.

Pan Benell also has a noteworthy presence on social media, making it a major asset for bringing new customers. On Facebook, they have 13 thousand likes and 14 thousand followers, while on Instagram they’ve reached an audience of over 26 thousand. Through these platforms they frequently share advice related to eating and cooking in a natural way, with the goal of helping their audience develop better habits that they can share with their friends and family. One example of this is their 2019 campaign called "Champion’s Breakfast", where they invited a fitness expert to share some of her recipes and exercise routines. Another example is their campaign called “Mucho Brioche”, where they encourage people to prepare their own bread at home using their products and joining their online courses.

However, Pan Benell recognizes that their brand is not accessible for all Mexicans, which is why they've chosen to share their products with vulnerable communities that cannot afford them. In the following sections, we will be discussing their social initiatives that have left a large positive impact.

The company’s dedication to quality, achieved by their commitment to keeping their ingredients as organic and natural as possible, makes Pan Benell’s brand very attractive for the food industry, especially given consumers’ rising interest in organic products. According to 2019’s Organic Produce Performance Report by the Organic Produce Network and Category Partners, the sales of organic products rose 5.9% in 2019 while the sales of conventional products rose only 2.3%. Pan Benell is tapping into an ever growing market of organic food which is expected to expand even more in the future. Last year the company sold upwards of 70 thousand bread loaves, and their sales have increased year after year.

Benell’s innovative three business branches have also aided the company in maximizing their profits. They have a separate management for each, which leads to a better optimization, organization, and solution-seeking for every problem that may arise within each part of the operation. The separation of these branches was especially helpful during the pandemic. Many restaurants had to temporarily shut down, but Benell was able to keep generating income since they still sold their products in supermarkets.

This level of organization also allows more and better bonds between the company and its customers. As of today, Benell has established 130 sales points within 11 of Mexico’s states. This company was only established five years ago, and yet they have already expanded so much from the small kitchen they started out in. In this year alone, they have managed to distribute their products to new major cities in Mexico such as Culiacán, Ensenada, and Tulum. In other words, they now have a wider public that can bring them new income. All of this is due to the alliances it has made with companies like HEB, Super Mode and many others. One of their main business goals is to expand their reach even further and look into the internationalization of their operations. They have plans to build 4 more restaurants in the city of Monterrey, and look to establish a stronger digital community for their education platforms.

The company has an initiative called Pan Para Todos that consists of making sandwiches every weekend for people in need. It all started in 2018 when Jesús Elizondo was told by one of the supermarkets they work with that some of their bread loaves hadn’t been sold. Since they were still edible and he couldn’t just throw them away, he decided to make some sandwiches and take them to a local hospital. Once he got there, he realized that a lot of people were waiting for their relatives without money, food, or any resources. He was shocked when all of his sandwiches were gone after only five minutes and people were still left hungry. After this experience, he gathered his team and quickly started Pan para Todos with the hopes of tackling this issue. To this day, they’ve given out more than 50,000 sandwiches around the city, helping fulfill SDG 2 of Zero Hunger. This project also helps reduce the company’s food waste because some of the bread that doesn’t comply with Benell’s aesthetic quality standards is used for making the sandwiches instead of being thrown away.

Something very impressive about this project is that it’s the result of an alliance between Pan Benell and 10 other members. For example, they receive products like ham and cheese from Sigma Alimentos and butter from Mantequilla Gloria. It’s important to note that Pan Benell did not contact these companies for their help, but that these companies became interested in Pan Benell after observing the success of their initiative. With this, they are accomplishing SDG 17 of Partnerships for the Goals. Additionally, Pan Benell is helping a community that’s located in Juárez, Nuevo León. They are building an oven so that the people who live there can learn to bake their own bread and not only fulfill their necessities, but also have a new income source. They could sell these products and become a self-sufficient community without any other intervention from Pan Benell or other institutions, contributing to SDG 10 of Reduced Inequalities.

Another contribution is that the company has decided to make a shift to 100% renewable energies in their bread factories. It’s also worth noting that their ingredients and means of production are very respectful to the environment because they’re more natural and organic, which makes them achieve SDG 12 of Responsible Consumption and Production.

Furthermore, their innovative baking process helps consumers eat bread on a daily basis without having any side effects on their health. This makes their products special when compared to many of the brands that we see in our local supermarkets. Conventional bread usually contains refined wheat flour which loses its most nutritious parts during its processing; complex carbohydrates which are hard to process by the human body and makes a person feel fuller for longer; and has a high score on the glycemic index scale, which is a measure of how quickly foods that contain carbohydrates affect blood sugar levels. Regarding this last point, it’s important to mention that foods with a high GI cause rapid spikes in blood glucose levels that can harm the human body over time.

On the other hand, Pan Benell’s bread contains no refined flour, artificial additives, or any other unnecessary and potentially harmful ingredients like sugar. While conventional bread can contain up to twelve grams of sugar per slice, Pan Benell’s bread is sugar-free. Most importantly, its slow fermentation process makes the absorption of nutrients such as iron, zinc, magnesium, antioxidants, and vitamins easier on our bodies. Gluten can even be broken down and rendered in a much more harmless way. Jesús shared with us that customers are often charmed to find out that they can eat bread once again without having a bloated belly or any other discomfort.

But why don’t we see this on the market? This is because slow rise bread takes longer to make and big companies usually look for shortcuts to fulfill their mass production. Their priority is to make a lot of bread in a short amount of time, while Pan Benell’s priority is a consumer’s well-being. With all of this said, it is clear they are contributing to SDG 3 of Health and Well-being. 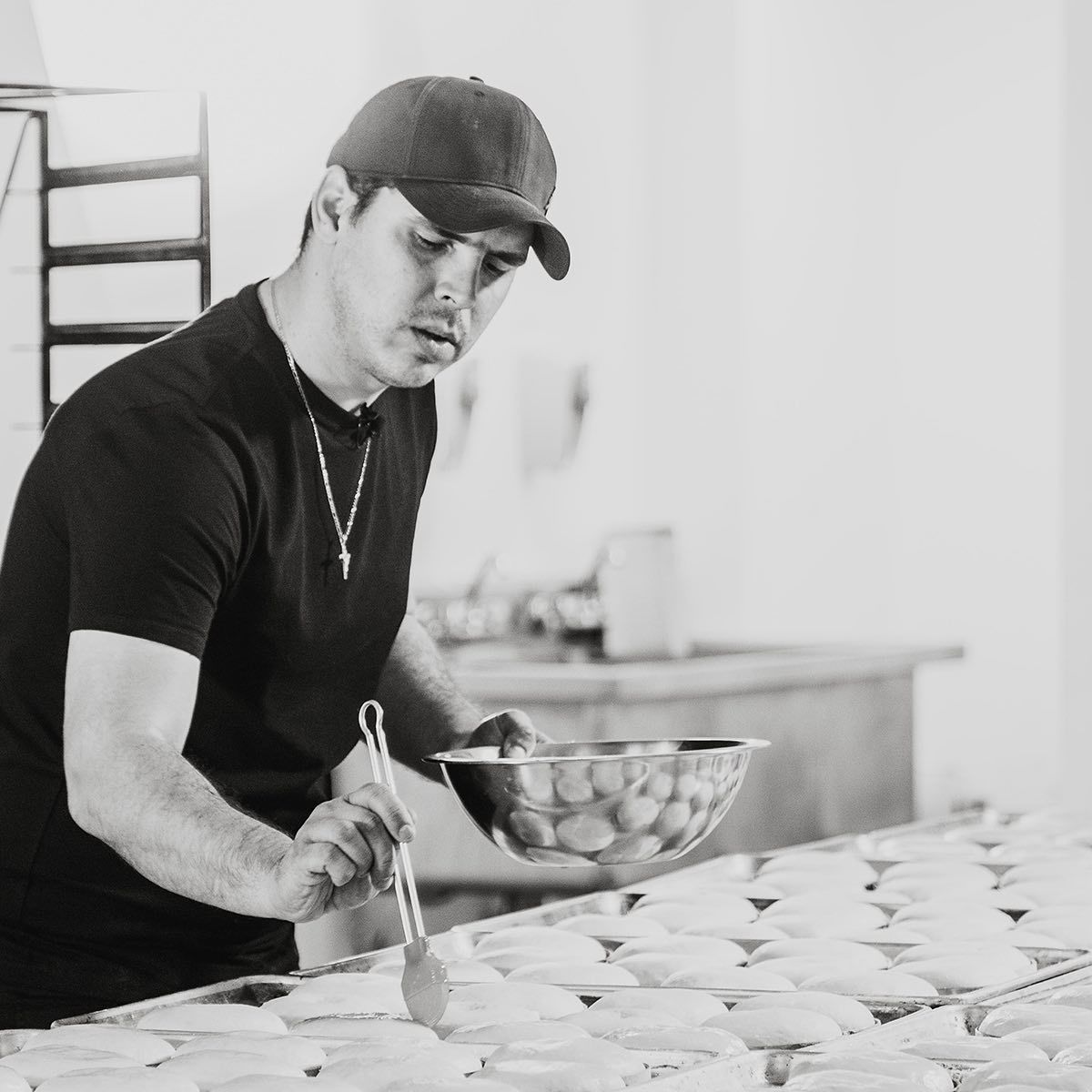 Pan Benell is a business dedicated to the production of natural bread with the ever-present mission of bringing health and nutrition to the community. They also have a couple of restaurants and workshops related to culinary education.