Music as a Therapy For Dementia

The innovation at the centre of Playlist forLife is the way in which one person, Sally Magnusson, has taken a personal experience and created something that can be used by many in a similar position. She has taken an inspiration – her mother’s love of music and the way it transformed their family’s life at a difficult time – and established a research and science-based resource for people living with dementia. At the heart of the innovation is the idea of families, friends, and even those in the early stages of dementia - becoming “music detectives”. This involves sourcing meaningful music in their or a loved one’s life to create a playlist that can assist in several ways – such as being able to reconnect with loved ones and reducing the stress often experienced by people living with dementia during everyday routines.

Dementia can affect a person at any age, but it is more commonly diagnosed in people over the age of 65 years. According to the Alzheimer’s Society, there are more than 850,000 people living with dementia in the UK and this is set to rise to over one million by 2021. Dementia is an umbrella term for a range of progressive conditions that affect the brain. The brain is made up of nerve cells that communicate with each other by sending messages. Dementia damages the nerve cells in the brain so messages can’t be sent from and to the brain effectively, which prevents the body from functioning normally.

Alzheimer’s disease is the most common type of dementia in the UK. It is a physical condition caused by changes in the structure of the brain, due to a build-up of ‘plaques’ and ‘tangles’, and this can result in a shortage of important chemicals that help with the transmission of messages. Alzheimer’s disease can affect concentration, decision making and everyday living skills. Symptoms tend to develop gradually over time and may include difficulty remembering recent events while having a good memory for past events, poor concentration, confusion and disorientation, slow, muddled or repetitive speech, reduced ability to perform everyday tasks such as cooking. Medication is available to help slow progression, but it does not prevent Alzheimer’s disease.

The innovation at the centre of Playlist for Life is the way in which one person, Sally Magnusson, has taken a personal experience and created something that can be used by many in a similar position. She has taken an inspiration – her mother’s love of music and the way it transformed their family’s life at a difficult time – and established a research and science-based resource for people living with dementia. At the heart of the innovation is the idea of families, friends, and even those in the early stages of dementia - becoming “music detectives”. This involves sourcing meaningful music in their or a loved one’s life to create a playlist that can assist in several ways – such as being able to reconnect with loved ones and reducing the stress often experienced by people living with dementia during everyday routines.

The innovation is underpinned by evidence of the positive effect of music; a review of non-pharmacological interventions to treat behavioural disturbances in older patients with dementia found that “among sensory simulation interventions, the only convincingly effective intervention for reducing behavioural symptoms (specifically agitation and aggressive behaviour) was ‘music therapy’. The practice of Playlist for Life is based upon the evidence-based Gerdner Protocol Fifth Edition developed over the course of twenty years at Stanford University. In particular, Playlist for Life promotes the use of ‘therapeutic scheduling’ i.e. timing listening sessions for thirty minutes before difficult times or activities. The protocol describes how the correct use of playlists is proven to reduce stress and the need for medication amongst people living with dementia. 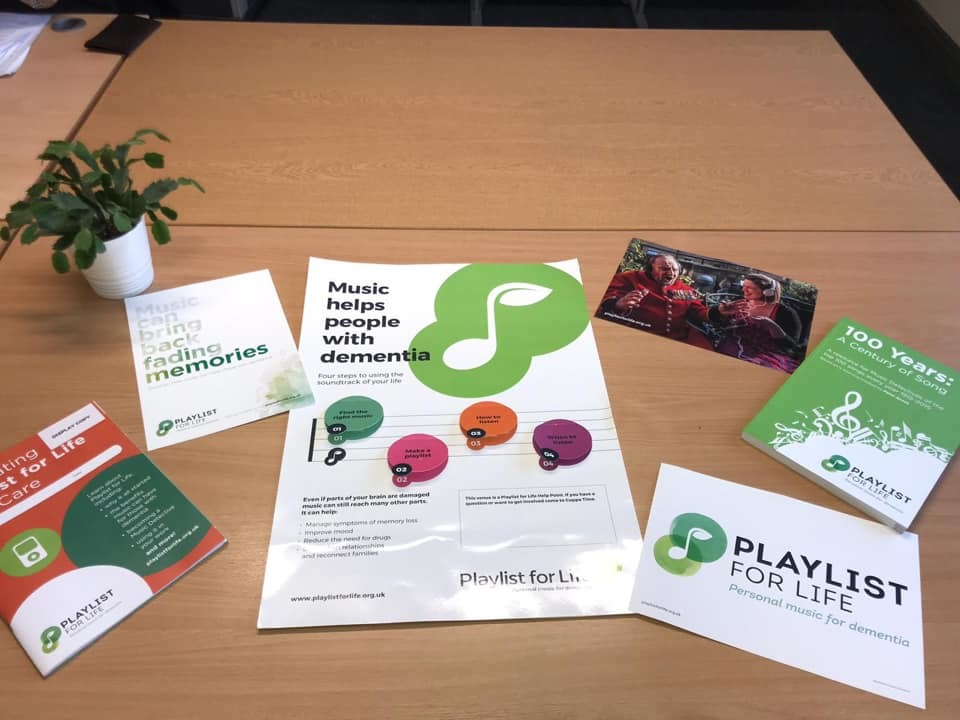 Playlist for Life wants everyone with dementia to have a unique, personal playlist - all the tunes that are most deeply attached to people's memories and emotions, gathered together in one place.

The inspiration was through a personal experience. The idea was originated by Sally Magnusson. Her mother (Mamie) was diagnosed with dementia and was living with it for many years. By accident Sally found out that music can assist with living with dementia, as there is no cure for dementia, the music showed it had a positive effect on Mamie. The positive effects for example were that Mamie lost all communication and verbal ability with her family however, with music being involved it allowed her to sing lines of the song back to their family, pitch perfect at times. Sadly in 2013 Mamie passed away and from there Sally wrote a memoir named ‘Where Memories Go’ and from conducting research for her memoir she found out that this has not yet been done in the UK, only in America. From there, she contacted an academic from Glasgow Caledonian University which then resulted in them both creating this social enterprise.

The motivation behind this innovation was that Sally wanted to have an insight as to if her family were lucky with Mamie or whether it was actually scientifically proven that music can assist with people living with dementia. With research conducted it appeared that there were only positive benefits to come from this innovation however, every dementia journey is different, with that said, you can tailor it to every individual to suit their needs. Sally has helped create a form of therapy for those living with dementia and their families.

The following four United Nations Sustainability Goals that can be applied to the social enterprise Playlist for Life are:

Goal 17: Partnerships For the Goals

Playlist for Life's main aim is to better the life of people living with dementia through the form of music. It focuses on people living with dementia and the families of those involved. It provides a service through training staff to assist people with dementia within the organisation as well as offering consultancy to the families and those with dementia. Free training courses are available all over the country, with the option of volunteering (there are currently 21000 volunteers). The organisation works within a three-year business strategy to build interest within the organisation with each year having a main focus. 2019 is currently the second year in the three-year plan and its main focus is to raise the awareness and expand the networking of Playlist for Life within the UK. Along with this, the organisation also plans to become more self-managed and self-sustaining. The organisation has one main office located in Glasgow, Scotland; however, they can be found by their website. The year ending 2017, Playlist for Life’s total funds were estimated at £110,064. This has increased from the previous year which was £72,493. Playlist for Life have many partners that support with funding - organisations that help fund the enterprise are charity and educational institutions ranging from Glasgow Caledonian University to the Alzheimer’s Society.

The organisation considers itself as a benefit to society as it helps reduce social isolation through bringing families together and helping to better connect them through the power of music. It can also be considered as a social benefit as music is one of the more social platforms available to every person who can relate and link their own personal memories to. Playlist for Life, have provided over 200 iPod’s to those who require them. The organisation provides equal opportunities for all participates and helps to activate the link between someone with dementia and someone trying to assist those living with dementia. Playlist for Life has boosted communication confidence for people living with dementia as music has allowed them to answer simple questions more clearly and has also improved their eye contact. The organisation is therapeutic which helps to improve the quality of life for people living with dementia and also families.

The organisation does not have a large environmental impact within the society. However, the office prints in black and white and they print their documents double sided. Recycling of equipment such as MP3 players being passed onto clients is encouraged within the organisation. 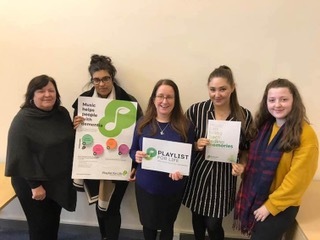 Playlist for Life is a social enterprise based in Glasgow, Scotland. It was founded by news broadcaster Sally Magnusson who found music’s ability to provide a “flashback feeling” can be a lifeline for people living with dementia. Working with partners, the main aims of Playlist for Life are to: make the power of music and 'music detective' skills general knowledge by raising awareness; through public education establish a vibrant, grassroots network of trained health and care professionals, care homes, volunteers and community Help Points across the UK; identify a clear, accessible, legal route to make; and use playlists in every setting and secure the resources required to deliver its objectives.