Moving the Caribbean into the Virtual Age

Money Mova is a platform that gives the Caribbean a heavier influence and presence in online transactions. General users of this online platform, Money Mova, range from mid-teens to middle-aged adults, those most likely to have web proficiency. This is a common user age range for many online market sites such as Amazon and eBay, although it is currently the only site of its kind that operates in this geographical area. Sites such as Amazon, Etsy, or eBay, while accessible, do not have a proper banking gateway to allow full user transaction abilities. Money Mova works directly with the banking systems to ensure full transactions are processed and completed. Money Mova’s mission is to empower the people within the Caribbean markets, inspire them to flourish as entrepreneurs, and expand their local stores into an online presence. Money Mova aims to spread the Caribbean culture and their products throughout the world, while helping to generate more revenue circulating in the country. This therefore contributes to building infrastructure and economic prosperity for impoverished people in the Caribbean like that of Money Mova’s home base, St. Vincent and the Grenadines.

According to the World Bank's Data Bank, St. Vincent and the Grenadines's 2017 per person Gross Domestic Product was 7,145.1 USD. This is less than the world average of 10,721.6 USD and less than the Latin American- Caribbean market’s average of 9,274.8 USD. For further comparison, the Euro area and nearby North America have Gross Domestic Products per capita of 36,870.2 USD and 58,070.1 USD, respectively. Additionally, the GDP per capita does not account for the difference in contributions from the main island of St. Vincent (where there is the most poverty) vs. the Grenadines (mostly held by private resorts and families). To be sure, there has been growth over the past two decades, and the majority of village users have access to the Internet; however, economic data is skewed and does not represent the lack of opportunity on the main island, where the majority of the population stays. Many Vincentians are used to leaving the country for either another Caribbean island or a larger nation so that they can send money back to live in St. Vincent. Job opportunities and entrepreneurial education is sparse in the region.

This innovation falls into the category of Sustainable Development Goal #9, Industry, Innovation, and Infrastructure. By targeting those of the working class age in St. Vincent and the Grenadines, Money Mova is focused on seeing economic growth in terms of the nation’s GDP within the next decade. Through this virtual marketplace, Vincentian users now have a platform to sell items they create, not just in the Kingstown square, which can be difficult to travel to, but also from their local areas. They also have a chance to expand and test out the items or services that they sell. Besides word of mouth, there is no good way for the majority of Vincentians to tell others about their services, and this is an inhibitor to growth because without knowledge of products and services available, there is no chance for Vincentians to grow their domestic customer or consumer spending base. Money Mova’s simplified process for providing this to the nation will allow consumers and sellers to buy and sell more domestically or even internationally in a fashion that most Vincentians are used to. It also encourages Vincentians to increasingly use currency rather than barter in their trades. This helps bolster income in a way taxable to the whole of the nation, thereby providing an assistance to infrastructure in finances and trade. 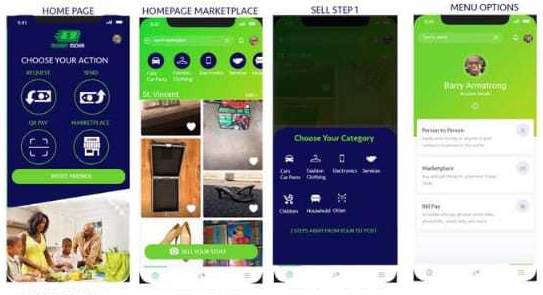 CEO Alexander Pitt, interviewed by St. John’s Aim2Flourish participants on April 14, 2019, has been working on the Money Mova mission since first quarter 2017. He said his main inspiration with the company was his mother, who had migrated to the United States from St. Vincent about 35 years prior. He stated during the interview that she thought she had to leave the island for a bigger opportunity. He believes the opportunity does lie within the island itself, its direct access to raw materials and agriculture; the only thing that was missing was the presence for distribution. From there came Money Mova and its mission to provide more opportunity for the families within the Caribbean by relying on their resources to be distributed in a larger scaled market.

Alexander also mentioned his passion for holding events that enable talented people from all over the world to display their talents, creativity, outstanding skills, and profound knowledge. Money Mova is a great way to encourage talented people to show themselves and contribute themselves to corporations around the world, and also to facilitate local companies to expand their markets in the long run.

The innovation impact Money Mova has created for the Caribbean and their islands has both long-term and short-term effects. The short-term impact this platform has created will help generate a long-term increase in GDP for the company, therefore putting the Caribbean on a higher and more stable financial level when compared to other countries and operating markets. The short-term impact of the platform contributes to this larger impact by opening virtual market systems to the Caribbean residents. This platform allows local talent to express their services and local shops to provide their goods across the world, rather than limited to their own geographical area. The impact is most directly evident in the revenue the new markets help to produce for the retailers and service providers, which then circulates in the country.

Money Mova benefits from working toward the greater good for the Caribbean by opening new virtual market space for the local shops and local talent. The individuals residing in this area are then empowered and inspired to create new products or endorse their services to a larger population. Because these companies and talents did not have direct access to markets like those advertised in the United States (e.g., Amazon), Money Mova is able to stabilize themselves as this direct link to a greater market. This platform for money transfer also opens the Caribbean islands to new investment opportunities as Money Mova continues to spread their mission. The CEO has direct cultural connection to these islands, and therefore takes pride in knowing he is helping them to increase their GDP and spreading information about the talents their people possess as well as the local products they create.

As Money Mova starts its largest marketing campaign this summer, during Vincentian Carnival season, it expects to see a large growth in its user base due to the influx of citizens returning from abroad and youth mobile users coming constantly to town. Though Money Mova only has three full-time employees, it expects to see a rise in Vincentian domestic talent through its marketing campaign. With the rise in domestic talent, Money Mova can expand its home base and invest into key sectors of the Caribbean tech market. The profit via transaction fees, lesser in comparison to Western Union’s, allows the business to grow.

The current main members of Money Mova also see it as a passion project. With a combined 20 years of experience in mobile development, web development, and Internet-based marketing, Money Mova’s core leadership has long discussed pushing their developments to areas that have a larger need and unrealized demand for the infrastructure that their platforms help create as opposed to the crowded regions such as North America. Money Mova allows them to expand to the new market of the Caribbean. Because of the region’s current lack of tech development, Money Mova can grow with the region to see what innovations fit the theme and culture best.

One of the main obstacles Money Mova has faced was setting the tone for the selling environment. Because the Caribbean markets have not worked on a virtual basis prior, it is harder to explain how there is more to sell than the standard finished or raw products. The intellectual property aspect such as digital design, photography, and freelance virtual work are services that can be sold and purchased through an online platform. The ability to open markets for products and services across the world is where the future of our supply and demand system is heading, according to Money Mova. The hope of expanding the market into the virtual future for Caribbean sellers and entrepreneurs is what Money Mova is aiming to do. The biggest social responsibility, as said by Alexander Pitt, “is influencing and helping people realize their full potential from not just being farmers or having tangible products, but to realize their creativity is very very valuable.”

Alexander’s words, “ we empower the entrepreneurs, and the entrepreneurs empower the country,” can conclude his views on the relationship between his company’s long-term interest and those of the country or society. Besides the contribution Money Mova is making to help local companies enter the international market, these companies or entrepreneurs will stimulate the development of the economy and the country, and eventually improve people’s quality of life. In other words, the more entrepreneurs and the better companies develop in the future, the more tax they will pay to the government. In return, the government will spend the tax income on infrastructure, medicare, and social welfare to improve people’s quality of life.

Money Mova has many long years ahead to continue spreading the local talent and cultural products. We are very glad that we have been a part of their flourishing.

Money Mova's mission is to empower Vincentian entrepreneurs so that they may empower their country. Money Mova seeks to build the economy and talent stream of St. Vincent and the Grenadines through its provision of its virtual marketplace. Money Mova allows for virtual transactions to be made through a mobile platform for all Caribbean users.