Jeff Thaler's passion for helping people, society, and the environment has fueled his innovation for Lettuce Tree Farms. What makes Lettuce Tree Farms so unique is that sustainability exists at the core of the company. Every decision made is with the consideration of sustainable practices in mind. Thaler refers to this idea as “positive impact agriculture”. Thaler states that the “negative impact that we have already done cannot be reversed by a zero-impact approach. We have to actively reverse the bad things we have already done, which is why I call it positive impact agriculture.”

Right now, Thaler’s innovation of positive impact agriculture exists within a couple of shipping containers contained in a greenhouse-like structure built in the spring of 2021. Back in 2018, Lettuce Tree Farms started as a few shelves of microgreens. Within nine months, growing microgreens became a full-time job for Thaler. After nine more months of growth and brainstorming, a larger growing space was needed. In search of a space that could keep up with the demand of sales while also conserving the energy and resources used, Thaler’s shipping container concept came to life. The shelving within the shipping containers can yield three to four times more microgreens than in the previous setup of Lettuce Tree Farms while keeping energy and resource use low. The recently built shipping container farm is also able to grow and house other fruits and vegetables as well as microgreens.

The microgreens being grown at Lettuce Tree Farms are currently being grown in soil. The specific soil being Tilth brand (from Rust Belt Riders composting in Cleveland) mixed with peat moss. Within the new structure, Thaler is beginning trials of various growing methods such as aquaponics or aeroponics, so that Lettuce Tree Farms can provide real-life, data-driven study about growing methods that can be used by other urban farmers and communities looking for alternative ways of providing healthy, sustainable, and locally sourced produce. Thaler states that his innovation at Lettuce Tree Farms has an “end goal of providing more nutritious, better tasting, more profitable crops for a small-scale urban farmer.” The innovation of Lettuce Tree Farms will help to combat hunger, provide healthy and fresh produce, reduce unequal access to nutritious food, build sustainable cities and communities, all while ensuring responsible consumption and production. 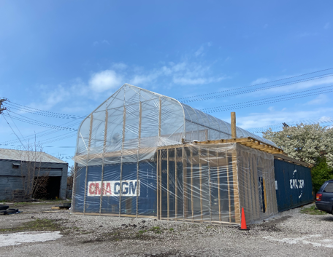 The inspiration for Lettuce Tree Farms is rooted in Thaler’s interest in combatting food deserts for local communities. A food desert is an area where it is difficult to buy affordable, healthy, fresh, good-quality food.

The idea for Lettuce Tree Farms started back when Thaler was a student studying Agribusiness at the Ohio State University. Researching and learning about the challenges and issues present within our current food systems in the United States, especially those in urban areas, Thaler’s passion was sparked.

During one of his years in college, Thaler was a part of an aquaponics project implemented in Honduras. After a yearlong project and research completed at OSU, Thaler and his groupmates spent two weeks rebuilding aquaponics systems for communities in Honduras. The professor saw the passion in Thaler and at one point stated to him, “you’re going to make a business out of this, aren’t you?”. A determined and driven Thaler responded by saying, “if I do it right, I’ll make several”. He added that he saw too much value and the possibility to help people not to create a business.

After getting his degree, Thaler connected with Dan Brown (co-founder of Rust Belt Riders) at an event where Brown was speaking on sustainable food efforts in Cleveland. At one point, Jeff was discussing his idea of positive impact agriculture, when Dan Brown overhears and joins the conversation. Soon after this connection was made, Thaler started as a delivery driver for Rust Belt Riders. Through this job, he collected compost from various kitchens in the Cleveland area. While making his rounds, Thaler was able to regularly interact with the chefs and restaurant owners collaborating with Rust Belt Riders. After starting to grow microgreens, Thaler went back to those same chefs he built a connection with through Rust Belt, gaining his first customers for Lettuce Tree Farms. Thaler notes that his first customer for Lettuce Tree Farms was Herb'n Twine Sandwich Shop, who ordered an entire flat of pea shoots every week.

Since the first customer, Thaler has constantly worked on improving his business to be as sustainable as it can be. Lettuce Tree Farms has the goal of leaving a positive impact on the surrounding environment, people, society, and businesses. Over 59% of the total population of people living in Cleveland are living in a food desert. Being located within the city, urban farms such as Lettuce Tree Farms offer individuals living in food deserts access to affordable and nutritious food. By networking with other local businesses, urban farms also impact the business culture in the city in a positive way. Since working for Rust Belt Riders as a delivery driver right out of college, Thaler has kept a connection with the company by utilizing their brand of soil (Tilth) to grow his microgreens. This soil is beneficial to the plants by providing necessary nutrients (while also improving taste!). A restaurant that is both composting with Rust Belt Riders and purchasing greens from Lettuce Tree Farms is not only cutting back on food waste but actively using food waste to build soil that is used to grow more food for the restaurant. Collaboration plays a vital role in sustainability practices, and in turn, the business model of Lettuce Tree Farms.

Thaler would like to continue to provide local microgreens to be available at restaurants in Cleveland and to individual buyers. The collaboration between Lettuce Tree Farms and Rust Belt Riders is an existing example in the city of Cleveland of a circular economy that restaurants and individuals can interact with alike. Thaler has also started trials of other produce and lettuces to be grown at the farm. Thinking into the future, Thaler would like to provide local food for a much larger region as well as scattered regions. After more time spent growing greens in his shipping containers, Thaler would like to expand by selling the containers to help other local urban farmers provide produce to their regions. Considering the broader picture, Thaler envisions a change in the way we plan agriculture, with an increase in support of the positive impact goal. Large-scale farms can scale down the amount of land use, while producing the same yields and allowing the land to return to its original state of prairie, forest, etc. Thaler states that “we can provide all of the food we need, and benefit all of the other living things around us, rather than to their detriment.”

In the three short years since Lettuce Tree Farms started in Cleveland, it has steadily grown even through the trying times that almost all businesses encountered during the pandemic in 2020. The majority of the microgreens sales within the first two years were to local restaurants. With the current ongoing pandemic, Lettuce Tree Farms has found a new market and seen a surge in orders from Community Supported Agriculture (CSA) programs, as well as meal delivery services. The most recent record month in sales happened in March of 2021, quadrupling the production from the best point in 2019, and doubling from the record in October of 2020. Thaler currently has three people on the team: himself, one full-time employee, and one part-time employee. He hopes to grow to have (approximately) four full-time employees, a few part-time employees, and volunteers to help manage the shipping container farm. The ever-increasing success of the business is providing Thaler the means to support more employees at the farm.

Thaler measures his success on the positive change that he sees, rather than simply considering financial benefits. He thinks of sustainability first, profit second. The social and environmental benefit is considered in every aspect of production for Lettuce Tree Farms. As aforementioned, much of the soil used is created from recycled food scraps at Rust Belt Riders. Thaler then composts the scraps again, so rather than degrading soil, he is building soil. All water used in the growing/cleaning process is filtered, dechlorinated, and defluorinated to eliminate any pollution to the crop. Thaler is also starting rainwater collection and filtration for irrigation use. Outside air is ran through several filters before reaching the growing spaces, guaranteeing that it is going back into the outside world cleaner than it came in.

In providing shipping containers to be sold to other urban farmers, Thaler has strategies set to make all farms operational off the grid. The farms will use natural gas heat by breaking down food scraps and yard waste through a biodigester. Wind turbines/solar panels will maintain the farm’s electricity. These developments will allow the farms to be used on any vacant plot of land, food desert, or rural area without installing utilities and paying high costs. This also creates a food system that is stable in the event of a natural disaster. Eventually, Thaler would like to promote the ability of these shipping container farms to be sent to disaster zones. Shipping containers can also easily be removed after society recovers so that local businesses and the economy can once again flourish.

In Thaler’s own words, “Lettuce Tree Farms would like to leave any person, place, or group we interact with better off than when we first met, or when we first got there. Whether that is increasing the biodiversity of a plot of land we were farming for a number of years, increasing access to healthy food for people or customers that we were interacting with, or whether that is allowing an employee to learn what they need to do to go start their own business, we want to help people in any and every capacity, and we want to be successful in order to keep helping people, not at the expense of them.” 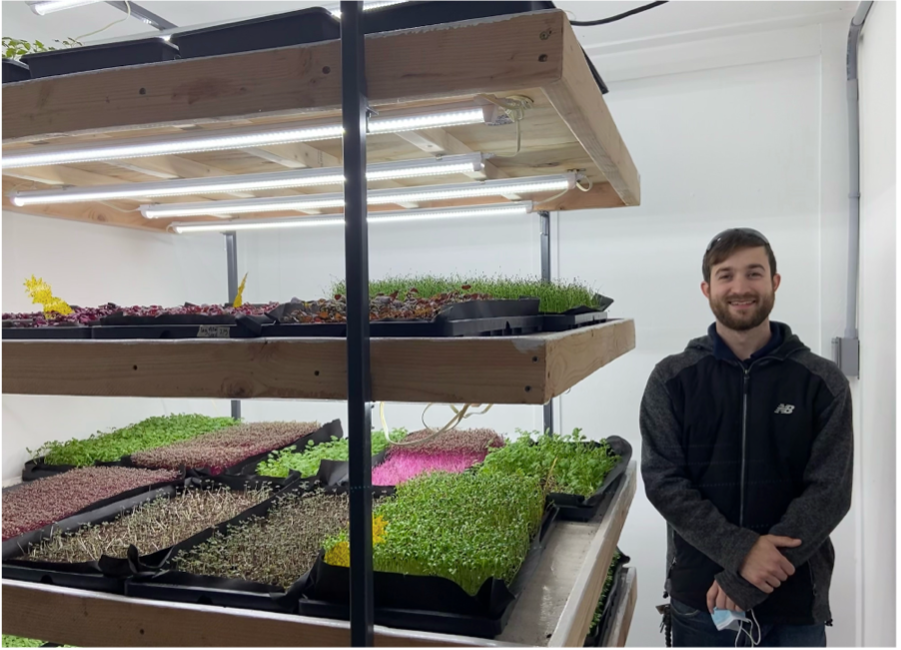