Thanks to a long history of liquor-making, Baijiu (Chinese white spirit) is deeply embedded in the Chinese culture and several famous liquor brands have considerably contributed to the growth of the national economy. Brands such as Luzhou Laojiao and Langjiu Group can achieve sales over 10 billion RMB a year. However, the huge production of Baijiu p high levels of pollution. The production of liquor requires lots of non-renewable resources such as coal and natural gas as fuel. On the other hand, the disposal of the by-product of liquor making, vinasse, is inefficient as it is often simply treated as waste. The company we introduce saw the business value of vinasse and came up with an innovation that is profitable and has made Baijiu production more sustainable.

In the original traditional circular model of processing vinasse, distillers purchase grains, such as sorghum, from peasant households. They use these grains to distil and make alcohol. In this process, some vinasse will be produced as a by-product. The vinasse is sold to farms and used to feed cattle and other livestock. The livestock in farm, in turn, will produce manure which is used as a natural fertilizer by peasant households to grow sorghum. This creates a complete cycle (shown in Exhibit 1).

In the innovative new model for processing vinasse introduced by LHAAH (shown in Exhibit 2), as in the original model, distillers purchase grains from peasant households and use these grains to produce alcohol. But after distillation, the vinasse will go through three processes: 1) Drying, 2) Secondary distillation to remove residual ethanol and other substances, 3) Separation into feed and husk. The feed will be sold to famers to feed livestock. After the treatment processes described, this feed will better than unprocessed vinasse, because of the higher nutritional value. Consequently, it can be sold at a higher price. After that, as in the original cycle, manure from livestock is used as fertilizer to grow crops. On the other hand, the husk will be used as biofuels by the distilleries. According to the company's staff, one ton of this biofuel is equivalent to the same weight in coal or about 450 cubic meters of natural gas. These biofuels will be used to create the heat needed for distilling alcohol, and the residual ash after combustion can also be used as fertilizer for agricultural crops. After the treatment processes, the value of vinasse is increased by about 10 times compared with the original model.

To obtain a steady supply of vinasse, LHAAH has signed contracts with several distilleries. Thus, it profitably helps these distillers process their waste more sustainably and decrease their costs, without engaging in in alcohol manufacture. 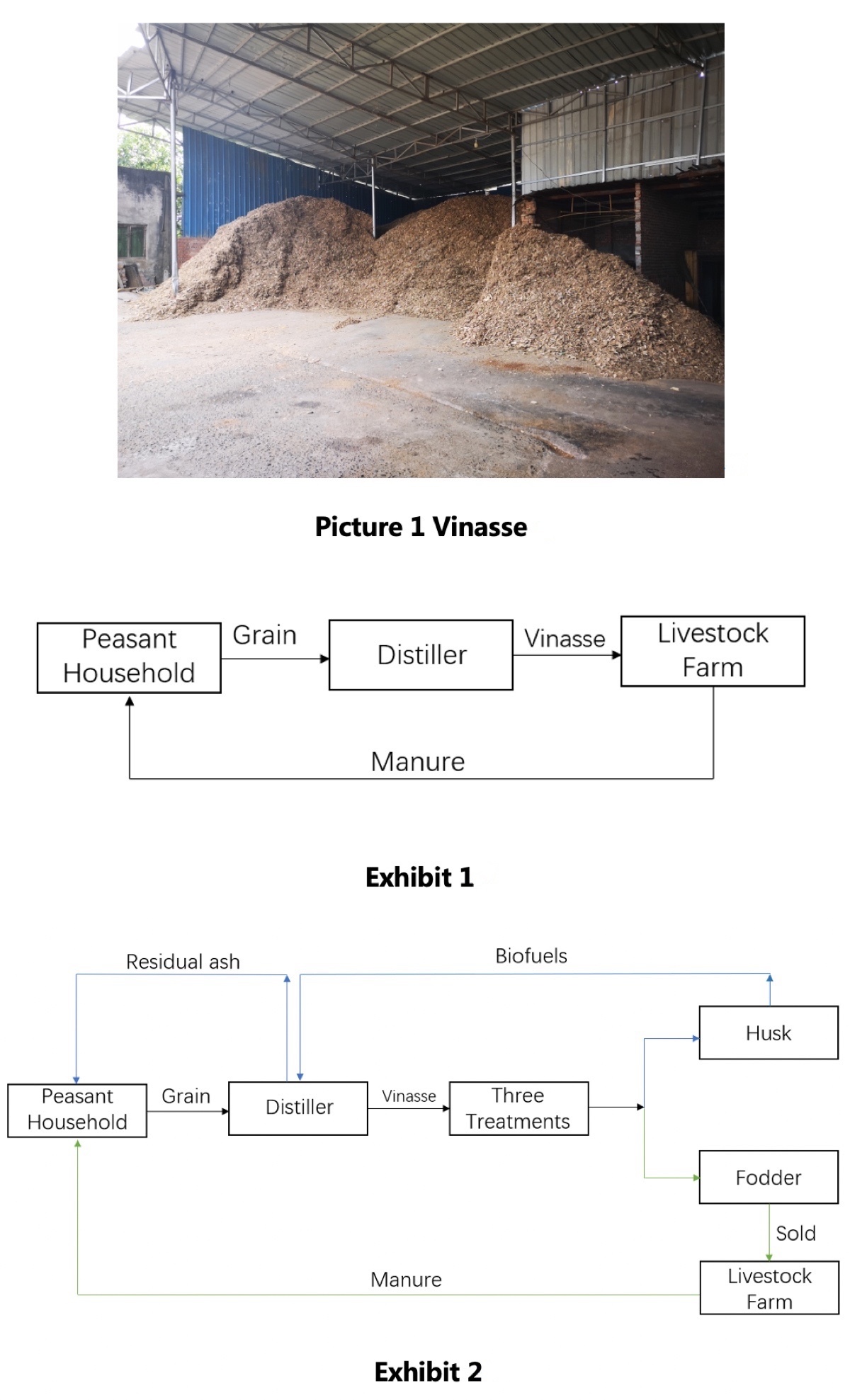 LHAAH has been engaged in the vinasse-recycling business for 7 years. Yong Min, the founder of LHAAH, noted the important place the famous Chinese white spirit Baijiu occupies in Chinese culture and started to learn more about this alcoholic beverage. In the process, Min found that the traditional method of vinasse treatment was to sell it directly to farms as fodder for livestock such as pigs and cows. However, the residues from distillation still contained high volume of coarse fibre that was difficult for livestock to digest, leading to lower profit. This approach not only leads to a low utilization rate of vinasse, but also adds little value to this by-product. Min was motivated to improve this situation: "It's about time for us to seek something greener for our traditional industry". He seized the opportunity and started to search for appropriate technologies to produce a profitable business model. "I used to see manufacturers discharging massive amounts of pollutants into the environment without hesitation. I thought I would rather like to try something different", says Min.

Min's business of recycling the vinasse from liquor distillation has filled an important gap in the liquor industry's production cycle, making it more efficient and circular. The products have not only become more valuable, but also can serve a more specialized purpose. Through low-pollution processes, this innovation has increased the rate of utilization of vinasse.

Treating the chaff from vinasse as biofuel is one of the highlights in this innovation. LHAAH is located in Luzhou City, which is famous for its liquor industry and its chemical industries. Both of them are energy-intensive industries and highly rely on Luzhou's rich reserve of coal and natural gas. This is especially true of the liquor industry, which requires a considerable amount of fuel as a heat source during the distillation stage. With government policies being introduced to optimize the country’s energy infrastructure and rising social awareness of environmental degradation, renewable energy sources, such as Min’s biofuel, are highly sought after to replace fossil fuels. Min was one of the pioneers in the business of vinasse recycling and his actions could bring more attention to waste treatment innovation in making industries circular.

Min's biofuel is fully renewable, and its performance is promising. The biofuel generated from vinasse is mostly transferred back to the original distillery to be used as a heat source. The cost of this biofuel is lower than that of traditional options, such as coal or natural gas, while producing an equal or smaller amount of pollution.

After applying the new method, the annual revenue from the vinasse recycling process has increased ten fold. The entire process generates 18 thousand tons of fermented fodder, 13 thousand tons of biomass fuel (husk) and 3 thousand tons of organic fertilizer annually. The total value of annual production of LHAAH has reached over 40 million RMB. In addition, the fermented fodder from the recycling process has slightly higher value compared to the traditional product in the fodder market. The other product, biomass fuel, can be sold as the substitute of fossil fuel which also increases the profit of the company.

Although this new method involves higher costs than the original one – for instance it requires investment in specialized equipment, and there are increased transportation and labor costs – it still is profitable for the company.

The most essential environmental benefit produced by LHAAH is that it helps to create a closed-loop supply chain for the liquor industry. Additionally, the secondary resources that are produced by processing the waste can partially replace some primary resources, especially the non-renewable ones. As mentioned, LHAAH’s innovative approach to recycling vinasse produces husk, which can be used as biofuel and be repurchased by distilleries to replace the coal or natural gas used in production. As said by Min, the energy produced by a ton of the biomass fuel is roughly equivalent to that produced by a ton of coal, while resulting in far less pollution and carbon emission. As is well known, emissions from burning coal contribute to acid rain, haze and smog that affect nature, humans, and animals. Although it is difficult for liquor enterprises to completely use husk to generate heat for distillation, this process could lower the environmental impact significantly. To date, LHAAH has effectively processed more than 500,000 tons of vinasse and has produced approximately 81,250 tons of biomass fuel over 7 years of operation. As LHAAH plays a key role in helping to prevent the pollutants from being released by liquor makers, its innovative model contributes to achieving SDG 7 (Affordable and Clean Energy) as well as SDG 13 (Climate Action). Besides, the fodder sold to local livestock farms and fish farms holds almost the same nutritional value as rice. Overall, by making the manufacture of Baijiu more sustainable, LHAAH’s model also contributes SDG 12 (Responsible Consumption and Production).

As for social benefits, LHAAH has helped 6 poor households in a local village lift themselves out of poverty. The core concept is to subcontract the disposal of residual ash after combustion to them, which they can sell to a flower market or vegetable-growing farms. This approach is mutually beneficial for both LHAAH and the participating households. The firm helps low-income families obtain a sustainable livelihood. At the same time, there is no extra need for LHAAH to recruit workers for completing the work of disposal. According to the Chinese policy on Development-driven Poverty Alleviation in Rural Areas, the lowest annual per capita disposable income should up to 10 thousand RMB by 2020. The 6 households LHAAH is working with can earn income ranging from 60 to 80 thousand RMB per year. This shows that LHAAH also contributes to SDG 1 (No Poverty). Min points out that the poor are highly productive since they are eager to find opportunities to support their families.

Luzhou Hanji Agriculture and Animal Husbandry Co., Ltd. (LHAAH) is a company that focuses on the business of recycling and extracting more value from vinasse, a by-product of liquor production (Shown in picture 1). The company was founded by Min Yong in Luzhou, Sichuan, which is one of the leading cities for the production of Baijiu liquor in China. LHAAH is a small-sized private enterprise. It was established in 2014 with 70 job positions, among which 35 workers are responsible for first-line production. Moreover, it has introduced an innovative method for processing vinasse that has increased profits and contributes to sustainability. We consider that their business model has great potential to scale up through widespread adoption by other liquor manufacturers.