The key innovation of kitabisa.com is providing a digital platform that makes the social crowdfunding campaign easier and more transparent with better public control and real-time feedback. The platform provides real-time and accountable reporting and updates. The team behind the platform also perform campaign or project verification both off and on the field. 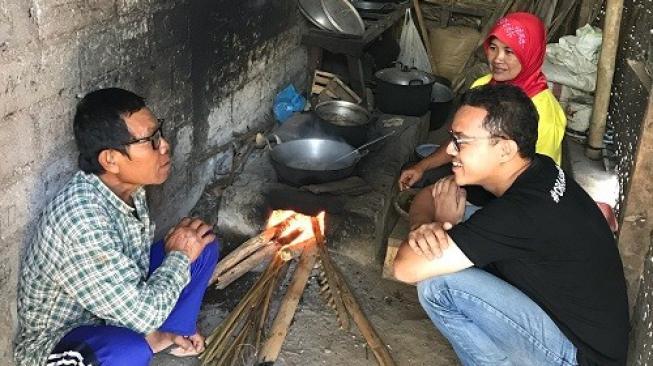 “Internet of kindness”, was the tagline that M. Alfatih Timur, founder and CEO of kitabisa.com, highlighted in one of his presentation that can be found on YouTube. M. Alfatih Timur, well known by his nickname Timmy, believes that his company is part of a greater mission to make this world a better place.

In the same presentation, Timmy showed a case of social fundraising through his company platform for a newly born baby named Shawqy. The baby was born prematurely with defects on his heart and lungs, and it needs to be taken care in an NICU (Neo-Natal Intensive Care Unit) facility in order to help it to survive. That would cost a fortune the couple Irsyad and Dita, the baby’s parent. It may cost them up to 20 million IDR per day (about 1400 USD). For many Indonesians, most of them still don’t have proper insurance coverage, that’s a lot of money that they can hardly afford. Even for the middle and higher income-segment, they will have a problem to pay that amount of money.

Thanks to Timmy’s company platform kitabisa.com, a fundraising campaign managed to collect a donation as much as 228 million IDR (about 15000 USD) within a week from 1,620 of Good People (the platform’s term for donors or funders). This collective donation can help Baby Shawqy to be taken care intensively for many days. After a few weeks, the couple posted a picture in kitabisa.com that Baby Shawqy has left the NICU to be taken care in a normal facility. And a couple of weeks after that, the couple posted again a picture that Baby Shawqy can be released from hospital. Believe me, tears are shed in my eyes while hearing that story, I’m about to cry! And I believe that will happen to many of you, too, if you hear such kind of story, a story of human kindness that made possible by internet and digital platform.

Since he started studying at the University of Indonesia (2007-2012), Timmy, born in 27th December 1991, was very keen in learning about social entrepreneurship. He learned a lot from his lecturer and mentor Prof. Rhenald Kasali during that time. He also browsed the internet a lot and found out about the crowdfunding business model while browsing. From there, he continued learning about social entrepreneurship and social innovation. In his spare time, he is also active on leadership teams in several student organization bodies. This led him to found and lead the startup Kitabisa.com as one of the rising startup companies in Indonesia.

Timmy and another co-founder started kitabisa.com in 2013. At the beginning, nothing happened to the platform. The platform was there, but no funding activities took place for the first two years. But Timmy never gives up. At one point, he continued funding and bootstrapping his startup using leftover money from his wedding gift. Finally, he found some investors interested in his ideas, and from 2016 on, the company started to grow and start generating funding for people who need it.

In one interview with Indonesian newspaper, Timmy said: “entrepreneur is about money, but social entrepreneur is about being faithful to its mission”. This clearly shows that kitabisa.com has a social mission which is to help people in need. He describes kitabisa.com platform as “connecting good people”. He also said in another interview that something that makes him and his team happy and passionate to come to work every day are the happy news from the people that got their problem solved by using his company’s platform. He and his team consider that kitabisa.com as a company is a social movement packaged with a “touch of a business”.

Kitabisa.com may have been successful with its social crowdfunding platform activities, but they may have not realized that have helped to achieve the UN Sustainable Development Goals using their own way in their own territory. Through their digital platform, people easily help each other to make a better life. People can raise fund through the platform to remove poverty and hunger, to provide good health and well-being for the needy, and to provide help in education.

Most of kitabisa.com crowdfunding campaigns are based on social projects to help people in need. But beside that, kitabisa.com also supports three other type of projects, namely technology, creative, and product innovation. Although kitabisa.com consider itself as a social entrepreneur, it still charges the campaign 5% of the collected funds as fee to develop and maintain their digital platform (except for cataclysm and zakat campaigns).

Timmy's experience and leadership during time his time at the university has helped him to lead and grow kitabisa.com platform. Until now, at the time of this writing as of Jun 2019, kitabisa.com has helped to support the more than 27 thousand social crowdfunding campaigns, distributed 753 billion IDR supported by around 2.5 million of “Good People”. Thanks to Timmy’s leadership, kitabisa.com has become Indonesia’s leading and #1 crowdfunding platform in Indonesia.

kitabisa.com is a social entrepreneur startup that provides a digital platform to make the social crowdfunding campaign become easier and more transparent with better public control and real-time feedback.