Innovative Recycling for a Promising Future

Recycling was created by human beings with a worldwide vision to prevent air and water pollution and prevent the effects of greenhouse gases. It is a process known as one of the three R’s: Reduce, Reuse, Recycle. ECOBOT uses a method that motivates people to stop throwing away scraps in the oceans or places like green areas. As a result of the ECOBOT, pollution and its effects decrease the affects on our environment and the way we live in it.

One of the most difficult materials to recycle is plastic because of its high consumption. We see this as more than the 80% of plastic ends up in oceans. Facing this situation, two siblings from Cali, Colombia decided to come up with an innovative and sustainable idea, called ECOBOT. This new project created a new recycling method of plastic bottles, packages, and bottle caps to help the ecosystem and avoid the pollution caused by plastic's 500-hundred years long biodegradation.

The basis for the idea was considered in 2015 and its official creation was in November of that same year. The first ECOBOT was launched in April of 2016 with the expectation to decrease big quantities of post-consumer products that were reaching areas where they should not be, such as oceans, landfills, and sewerage. When one of the machine ends its process, the collected bottles are donated to recyclers. The collected plastic is then used to make plastic wood for furniture, which ECOBOT uses for its social purposes.

How does an ECOBOT machine work? Easy. First, one deposits a bottle cap. Next, they deposit the plastic bottle in the machine (that can be filled with packages). Finally, the machine gives out a discount coupon that can be redeemed at any of the ally companies in return. Then done! One is now a part of the fight for a better future. 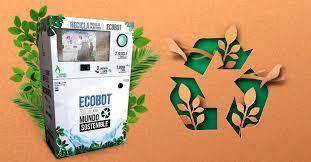 The Co-founder (Santiago Aramburo) and his sister were inspired by their dad, who always told them to innovate and create. He always took into account their entrepreneurship and suggested their pursuits to be environmentally friendly. Ideas were suggested to favor the country and the high capacities and technologies that it possesses.

The original idea came from Germany where the co-founder, Santiago Aramburo was in an investigation trip. Santiago was always open-minded to find any inspiration. When he came up with this idea, he was creating with his sister. It was in Germany where he discovered the reverse vending machines. He told us that he thought it would be a great idea to bring that idea to Colombia, clearly with a different name and approach.

What most inspires Santiago is to change the way we live in this world and to reduce pollution in both the air and water. This is why he says that the main purpose of ECOBOT is to “promote recycling culture” so people can make a difference in our environment and take advantage of it in the right way.

Thanks to the success of the first machines during the company's first years, many more were placed in different areas of the city. Many companies formed alliances with ECOBOT, indicating that this incredible innovation could become even more popular in a lot of other countries. ECOBOT's work is clearly effective as more than two million bottles and packages have been collected in the past few years. The reduction of waste has ultimately reduced pollution as well.

The social and environmental contribution of the company has achieved such a great impact, that today, ECOBOT has a considerable number of employees, users, and ally companies. These individuals believe in the innovation and have even managed to share this as a mechanism of caring for the planet. They have shared with other countries such as Guatemala and Costa Rica. It is expected that in the future, the company will be able to expand into many other countries and benefit even more people.

Throughout the years, people have learned the importance of recycling and caring for our environment. ECOBOT machines have helped further encourage people to continue doing so. How has this benefited the business? Well, the strategy of exchanging plastics for discounts coupons is a great motivation to keep or start people recycling. The growth of awareness in people about pollution and their personal interests about shopping is a great combination so they keep going to these machines. The more bottles and packages that are collected, the more impact the machines have on society and the more recognition they get thanks to their action for the climate. If ECOBOT gets more recognition in other cities or countries, they will not only improve our atmosphere and oceans, but also will keep increasing in number and the recycling process worldwide will never stop.

Another great feature of this company is that it helps and gives jobs to vulnerable people such as the recyclers. Like any other company, employees are required to make an idea or project work. With ECOBOT, many people have relevant jobs such as the job that collects bottles and packages, takes them to recycling centers, and moves from place to place until the machines are empty and able to complete their purpose effectively. Other jobs held and are vital, such as those that make the company work. There are able to be done by those in need. Because of all the actions the company has taken, ECOBOT deserves a lot of respect and admiration. If we are going to mention a good sustainable business that is willing to help the planet both socially and environmentally, this is it.

Like we mentioned before, ECOBOT does not only contribute to our environment, but also to our society. As we know, one of the most relevant social issues is unemployment. With the pandemic, this became even worse, but the company gave the opportunity to a lot of people to be part of the project. In the project, they would be doing something nice for the world while getting resources to live at the same time.

Environmentally speaking, the company applies the 13th (Climate action) and 14th (submarine life) sustainable goals, which are very important current issues in our world. ECOBOT is willing to change that situation of pollution in oceans, rivers, lakes, and in our own air. After all, what would become of us if we had to live with a hundred percent dirty air and the submarine life did not exist or was unable to be eaten. This is the situation that this company is helping to prevent in a future. With all of this recycling, it can be assured that a change can be made. 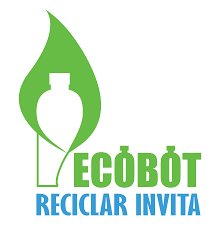 This company helps with a project that is changing the concept of recycling to a different and entertaining method named ECOBOT (A. G Corp S.A.S). The ECOBOT is a machine that encourages society to recycle plastic bottles, in exchange of numerous discount coupons from ally companies, mainly through its bottle cap process. The machine is designed to transform the habit of throwing plastic away that contributes to pollution, and is designed to raise awareness about the importance of recycling. By doing so, the world gets one step closer to what all are seeking, a promising future.