‘Herbivores farm’ grows green vegetables through hydroponics. The crops are arranged in vertical systems to make the most of the available land. They use 75-85% less water than conventional farming. Also, the crops are transferred into different tanks depending on the phase of the crop, this also makes the use of the land more efficient. Minimal use of water and reuse of residual water means less water wasted. Overall this model encourages Sustainable Development Goal 11 which emphasizes improving resources to overcome challenges within urban spaces. Most importantly, this innovation can support one of the targets of SDG 11 that says "By 2030, inclusive and sustainable urbanization and capacity for participatory, integrated and sustainable human settlement planning and management should be enhanced in all countries." This model of farming makes use of sophisticated farming techniques. It discourages the use of pesticides and thus reduces pollution. Further, the plastic packaging that is used needs to be reused by the customer each time he collects his order, thus making sure resources are efficiently utilized. These practices encourage sustainable consumption. As per Sustainable Development Goal 12, sustainable consumption and production are about promoting resource and energy efficiency, sustainable infrastructure, and providing access to basic services, green and decent jobs and a better quality of life for all. One of the goals of SDG 12 is to support developing countries to strengthen their scientific and technological capacity to move towards more sustainable patterns of consumption and production and this innovation resonates very well with this idea.

Sakina Rajkotwala and Joshua Lewis are both Xavier college alumni with no background in agriculture. A visit to Auroville farm made them rethink farming and how it could be done differently. In 2017, they made plans to set up a hydroponics farm in the middle of Mumbai in a 1000 sq ft facility. Though hydroponics is a very old farming technique, it is new to India and Herbivore Farms has become one of the pioneers in hydroponics farming in India. The technique employed reduces water usage by approx 85% with no soil being used in the process. The water used is recycled and supplied again to plants. The farm is temperature-controlled and the produce is free of pesticides. SDG 11 and 12 are closely related to what Herbivore Farms does. Through their zero-pesticide policy, the company is contributing towards sustainable cities by reducing pesticide content in the soil. The waste generated by Herbivore Farms is biodegradable and boxes used for packaging veggies are reused. The company generates minimum waste and can be a model for companies looking to make profits with sustainability in mind. Instead of soil, the farm uses stone fibres to grow vegetables. The seeds are put in small cubic shaped stone fibres and allowed to grow in a vertical set-up inside the room. The vegetables take an average of 15 days to grow which is faster than traditional way of growing. Cultivating in a vertical farm does not take away the nutritional value of the product and they have zero pesticide use, which adds to the nutritional value of the food which typical farm-based vegetables might lack. The farm is situated in the heart of the city resulting in a shorter ‘harvest to doorstep’ time. The vegetables once harvested in this hydroponic farm will take less than 4 hours to be delivered at a customer's doorstep. The food cultivated is hence more nutritious and fresher than food grown through traditional methods. All of this makes cities more sustainable and contributes to responsible production and consumption. The company abides by the motto “cultivate with care.” 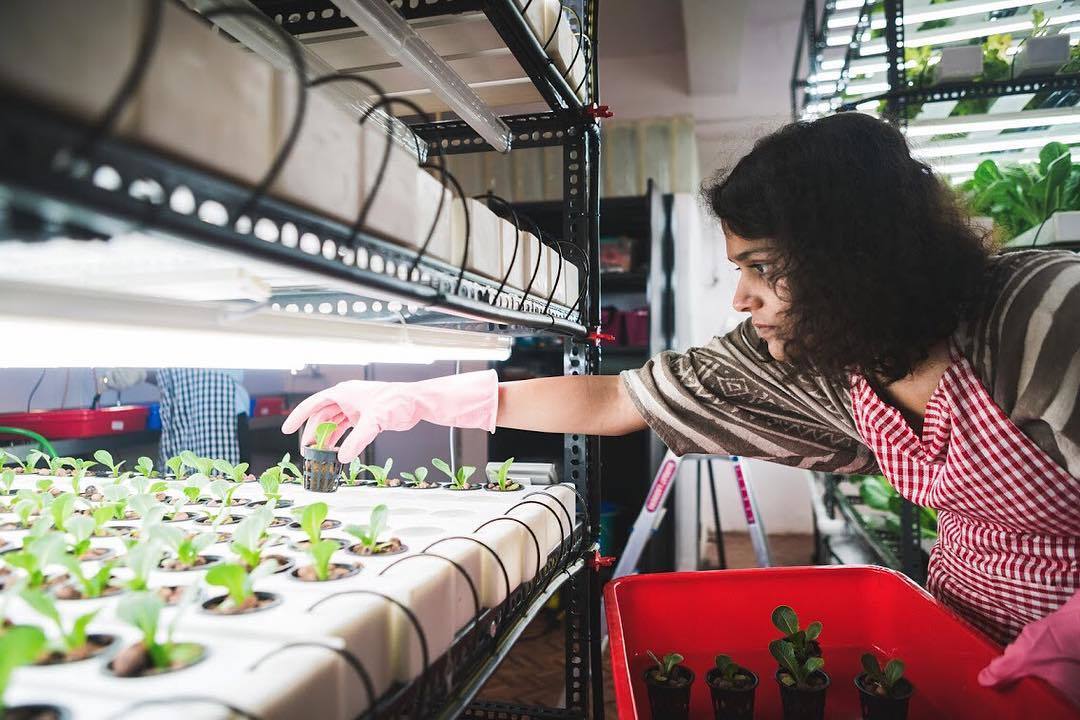 During their visit to the ‘Solitude Farms’ in Auroville, Tamil Nadu, Sakina Rajkotwala and Joshua Lewis, the owners of Herbivore farms were inspired by the practices and the culture followed in the cultivation of farm products. The quality and the freshness of the products they consumed made them realize the importance of consuming fresh food. They decided to imitate that innovative model i.e. take vegetables directly from the farms and consume the fresh produce - but in an urban environment. Cultivation in urban areas comes with its own set of constraints and challenges like space problems, water issues, soil deterioration, etc. To tackle these difficulties, the founders decided using hydroponics was the best choice. The method comprises of a secured germination chamber that utilizes biodegradable stone fibre to germinate plants, a nursery where net cups (little grower) are loaded up with dirt rocks for support, and the frameworks where the plants completely develop.

When asked about the overall impact of their venture, the founders said that Herbivore Farms' innovation focuses on using Hydroponics to provide fresh farm produce to its customers. They grow plants in a controlled environment where all possible parameters like temperature, humidity, amount of light, nutrients etc are precisely monitored and manipulated to aid in the healthy development of the plant. The vertical framework guarantees produce is abundant (vertically stacked plants implies that many plants share the same space). Also exposing the plants to light all through the day accelerates their growth. Sometimes plants are completely formed in less than seven days.

Also, traditional farming involves cultivating plants on the same land again and again which deteriorates the soil quality over a period of time. This, in turn, affects food quality. The plants are grown in a biodegradable stone fibre which eliminates the need for good quality soil to maintain quality.

Water is also used in minimal quantities in the Hydroponics technique which reduces a great strain on one of our vital natural resources. As the plants are grown in a nutrient solution in a controlled environment, there is no need of using pesticides or insecticides which have their own harmful effects on the plant. The produce thus obtained is free from undesired chemicals.

Since the vertical framework is used the amount of yield that can be obtained from a particular area increases largely. The waste that is generated is much less as compared to traditional farming and is completely biodegradable in nature.

Herbivore Farms has hired one employee who has been with the company since its inception. Including the founders, there are a total of three employees. Herbivore Farms is planning to expand in the next 6 months and is open to investment. It is currently based out of Mumbai and is focusing on opening farms and improving the supply chain in Mumbai. They plan to open farms across India. The company through its innovative farming technique has created a new alternative for customers especially those who keep looking for fresh and pesticide-free food. They grow veggies in a temperature-controlled room in a Mumbai suburb. Then the veggies are cut and delivered to customers within 4 hours of harvest, supporting good customer service.

Hydroponics is the technique of growing plants without soil. In conventional farming, soil is one major source through which plants get the desired nutrients, along with the sun & water. With hydroponics, nutrients are fed directly to plants rather than being absorbed by the plants through soil. The major benefits of hydroponics are as follows-

It is an indisputable fact that land available for farming is shrinking. More and more forests are converted to farmlands to meet the growing needs. Hydroponics requires one fifth of the land needed for the same amount of plants being cultivated on farmland. With hydroponics, we can suspend plants in mid-air to save space. Multiple levels of suspended plants with proper plumbing can be used to make effective use of little space.

With hydroponics, farmers have the choice of creating their farms in locations nearer to their target markets and/or distribution channels. This cuts down on transportation costs. This improves the profit of the farmer and cuts down on emissions pollution related to the transportation of products. Thus the overall carbon footprint related to food production and transport is reduced. This, in turn, helps in keeping our environment healthy.

The issue with conventional farming is that when pesticides are used and the soil is watered, the pesticides with the water make their way into water sources, thus contaminating them. Also in hydroponics, there is a central water reservoir, and the water is recirculated. Nutrients are added directly to the water as needed. In fact, hydroponics requires just 10% of the water required in traditional farming.

4. Potentially Better for the Earth and Soil

The land available for farming has been continuously shrinking, due to the scarcity of land, we are now exploiting forests just so that we can keep growing food. With hydroponics, we can tackle these issues as the productivity with hydroponics as compared with traditional farming is much high with respect to same space. Because it doesn’t require soil, this method can also be used in harsh climates with less fertile soil, like deserts.

5. Reduced Use of Pesticides and Herbicides 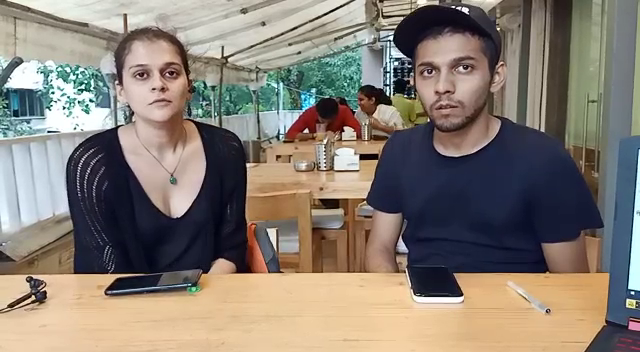 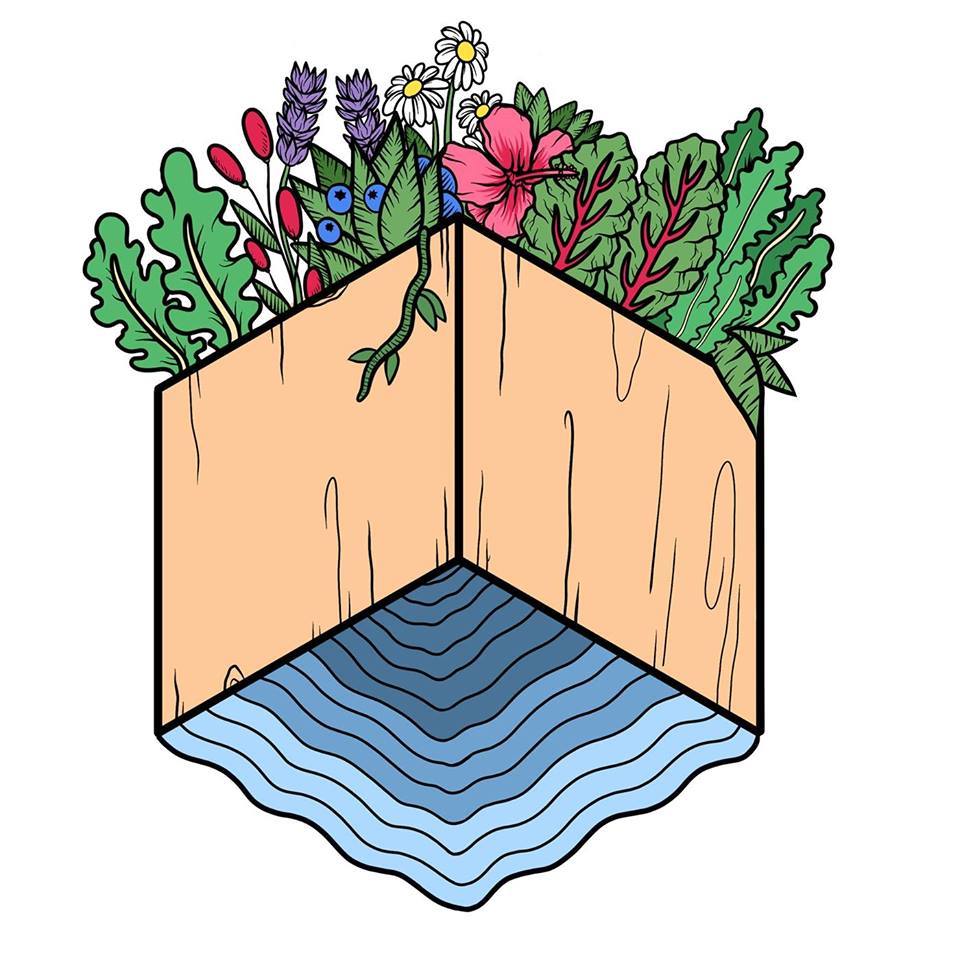 Herbivores farms was started in 2017 with a mission to make farming more sustainable and they are successfully fulfilling their mission by making the most of ‘Hydroponics.’ The farm grows 2,500 plants and sells fresh, organic vegetables to customers across Mumbai. Their business is a home delivery model, with the unique selling point of being able to send produce within a few hours of its harvest. They make sure that customer gets the best of freshness, nutrition, and flavour. Considering the fact that people are looking for fresh and nutritious ingredients in food these days, this idea has a huge potential for profitability. They operate 9 hours a day, 7 days a week from their farming warehouse in Mumbai. A room of less than 1,000 sq ft produces over 1,000 plants. The climate within the greenhouse is artificially controlled, so the crops are protected against the weather outside. Hydroponics doesn’t use soil to grow plants, and instead uses macro and micronutrients dissolved in water solution to support plant growth.