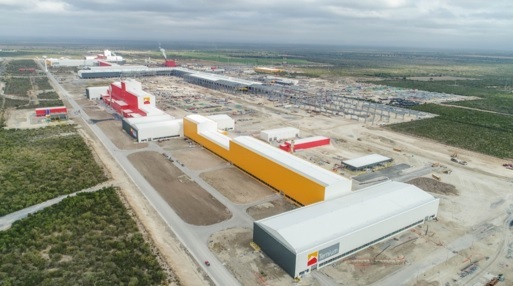 Ternium has been investing in Mexico since 2005 and its newest investment (Over 1 Billion USD$) is a Hot Rolling Mill which is a 100% sustainable and Eco-efficient integral investment from its construction and in its operations. It will start running in June 2021 in Pesqueria, Nuevo Leon, Mexico.

There are few opportunities in the world for building a Steel Hot Rolling Mill from scratch, and Ternium is taking this chance to make an 100% sustainable investment from the beginning (its construction), using the best available technology in terms of environmental care and operations, taking in consideration several UN’s Global Goals for Sustainable Development, such as “Renewable Energy”, “Climate Action”, “Good Jobs and Economic Growth”, “Industry Innovation and Infrastructure”, “Clean Water and Sanitation”, “Responsible Consumption” and “Renewable Energy”.

Any Hot Rolling Mill requires a large quantity of water to operate. This installation has been built with a water treatment plant that is fed with sewage from the city. This investment, will save 765 m3 of water per hour. In addition, a rain channel has been built to prevent rainwater from mixing with treated water when it is discharged into the river that runs very close to the plant.

Also, through efficient combustion technologies, the Hot Rolling Mill will be using the minimal quantity of natural gas to operate and a recycling system is established in all Ternium plants to reduce the use of energy and raw material supplies.

Roberto Rocca was a visionary who dedicated over 50 years to create what today is Techint Group (where Ternium belongs to), promoting and driving investigation and technology, committed to both industrial development and social responsibility. Mr. Rocca demonstrated a deep engagement and accountability to establish and pass along values, development, and wellness to the community.

The metropolitan area of Monterrey Nuevo Leon, in northern Mexico has always been land of big industries and the steel industry is one of them. Mexico is diverse and rich in many aspects, but Monterrey was a turning point in the economic development of the country. This city is where the development of the country started in the late 19th century, as industrialization process started with the textile industry, followed by the founding of a brewery which needed glass, cardboard, among other supplies made in the same area. By the year 1900 “Fundidora Monterrey” was founded, it was the first integrated steelworks plant in Latin America.

Between the years 2005 & 2007 Ternium acquired the two biggest steel companies in Mexico (Hylsa & IMSA) both located in Monterrey, becoming the biggest steel producer in Latin America. Since then, Ternium has been investing in Mexico, in the Monterrey area mainly, over $3 billion USD in several projects and the newest one is the Hot Rolling Mill located in Pesqueria, Nuevo Leon, Mexico, within the Monterrey area.

Mexico is a country with a steel deficit, that is, not enough steel is produced in the country to supply local demand, therefore imports are essential to meet the requirements of local industry. Therefore, Ternium's investments in recent years have been focused on being able to supply the steel industry made in Mexico to substitute imports.

A new hot rolling mills is part of Ternium's newest investments and since its beginning, the idea was to make it completely sustainable. The company understand 2 things in a very clear way:

1) A hot rolling mill is an investments for many years, therefore it is important that this project can be immersed in the community and its environment forever.

2) The industry global standards are meant to be this way, to make sustainable investments. Ternium is a leader in the world steel association and wants to send a message to the whole industry on how things should be done since the very beginning of the project.

This important investment has transformed this region into a regional industrial cluster hub. Ternium’s new plant, improves drastically Mexico’s quantity and quality of steel production. The environment was one of Ternium goals when planning the new plant by incorporating the UN’s goals for sustainable development into the plans, with better water usage, a more efficient energy consumption and by using sustainable and recycled supplies. Socially, the plant has reversed human capital flows, by becoming an important talent attraction area.

Ternium’s plant should become a national benchmark for sizeable sustainable investments by balancing the human, economic and communitarian requirements needed for any modern development.

The new Hot Rolling Mill in Pesqueria will have the capacity to produce 4.8 million tons of steel per year and will provide the local industry in Mexico significant technological upgrades to expand Ternium’s product range with a broader dimensional offering and the most advanced steel grades. This signifies an increase of 25% of the current hot rolled steel capacity for Ternium Mexico.

This investment will be targeting the demanding and innovative automotive industry, as well as the home appliance, machinery, energy and construction sectors.

The Pesqueria location in the Monterrey area (North East of Mexico) provides a strategic site to reach with high efficiency key destinations within Mexico and North America by rail, freight or even by vessel (500 km from the nearest port).

Pesqueria used to be a very poor town dedicated to the cattle raising and its people used to leave their town to move to work to Monterrey City or even emigrate to the United States looking for job opportunities.

The Ternium projects, including the new hot rolling mill, not only generated new jobs in Pesqueria that gave people the opportunity to stay in their town, but also made other big companies such as KIA Motors, establish in the same area, reversing the flow of people, so that inhabitants from Monterrey and other towns come every day or to work in Pesqueria.

This economic development resulted in positive externalities in the area, as new quality roads, housing developments, new schools, hospitals, were built, improving the quality of life of the people within the community.

Steel production through sustainable inputs and usage of energy without ignoring the environment is the best way of balancing production activities and nature’s wellbeing. Ternium Pesqueria’s industrial center consists of 437 ha, 99 of which were used to establish a natural reserve. Over 32,000 flora and 681 fauna individuals were rescued in the construction area.

Ternium’s new Industrial Center is the first flat product plant to achieve LEED certification of environmental sustainability in the country.

With an investment of over $1 billion USD, solely in this new hot rolling mill, the economic development of the local communities is benefited. Over 5,000 employments were created from this project construction and local workers where the base line for this development.

These new jobs generate further investments, both from other private companies that see beneficial consequences for installing nearby and government investment for improving the regional infrastructure.

Ternium is a leading company in the Americas that manufactures and processes a wide range of steel products using the most advanced technology. With 17 production centers in Argentina, Brazil, Colombia, United States, Guatemala and Mexico, we manufacture high-complexity steel products that supply the main industries and markets in the region.