Holding the Future in Our Palms

Since 2014, when GAPROTECH was first invented, the team behind the invention has continued to radically grow the innovation from an initial zero-emissions processing plant that received palm fruits from surrounding areas and produced oils and kernel juice, into an integrated system that is transforming the entire palm supply chain in the communities where it is being rolled out in the Ashanti Region of Ghana.

GAPROTECH is a distributed platform for processing palm fruits in a cradle-to-cradle manner, starting right at the farm gate as portable crushers, extracters, and clarifiers, and comprising the full set of elements needed to ensure the socially equitable and sustainable generation of wealth from palms cultivation: from a fair-wage outgrower scheme to an active R&D program to harness every part of the palm fruit. One of the promising results of the latter initiative is the use of a novel integrated pest management program that converts palm larvae and similar organisms traditionally regarded as vermin into protein compounds for food fortification schemes.

The inventive power behind GAPROTECH is evident also in the cost performance of the system. The distributed processing platforms placed at the farm gate are 50% cheaper than comparable platforms imported into Ghana from China, with throughput savings shared by all major actors, farmers and distribution network agents most especially.

The yield improvement management techniques employed at outgrower farms involve integrated composting and pest management, enabling a near cradle-to-cradle production system, with farmer motivation sustained through guaranteed farm gate uptake of harvests for processing. The overall schema aggressively reduces the water and energy intensity of the entire chain. The just-in-time distribution of processed palm products allows the use of lower emission transport equipment, and is highly favoured by small and medium scale industrial operations in the surrounding communities. 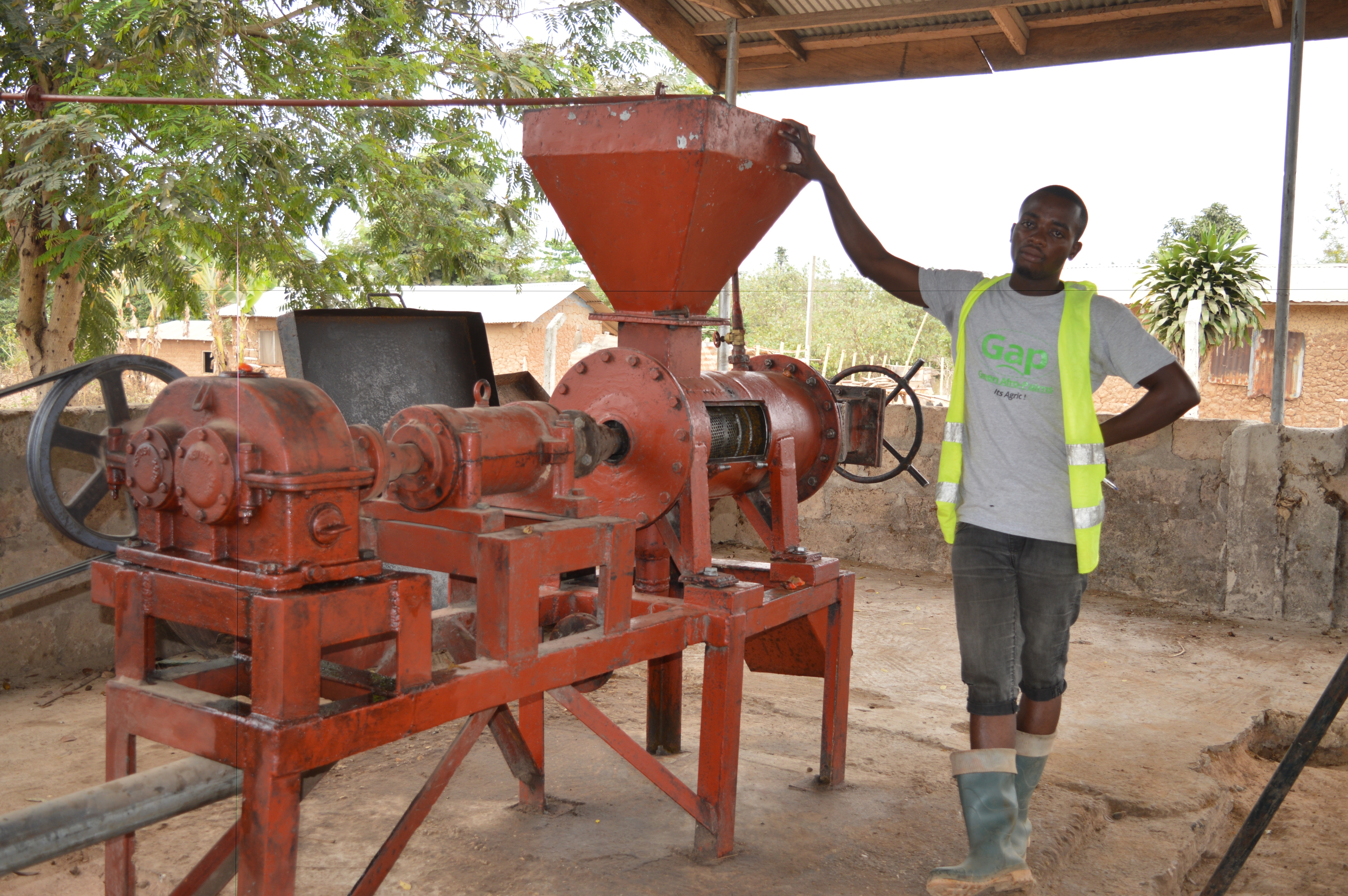 Kwame Ababio, the founder of the social enterprise and inventor of GAPROTECH, read Engineering at the University of Mines & Applied Technology in Ghana. He is a trained engineer with a fundamental interest in how the subject of engineering can be used to solve problems for the benefit of society.

Throughout his childhood, he had an abiding interest in solving problems, an attitude that shaped his engineering education and post-graduate explorations.

After working with some industrial concerns as an operations engineer, he became concerned about the sustainability challenges of depletive mining and other land use practices.

He said, “Whilst I was fascinated by the technical intricacies of the sophisticated technologies used to mine the minerals, and this fascination provided the initial spark of the desire to become an inventor, I sensed a moral hole in my heart about the social dimensions of all this powerful ingenuity. I was committed to provoke clever change.”

The founder set up a virtual platform to build a community of inventors and innovators with an engineering background in Ghana, and once a team coalesced he invested his savings into the GAPROTECH initiative.

As GAPROTECH scales steadily in three adjoining sub-districts of the Ashanti Region, its impact has been visible and palpable.

As many as 7,500 palm trees have been restored to health through effective husbandry and 150 smallholder farms networked into a tight ecosystem that is reclaiming stressed farmland in these communities. All of these ecologies were at a severe risk of collapse at the onset of the initiative.

The impact of "slash and burn" farming in many such communities in Africa is frightening, with the rate and pace of desertification currently at a level past crisis point and now approaching the catastrophic. Despite its massive economic potential, oil palm remains one of the most severe contributors to desertification, water depletion, and biodiversity trauma.

GAPROTCH's direct contribution to the reclamation of stressed land for the sustainable cultivation of palm using regenerative methods of farming, whilst assuring farmers of decent farm gate prices, has thus transformed the lives of at least two thousand families within these farming communities and the broader distribution network.

In the long-term, the husbandry techniques being promoted, the integrated agro-management techniques steadily being introduced, the fair-payment schemes for produce sourcing, the local provision of industrial work, the steady progression to zero-waste, and the nutrition-related R&D (under way, provided sufficient capital is attracted) should become the dominant template for integrated agro-industrial development in the West African hinterlands.

With minimal input-investments, GAPROTECH attains a throughput of 750 tons oil palm yields, which converts to 100,000 litres of processed oil palm, 1,666 bags of palm kernel nuts and fibres, and directly creates 100 new jobs with 30 being paid directly by the social enterprise.

Smallholder farmers earn a monthly average of about GH1000, upon admission to the GAPROTECH scheme, a 330% boost in earnings. The reinvestment multiplier effects have massive implications for the eradication of child labour and the professionalisation of agricultural labour, which circularly advances the company's business objectives.

The social enterprise benefits massively from the strong supply chain security that this innovation has facilitated, and the cost performance indicators all point to strong competitive advantages and highly favourable positioning in the market for palm derivatives as a result of the integration successes achieved.

One of social enterprise's field officers indicated that, “I sometimes ask why [the founder] didn’t use his money to invest in merchant trading for extreme profits, but his decision to invest in oil palm supply chain transformation got me a job. If someone like him can set up this initiative to provide someone’s daily bread, then he needs to be supported with all our heart to continue growing this business. That's why we are so proud to work for him.”

• SDG 1: No Poverty – the social enterprise directly employs about 100 people, including contract labour, which in effect is helping eradicate poverty and improving the livelihoods of young people as well. Such strong employment growth is highly unusual for entrepreneurial ventures in most parts of Ghana.

• SDG 2: No Hunger - The enterprise is implementing modern agro-tech and supply chain optimisation to ensure an upward shift in productive yields for staple oils, processed kernels, and fibres. Current estimates suggest 45% uplifts are sustainable. Its early work in the research and development of insect proteins as part of the integrated pest management approach should also provide a major boost to nutritional health.

• SDG 5: Gender Equality – About 75% of the enterprise's workforce have been women, with the conscious effort to provide equal platforms for the marginalised women that make up 60% of African smallholder farmers.

Whilst work is still ongoing to quantify the water-energy nexus impacts of the GAPROTECH system in the communities, the prima facie evidence suggests considerable environmental footprint mitigation impact. The enterprise and its technology are deepening partnerships within the ecology, ecosystem and supply chain, which are difficult to measure rigorously but should nevertheless impact on several SDGs. 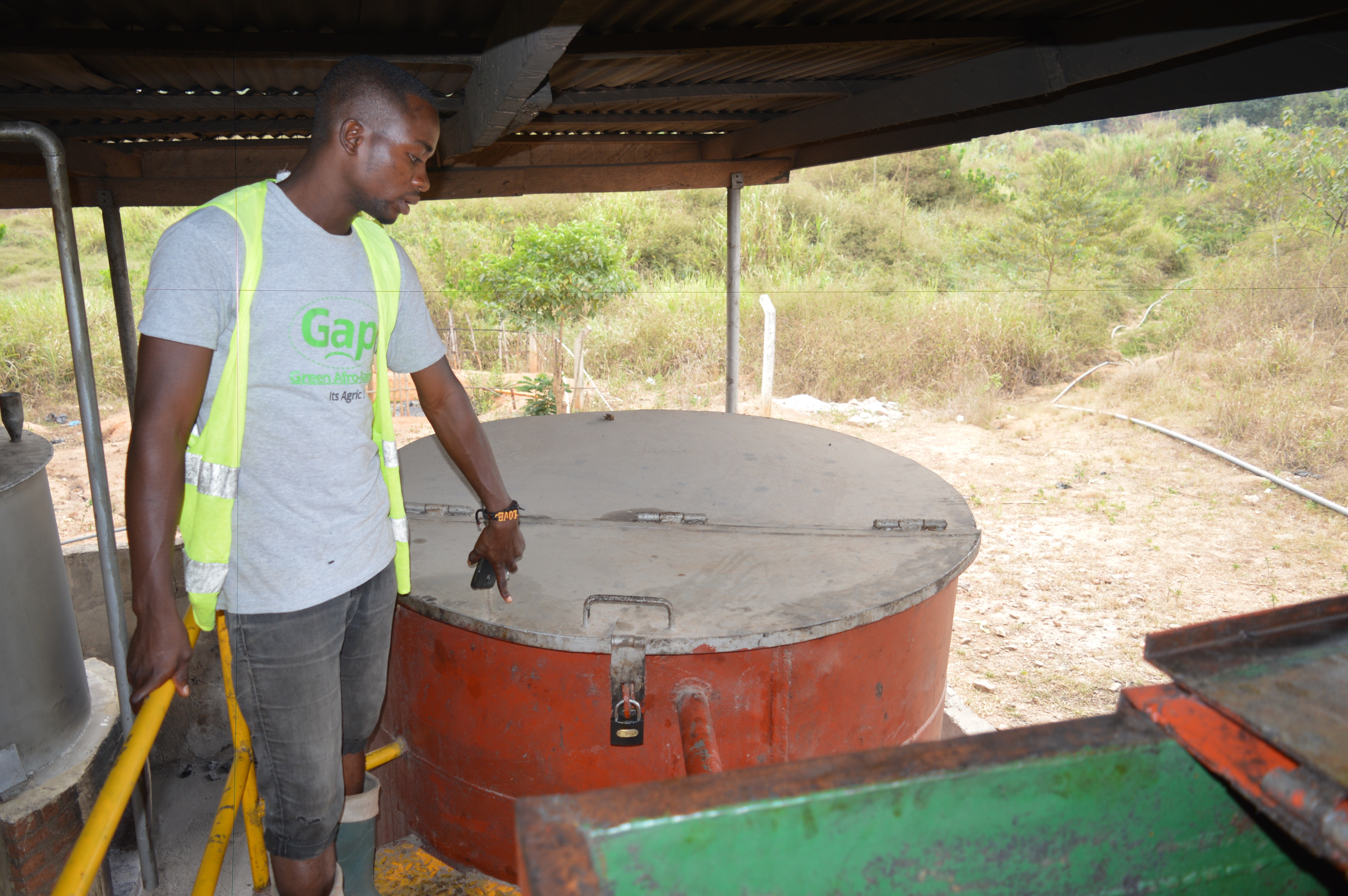 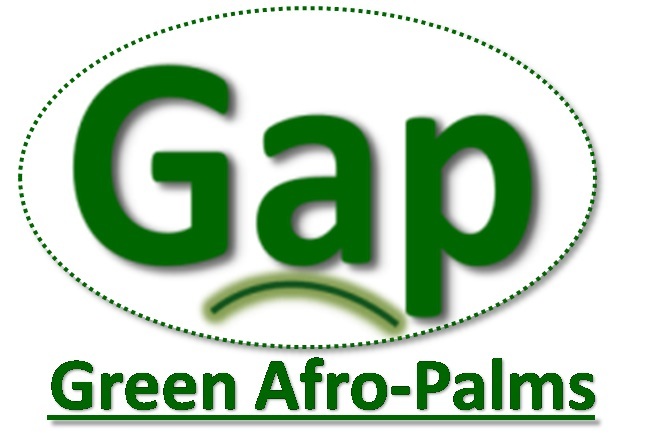