Redheart helps curate meals for Americans across the country and does the legwork in finding the optimal amount of macronutrients and micronutrients that put an end to increasing obesity rates. Put simply, this company helps achieve the 2nd UN SDG to end hunger, achieve food security and improved nutrition, and promote sustainable agriculture. Redheart checks this off without a doubt as they directly combat an ongoing and deadly pandemic across the globe: obesity. Redheart achieves the 3rd UN SDG to ensure healthy lives and promote well-being for all at all ages through working towards implementing education programs in elementary schools over the coming years, noting that the best way to bridge the gap in education on nutritional-based topics is through education (especially when dealing with rapidly adaptable minds in younger generations). Even more, the company achieves the 17th UN SDG as they look for partnerships and mentors in the groups and/or individuals who see eye to eye on their values and moral mission to make the world a better place in whichever way their company can.

The budding health & wellness company sells healthy bowls, curated with rice, a number of vegetables, and an option of tofu or chicken depending on preference and dietary restrictions. When creating another item on any menu, chefs need to consider the cost and budget companies and restaurants have to bring such ingenious thoughts into reality. Co-founder of Redheart, Danny Lee, notes that they, "had a lot of restrictions in terms of food cost, packaging, etc. so we had to figure out some concoction that checked all our boxes in regards to macro and micro nutrient balance as well as meet servers' requirements." Co-founders, Michael Zhou and Danny Lee, both note that for the short-term, they set out to create better quality foods and alternatives for folks heavily involved in fitness, but they also noted that they are specifically "going after the standard American diet, because, right now, the enormous number of people who have diet related diseases resulting in seriously declining health are not all educated [on these sort of topics]." Redheart aims to bridge the gap between curating great tasting food for its customers while also developing a greater tomorrow by including the right amounts of each nutrient into each of these meals. The co-founders noted, "we almost want to fight the standard American diet by giving consumers something that tastes good and something that doesn't make people even think that they're dieting." This ingenious solution checks off everyone's boxes, as a large part of the reason many Americans indulge in sweets or incredibly unhealthy, fatty meal options is because these things 'taste good.' Michael and Danny directly saw the impact on Americans' health, referencing their own experiences in seeing a massive amount of obese individuals across the Cleveland area itself, where the pair attend Case Western Reserve University. 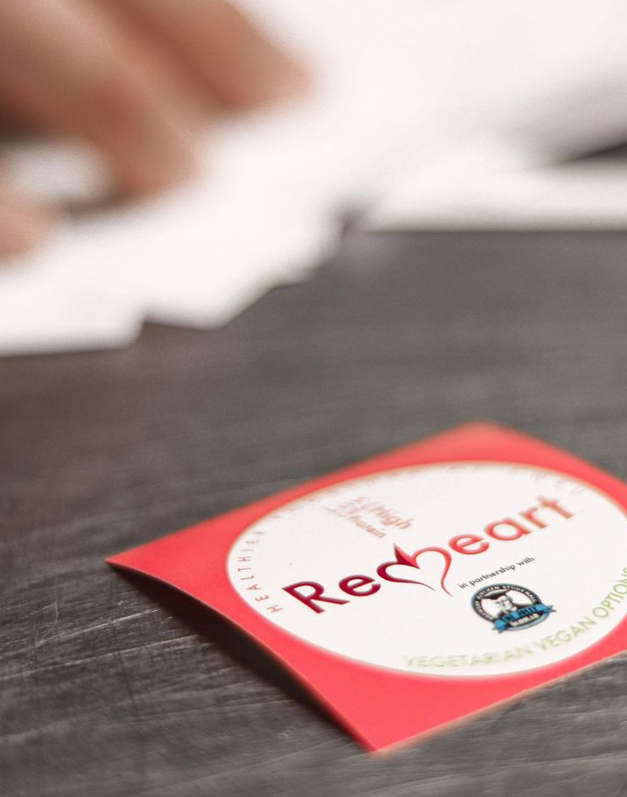 Stickers promoting the Redheart brand, available across the CWRU campus

On the warm summer night in Cleveland, OH, on August 24, 2021, Michael and Danny shared frustrations about being confined to a rather stressful future path that neither one of them previously thought to think otherwise about. Danny was on the pre-med track at CWRU, while Michael was pursuing a career in high-finance, perhaps even an entry position in venture capital. Michael, Danny's suitemate and best friend at the beginning of their third year at CWRU, "went into Danny's room, and he pitched [Michael] the idea." This camaraderie is very unique and highly commendable, as the two are known to be highly considerate of their own fitness on campus, and known to be incredibly supportive of one another even prior to the conception of Redheart. It was only natural that they put their minds together and conceived a business model to combat a problem that highly motivated them to differentiate themselves every single day in the gym, as well as inspire others to boost their own knowledge of the movement. Danny mentioned that he has had the idea since he was 17 years old, but never thought to consider it seriously on the grounds that other competitors would soon surely flood the market and make it far to competitive for Danny to enter. Michael, known to be the business mind between the two, took on the challenge and together they were able to create an experience for their entire university to be more health-conscious, either deliberately or unintentionally. Either way, the more students consumed Redheart's products, the further along the company was to succeeding in its battle against obesity in America.

The short-term effects of this business and their products were specifically impressive, and included boosting awareness through word of mouth. By creating a strong brand recognition, through the company mission, campus involvement, or through both co-founders' own personalities, Redheart was able to inspire more people to begin thinking about more conscious consumption in ways that would only benefit the consumer. This was especially clear as followers on social media platforms skyrocketed after only a few months in business, as well as direct feedback from satisfied customers. In the longer-term, the co-founders clearly have quite the agenda, but are indeed taking every measure to ensure its probability of success. Danny noted that they are trying to "put through certain criteria in the Redheart model. [They] actually put this criteria through an 8-week trial. On one of the returned blood work results reports, this particular participant had hypertension, was pre-diabetic, was at risk for cardiovascular disease, as well as at risk for chronic kidney disease. By the end of our 8-week trial, all of their symptoms were gone." This is an incredible progression through battling not only obesity but the health of a variety of avoidable diseases that could even be fatal in dire situations. The two even noted that the company has no intention to tell its consumers not to eat certain foods to prevent these diseases and declining health conditions, but rather incorporate a balanced collection of macronutrients and micronutrients into their diet (to offset anything else they may consume in the long run), if anything. On the aforementioned case in which the patient beat several horrible situations, Redheart only recommended the patient eat two meals from Redheart each week, over the 8 week period. Even with a small amount of increased balance, Redheart was able to help this patient avoid a number of issues. This company clearly has the potential and capacity to change so many more lives in countless ways.

This product (the healthy alternative rice bowl) creates new avenues that the entrepreneurs can decide to take, and opens many new paths towards funding. Testing their initial products on friends and family for taste, their first customers were actually CWRU students who ordered from the Jolly Scholar, a restaurant here on campus. These tasty yet healthy meal options are unprecedented within the meal plan here at CWRU, and allowed Redheart to build a brand relatively quickly. This naturally opens up new avenues for funding, and even more directions to run in given the proof of concept on a viable college campus.

Co-founder, Michael Zhou, decided to join Danny on this journey upon conception largely since he realized where the fitness industry was going, and the untapped market surrounding Danny's idea. Michael noted, "According to the CDC, 51% of Americans are going to be obese by 2030," and the gradual process even seems almost expedited in Cleveland, OH, home of the CWRU Spartans. With various athletic programs accessible to students, and college life with a non-competitive, contracted catering company looming in the background, this setting provided a perfect ground for both conception and execution of Michael and Danny's business model. Within weeks, Redheart began to gain traction within the community, and the entrepreneurs began to realize just what massive impact they were having. Continuing the business further, possibly expanding in the future, will no doubt benefit society by educating those who may not have had the chance to learn about nutrition and the impact of the food they typically indulge in.

Redheart aims to create meals for consumers across the nation that fit a certain macronutrient and micronutrient profile, which are catered to the optimal fitness/nutritional value goals for the average American. Redheart hopes to bring something new to the health & wellness industry, and they achieve this by developing their own products that fit budgets and pair varying nutrients with one another to create synergies.