By the end of 2018, the organization decided to innovate and start a project to generate self-consumable electric energy from solar energy in two incubation plants. 998 floor panels were installed for the incubator in Sabanalarga, Barranquilla, and 1,365 floor panels for the incubator in Flandes, Tolima. This project was carried out in those geographical locations because they had the ideal climate conditions for the transformation to solar energy.

Companies in the poultry sector are known for generating very high energy consumption levels; San Marino has an approximate consumption of 150 thousand kilowatts per month in only one of the seven incubators it has. For this reason, the organization decided to innovate and initiate a project to generate self-consumable electric power from solar energy in its hatchery plants, which was launched at the end of 2018.

The project was carried out in two incubators, as these had the ideal geographical characteristics to maximize the use of solar panels and energy transformation. In the Tucumana incubator in Sabanalarga, Barranquilla, 998 floor panels were installed, each one of 350 watts, being a project of 327 kW of power for self-generation of electricity, and on the other hand, in the Flandes incubator, Tolima, 1,365 floor solar panels were installed, being a project of 429 kW. This project represents a total power generation per year for the organization of 472,000 kW in the Tucumana incubator and 678,300 kW in the Flandes incubator. 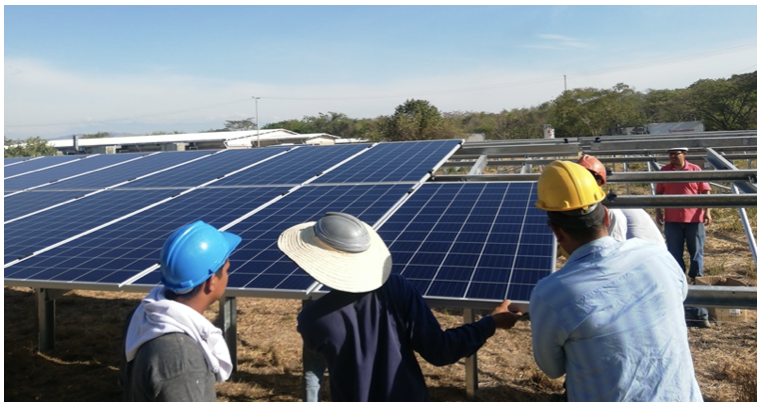 This project was born thanks to the objectives and vision of the president of the board of directors and owner of the company, Alberto Carbone, who, for several years, had been seeking to explore the processes of self-generation of energy with renewable sources. This vision, and the great advantage they had in their favor, having the incubators in a geographical position with a high level of solar radiation, approximately 5 kilowatts per square meter, was what set the project in motion. So, it motivated the development of this one, having the possibility of obtaining a benefit of its conditions for energy generation.

This project was not only led by the owner of the company but was carried out through teamwork between Italener, an energy marketing company that is part of the Italcol business group to which San Marino also belongs; the maintenance and production managers of the two incubators; and San Marino's general management.

Working hand in hand, Italener was the main responsible for the project in its development, from the conceptualization and engineering, to the construction and start-up.

This project has had good results and has generated motivation in the company to start 4 more similar initiatives. It has also generated a good image in advertising and environmental awareness that leads to new projects in development. As San Marino is part of the ITALCOL group, it has generated an example and motivation for the other companies of the group to consider installing solar panels for the generation of renewable energy.

As for the impact on the environment, this project generates a reduction of CO2, which is equivalent to planting 26 trees in Tucumana and 41 trees in Flandes (the reference tree for these equivalents is the pine tree, which has a high capacity to capture CO2). This is reflected in a reduction of 140.66 tons of CO2 per year in Tucumana and 202.15 tons of CO2 per year in Flandes, which are significant quantities. This project was achieved because these locations have excellent solar radiation, and this is a source of self-consumable energy from solar photovoltaic energy.

Moreover, the organization decided to innovate and initiate a project to generate self-consumable electric power from solar energy in its hatchery plants, which was launched at the end of 2018, which differentiates them from the competitors.

Finally, it is important to emphasize that there have been important short-term effects, mentioned above, of reducing energy consumption and CO2 emissions and a significant decrease in costs without any change in productivity or the general operation of the mentioned incubators. In the long term, it is expected that these reductions in emissions and cost generation will continue to be reflected on a larger scale and can be reinvested in the company at a later date, either in plans or in the four similar projects that are being considered. Moreover, it is planned to increase the number of solar panels installed, which would generate 9 megawatts (currently, the two plants are 0.7 megawatts). The potential is huge towards the growth of these projects.

As for the impact on the environment, this project generates a reduction of CO2, which is equivalent to planting 26 trees in Tucumana and 41 trees in Flandes (the reference tree for these equivalents is the pine tree, which has a high capacity to capture CO2). This is reflected in a reduction of 140.66 tons of CO2 per year in Tucumana and 202.15 tons of CO2 per year in Flandes, which are significant quantities.

The impact generated by the implementation of this project is evident in the need to adopt these projects, which different ITALCOL groups want to have. It is an important impact since it generates a reference point and shows that, besides generating significant reductions in energy consumption, there is a huge cost reduction that generates a benefit for the company and the environment and society. Moreover, the client is consuming a product made/ grown with sustainable practices, which is a critical factor when deciding which products to consume and which not to consume. In general, the population is more and more conscious of the environmental damage that is being generated. This problem is due to the products that we consume daily.

Agroavícola San Marino is a Colombian company that makes part of the corporate group ITALCOL in the primary sector of livestock. It has more than 2,000 employees and is dedicated to the production and commercialization of chickens, raising of commercial layers, fry, chicken carcasses, the sale of veterinary medicines of the Aurofarma line, the production and sale of fertile eggs, and the sale of poultry sub-products such as chicken manure, chickpeas, and commercial eggs.

All of the above are strategically distributed in 3 regions around the country to guarantee the quick delivery of the product in short distances, to avoid the bird from suffering stress, and to deliver it in the best conditions to the different departments nationwide where San Marino is present.