Handmade Baskets For A Better World

Handed By is a flourishing organization that produces and sells sustainable, high-quality, and socially responsible products, i.e., braided baskets, bags, and home accessories. Their products are not only made from recycled industrial material but are also reusable and produced fairly. Besides reducing the waste mountain, this company is very dedicated to the people involved in the company. They continually strive to raise their standard of living and to contribute to their development.

Seven years ago, Pim and Noortje Witteveen took over Handed By. Their business innovation is, according to Noortje:

"Unique, hand braided, baskets, and bags to develop, with qualities that put as little burden on the environment as possible, by working honestly with braiders that can raise their standard of living."

When they took over the company from its previous owners seven years ago, they decided to make it a sustainable, high quality, and socially responsible brand. Their range of products consists of braided baskets, bags, and home accessories made of 85% recycled material recycled again after use. In 2021, they want to produce and sell products made of 100% recycled material.

This business innovation supports the company's culture of well-being and success for everyone involved in the company, all thanks to the owners' quantum leadership. They help workers from the Far East and people in the Netherlands. They help refugees with their integration process and students who do not yet know what they want to do with their lives. The owners feel very attached to their employees and strive to raise the quality of life for each person involved. That’s how everyone feels good and inner well-being is created at Handed By. There are currently fifteen people working in the Netherlands and 350 families in both China and Vietnam.

“ We truly believe it is important to help people,” as Noortje said.

The driving force behind their business innovation is their goal. "We strive to deliver uniquely designed and handmade products through socially responsible production. Our ambition is to create a lasting impact on our immediate environment and sustainability to benefit the environment. To achieve this, we always strive to use the most sustainable materials and support those involved in a higher level of education and living standards," recounted Noortje. 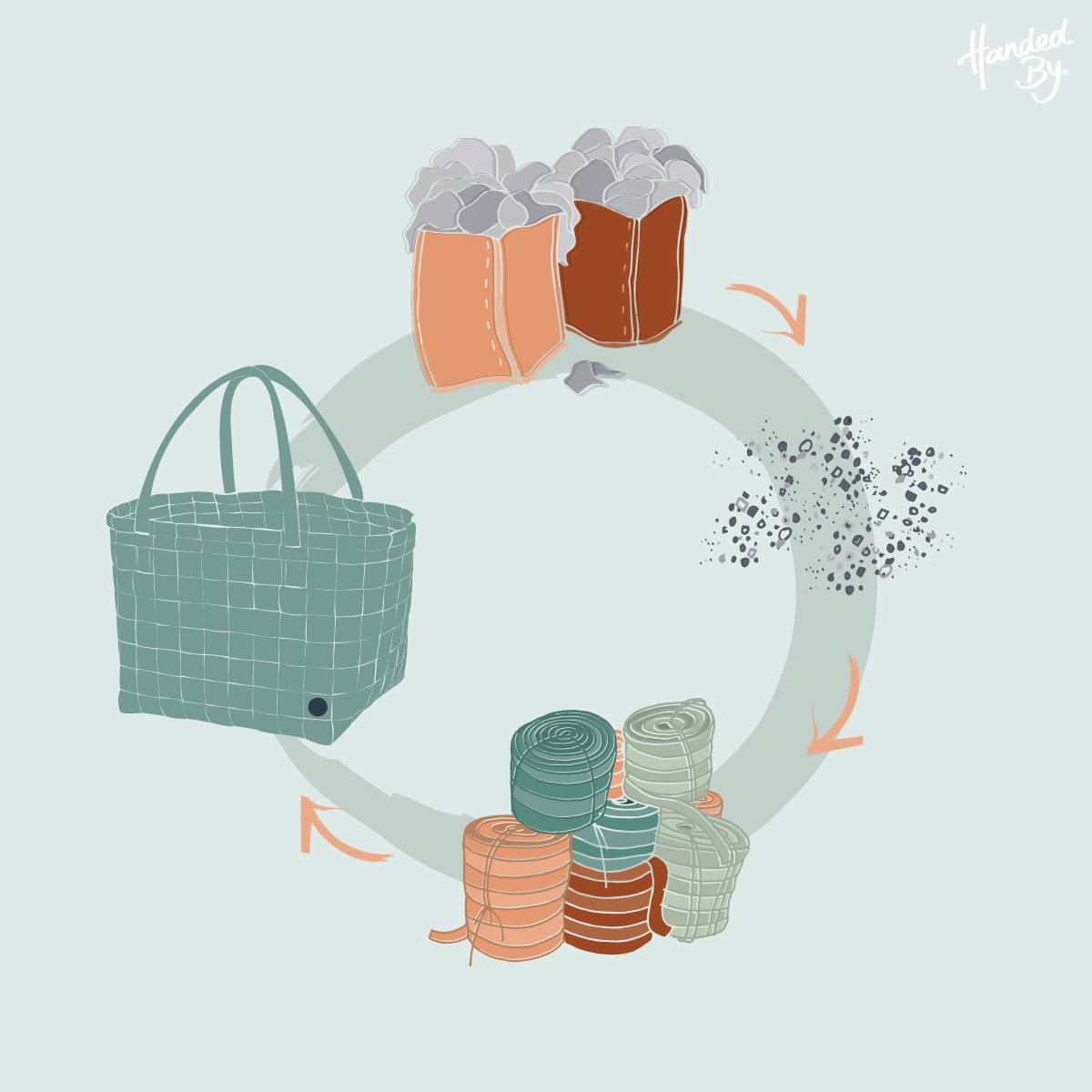 The previous owner of Handed By was mainly inspired by the basket weavers he saw during his travels to the Far East.

Noortje mentions that “he saw a basket made of a material you wouldn't expect. He took it further and used it in a very creative way. That has been the base of Handed By.”

He was inspired by these people and the materials that were being used there. So he wanted to keep this idea going. The current owners, Noortje and Pim, were motivated to take over this company. The valuable stories that were lying in the background of Handed By’s products inspired them. When Noortje and Pim traveled to these countries in the Far East, they saw that most people could not afford a decent living. Thus, they decided to build up this business innovation to do good for those people and the world. By striving to reduce damage and be willing to make a net positive contribution to both society and the environment, Noortje and Pim were passionately driven to transform this organization into a flourishing one in which the wellbeing of each counts.

Handed By’s innovation is truly remarkable and has an important impact on many levels. For a start, all their products are made from materials that have a minimal impact on the environment, such as recycled plastics, recycled industrial waste, and bamboo. The use of recycled plastic in combination with high-quality, made-to-last products results in a net-reduction in plastics. In this way, Handed By intends to tackle the global waste problem.

Aside from using environmentally friendly materials, Handed By’s unique way of employing skilled local weavers in countries like China and Vietnam impacts hundreds of families' lives for the better. These weavers work from their homes under healthy and hygienic conditions and receive a fair wage for their work. Handed By provides these families with an opportunity to make some money on the side, which gives them access to basic needs, such as health, safe housing, and education. In this way, Handed By seeks to tackle the global poverty problem.

On top of this, Handed By guarantees a 100% free of child labor production process. They do this by giving women real income so that they can send their children to school. This positively impacts child labor in a twofold way: they prevent children from working in the present and allow them to get a decent job in the future, hopefully reducing their children's need to engage in child labor. As a result, Handed By’s business innovation can be called a radical innovation that combats the global problems of waste, poverty, and child labor.

The impact of Handed By’s innovation does not stop there. Handed By tries really hard to create a meaningful and productive work environment in the Netherlands. For example, they hire students who are experiencing difficulties with school or immigrants who want to improve their Dutch. They truly want to improve the welfare of everyone involved in their business.

Handed By is, therefore, a flourishing organization in all aspects. They do not only reduce their damages but, above all, contribute to a better world by creating a net positive impact. They do this by providing their employees with a basic income that enables them to meet their daily needs and have a chance for education. By doing so, they aim to eliminate child labor and poverty. Besides that, Handed By strives to harm nature as little as possible by striving to produce 100% recycled plastic and, thus, fighting the global waste problem.

This business innovation brought several advantages for Handed By itself. Handed By works with braiders in Vietnam and China. This ensures that they have international relations as a company. Due to this business innovation's success, Handed By can sell its products abroad, namely in Germany, France, Great Britain, Austria, Denmark, Sweden, and Lithuania. In this way, Handed By grew both on a national and international level. In the future, they want to expand their activities even further by selling to other countries. They also plan to expand the group of 350 braiders, which will allow more people and, therefore, more families to increase their prosperity by braiding for Handed By. That being said, this business innovation is potentially scalable, as it seems achievable to extend it to other and bigger parts of the world since Handed By has already partially grown at the international level.

Pim says that "we believe that being active internationally is also a fundamental goal not only in the Netherlands and Belgium but also in many other countries. We want to take our story to other and larger countries as well".

Because Handed By uses recycled plastic, it reduces its waste mountain. This creates a good impression on the outside world and improves the company’s reputation. In this way, Handed By attracts an added value and ensures growth, which has resulted in a healthy cash flow position, allowing Handed By to further invest in product development, production, and perception of the brand and products.

#I think that now about 85% of all our products are made of recycled plastic. So we are now working on building up the last 15%," reflects Pim.

Due to this business innovation, Handed By distinguishes itself from the competition. The combination of their business innovation, together with the products they offer and the story they carry, ensures that Handed By runs several steps ahead of its rivals. At the same time, this Business Innovation also led to a 50% increase in revenue and higher profits. As Pim said, "if you look at someone who does almost the same thing as us, we actually have very little competition.“

Handed By has workers in the Far East, as well as in the Netherlands. A large portion of their employees works in Vietnam and China. In these countries, the majority of people are unemployed and barely earn anything. This also means that most parents in these countries cannot afford the education of their children. That's why, through this business innovation, Handed By focuses on providing a livelihood for its workers. This ensures that their employees are more motivated to work and actually enjoy working. Employee wellbeing at Handed By is essential because this caring nature impacts the company's long-term effectiveness.

"So, if you take the parents as a basis and make them earn enough money to meet their basic needs, then the children can go to school,” Pim said.

Handed By contributes to the SDGs No Poverty, Zero Hunger, and Quality Education by providing direct employment to 300 weavers. Handed By doesn’t collaborate with giant factories but works with qualified weavers. They can work from home or meet up with colleagues to work together. Handed By guarantees that there is not one child involved in the production process. In these types of countries situated in the Far East, education is not the norm for children. Originally, most families own a piece of land and generate a basic income by farming. The extra income generated by collaborating with Handed By allows the children of weavers to go to school and improve their quality of life.

Noortje mentions that “the fact that we can give 350 families a better life by selling our products. That is very important to us.“

Handed By doesn’t just help people from the Far East, but also temporarily hires students at their Headquarters in the Netherlands who are having difficulties with their studies and would like to earn some extra money. They’ve also employed refugees who are not yet familiar with the Dutch language. By collaborating with Dutch colleagues, they get the chance to master the language. For this reason, Handed By also contributes to SDG Decent Work and Economic Growth.

By making baskets from recycled industrial waste and giving plastic a second life, Handed By contributes to the SDG Responsible Consumption and Production, and Climate Action. This industrial waste would otherwise have ended up in the environment.

Therefore, we can conclude that this flourishing organization, Handed By, creates wealth for many. It generates prosperity for the communities in which they work, thus not only profit for the business. Handed By contributes to a healthy, revitalizing environment rather than just doing less damage, reducing their environmental or social footprint. Furthermore, they provide circumstances in which their workers can develop and flourish, thereby increasing their wellbeing. In this way, Handed By's business innovation makes a valuable contribution to the world while providing beautiful products with a meaningful story for their customers. This is mainly due to the strong passion the current owners, Noortje and Pim, have for their company. They hope to be successful in taking this innovation further and engaging more people in their journey towards a healthy, strong, and thriving world.

Handed By is a company that produces and sells sustainable, high quality, and socially responsible products. Their products range consists of braided baskets, bags, and home accessories made of 85% recycled materials.