Yummus Foods is a mission-driven Guatemalan based business that focuses on selling food products in Guatemalan supermarkets. With a portion of profits from each product sold, they help bring proper nutrition to children in regular and chronic conditions of malnourishment in Guatemala. Their business model includes employing local as well as international individuals in economic distress to grow and harvest the required chickpeas to meet the increasing demand in Guatemala. Driven by the United Nations Sustainable Development Goals, Yummus looks to end poverty, end hunger, provide decent work, and bring clean water to people through several projects that aim to address all of these problems the world is currently facing.

Yummus is facing a challenge in starting the production of chickpeas in a country where beans, coffee, corn, and sugar dominate the agricultural industry. By showing local farmers how they could grow chickpeas in very arid climates while also making more money from chickpeas, Yummus is establishing formal local production. As of today, Yummus has local sourcing for 2% of their required supply of chickpeas and is working to increase the supply. Through an alliance with Wuqu’ Kawoq Maya Health Alliance, Yummus brings much-needed nutrition and a mix of ready-to-use therapeutic foods (RTUF), like Plumpy Butter and a meal made of a mix of beans, eggs, and rice, to provide proper nutrition to those in need. In the alliance, Yummus sends the monetary contributions from the sales of their products to Wuqu’ Kawoq to implement their own programs with resources including doctors, field educators, and community leaders who help improve the life and living stands of children and their families. Wuqu’ Kawoq’s ideology is to use science and social studies to use food, primary healthcare, and hygiene practices to end child malnourishment. 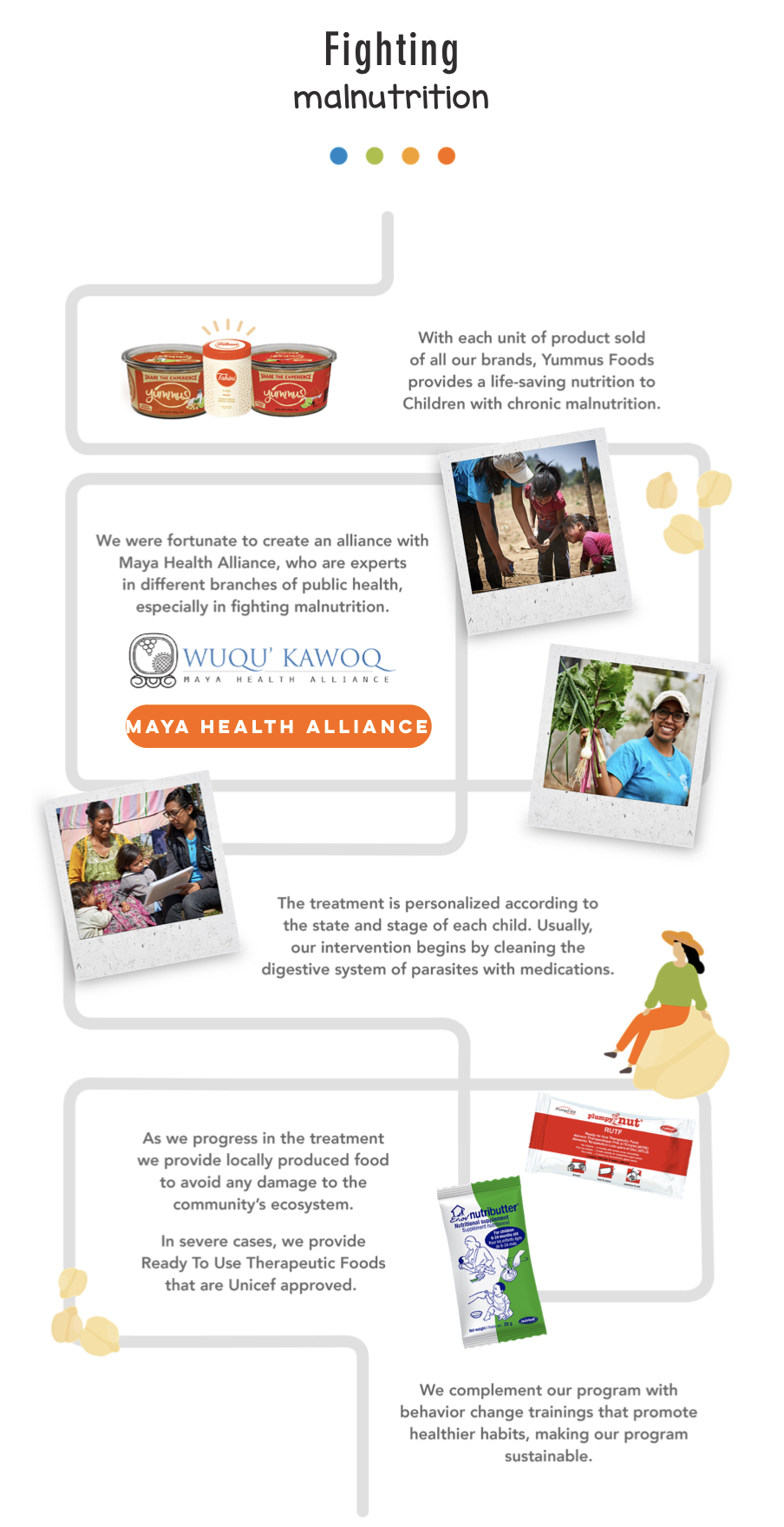 According to Siman, he and his partner were discussing potential options to start a business that could bring a profit while simultaneously bring a positive impact to its surrounding community. With a belief that all businesses should be socially responsible within their communities, Siman and his partner started looking at possible problems they could help mitigate. Living in Guatemala, they realized that one of the problems that contribute to many other problems is the lack of proper nutrition for children. After doing research, it was determined that the best possible way to venture into such a business would be through a “Buy One Help One” model. In part inspired by the TOMS brand initiative, Siman and his partner sought to create food-based brands to sell fresh dipping sauces and other snacks and then devote a portion of their earnings directly to helping a social cause, therefore, guaranteeing a sustainable impact model.

According to the World Food Program, Guatemala leads the charts in the chronic malnutrition of children 0-5 years old, occupying first place within Latin America and sixth place in the world. The problem of starvation in Guatemala is severe and is due to many factors that people have little or no control over, such as living in communities that are heavily isolated from developed cities, living in a climate not suited to growing local produce. This, combined with a lack of access to well-paying jobs, dooms Guatemalans to a society in which they have little or no access to some of the most basic human life necessities, such as proper nutrition and access to clean water. As a result, over 46.5% of Guatemalan children suffer from chronic malnourishment. This impacts the physical and mental performance of people, therefore, limiting their personal and economic growth potential.

Yummus Foods' "Buy One Help One Program" aims to reduce inequalities that should not exist between the isolated communities and the more developed cities in the country. Every ready-to-use therapeutic food (RUTF) unit purchased in any of Yummus’ brands guarantees that a child will be properly fed to help combat hunger and nutrition problems in the region. Each RUTF is fully personalized in accordance with the child’s current health condition and age. In the worst cases, Yummus provides RUTF Plumpy Butter to abruptly intervene in the chronic malnourishment of the child. As the treatment progresses, the children are transitioned to locally sourced foods in an effort to not damage the surrounding ecosystem. At the end of the program, Yummus and the Maya Health Alliance educate the parents on how to properly feed their children with the goal of changing the habits that were harmful to their children and to help them incorporate sustainability habits into their lives.

Yummus not only combats child malnourishment but also provides indirect jobs to local individuals in the surrounding communities. To grow chickpea, an arid climate is required which is plentiful in Guatemala. Even though the crop could be grown on a sustainable scale, people know very little about the benefits of growing chickpea. The result is that communities rarely grow chickpea and instead rely on cheaply sold grains such as beans, corn, and coffee. This causes an over-saturated market of these basic crops, which causes people to struggle to obtain a sufficient income.

Yummus Foods went to these communities to educate people on the benefits of growing chickpea in arid climates, including ease of growth, reduced water consumption, and incremental income from selling chickpea. As a result, Yummus was able to establish a chickpea growth program in some of the harshest climates of Guatemala, bringing opportunities to the people that were desperate for a better income.

When discussing the impact Yummus has had on Guatemala and their plans for their future, it was noted that Wuqu' Kawoq has served over 20,000 patients and with the support of Yummus, Wuqu’ Kawoq has reduced malnutrition by 35% in the regions where they work. Siman was very well aware that the "Buy One Help One" program could be extended beyond nutritional programs and include solutions to everyday problems that affect low-income Guatemalans, such as lack of access to clean water and sanitation, lack of access to women’s sanitation products, increasing reforestation in the Guatemala territory, and beekeeping efforts. At the moment, Yummus foods is in research and development to implement develop new products to bring more solutions to these communities. With the research, Yummus aims to attain the UN Sustainable Development Goals of No Poverty, Zero Hunger, Good Health and Well-being, Clean Water and Sanitation, Decent Work and Economic Growth, Responsible Consumption and Production, and Partnerships for the Goals.

Yummus Foods’ commitment to be a socially responsible enterprise has captured the attention of several customers looking to help those in need. By making the connection between people with resources and those in need, Yummus Foods achieved something remarkable: people can now buy products they usually consume while being assured they are helping someone in need without any additional effort. This bridge attracted many customers who do not have time to personally go to these places and make direct contributions but who still want to have a positive impact on their community through what they consume. At the same time, they created a meaningful brand that connects people to one another.

What Yummus Foods has done to bring back to their community is simply remarkable. While making a profit, their business model has allowed them to help those in need. Yummus has already helped reduce child malnourishment by over 35% in the communities where they provide help and is working to increase their impact. The source of most problems in Guatemala can easily be traced back to malnourishment during childhood. By giving more kids the opportunity to fully develop themselves into socially responsible individuals, they someday might help various communities across Guatemala and the world.

Yummus is a for-profit business with the mission of helping reduce the global inequalities of today’s society. Through the Buy One Help One initiative, Yummus is able to provide nutrition and food to children in need.