HeForShe is a United Nations campaign which advocates gender equality and brings men and people of all genders to join the conversation and take a stand with women all over the world. “Gender equality is not a women’s issue, it’s a human rights issue” – HeForShe Movement. In terms of PwC Canada, “the firm has made a commitment to mobilize 80,000 men globally – including employees and clients – to take the pledge over the next three years. Whether it’s challenging double standards, sponsorship or networking, a HeForShe pledge is a practical commitment to take action in the advancement of gender equity –at work or in the community.” – PwC Canada

Diversity and Inclusion at PwC Canada starts from getting recruited in university to becoming partner; it is very apparent in every level of the firm. The extended leadership team of PwC Canada include 8 women of a 24 people team with very diverse and multicultural backgrounds. Not only women, but the entire leadership team embodies D&I, with roles such as the Chief Inclusion Officer, Chief People Officer and Chief Culture Officer. The leadership team has set a goal of achieving “50/50 gender equity in partner admissions by 2020” – PwC Canada.

Under D&I, PwC Canada has employee-driven Inclusion Networks such as Black Professionals, Early Career Professionals, Parents @ Work, an LGBT+ network called GLEE, South Asian Business Network and many more. PwC hires more or less 50:50 in terms of gender but as women get to senior roles and years pass by, they take a step back. This is where PwC’s Women in Leadership (WiL) program comes in and gives women the tools and networking which teaches them about mentorship and sponsorship. Currently, there have been over 250 WiL graduates and they have opened up the program to their clients. PwC’s innovation reaches a global scale and PwC Canada has opened their arms in embracing diversity and inclusion and supporting organizations who do the same. 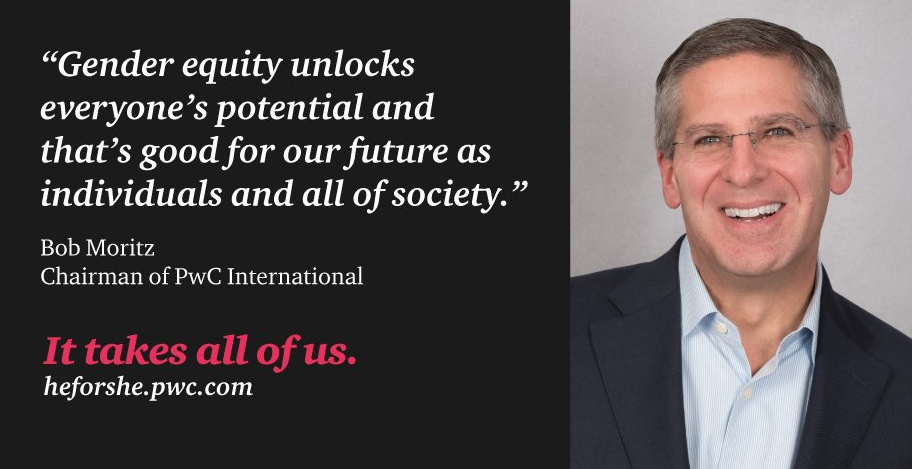 PwC has played a leading role supporting gender equity and it all started with the chairman of PwC International. At the 2015 World Economic Forum, the Chairman of PwC International announced partnership with HeForShe IMPACT 10x10x10. Which is comprised of 10 Heads of State, 10 global CEOs and 10 University Presidents, who came together to reach parity and gender equality all over the world. Being amongst leaders such as the prime minister of Japan and Sweden, CEO of McKinsey and Unilever, Presidents of the University of Hong Kong and Georgetown University shows PwC taking initiatives not just locally but committed to making a global impact.

James Spearing (VP of Workforce Planning, Resource Management and Recruitment) of PwC Canada, has been with the firm for over 15 years and is a big advocate of HeForShe within the firm. He says “It (HeForShe) is a global partnership for PwC – we’re one of the founding members globally which was a combination of either educational organizations like universities, or government not-for-profits or corporate. PwC fell into corporate and was one of the founding members, which is where it all started, but the energy around it continues every year”.

At PwC Canada, there is a wide array of employee-driven Inclusion Networks to help create an inclusive work environment. The first of these, set up back in 2006, was the LGBT+ network called GLEE, which stands for Gay, Lesbian and Everyone Else . As the pioneering network, GLEE has collaborated closely with PwC Canada’s D&I team for almost a decade, adding many more inclusion networks over the years. - The PwC diversity journey 2016

In terms of Inclusion Networks, he said “We’ve had this for a long time but really over the last few years have gotten a lot of traction, whether its Women Upfront or Black Professionals…what that has done is because it’s an Inclusion Network, its grown in its grassroots level, so you have all these individuals who either belong to a certain community or feel passionately about equality, so we have a lot more events (within and outside the firm)."

James Spearing (VP of Workforce Planning, Resource Management and Recruitment): “A lot of our diversity and inclusion activities are mostly market facing, we want to make sure our people are engaged and the best way to do that is to get clients involved, which potentially gets us different speakers, have larger events and our people can network more in the market."

In terms of gender equity and representation, at PwC Canada “One thing in Canada that’s been a focus recently is when our people are asked to be on a panel in the market, it’s not full of men and that there is at least one woman on the panel...but looking at HeforShe and more broadly, we want diverse panels whether that be cultural or any other dimension, we want it to represent the Canadian market place and not just a subsection of it.”

In addition to its support of HeForShe, PwC offices around the world have planned activities aimed at engaging every employee in support of diversity and inclusion. The Canadian firm has organized a series of events during Diversity & Inclusion Week to engage all of its 6,500 employees across the country to raise awareness and understanding around what they can do - both as employees and in their communities. – PwC Canada

PwC’s commitment to diversity and supporting the advancement of gender equity extends beyond D&I week. PwC regularly publishes research including "The Female millennial: A New Era of Talent", which is based on a survey of 8,756 female millennials (women born between 1980-1995) from 75 countries to find out how they feel about the world of work and their career.

Since 2012, the global Financial Services (FS) leadership has become more diverse. As well as a significant increase in the number of female leaders responsible for services to the largest global FS clients (to over 20%), five (Australia, Canada, India, Luxembourg and Sweden) of the largest 22 FS markets are led by female partners.

James Spearing: “For corporate Canada, I think the benefit is clear on why we are doing it, we are trying to promote women leaders and there is quality around equal pay for equal work... but internally, for me in a recruitment role, I want to make sure that when I’m out on campus or interviewing candidates for experienced roles that I’m talking about things PwC says we do in a D&I space, it’s actually what we do… some of the physical markers such as the panel and getting senior people in attached to this and that there is a lot of discussion at the leadership level. One thing that changed for us in the past is that our CEO used to be the Chief Inclusion Officer, but CEO’s are every busy and they are still very committed to diversity and inclusion but we have Mona Ghiami who is now the Chief Inclusion Officer and sits on the extended leadership team. One thing she has been doing with that team and also the team I sit on, was for every meeting, we have a “diversity and inclusion moment”. So it’s for someone to share something positive or maybe not positive that has happened within the firm and what we can learn from it.”

Through its D&I guided human capital processes, it has helped with talent attraction, recruitment, helping employees progress in the workplace and senior level women from “dropping-out”. Globally, PwC firms’ female partner admissions across the PwC network have increased from 23% in 2013 to 30% in 2018. Female representation in the partnerships has gradually increased from 13% in 2006 to 20% in 2018. This year, 51% of campus hires and 46% of experienced hires globally were female. In 2017, PwC reached gender balance on the Global Leadership Team for the first time.

There has consistently been a positive Inclusion score from our people, with 83% saying they believe PwC is an inclusive environment where individual differences are valued and respected, a rise of four percentage points since we first started to ask this question in 2011. - The PwC diversity journey 2016

1. PwC (co-authored by UN Women) has launched an innovative new curriculum called “Building your Gender IQ” to educate and engage men as gender equality advocates. By learning and understanding the issues surrounding gender equality, men can actively make a difference and support women.

2. There is also the use of the Global Inclusion Index to increase the number of women in leadership positions.

The PwC Global Inclusion is comprised of two core buckets - a gender diversity score and an inclusion score, each accounting for 50% of the total Index score. Based on a combination of quantitative (people analytics and annual global people survey results) and qualitative measures (namely the maturity model), the Index provides a score out of 100 for each of PwC’s 21 largest member firms. These scores are then averaged to generate the Global Inclusion Index score.

3. Raise the global profile of HeForShe with PwC people, clients, and communities. PwC will lend their full global footprint to HeForShe, driving awareness and action within and beyond PwC. Men are encouraged to commit online (take pledges), and take specific actions towards gender equality. 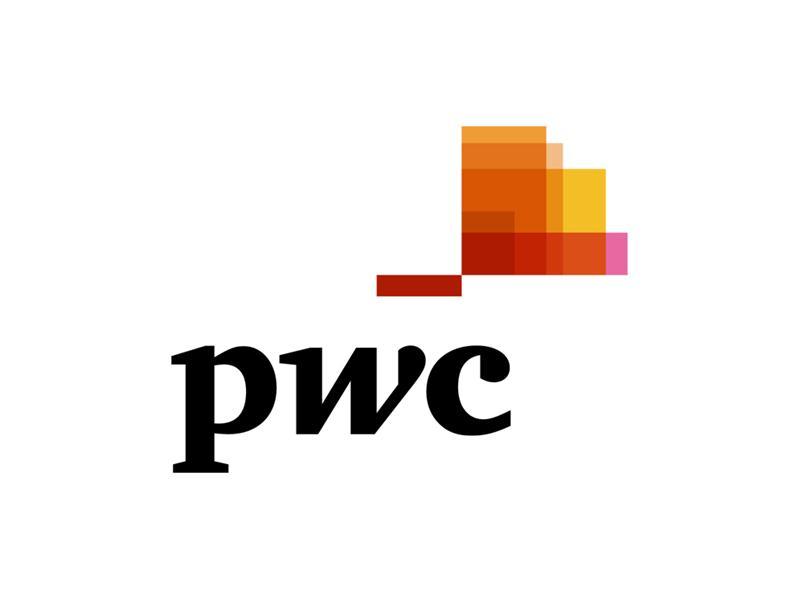 Diversity and Inclusion (D&I) is one of PwC’s global pillars and PwC Canada has taken a strong stand for women empowerment and employee diversity in the workforce. This includes highlights such as supporting the United Nations HeforShe movement and Inclusion Networks. PwC Canada has not only adopted D&I in terms of their corporate social responsibility, but has engrained it into their recruitment and the workplace every day.