E-bikes have an electric engine, so they are silent. Because they emit zero carbons, they are eco-friendly. They allow cyclists to move around the city easily, avoiding traffic issues without contributing to pollution. The e-bike has a brushless electric engine (a high-tech model) added to its rear wheel. The battery is included on same frame and supplies enough energy for a 30 km per charge of autonomy. Cyclists can use engine power, pedal power, or both simultaneously. Using the engine, cyclists can reach speeds of up to 20 mph (32 km/h). The e-bike is charged by plugging the battery's charger into a 220v home plug. It's basically the cheapest motorized vehicle available these days.

Currently, EMOV offers many different models. The main one is called Brina 1.0, and it includes a brushless/gearless engine of 750 W - 36 V power, Lithium 15.6 A batteries, Shimano shifter with 21 gears, and LED lights...just to mention some of its features.

Main innovation is about the frame. There is not other electric bike (or regular bike) like this one, with this frame. Batteries and the whole electronic system are on it. There are also LED lights on it, white for the front and red in the back. And the frame can also carry many different accessories, depending on the rider's preference.

The electric engine is on the back wheel, which means there no transmission is needed. It works silently.

Because of this particular frame and the whole design, the Ministry of Science, Technology and Productive Innovation (main official entity in Argentina on this matter) included the Brina 1.0. Electric Bicycle as a finalist in the 2013 Innovation Book.

Now, the company has received many awards from different agencies. La Plata City Hall and by the Honourable Chamber of Deputies declared the bike to be of public interest.

If you ride this bicycle, you will notice that the company did really well. The final product, the outcome of the company's innovation, works great. It is about the whole bicycle. You will feel it is light and quick.

The bike's quality deserves special mention. All of its components are from leading suppliers. They also have certifications from some of them, like Shimano (which only gives this kind of certification for 100% reliable companies). Its users give outstanding feedback about the product (an important source of new customers is the testimonies of current users).

The entrepreneur Gabriel Muñoz used to import petrol engines, and he wanted to added them to a bicycle. Even when these bicycles seem to pollute too much, they are seven times less polluting than a car. They are also more efficient (because they are smaller and occupy less space than a car), and they are good for people's health because they promote exercise. And he was happy about all of this. But he wanted to do a 100% sustainable product.

It was around 2009 when a customer of his Chinese engine provider recommended electric ones to Gabriel, and he was interested and brought them to Argentina. By that time, he thought he had to design a special bicycle according for that engine. And that was the beginning of the bicycle.

He saw immediately that the outcome would be good. The bicycle worked well. It was silent and didn't produce any carbon emissions. It allowed people to move around the city without adding to traffic issues and in an eco-friendly way. Gabriel became more and more excited about the bike's possibilities, and he never stopped until he achieved the the great bicycle he wanted

Even though EMOV has a huge social and environmental impact, it is still a for-profit business. It is not a philanthropy. The company sold its first bike around three years ago, and by now it has sold around 500 bikes. This winter season in Argentina, it was selling around 25 per month. That's more than the average store sells, especially considering that Argentina's economy is officially in recession. Prices are around $2,000, depending on the model.

The company has a factory, a store, partners, and employees. It pays salaries, and it still has a profit. The company has been investing it itself. The store is full of stock, and the initial investment is already covered.

It is an scalable business, as it has already shown. The company continues to expand its quantities of different models. It is working on new ones that will probably come to light next year.

Business benefit has two parts. One is connected with the business, the industry. It is a new concept in bikes. It is a successful innovation that really works. It has been thoroughly tested through five years working on a revolutionary design, plus three years with the bike on the streets. So we know that this kind of frame, this kind of bike (with an electric engine on its wheels and with batteries on its frame) works, and it works really well. Manufacturers and users will improve with this.

The second benefit is for human health, city improvements, and health of the planet.

Both benefits are increased if you consider that for designing, manufacturing, and selling its bikes, the company follows the values and principles that it believes in, and that means more benefits. It believes in innovation (not just a bike, but a unique bike that is original and innovative). The company believes in generating local jobs and using local materials (only when its quality meets the standard it defines). It believes in the importance of ecology (its bikes replace cars, so the difference in the carbon footprint is huge). And the company makes its best effort to get all of this at the best price possible (the price is reasonable considering production costs and quality, and profit is limited by policy).

As we said, EMOV's mission is to "propose ecological transport solutions with less carbon footprint at the lowest cost for a personal vehicle in the world with high quality and design standards."

These personal vehicles mainly are bikes. We do not have to be doctors to know that cycling is great for our health and well-being. It is very good for the cardiovascular system. Pedaling is not good just for our body, but also for our mind. With your EMOV bike, you will feel the air, and the benefit of pedaling in open spaces. And it is very easy to incorporate it into your daily routines. You can use the engine on the bike to go to your office and to cover long distances. Cycling is great for your health. It reduces bad cholesterol, reduces depression (as it releases endorphins), reduces infection risk (as it strengthens the immunological system), protects your knees (as the weight lays on the seat), and improves your whole body (not just your legs). It is good way to burn calories. Also it helps us avoid frustrations associated with driving a car (like being stuck in a traffic jam or spending money on petrol) or with using public transportation (like paying the tickets or using it on rush hours). So, truth be told, cycling is really good for our health and well-being.

Half of the world's human population currently lives in cities, and it is going to be 60% by 2030 (according to the United Nations). Traffic issues (congestion, traffic jams) are massive all over the world. It is crazy the amount of cars in some cities. Seventy-five percent of carbon emission comes from cities. There are one thousand million cars in the world. To face this dramatic reality today, the bicycle may be the main solution that governments, cities, and society in general should consider. They are designing cities with cycle tracks all over the world. Bicycles change the cities and improve them.

Bicycles occupy much less space than cars. It might be the only way of transport these days (without considering walking, of course) where you can be sure how much time the journey it going to take. EMOV's bikes are personal vehicles that cover your transport needs. Having a bicycle allows you to move in an economical, healthy, and eco-friendly way. It is much more efficient to transport a person in a 20- or 30-kilo bike than in a 1000-kilo car. That is why car manufacturers are interested in bicycles too. And that's the reason why lots of cities in the world have a lot of bicycles (China has 250 million bikes, for example). Additionally, there is no noise pollution with electric bikes.

Finally, bicycles help with the climate change struggle. Since 1990, carbon emissions increased around 50% (according to the United Nations). Transportation is one of the main sources of these emissions (they could represent 20%, 30%, or even more, depending on the city). Bicycles can help significantly with this issue (if their use increases by a large percentage, carbon emissions will reduce by a large percentage too).

First of all, the carbon footprint to manufacture a car is much larger than one to manufacture a bike. EMOV bicycles do not produce emissions, as their engine is electric, and there is not a waste of energy, like the one produced with petrol engine. From this point of view, it is also superior to the bikes with petrol engines. Finally, we should say that its brakes are able to recover some of the energy to charge the batteries.

To sum up, we should say that there are lots of improvements for people, society, and the environment with the EMOV electric bicycle. 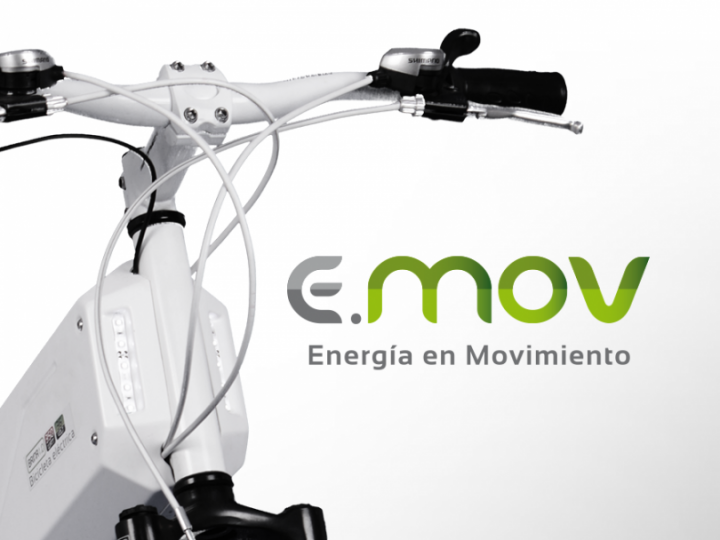 As EMOV mission says they "propose ecological transport solutions with less carbon footprint at lowest cost for a personal vehicle in the world with high quality and design standards." It is a young company founded in 2009, focused on electric bikes. It already has many different models of electric bikes and other electric vehicles. Its model Brina 1.0 is the first ebike in Latin America, and it has a remarkable stylish design and new features. It works with lithium batteries and a rear motor. The company is in La Plata, but it sells its products all over the country. It is ready to export its products all over the world (it already has orders from many countries). We are talking about a healthy and profitable company. Its business runs so well, and it sells more than the average bike store. The quality of the product is outstanding. All bike components are from leading brands. It supports its advertising campaigns on users' testimonies, and it developed a direct sell system where current users recommend the product and bring in potential new customers.