Everyone Deserves a Second Chance

All Cleaned Up Scotland

ACU's ethos is to create and promote a culture of tolerance and inclusiveness by providing opportunities, work experience and sustainable employment for people with convictions and multiple barriers to employment, whilst at the same time delivering quality services at competitive prices.

They describe their work in the following way “Apex Scotland’s work is about reducing re-offending, promoting desistance, tackling deprivation and making communities safer. In all that we do, we make best use of our resources to bring lasting value to individuals and society”.

According to ACU’s Ally, in terms of social innovation All Cleaned Up Scotland, see themselves as “unique in the fact that we are a commercial company that gives opportunities to ex-offenders and individuals with multiple barriers”.

While ACU exists to make a profit, they focus on providing opportunities for people in danger of being 'left behind' in society. Many services wish to help people with barriers but ACU provides a real opportunity for personal enhancement, and their 8-week training course can lead on to work with them if the employee performs well.

Seeing the 17 Sustainable Development Goals for the first time led Ally and John to think what Goals fit their enterprise. They highlighted SDG 4- Quality Education - reflecting the education they provide to clients, finishing with a BICS qualification.

In order to address the Scottish Government's 'Fairer Scotland' Action Plan, which aims to expand access to vocational training opportunities and ongoing personal development, ACU offer their employability programme not only to clients, but also to existing and new staff members. This demonstrates their belief that better trained staff that are more knowledgeable will have a far better chance of maximising family income, which can improve life chances and the lifestyles of the ex-offenders and their families, thereby reducing poverty.

They see it as a cycle. Having parents in decent work encourages children to work in the future with the hopeful outcome of reduced poverty and improved well-being. “Local jobs to local people is our focus. Local work. Local people. Local jobs. The local community. Money in the pockets of local people, to spend in the local area”. 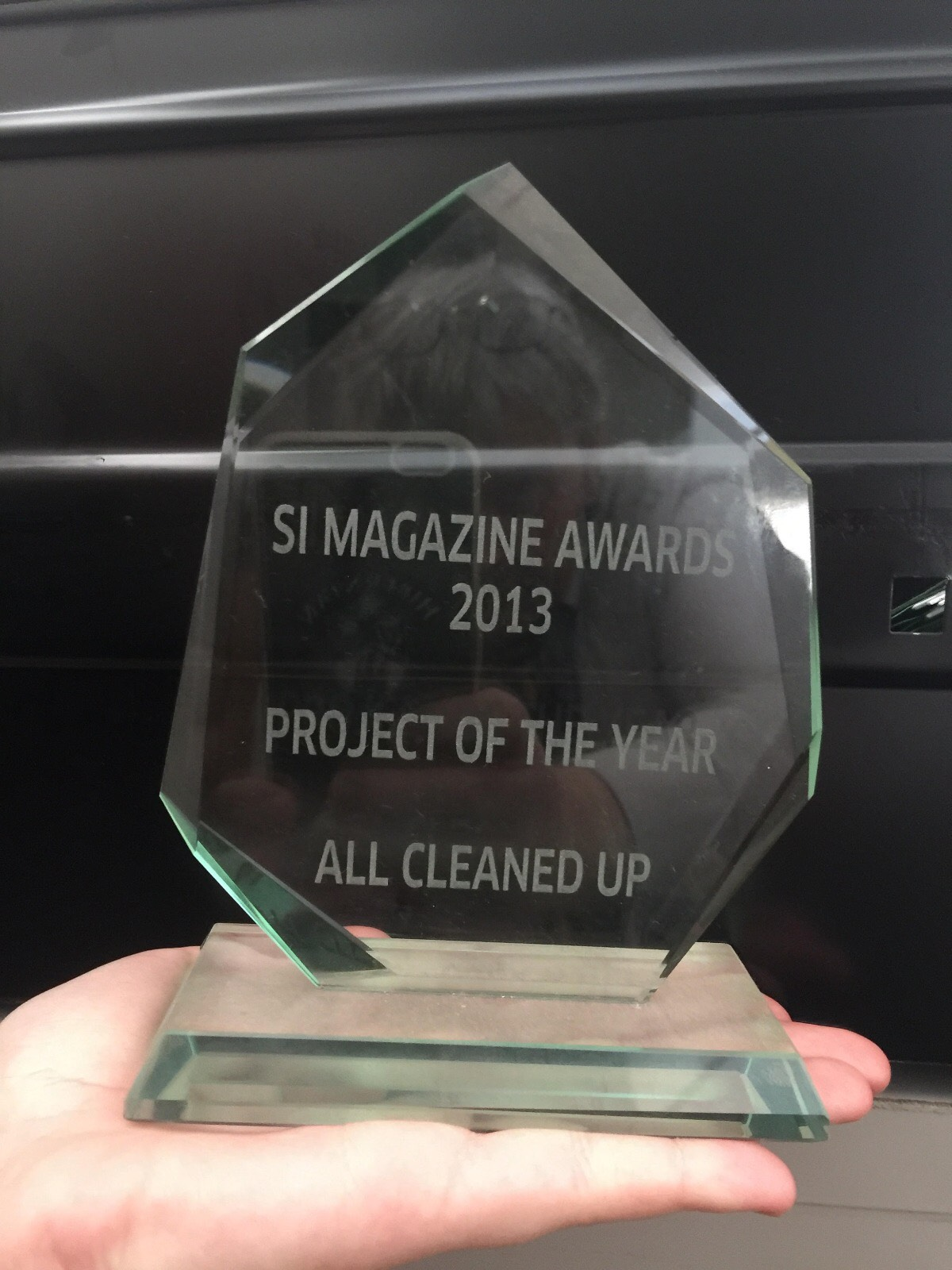 The business idea was first thought of by Brian Robertson Fern in 2011, who noticed a gap in the market. The inspiration behind it was to be a “link” between people deemed disadvantaged, or at risk of being disadvantaged, and the employment market. However, his vision was lacking a business plan and did not get very far. ACU has gone through multiple changes since inception in 2011 but has never strayed too far from its original mission. However, with the takeover in 2016 by a new team consisting of Ally Scott (Project Development Officer) and John Friary (training manager) the business has flourished.

The inspiration evolved when Ally took over because for him the people are the inspiration. At first, they set up two main objectives: to make a profit for Apex Scotland, and to create employment opportunities for individuals who have struggled to find mainstream employment due to labour market barriers. Ally thinks the inspiration was “fairly split" between the need to diversify income stream and bring in different revenue streams, and the need to capitalise on the organisation's biggest strength - its people. He went on to say that, "the people they help are on their last, or second last, chance and they know that if they don’t make the best of the opportunity, then it very likely isn’t going to come round again".

While the idea may have been transformed into an enterprise rather quickly, it has taken its time learning lessons. When first started, its lack of structure, or what little structure they had, did not allow them to make the most of the income they generated. They are just now coming out of a period that has taught them valuable lessons in a short space of time.

Going forward in 2018, ACU have established four main principles in order to shape the future of the business. These are a commercial orientation, and focus on employability, community, and recognition.

Overall, the impact from All Cleaned Up Scotland is both nationwide and particularly prominent in their local area. Not only does ACU have a positive impact on the ex-offenders, but it also has multiple benefits for the local community. “Local people mean local jobs, which means the money is put back into the local area”.

On a different level, All Cleaned Up Scotland understand that their client’s situations will not change unless political changes are made. They have been campaigning for introduction of the ‘ban the box’ Act of Parliament. This box on job applications, asking applicants to declare whether they have a criminal conviction, is seen as discriminatory, and can prevent ex-offenders from being considered for a job opening. Some applications have a box that requires you to say if you have a criminal offence, and if ticked 'yes' the system automatically rejects the application. ACU are campaigning to abolish this box to give a fair advantage to all. Some argue that removing the box prevents employers from knowing the full history of their potential employer, while others say it is the ex-offenders' right to have privacy , and that once an offender has paid for their crime by serving a sentence, they should be allowed to re-join mainstream society.

Identified by Ally, the main benefits of this enterprise consist of two key areas. Firstly, as a commercial and industrial cleaning company, they are able to generate an income, with profits gift aided to Apex, which are then reinvested. Secondly, they are an employability service providing ex-offenders the opportunity to gain employment and qualifications, which otherwise would not be available to them because of their previous conviction.

Currently UCU operates in Edinburgh, East Lothian, Stirling and Falkirk. Ally believes the enterprise has real potential for growth, and thinks the model has a sustainable future. An example of this is the potential of a new contract they are pursuing that could generate an income of around £175,000 to £200,000, based on cleaning 180 houses per year. Having peaked at around 40 employees, but with a current 17, the new contract can allow them to grow again.

All Cleaned Up has gained rewards and recognition for their work as ‘Best Newcomer’ in social enterprise as well as the British Standard accreditation they require for health and safety, environment and quality practices. In the new financial year, they are also aiming to be a recognised living wage employer (paying more than the statutory minimum wage), have better trained staff with more knowledge to benefit the enterprise.

Situated in one of the most deprived parts of Edinburgh, social problems occur very often for All Cleaned Up Scotland. They pride themselves as the “help to transforming people’s lives”. They achieve this by removing social barriers facing their clients. They see the training and education as giving ex-offenders the opportunity to gain gainful employment. By offering additional support services, they believe they are equipping clients with the knowledge and skills to overcome prejudice they face. Within the last year, All Cleaned Up Scotland has helped roughly 60 people through their training program, but have helped many more through an open door policy not recorded as training.

ACU has also explored improvement of the environmental aspects of the business. John and his team have understood that sustainability is the future, so gaining a prestigious International Organisation for Standardisation (ISO) 14001 Environmental Management to add to their growing collection of awards is a future goal - going to show that despite being a social enterprise, they find themselves in the front line of Environmental Management. 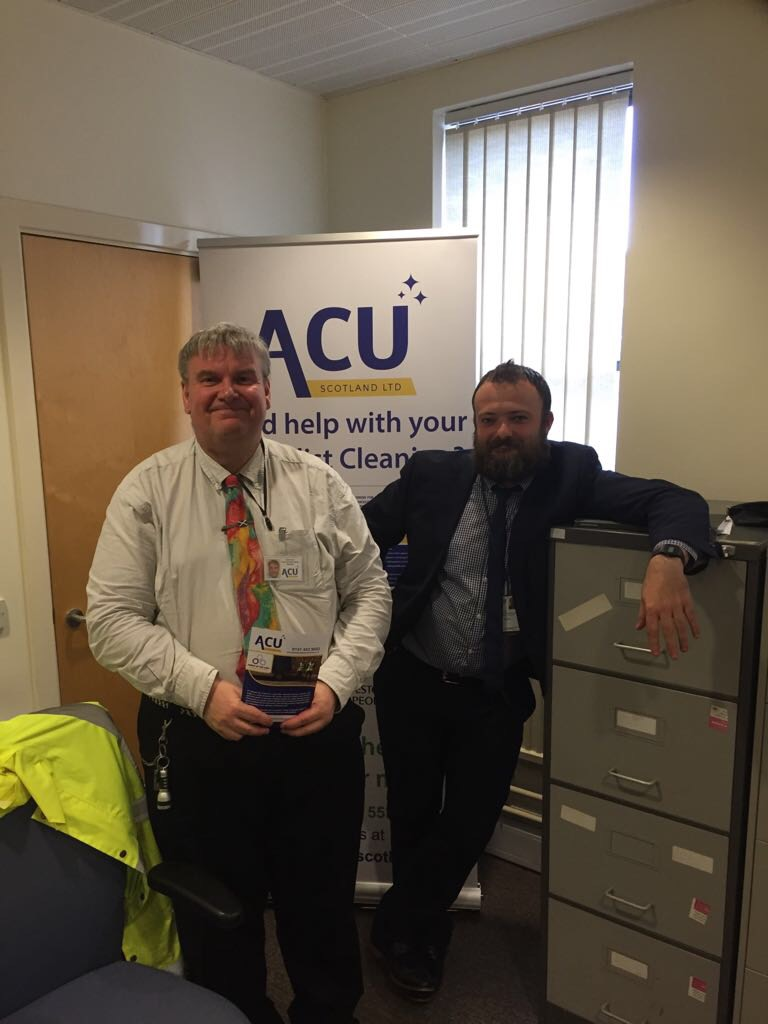 All Cleaned Up Scotland

All Cleaned Up (Scotland) Ltd is a social enterprise created by Apex Scotland, based in Scotland’s capital city of Edinburgh. ACU aims to create real jobs for those traditionally excluded from the labour market. First opened in 2012 they have grown substantially, and thanks to an immense effort by the ACU team and support from the key Apex staff, they have been able to win and sustain contracts by delivering a professional standard cleaning service.

By targeting ex-offenders, ACU give clients the opportunity after release to gain skills and knowledge allowing them to go forward into the world of work. With income from Edinburgh City Council, they offer ex-offenders an 8-week course vocational training program, with the goal of giving ex-offenders valuable work experience, while in the process allowing them to acquire a vocational cleaning qualification, called BICS. ACU are unique in that that they are a commercial company that gives opportunities to ex-offenders, and ‘one of a kind' because there are no others like them in the region. However, it has not been as simple as taking people straight out of jail into employment, which is the way they originally wanted the company to work! ACU clients have multiple challenges to overcome, not least addiction issues.